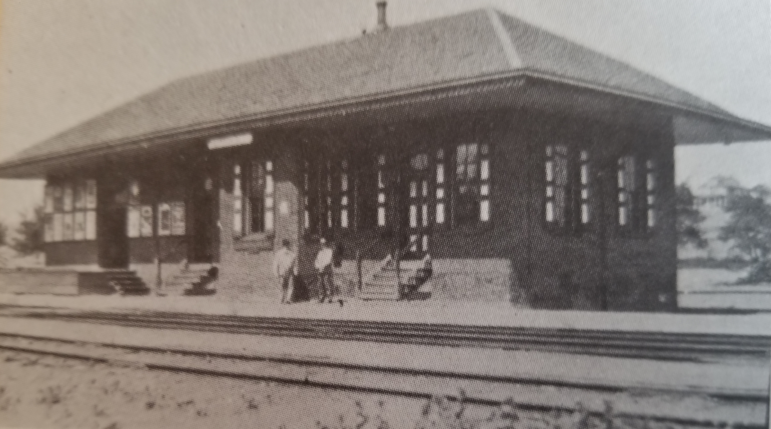 The Hellertown train station, which stood near what is now the intersection of Depot and Front streets, was demolished some time after this undated photo of it was published in the borough’s 1972 centennial booklet. (FILE PHOTO)

Although some details have faded over the last 75 years, Kathryn Cawley fondly remembers the weekly journey she and her family would take to visit family in the Hellertown area. Along with her mother and some of her eight brothers and sisters, she would hop on the trolley near her childhood home on Broadway in Fountain Hill, riding approximately three-and-a-half miles to Walnut Street in Hellertown. From there, they would either walk the rest of the way along the adjacent railroad to reach her mother’s parents in Leithsville, or continue even further to Bingen to visit her aunt and uncle, which she approximates was an additional one-and-a-half to two miles of travel, one-way. She particularly remembers the “beautiful lights” near Wagner-Knecht Grist Mill Park, which she estimates were nearly brand new at the time.

Those same lights still stand, newly-restored by the Hellertown Public Works Department on the Saucon Rail Trail (SRT), which Cawley was walking six days a week with friends from Christ Lutheran Church of Hellertown until COVID-19 began spreading throughout the country. The popular trail covers nearly seven miles, beginning near the Thomas Iron Works site off Bachman Street in the borough and extending south through several local parks including Water Street and Grist Mill. It then crosses the Saucon Creek twice before winding through Upper Saucon Community Park, passing alongside Tumblebrook Golf Course and coming to an end just south of the Southern Lehigh Living Memorial Community Park in Coopersburg. 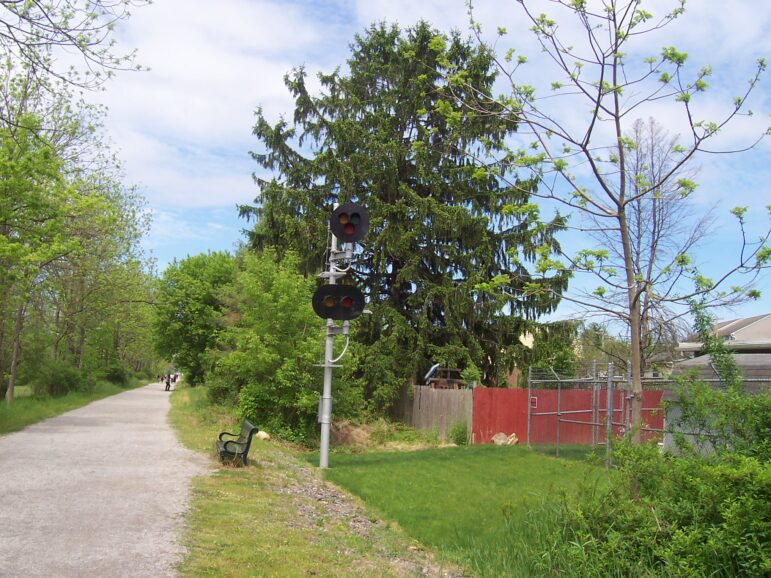 A train signal still stands near the Walnut Street trail entrance, having been recently restored by the Hellertown Public Works Department.

While the first phase of the SRT was only completed in May 2011, the history of the path dates back more than a century, to when it was a part of the North Pennsylvania Railroad (NPRR). The railroad, which would later become well-known as the Reading Line, provided both freight and passenger service throughout eastern Pennsylvania through the use of steam engines, although these would be converted to diesel in the 1950s and 60s. By the 1970s, many railroad systems in the Lehigh Valley and surrounding areas were suffering from financial distress, with some filing for bankruptcy. In 1976, the remaining companies were consolidated by the federal government as the appropriately-named ConRail service, which would quickly become part of SEPTA. In 1981, SEPTA chose to discontinue passenger cars on the line (though service to Hellertown had ceased well before then) and in 1984 the railroad was closed for good. 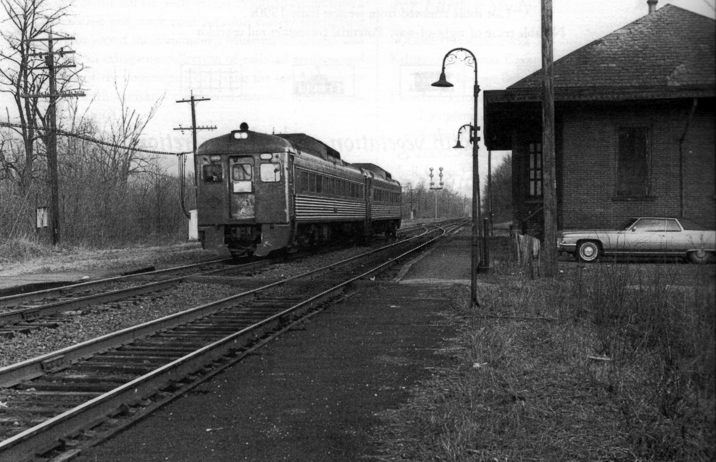 A photo of the former Hellertown train station during its last years of existence in the 1970s. (FILE PHOTO)

As SEPTA still owned the land, an agreement was reached in 2009 on a 30-year lease to the municipalities that the abandoned tracks stood on. A similar plan is currently in place for the Upper Bucks Rail Trail (UBRT), which will connect to the southernmost point of the SRT in Coopersburg and extend roughly three miles south to Veterans Memorial Park in Richland Township. Groundbreaking on the UBRT took place in August 2019 and was expected to conclude this summer, although it was not immediately clear if completion may be delayed due to COVID-19. A plan to connect the SRT north to the South Bethlehem Greenway also exists, although negotiations with right-of-way owner Norfolk-Southern have delayed progress on it. The Greenway currently extends nearly two miles from Union Station–a former train station on Bethlehem’s South Side–alongside Rt. 412, ending in Saucon Park.

While the future of the Saucon Rail Trail continues to look bright, one can wonder if its history is often overlooked by the many folks who enjoy walking, jogging or biking it to this day. With the summer rapidly approaching and people feeling antsy due to two-and-a-half months of staying home, the trail will surely continue to be a popular destination for folks looking to get outside and enjoy nature. Cawley said she looks forward to getting back on the trail with her friends (“when it’s safe”) as well. She enjoys the wildlife she encounters, including “deer, foxes, egrets…even the fish in the (Saucon) Creek.” In the 25 years that she estimates she’s regularly walked Hellertown, she’s conversed with folks from all walks of life, the vast majority of whom she enthusiastically describes as “so pleasant!” Surely, she and much of the local community can attest to the role that the Saucon Rail Trail and its railroad predecessor have both played in bringing people together; something that’s happened for generations, and will for generations to come. 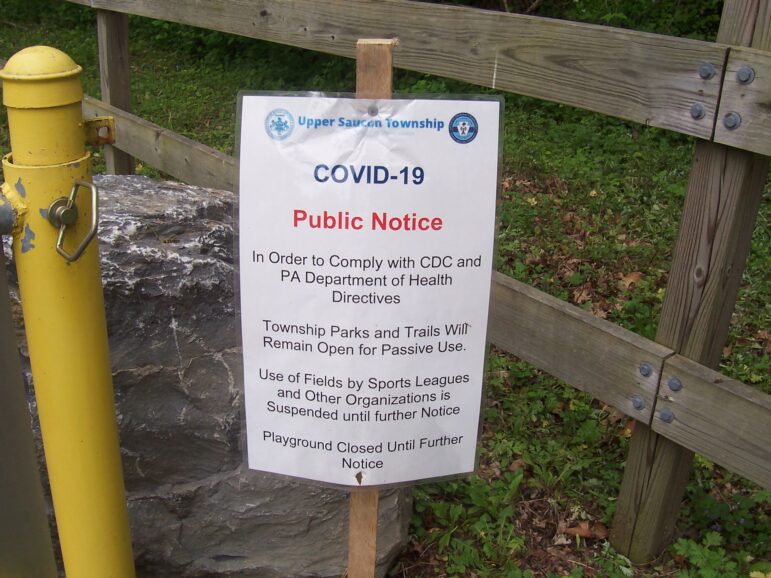 A sign of the times, a public notice on COVID-related restrictions is attached to a post along the Saucon Rail Trail in Upper Saucon Township. 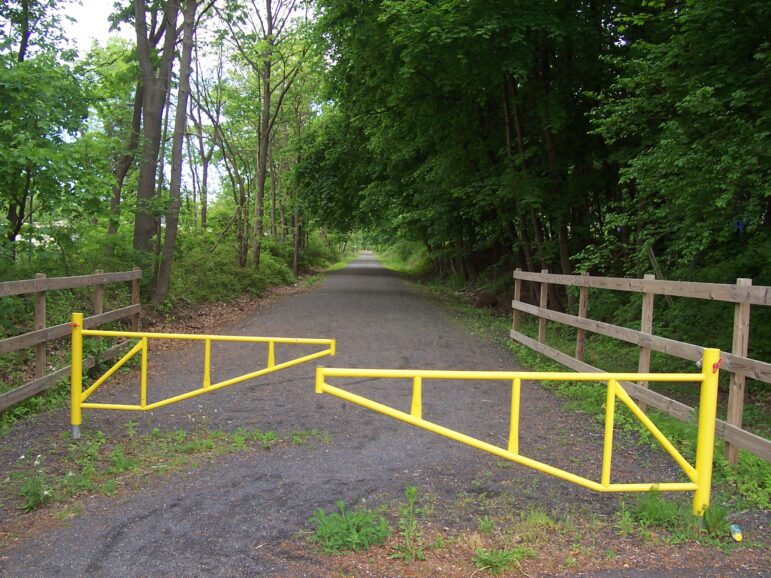 The entrance at the southernmost point of the trail in Coopersburg. 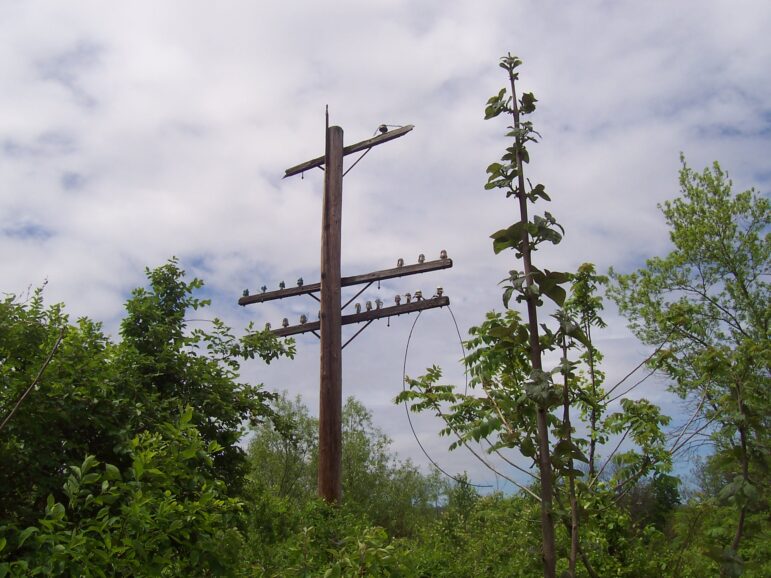 An abandoned telegraph pole near the West Saucon Street trail entrance in Hellertown. 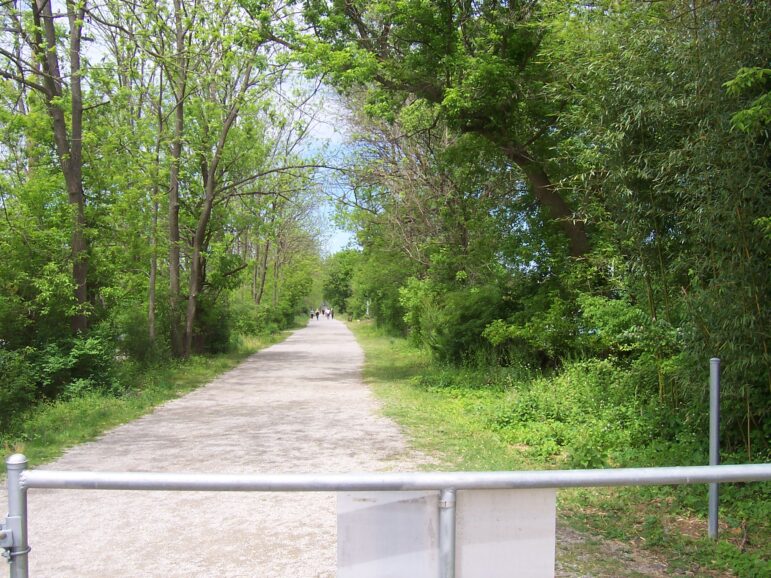 The view north toward Water Street as seen from the Walnut Street trail entrance in Hellertown.