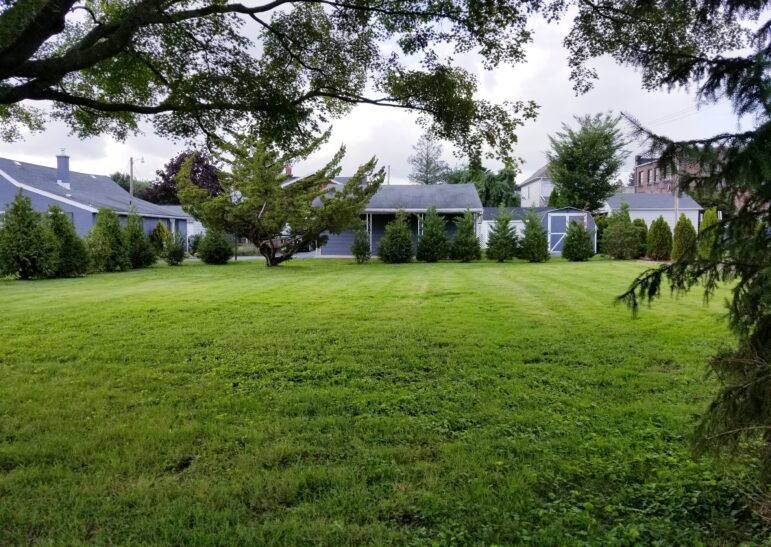 The large lot at 85 Division Street in Hellertown has been subdivided into three separate parcels. A new single-family home is proposed for construction on the center lot (pictured).

Editor’s Note: This story has been updated to correct errors a previously published version included. We apologize for any confusion the original article may have caused.

A proposal to build a single-family home on a subdivided lot at 85 Division Street near the center of the borough was discussed and ultimately tabled at the Aug. 11 Hellertown Planning Commission meeting.

David Harte of GLP LLC in Bethlehem presented a blueprint featuring plans for a house on the lot near the corner of Division and Harwi streets, which is behind the 700 block of Main Street.

A minor point of contention regarding the proposal was a request for a waiver due to the width of the street that borders the property. Division Street is less than 30 feet wide, which under the borough zoning code makes it too narrow to be built upon. The waiver request was approved, with commission Chair Phil Weber casting the lone ‘nay’ vote.

Weber also opposed Harte’s request to defer installation of sidewalk–which doesn’t exist at the property–citing his concern about a potentially dangerous setup for pedestrians.

Weber said he thinks the lot is too small to support the proposed home; an opinion with which Harte disagreed.

Harte told planners the newly-created lot’s size is comparable to that of some residential lots in the borough’s Mountainview neighborhood.

“The new vacant parcel (to be used for constructing a single family home) will be larger than the average lot size in Mountainview,” Russo confirmed. “Some lots in Mountainview are 6,000 square feet and some are larger.”

Commissioner Don Werkheiser, who said he lives “right down the street” from the lot, also aired doubts about the plan. He said that “in the slightest, smallest rain” a garage behind the lot on Harwi Street gets flooded.

Following their discussion, the planning commission voted to table its decision regarding the plan for 85 Division Street pending receipt of an updated plan that is in accordance with an engineering review letter.