It may be overstating it a bit to say that Hellertown is now “big in Japan,” but the borough does feature in a report about mail-in voting in Pennsylvania that recently aired on a Japanese public television network’s national news program.

The NHK (Japan Broadcasting Corporation) news crew visited the borough to document how all Pennsylvanians now have the ability to vote for president by mail, how some are exercising that right and how volunteers are working to educate residents about voting by mail.

To view the segment, which does not include English subtitles, click here. The story about Hellertown begins at approximately 18:30 in the broadcast and includes two segments.

In one scene, Democratic voter and borough resident Bill Broun is seen filling out a mail-in ballot before dropping it in a mailbox outside the Hellertown post office and putting an “I Voted” sticker on his sweatshirt.

In this scene from a Japanese television news report about mail-in voting in Pennsylvania, Hellertown resident and Democratic voter Bill Broun deposits his ballot in a mailbox outside the Hellertown post office.

Broun, a local Democratic Party member who last year helped found the group Saucon Democrats, said he believes producers were interested in filming in Hellertown in part because Northampton County is considered a bellwether in presidential elections.

Producer Yuri Osugi confirmed that in an email to Saucon Source.

“We picked not Hellertown specifically, but Northampton and (the) surrounding area due to the fact of swung voting results from a past couple of presidential elections,” she said.

“Many Japanese are paying attention to the upcoming election because of US-Japan’s tight relationship,” Osugi explained. “In the program we discussed about the forecast of (the) upcoming election with COVID-19’s impact. The first half is talking about the public opinion divisions caused by COVID, business (economy first), social distancing and mask-wearing and such. The second part is about the unusual voting activities such as mail-in ballots and (the) related legal battle by both parties on how to count the ballots and running the polling stations and such.”

One of the reasons Northampton County is receiving so much attention this election cycle are its historical voting patterns. In all but three presidential elections over the course of the last century, a majority of the county’s voters have chosen the winning candidate.

“The (Japanese television network’s) approach was definitely very non-partisan and like what you would expect from public television here, too,” said Broun, who teaches journalism at East Stroudsburg University and ran unsuccessfully for a seat on Hellertown Borough Council last year.

“They were very sweet,” he said of the New York-based news crew that filmed him. “They gave my son a little plush toy that’s kind of like the equivalent of Big Bird or Oscar.”

Documenting the local Democratic Party strategy to push voting by mail in communities like Hellertown was another part of the NHK story, which depicts volunteers wearing personal protective equipment because of the COVID-19 pandemic going to door-to-door.

When one volunteer asks a resident whether he plans to vote by mail in the election, he replies in the affirmative. 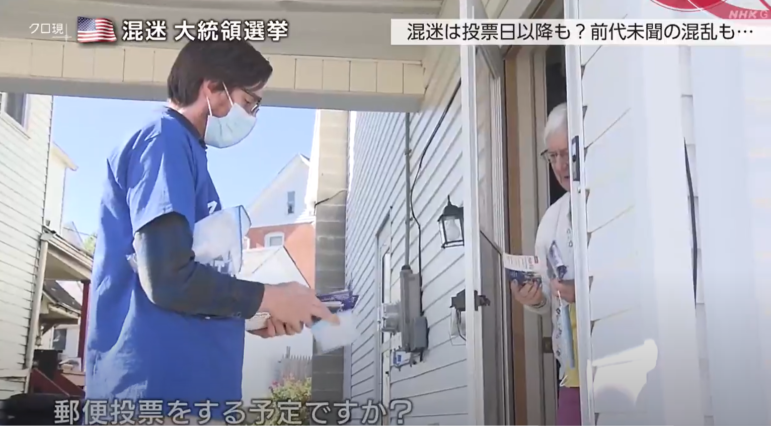 In this scene from a Japan Broadcasting Corporation (NHK) television news report about mail-in voting in Northampton County, a Democratic Party volunteer provides a Hellertown resident with information about the process for this election.

Northampton County Democratic Party chair Matthew Munsey was part of the group filmed canvassing a Hellertown neighborhood, and was interviewed for the story.

“I think they were very charmed by Hellertown,” said Broun of the Japanese news crew. “They thought of it as a typical American town.”

Both Hellertown borough and Northampton County as a whole narrowly backed Donald Trump in the 2016 presidential election, in spite of a sizeable advantage Democrats hold in terms of voter registration in both places.

Most Northampton County residents have by now received their mail-in ballots, or will be receiving them shortly if they requested them, according to election officials.

Each ballot comes with a set of detailed instructions, which voters are strongly encouraged to read carefully before beginning the process of casting their ballot by mail.

In addition to mailing them to the county’s Office of Elections and Voter Registration, voters may also place their ballots in one of several secure drop boxes the county has set up.

In order to be counted, each ballot must be sealed inside an inner (or “secrecy”) envelope before being placed in an outer envelope for mailing or dropping off.

Sample ballots and other information related to voting in the 2020 presidential election may be found on the Northampton County Voter Registration office website.

The deadline to register to vote in the Nov. 3 election is Monday, Oct. 19. Registration may be completed online, by mail or in person.

The last day to request a mail-in ballot in Pennsylvania is Tuesday, Oct. 27. Ballots must be postmarked by Nov. 3 and must be received by Friday, Nov. 6 at 5 p.m. in order to be counted.

Ballots may also be returned in person to the county election office in Easton by Nov. 3.

Individuals who requested a mail-in ballot and no longer wish to vote by mail must bring their ballot and its return envelope with them if they intend to vote in person, in order to have them destroyed (or “spoiled”) by the Judge of Elections for their precinct. If they do not have it with them, they will be required to vote via provisional ballot.

Polls on Election Day in Pennsylvania will be open from 7 a.m. to 8 p.m. To locate your polling station, visit the Department of State website to use their search tool.