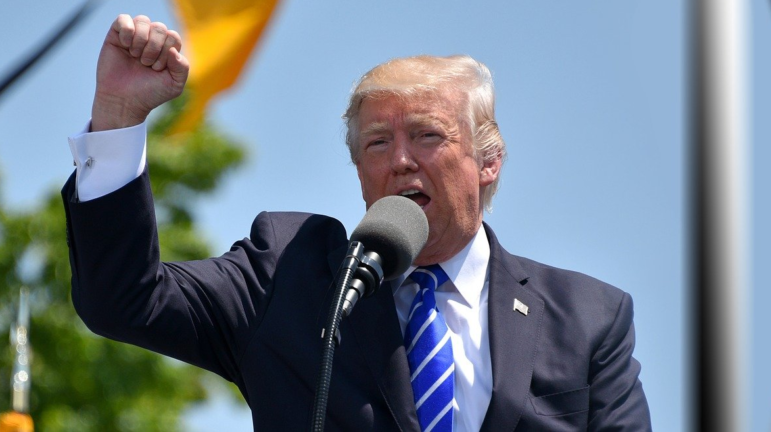 U.S. President Donald Trump will visit the Allentown area as he campaigns for re-election Monday. The president is scheduled to speak at a rally at HTI in Hanover Township, Northampton County at 11 a.m. (FILE PHOTO)

In the waning days of the 2020 campaign season, President Donald Trump will make a campaign stop at a business in Hanover Township, Northampton County, near Allentown.

The Trump campaign confirmed late Saturday that the president will deliver remarks at a “Make America Great Again Victory Rally” at HTI, a plastics manufacturer located off Airport Road, on Monday, Oct. 26 at 11 a.m.

Doors for general admission ticket holders will open at 8 a.m. and tickets may be requested online via the Trump-Pence campaign site.

Two tickets may be requested per mobile number, per event, and all tickets are subject to availability on a first come, first served basis, according to the site.

In accordance with COVID-19 protocols, attendees of the rally will be given a temperature check, masks which they are instructed to wear and access to hand sanitizer.

Monday’s rally will mark Trump’s first visit to the Lehigh Valley since May, when he spoke at a personal protective equipment (PPE) distributor in Upper Macungie Township about his administration’s response to the ongoing coronavirus pandemic.

It remains unclear whether a visit to Pennridge Airport in Perkasie, Bucks County, is still planned.

That rally was originally expected to take place Monday, Oct. 26, but reports on Friday indicated that it would instead be held on Saturday, Oct. 31.

Trump’s Democratic opponent, Joe Biden, has yet to campaign in the Lehigh Valley, although he and his wife made a campaign stop in Bristol Township, Bucks County, Saturday.

Most polls currently show Biden in the lead in Pennsylvania.