Spotlight PA is an independent, non-partisan newsroom powered by The Philadelphia Inquirer in partnership with PennLive/The Patriot-News, TribLIVE/Pittsburgh Tribune-Review and WITF Public Media. Sign up for our free newsletters.

HARRISBURG — State and local health officials in Pennsylvania are holding off on implementing new lockdowns or business shutdowns, even as daily reported coronavirus cases break records set during the most harrowing days of the spring surge.

Instead, they’re urging the public to stick to mitigation protocols already in place–things such as wearing a mask, avoiding gatherings, honoring capacity limits in restaurants and other businesses–and to participate in tracing efforts if contacted by case investigators.

While it may seem counterintuitive that state officials aren’t turning back to stay-at-home orders and business closures as daily cases top 5,000, public health experts who spoke to Spotlight PA said widespread lockdowns aren’t the answer.

“I think there’s this false idea that it’s either lockdown or nothing, lockdown or normal life,” said Dr. Steve Albert, chair of the department of behavioral and community health sciences at the University of Pittsburgh Graduate School of Public Health. “And that’s not the case. I think the health department’s guidance is an attempt to navigate a middle range for that. And that’s what we should be doing.”

Physicians are also better equipped to treat the virus now than in the spring, Secretary of Health Rachel Levine said Thursday. That’s due to new drug therapies, better techniques for managing patients’ symptoms and a reserve of personal protective equipment.

“Our medical care is much, much better than it was in the spring,” Levine said. “This again is the ‘novel’ coronavirus and it had only been in existence for several months when the spring surge hit.”

Public health experts agreed that Pennsylvania is in a better position than it was in the spring to respond to the virus. But without more robust testing, contact tracing and efforts to isolate sick people, experts said cases–and subsequently, deaths–are going to continue to rise.

In Pennsylvania, there’s enough contact tracing data to show that infections are spreading because of small, private gatherings, where people let their guard down among family and friends. 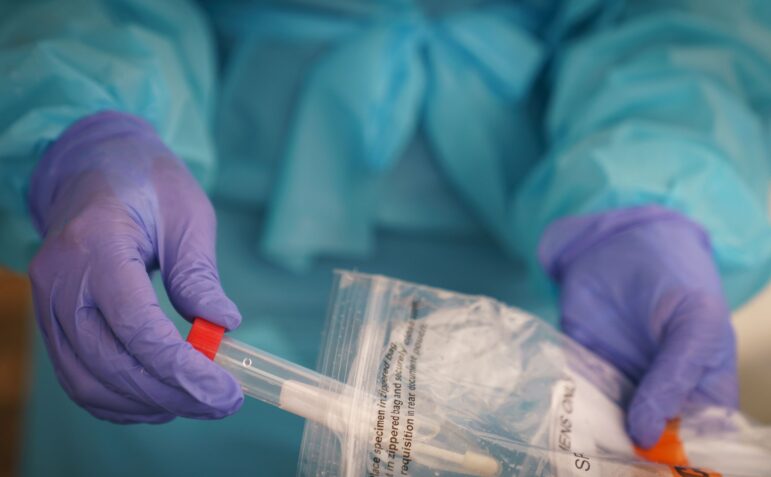 A more robust contact tracing system that quickly informs people who may have been exposed to COVID-19 combined with a testing system fast enough to confirm cases before a person spreads the virus should be prioritized, one expert said.

Policies that seek to target private gatherings may not be effective either, said Dr. Amesh Adalja, an infectious disease specialist at the Johns Hopkins University School of Public Health and an expert in coronavirus policy.

“I don’t think that any of this is enforceable in a way that’s going to have some kind of an impact,” Adalja said. “So I think it’s much better to meet people where they are.”

A more robust contact tracing system that quickly informs people who may have been exposed combined with a testing system that is fast enough to confirm cases before a person spreads the virus should be prioritized, Adalja said.

“Until you do that, you’re going to continue to have this seesaw where things go out of control,” he said.

This could be a challenge in rural areas, where people travel greater distances for their daily needs and have fewer options to isolate themselves, said Albert, of the University of Pittsburgh.

Pennsylvania on Friday reported an increase of 5,531 additional positive cases–the highest daily increase since the start of the pandemic–bringing the statewide total to 254,387. Rural counties–including those in the northern, central and southwestern parts of the state–are among those that have seen the sharpest per capita increases over the past two weeks.

Pennsylvania’s surge in cases is not the result of more testing, Levine said. The state’s percent-positive rate–the share of total tests that come back positive–is also increasing, she said.

Continuing education is also key, Albert said. While some people are simply tired of the pandemic, many others still don’t understand basic things like how to get tested or that they must wear a mask in public–options that will allow them to carry out their daily lives while keeping case counts low.

Levine on Thursday did not completely rule out new mitigation efforts but stressed that Pennsylvania already has orders in place that limit gatherings, reduce restaurant and business capacity, and set a last call for establishments serving alcohol.

Pennsylvania also has a universal mask order in place.

“We want to be very strategic in terms of what we do and we’ll be looking at that and (at) the right time, if necessary, we will implement it,” Levine said.

Municipal health officials, who can go beyond the state’s mitigation orders to set more strict guidelines if necessary, have also said they’re holding off on new lockdowns or business shutdowns.

Officials from the Allegheny County and Chester County health departments confirmed Thursday that they are not considering new orders at this time.

Instead, Allegheny County Executive Rich Fitzgerald pleaded with parents of school-age children and young people, urging them to avoid parties and after-school gatherings.

Halloween parties have emerged as sources of spread in the county, and Fitzgerald worried that Thanksgiving would also be a problem.

“We really need young people to step up and serve the community,” he said.

Dr. Thomas Farley, health commissioner for the City of Philadelphia, said during a press conference Tuesday that the city is monitoring cases and considering “the full range of options.”

“What we want to do is do the minimum amount of restrictions that would work,” Farley said. “We really want to change the trajectory of this epidemic, but we don’t want to be so heavy-handed that we unnecessarily restrict things that may be important for peoples’ livelihood.”

100 PERCENT ESSENTIAL: Spotlight PA relies on funding from foundations and readers like you who are committed to accountability journalism that gets results. Give now and your contribution will be TRIPLED. Donate and learn more at spotlightpa.org/donate.