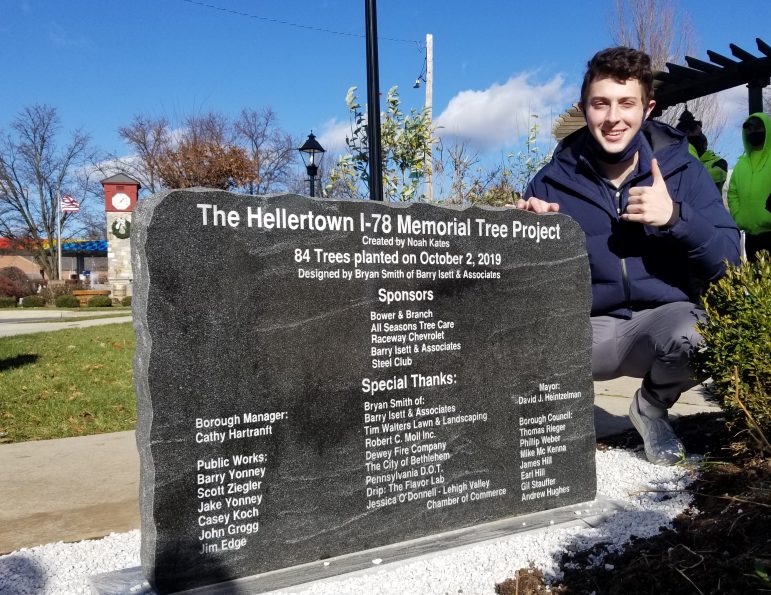 High school senior Noah Kates registers his approval of the Hellertown I-78 Memorial Tree Project monument that was unveiled outside Borough Hall Monday. Kates, who was a Hellertown junior councilman for several summers, spearheaded the beautification effort which resulted in more than 80 trees being planted along the I-78 westbound off-ramp at Rt. 412.

It’s about a mile from where the trees are, but that’s where a monument will help best tell the story of the Hellertown I-78 Memorial Tree Project, which was completed in the fall of 2019.

The monument, which was unveiled during a ceremony outside Borough Hall Monday, lists the names of dozens of donors and others who helped make the beautification of the I-78 exit on Rt. 412 possible.

The project was unique, both for its ambitious goal and because it was spearheaded by a high school student.

Noah Kates was a Hellertown borough junior councilman when he developed the idea to help improve the northern gateway to the borough by planting dozens of trees in a large field next to the interstate. 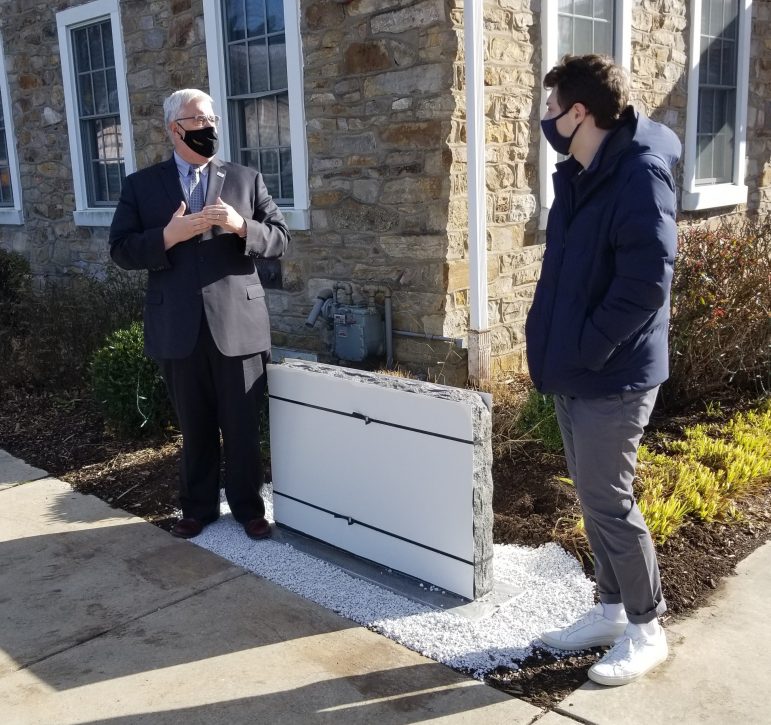 Hellertown mayor David Heintzelman praised junior councilman Noah Kates for his initiative in creating the Hellertown Tree Project and seeing it through to fruition during his time on council.

“It wasn’t like you were planting one little flower for PennDOT,” he noted. “He got support, he got backing and he did it.”

“We are so proud of you,” said Heintzelman to Kates, who was joined by his family at the ceremony. “We know you are going places. Your family has to be so proud of you.”

Kates, who is now a high school senior, said he recently applied early-decision to a college in the Philadelphia area and is waiting to hear whether he’s been accepted to it.

‘I’m very excited to see the stone (monument) and the trees continue to grow,” he said.

More than a year after they were planted, all of the trees are alive and thriving, he added.

Hellertown’s Public Works Department and director Barry Yonney were thanked for their contribution to the project, which was labor. They planted the 84 trees that are now part of the landscape enjoyed by thousands of passing motorists each day. 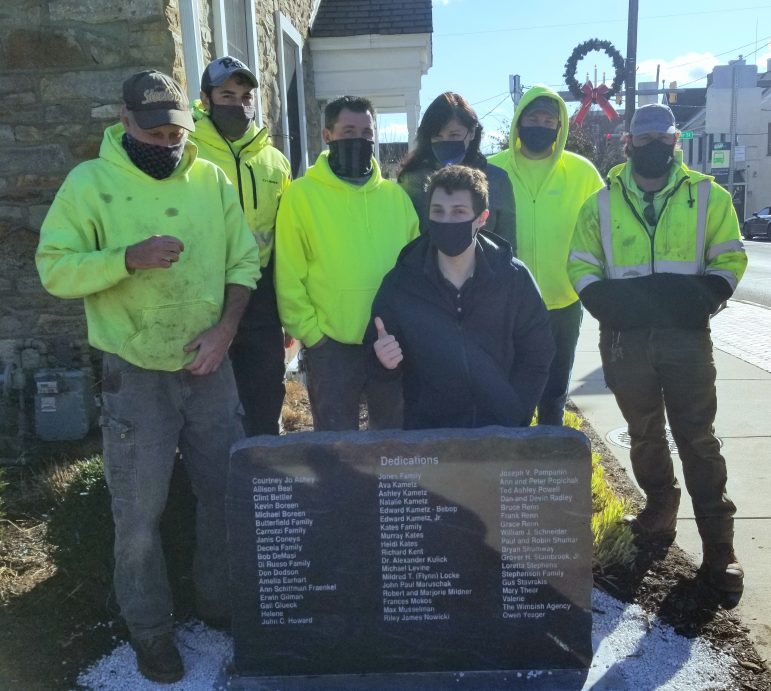 Hellertown Tree Project founder Noah Kates was joined by the members of the Hellertown Public Works Department and borough manager Cathy Hartranft for a photo next to the granite monument to the project that was installed outside Borough Hall Monday.

The stone monument was the work of master craftsman Robert Moll, who owns Monumental Crafts on Main Street in Hellertown.

A number of other benefactors and sponsors who helped turn a vision of green into a leafy reality are listed on one side of the monument, while the names of individual donors are engraved on the other.

The tablet will also serve as a lasting tribute to one young man whose perseverance and dedication made a difference in his community before he was even eighteen years old.

“He took on a monumental task and he proved himself,” Heintzelman said. “He challenged himself.” 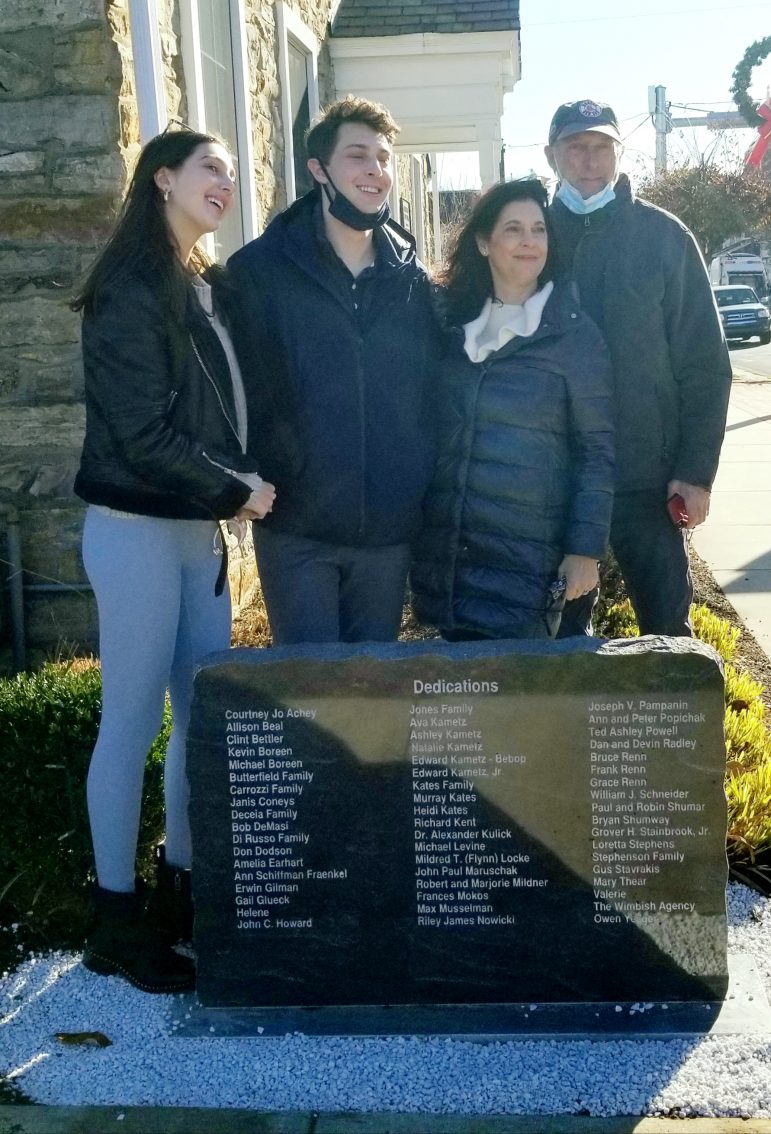 High school senior Noah Kates, of Springtown, was joined by his parents and sister at the ceremony. 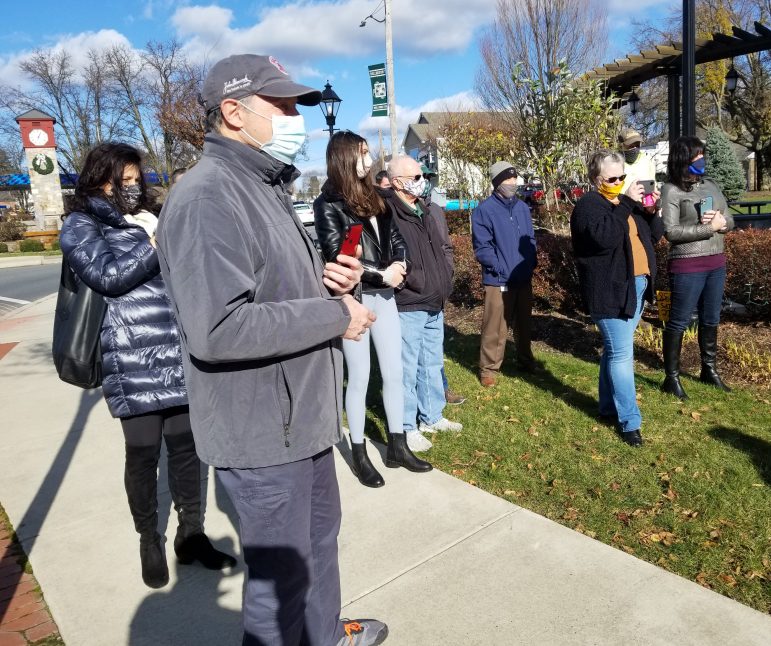 Borough staff and others who helped with and supported the Hellertown Tree Project turned out to see the monument that memorializes the beautification effort unveiled outside Borough Hall.