UPDATE: Rt. 378 in Lower Saucon Township had fully reopened as of early Monday.

What should have been a fairly quiet after-Christmas weekend on Saucon Valley roads ended up being anything but that thanks to two separate incidents that forced first responders out into the cold.

Early Sunday evening, a truck overturned and spilled its cargo near mile marker 64.8 on I-78 in Lower Saucon Township. It wasn’t clear if there were any injuries from the accident, but a source said the situation was made worse when vehicles drove through oil that leaked onto the highway and tracked fluids for more than a quarter of a mile. Another source said the overturned truck appeared to be carrying “cleaning wipes.” 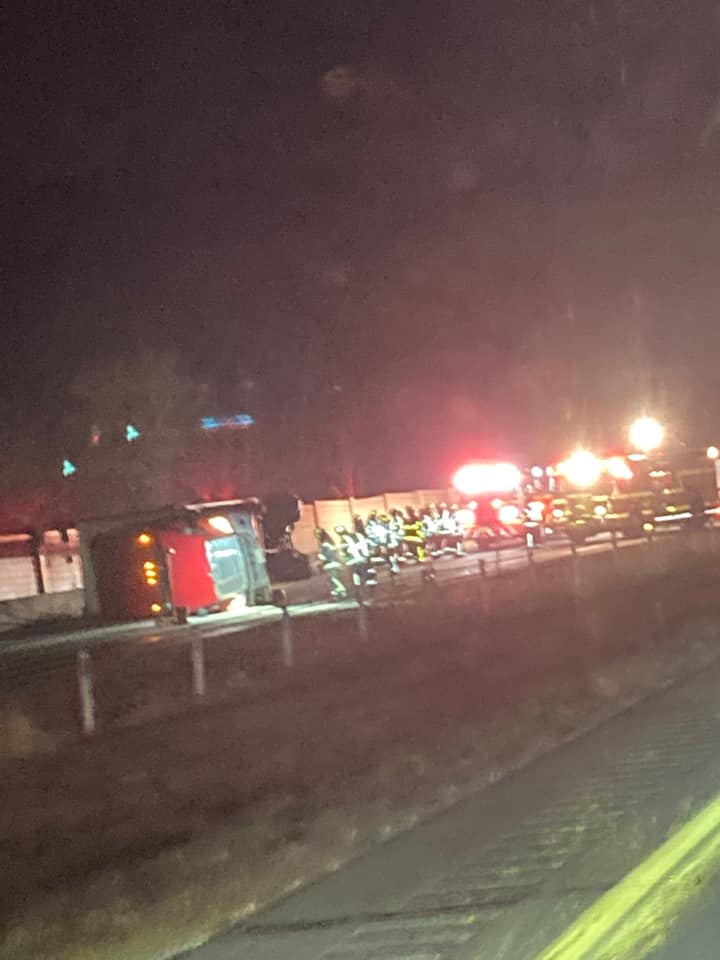 An accident involving an overturned truck on I-78 in Lower Saucon Township Sunday caused a traffic jam. To help stuck drivers get off the road, local volunteer fire companies opened an emergency access road that leads to Rt. 378. Lower Saucon Township Police have been tied up for days directing traffic around a fallen tree that closed a section of 378 Christmas Eve.

Lower Saucon Fire Rescue and Dewey Fire Co. No. 1 were both dispatched to the crash scene, reportedly requesting that the Steel City and Freemansburg volunteer fire companies close the on-ramp to I-78 west at Rt. 412 to prevent more traffic from entering the road. The source said the Upper Saucon Volunteer Fire Department was also called in to assist with traffic control at the West Raders Lane emergency access ramp to I-78, which is not far from the where the accident occurred and was opened due to the crash.

Drivers stuck on what one eyewitness termed “a parking lot” were funneled off I-78 west to Rt. 378 just north of the Saucon Square shopping center, but then some of them encountered yet another closed road.

As of Sunday evening, Rt. 378 between Seidersville Road and Old Philadelphia Pike–just north of the shopping center–remained closed because of a fallen tree blocking the two southbound lanes. It was unclear which wires–if any–the tree was tangled in, but Saucon Source Facebook followers reported that it fell during a rainstorm Christmas Eve night.

That meant that by Sunday evening, the section of road had been at least partially closed due to the down tree for 72 hours, with township police forced to direct traffic around it.

Earlier Sunday, police were allowing northbound through traffic to travel over South Mountain toward Bethlehem, however that was no longer the case early Sunday evening.

Rt. 378 is a state highway under PennDOT jurisdiction, and one of just a few routes that carry thousands of vehicles over South Mountain between Saucon Valley and Bethlehem.

When trees bring down wires the utility that owns them is often called in to help untangle and remove the debris. In some cases, local officials cannot act until a utility is on site, and the timing of the Christmas holiday may have contributed to the delayed response.