State Senator Lisa Boscola (D-18) hosted a virtual town hall on Friday, Jan. 15 and was joined by the Pennsylvania Secretary of Health, Dr. Rachel Levine, who fielded questions from local viewers about the distribution of COVID vaccines.

The panel began the discussion by thanking viewers for tuning in and reminding them of the importance of vaccinating the community.

“We can only move on from this pandemic one person at a time, one vaccination at a time,” said Boscola.

“The only way that we’re going to actually achieve saturation of our community is if people feel comfortable taking that vaccine once it’s available to them,” Schweyer added.

Levine echoed the statements made by the politicians, and said she is confident in the vaccines made by Pfizer and Moderna, even though they were developed quickly.

“Operation Warp Speed has done an amazing job through the federal government to develop and produce two safe vaccines in less than a year,” Levine said. “I wanted to tell you specifically that I have every confidence in the safety and effectiveness of these vaccines.”

She added that the quick progress on COVID vaccines was made possible thanks to developments in vaccine technology in recent years, as well as robust financing from the government and the ability of pharmaceutical companies to work parallel to one another in their development.

Much of the town hall’s discussion was centered around when different groups will have access to vaccine doses. Levine said the Commonwealth had been following CDC distribution guidelines, and plans were made to roll out the vaccine through tiers labeled 1A, 1B, 1C and 2.

Pennsylvania is currently only vaccinating people in the 1A tier, which includes healthcare personnel, as well as seniors and staff in long-term care facilities.

Due to recent suggestions made by Sec. Alex Azar of the U.S. Department of Health and Human Services, Pennsylvania will next be vaccinating seniors age 65 and over, and those age 16 and over with chronic medical conditions.

These individuals were originally included in the 1C group, however recent guidance encourages prioritizing this group of people over members of the 1B group, which includes first responders like police officers, U.S. Postal Service workers and teachers.

Levine said an announcement regarding when and how these individuals can go about scheduling their vaccines will come next week.

The Pennsylvania Department of Health website has the full breakdown of the distribution tiers, however the groups may continue to be modified.

The general population falls into group 2 and will be last to receive vaccine doses. Levine could not provide a concrete timeline for when group 2 individuals might begin receiving the vaccine, but her conservative estimate was the end of spring or beginning of summer.

Determining when different groups of people can receive the vaccine might seem difficult. To make that task easier, Levine said the PA Department of Health is working on a tool for their website which will provide people with this information.

The app will take into account factors like age, occupation and existing health conditions in determining when a person is eligible. The program will even direct people towards scheduling a vaccine if they are eligible for one. Levine believes the service should be available from the state’s department of health website by the end of January.

Philadelphia, Levine noted, is one exception, as the city has its own program. She mentioned this practice is similar to other large cities throughout the country.

Walgreens and CVS are currently assisting in vaccinating nursing homes and long-term care facilities. Levine said they will soon begin scheduling vaccinations for other types of care facilities, such as personal care homes and assisted living communities.

State officials have also called upon Topco pharmacies (common in Weis and Wegmans supermarkets) to help assist in the effort to vaccinate individuals in Pennsylvania.

Despite the combined effort, Levine noted that vaccine distribution lagged behind early projections.

“Throughout the nation there was a slower start than we had hoped for, mostly because of the challenge of doing it over the Christmas and New Year holiday,” she said.

In addressing comments that Pennsylvania was falling behind in vaccine distribution, Levine said that Pennsylvania is in the middle of the pack, and that there are a variety of factors that influence the state’s ability to quickly allocate every vaccine dose received.

She also hinted at positive developments in the near future, which may increase the state’s ability to provide more vaccinations.

Levine mentioned that AstraZeneca and Johnson and Johnson have vaccines in the pipeline, and that they could potentially be in circulation this spring.

She also mentioned that production efforts ramping up, as well as the state becoming more efficient with distribution, are reasons to be optimistic about an increase in the state’s ability to vaccinate the community quickly.

“We’re improving every day in terms of how much we’re giving,” Levine said. “More and more vaccine is going out every day.”

Levine spent the final segment of the town hall answering questions from members of the community.

Below are some questions and answers that are most relevant.

Can college students also receive the vaccine when teachers and educators become eligible?

Levine clarified that only faculty members and staff of colleges and universities will be included in the educators and teachers group. College students with no underlying chronic illness are included in the general population.

Do I need to take both doses of the vaccine?

Yes. Levine said the Commonwealth is deferring to the CDC and manufacturer guidelines with regard to administering the vaccine. The science calls for two doses of the Pfizer and Moderna vaccines.

How do I know when to come back for my second dose?

Levine said vaccination sites will be providing vaccinated individuals with a card after their first dose. This card will have information such as where and when they were vaccinated, as well as which version of the vaccine they received (Pfizer or Moderna). The test site automatically schedules the second dose appointment, and this information is included on the provided card. Individuals receiving the Pfizer vaccine will be scheduled for the second dose 21 days later, while those receiving the Moderna vaccine will return for their second dose 28 days later.

Why have I heard about a third dose being needed for the Moderna vaccine?

Levine said that this is part of a study Moderna is conducting and is not a general recommendation. All Pennsylvania vaccines administered at this point will be two doses.

Do I still need to wear PPE after I receive my second dose of the vaccine?

Yes. Levine says that individuals may take up to two weeks after their second dose to become immune, and not everyone becomes immune. For these reasons, the Commonwealth will continue to recommend mask-wearing, hand hygiene and social distancing, even for vaccinated individuals.

Will the vaccine be safe for me if I have an existing health condition?

Levine urges individuals to check with their doctors if they are unsure of how the vaccine will interact with existing medical conditions. She especially recommended checking with a doctor if an individual has a history of severe allergic reactions to injectable vaccines.

Do I need a prescription from a doctor to receive the vaccine?

No. No prescription is necessary, and the vaccine is free for everybody. Levine said hospitals and pharmacies are allowed to charge your insurance company for administering the vaccine, but Medicare, Medicaid and any commercial insurance provider will cover these fees. If an individual doesn’t have health insurance, then there is a federal program that will pay for it. The vaccine is free for everyone, no matter what.

Do I have to be a legal U.S. citizen to receive the vaccine?

No. Levine pointed out that the virus doesn’t know about geography or citizenship. It affects everyone the same way. The goal is to immunize the entire population in order to protect public health.

Is there a vaccine for young children?

Levine said Pfizer and Moderna are currently studying the effect of their vaccines on children, but there currently is no vaccine approved for use in children. The Commonwealth will begin vaccinating children once it can do so safely.

Can I receive the vaccine if I am pregnant?

Currently there is no best answer to this. Levine said there is no current evidence that either vaccine has any impact on reproductive organs, or sterility, or that they can cause birth defects. However, the decision should be made in consultation with the pregnant woman’s doctor.

Will the vaccine work against the new strain of COVID?

This is also still being studied, according to Levine. She said there is every reason to believe that the two vaccines available will work against the new strain. She also noted that Pennsylvania has only seen one case of the new strain, and it came from an individual who came from another country.

How will the transition of presidential administrations affect the rollout of the vaccine?

Levine said she doesn’t anticipate any issues as the Biden administration transitions into power. She said she has already been working with people from the Biden campaign about continuing to distribute the vaccine.

Our region’s health providers have begun allowing eligible individuals to register for their vaccine doses.

Lehigh Valley Health Network patients who are essential workers may register for a vaccine through the MyLVHN app. St. Luke’s patients can register through the MyChart app. 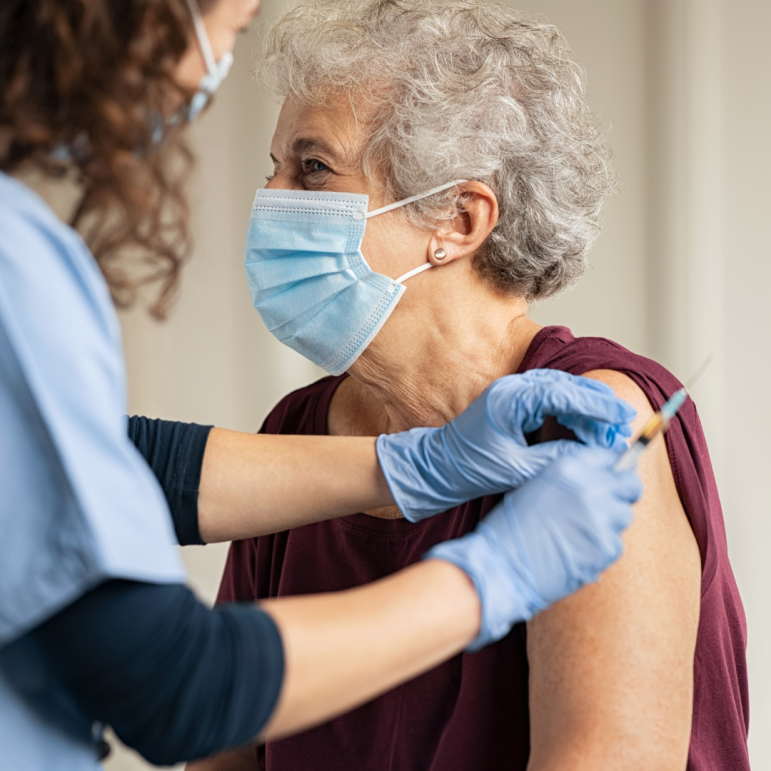 COVID vaccinations are under way in Pennsylvania.