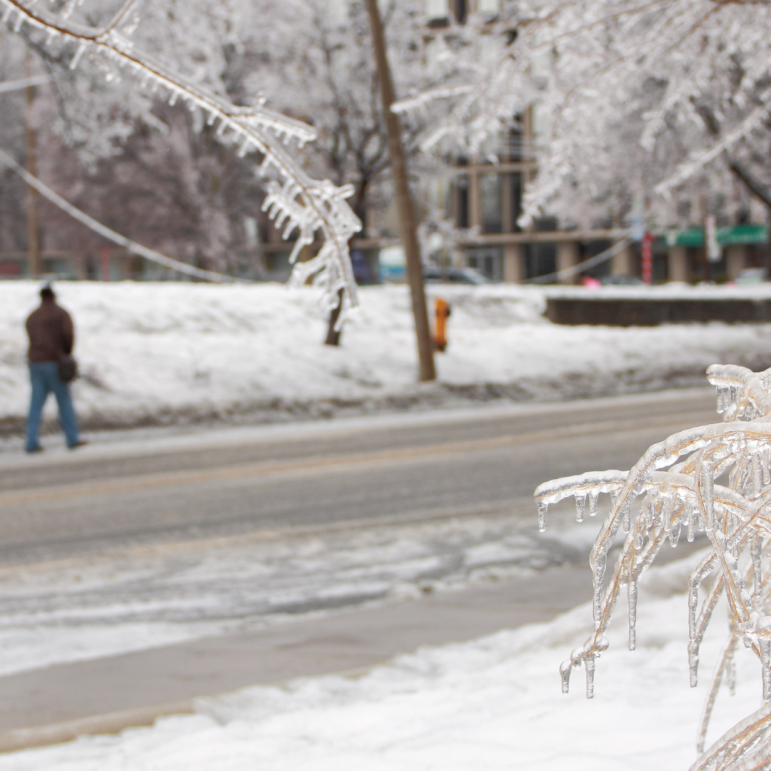 Residents of east central Pennsylvania should prepare for icy conditions overnight Monday into Tuesday. If several tenths of an inch of ice accumulates, falling tree limbs may bring down power lines, resulting in scattered power outages in the area.

After a fairly tranquil dual holiday weekend, the weather later in the day Monday was forecast to turn troublesome.

The National Weather Service has issued an ice storm warning for Upper Bucks, Western Montgomery, Northampton and Lehigh counties as well as the Southern Pocono counties of Carbon and Monroe for 6 p.m. Monday to 10 a.m. Tuesday. During this period “significant icing” could accumulate as much as four tenths of an inch in places, it said.

A small amount of snow and/or sleet is also possible, however the main threat to life and property during the storm will be from freezing rain, forecasters said.

“Power outages and tree damage are likely due to the ice,” the NWS warned. “Travel could be nearly impossible. The hazardous conditions could impact the morning or evening commute.”

By Tuesday morning, the weather service said it expects any lingering frozen precipitation to change to rain, as temperatures surpass the freezing mark.

Tuesday’s forecast high temperature in the Lehigh Valley is around 40 degrees, which would make it one of the warmest days the area has experienced in the past few weeks.

Additional wintry precipitation is possible Wednesday night through Friday, when snow, sleet, freezing rain and plain rain could fall over a nearly 48-hour period, per the forecast.

As of Sunday, Feb. 14, the seasonal snowfall to date as recorded at Lehigh Valley International Airport was 47.7 inches, with 29.2 inches measured so far this month. Much of this month’s total is from a snowstorm that began Jan. 31 and continued into Groundhog Day, by which time more than two feet had fallen in most places.

In an average winter, the Lehigh Valley receives slightly less than 35 inches of snow. By contrast, last winter the area only picked up about five inches.

The measured snow depth Sunday at LVIA was 13 inches, according to National Weather Service data.

With more than a month of winter remaining, it is likely that these numbers could grow.

If they do, they will only bolster Punxsutawney Phil’s prediction made earlier this month.