Do you fondly remember cold, snowy winters that lasted for months? (Because winter literally lasts three months.) How about crackling fireplaces all aglow, sledding til the sky turned dark, and inside mugs of steaming hot cocoa? Well… Cue the turntable scratch effect. Because if frosty memories are your thing, you probably already want to forget about the winter of 2019-2020, which has been a dud for anyone who fantasizes about fresh powder or gets misty-eyed for a mercury thermometer plunged past zero.

In January, the average mean temperature in the Lehigh Valley was eight degrees above normal, and barely three inches of snow fell the entire month. The normal monthly snowfall in east central Pennsylvania for January is 10 inches, according to National Weather Service data. And by this point in an average winter season, the Lehigh Valley would have received 18.5 inches of snow. However, this season barely five inches has accumulated since Dec. 1, which is when meteorological winter begins.

So far February 2020’s departure from the normal temperature average has been even greater than January’s, with temperatures approximately 12 degrees above average and only a trace amount of snow recorded at Lehigh Valley International Airport in Allentown, which is where the NWS records its official observations for the area. And the extremely mild weather we’re experiencing isn’t confined to eastern Pennsylvania. In fact, most of the contintental U.S. this year has been unusually warm and snowless. 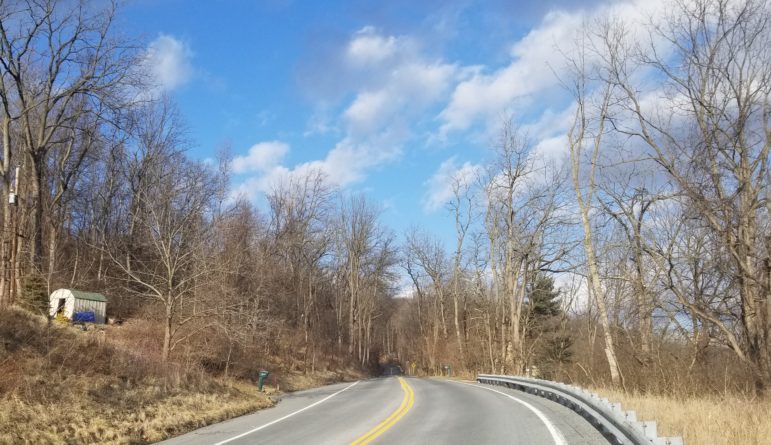 Although cooler than previous days had been, Saturday, Feb. 8 was still above average, temperature-wise. And there was no snow to be seen. Pictured above, Church Road in Upper Saucon Township is dry and clear, under sunny skies.

If you’re 40 or older it might seem like winters used to be colder, and generally speaking they were. There is ongoing debate among some members of the public about whether this is the result of climate change or cyclical weather patterns, but the fact remains that some of the mildest U.S. winters on record have occurred in the past two decades.

Even so, this winter has been exceptionally mild, with temperatures in the Lehigh Valley failing to drop below freezing–even overnight–for days on end. For example, the temperature remained above freezing from Feb. 2 to Feb. 8, according to NWS observations at Allentown published on the Philadelphia/Mount Holly forecast office’s webpage. The normal overnight low during this period should be about 20 degrees, so nearly a week without the temperature falling below freezing is virtually unheard of.

Perhaps at this point you’re asking, “so?” So, the warm weather could spell trouble in terms of insects this spring, summer and fall. Spotted lanternflies, for example, like it hot.

And mild winters don’t just mean the bugs will be bad. They can also be bad for business, particularly in states like Pennsylvania where ski resorts and other wintertime destinations are drivers for our economy. From plow truck drivers to ice sculptors to farmers, seeing red on a winter temperature map can lead to a case of the blues, because it often means lost revenue which can’t be recouped at any another time of year. Allergy and sinus sufferers, too, may be headed for an unpleasant season of sniffles and sneezes, thanks to a lack of cold to kill mold and other irritants in the air.

What are the chances for Mother Nature to throw a Hail Mary pass in the form of a significant snowstorm before the clock runs out on the “winter” of 2020? Not good, says Tony Luchini of Lehigh Valley Weather Authority, and the window of opportunity for one is closing fast.

Whether you’re a fan of winter weather or not, follow LVWA on Facebook to keep abreast of any changes in the forecast for our area, not just now, but all year long. Also subscribe to No Rain Date, the Saucon Source weekly podcast, to hear Tony’s 5-day forecast every Thursday. No Rain Date is also available on iTunes, Google Play, iHeartRadio, Stitcher, Tunein and Spotify. Simply download the free app, search for “No Rain Date” and click on the follow or subscribe button to receive local news and interviews each week.