Saturday was a monumental and historic day for the Saucon Valley wrestling program.  About fourteen hours after dropping in the 2020 PIAA state semifinals to four-time champion Reynolds, the Panthers had to regroup and face the Notre Dame Green Pond Crusaders in the blood round of the consolation bracket.  Even though Saucon fell to Reynolds, they still had a chance to fight for a spot on the podium and be recognized as one of the top four teams in Pennsylvania.

So, for the fourth time this season the Saucon Valley Panthers had to square off against the Notre Dame Crusaders.  Saucon fell to the Crusaders in the Colonial League opener and, then again in the Colonial League Championship Final.  In an ultra-intense affair, the Panthers came out on top to win the District XI championship.  To say that this matchup has quickly evolved into a rivalry is a massive understatement.  There is a clear and turbulent chasm that has evolved between the two programs. The fact that both sides sport many fine and outstanding wrestlers is undeniable.  But, it is Notre Dame with their ability to recruit and easily add transfers to create an all-area, all-star team against Saucon’s tactic of using a female wrestler that fuels the inferno.  Catholic schools can recruit their student-athletes, but they are prohibited from allowing males to compete with females. 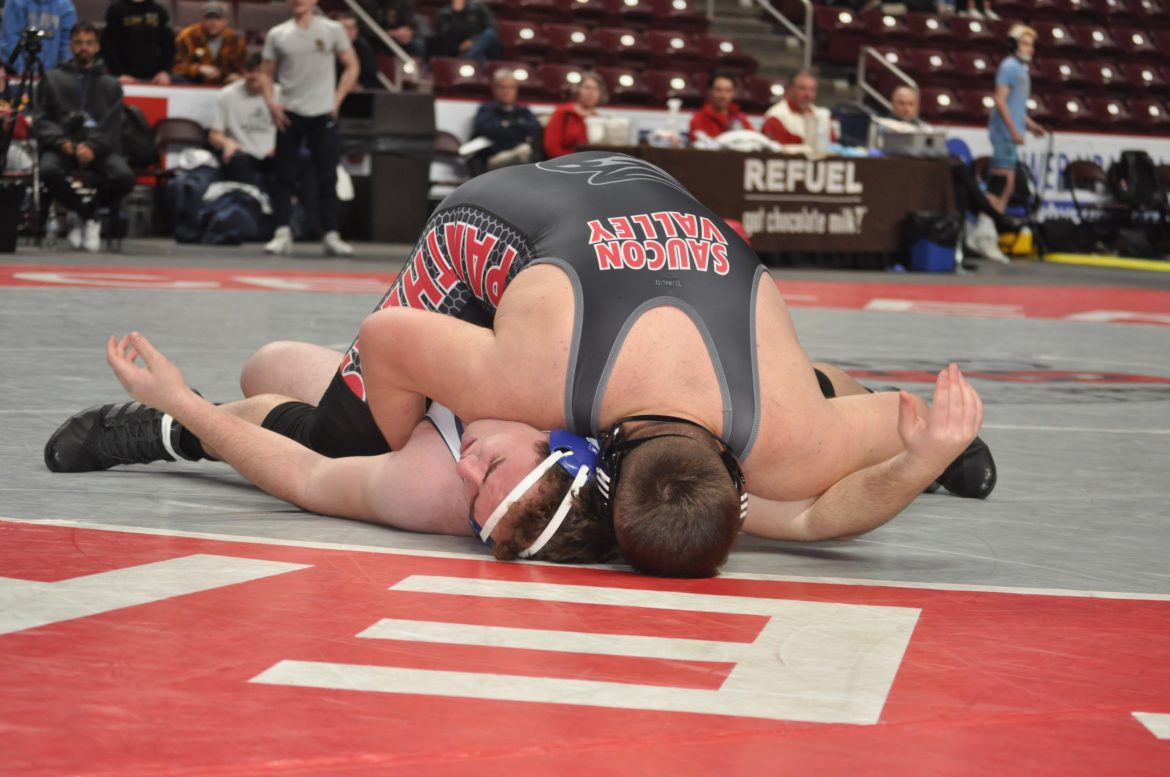 The match began with the 195-pound weight class and started off well for the Panthers.  Saucon won three of the first four bouts to build an 18-3 cushion.   The Crusaders opted to forfeit to Saucon stud, Dane Csencsits at 195. Csencsits is a three-time PIAA state qualifier and has rolled up a 34-5 record this season.  Notre Dame answered with Jason Sine’s decision at 220.  The Panthers fired back with a second-period pin by Nick Warnke at 285 and Aaliyanna Mateo’s forfeit awarded at 106. 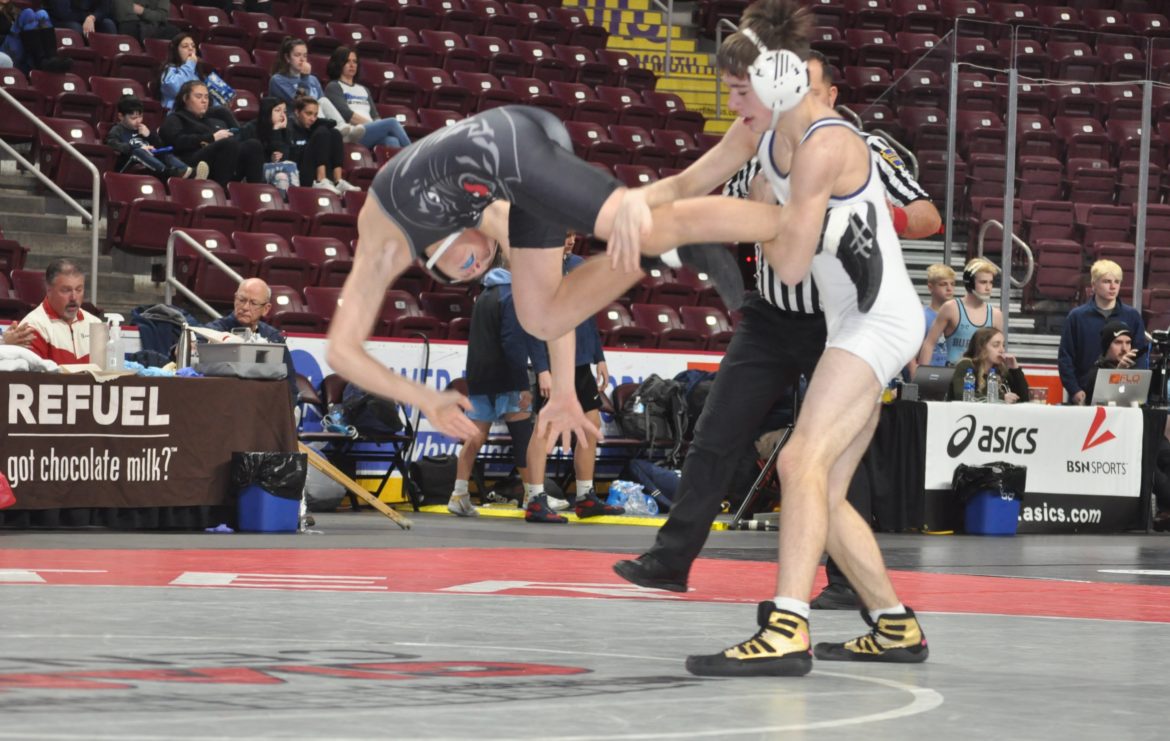 Notre Dame, with their version of Murderer’s Row won the next five bouts.  2019 New Jersey champ Brett Ungar (113) won by disqualification as Saucon’s Connor Nicholas was called one too many times for stalling.  Bryson Vaughan (120) outlasted Travis Riefenstahl in overtime for a decision.  Brandon Chletsos (126) rang up a major-decision over Cael Markle.  Both wrestlers were deducted a team-point for unsportsmanlike-conduct following the conclusion of the bout.  Markle retaliated to a post-match shove initiated by Chletsos.  The Crusaders continued their run with Josh Bauman’s fall over Kevin Dyer and Ryan Crookham’s forfeit.  Crookham, a sophomore, is a 2019 PIAA state champion.  After nine bouts Notre Dame reclaimed the lead, 27-17. 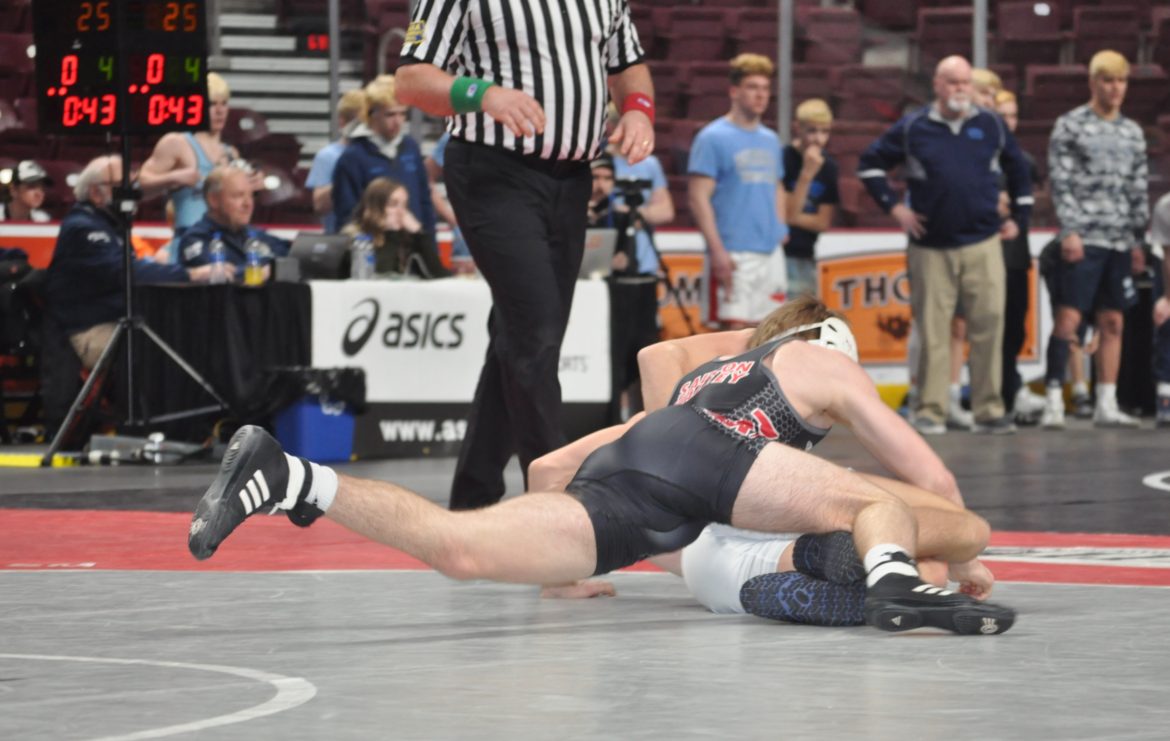 Panther freshman Jake Jones converts a takedown in overtime to win a pivotal bout against Notre Dame in the 2020 PIAA team championships.

Aside from Andrew Cerniglia’s fall at 160 over Ty Pfizenmayer, Saucon bumped their lineup and won four of the five remaining bouts.  In what was likely the most pivotal bout of the match, Panther freshman, Jake Jones (145), defeated Holden Garcia in a 6-4 overtime affair.  Garcia, a freshman who transferred to Notre Dame from Phillipsburg, New Jersey last summer, is a monster of a wrestler with a 33-10 record.  Jones victory stopped the Crusader run and got the Panthers to within striking distance at 27-20.

Senior Thomas Spirk (152) then rolled Notre Dame’s Jacob Wehr for a 16-1 tech-fall which cut the Crusader lead to 27-25.  Cerniglia’s pin at 160 extended Notre Dame’s advantage to 33-25 with only two bouts remaining. 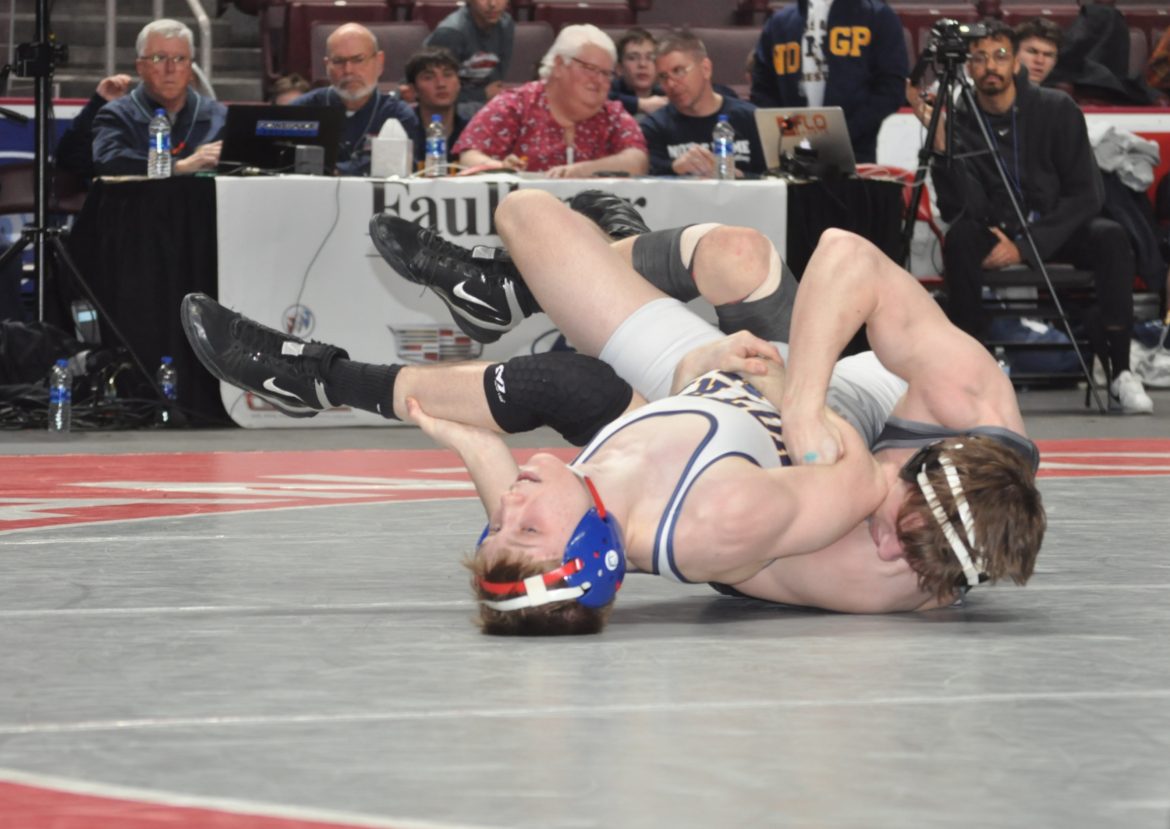 Saucon Valley senior Thomas Spirk once again fired up the “Tilt-A-Whirl” to earn a tech-fall against the Notre Dame Crusaders in the 2020 PIAA team championships.

The Panthers were, no doubt, favored in the last two bouts, but needed to combine for nine points to seal the deal.  Saucon sophomore Ty Csencsits (170) hit a second-period escape and takedown to come through with a gritty 3-1 decision over Jared Blobe that made the score 33-28.  Then, Saucon superstar senior, Matt Arciuolo (182) hit a “cement-mixer” to pin the Crusader’s Mason Ludlow.  Arciuolo’s second-period fall not only put Panther Nation into a celebratory frenzy, but it would also prove the key in putting the Panthers on the PIAA podium.  The Saucon Valley hometown heroes defeated Notre Dame’s all-area, all-star team 34-33 on one of the biggest and brightest stages that Pennsylvania high school wrestling has to offer. 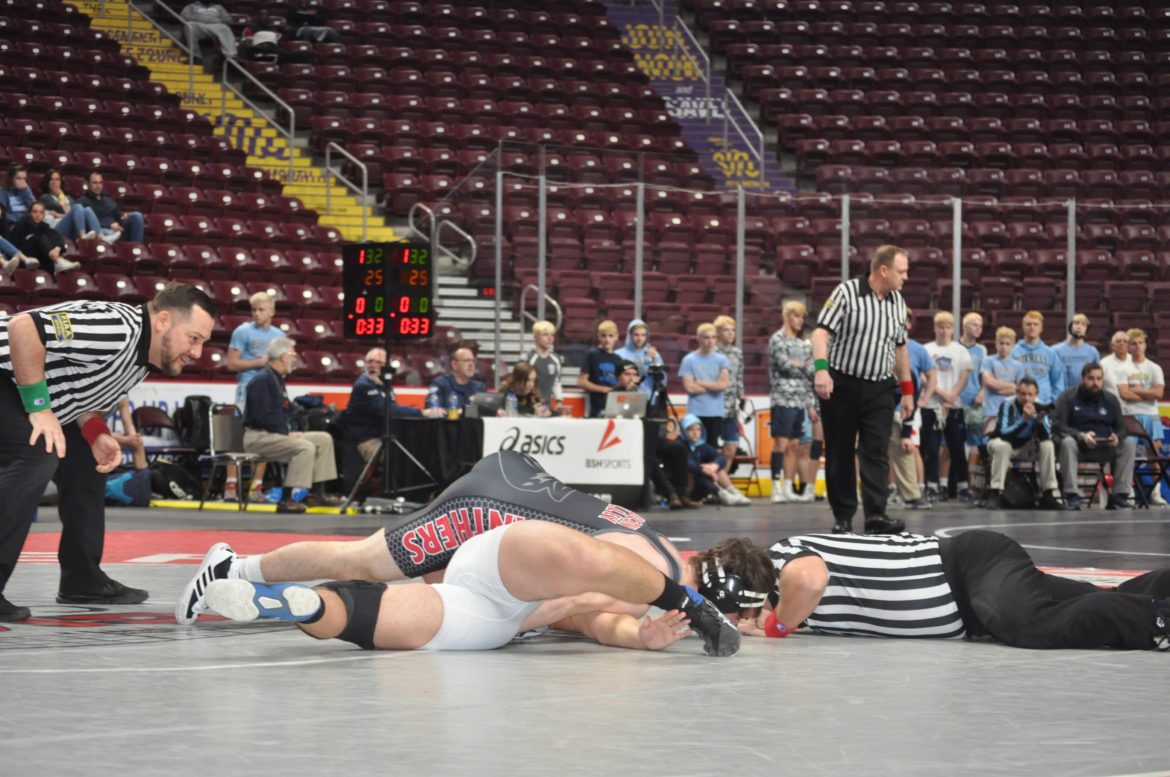 Saucon Valley senior Matt Arciuolo brings a victory to the Panthers by finishing with a pin against Notre Dame in the 2020 PIAA team championships. 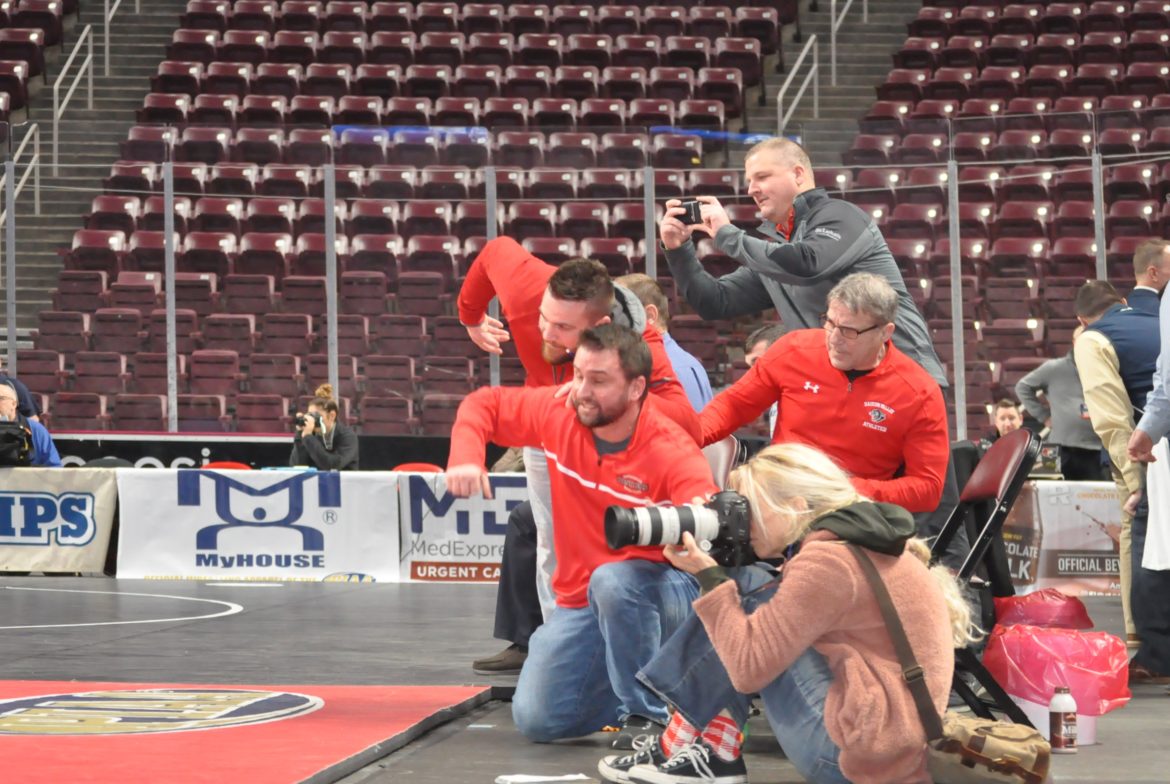 The Panther staff reacts as Matt Arciuolo finishes the job against Notre Dame in the 2020 PIAA team championships.

About forty-five minutes later, Saucon Valley went right back at it against the Chestnut Ridge Lions in the medal round.  Once again, the Panthers got off to a good start with Braydyn Lugardo’s decision at 220.  However, the Lions responded by winning the next six bouts.  Chestnut Ridge benefitted from falls at 106 and 126 as well as a forfeit at 113. In addition, the Lions took the close decisions at 285, 120 and 132.  At the halfway point of the bronze-medal match, Saucon found themselves in a 27-3 hole. 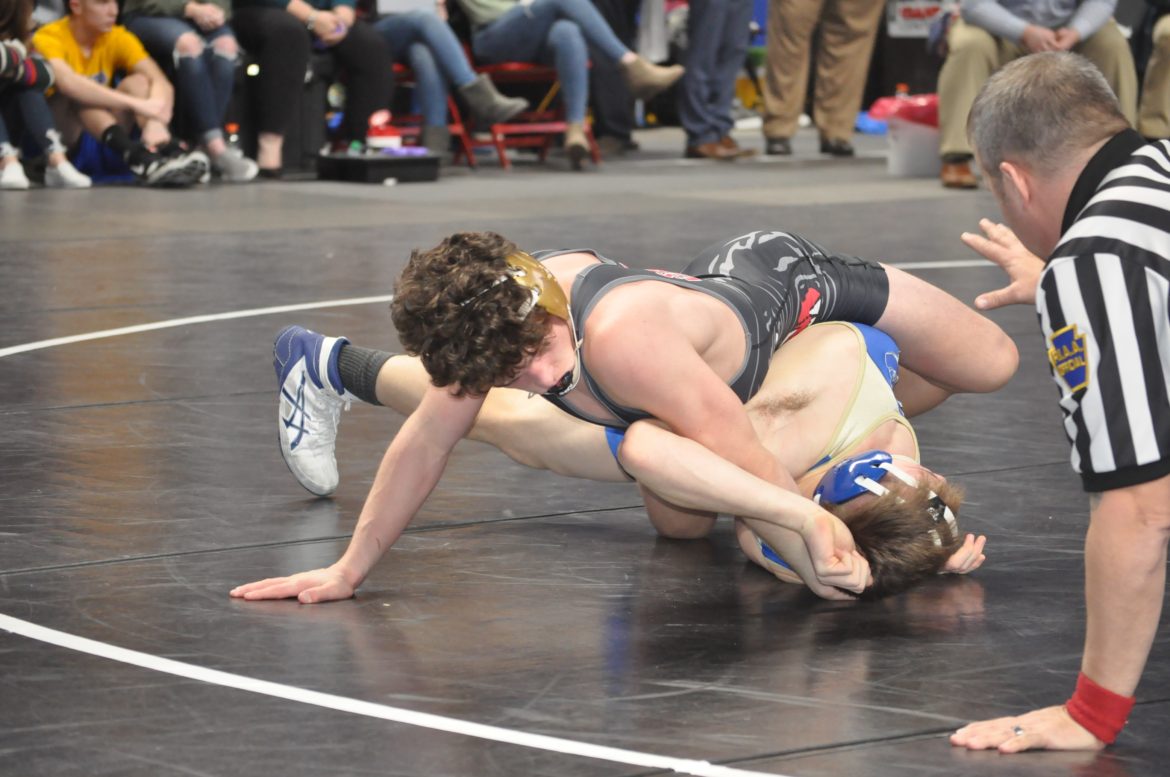 Freshman Ty Pfizenmayer picks up six points for the Panthers against Chestnut Ridge in the PIAA team tournament.

Once again, Saucon freshman Jake Jones (138) stopped the bleeding with a major-decision.  But, Chestnut Ridge’s response with a fall at 145 and decision at 152 made the score 36-7 and mathematically clinched the match for the Lions.  Saucon Valley did go down swinging with pins by freshman Ty Pfizenmayer and sophomore Ty Csencsits that closed the score to 36-19.  And, perhaps, the Panthers two best wrestlers, Matt Arciuolo and Dane Csencsits were awarded forfeits which made it a 36-31 final. 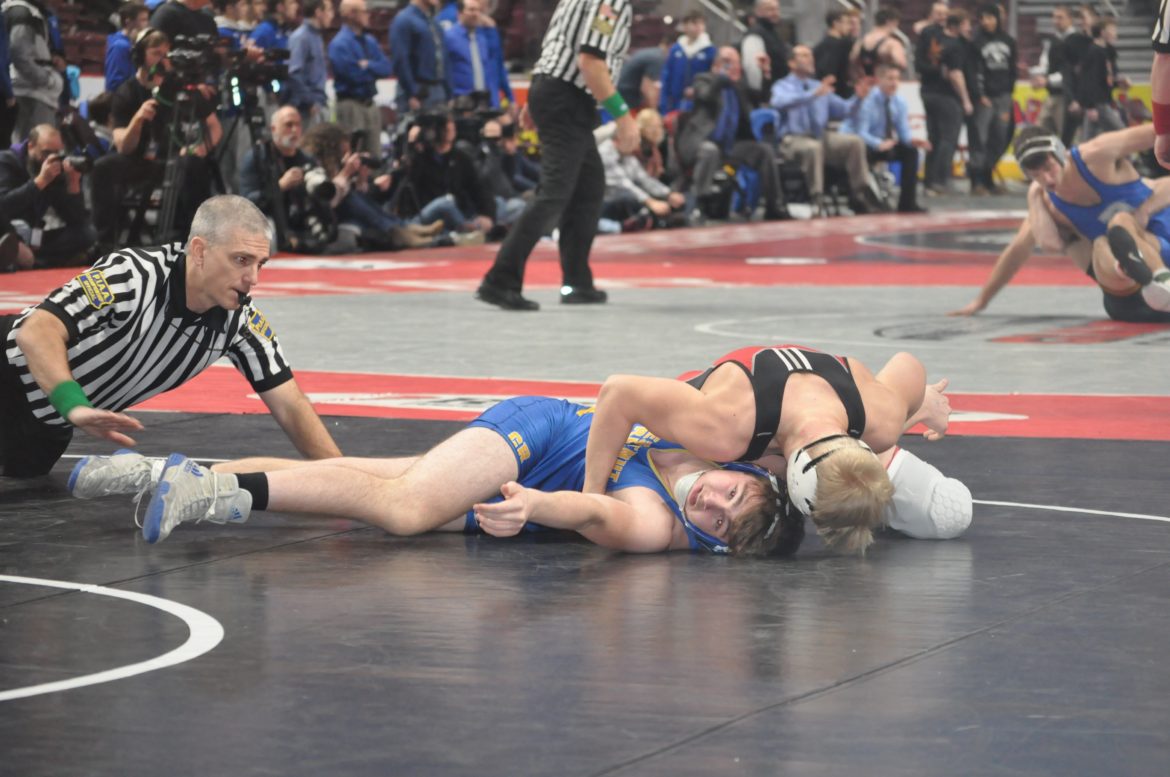 Saucon sophomore Ty Csencsits working for a pin against Chestnut Ridge in the 2020 PIAA team tournament. 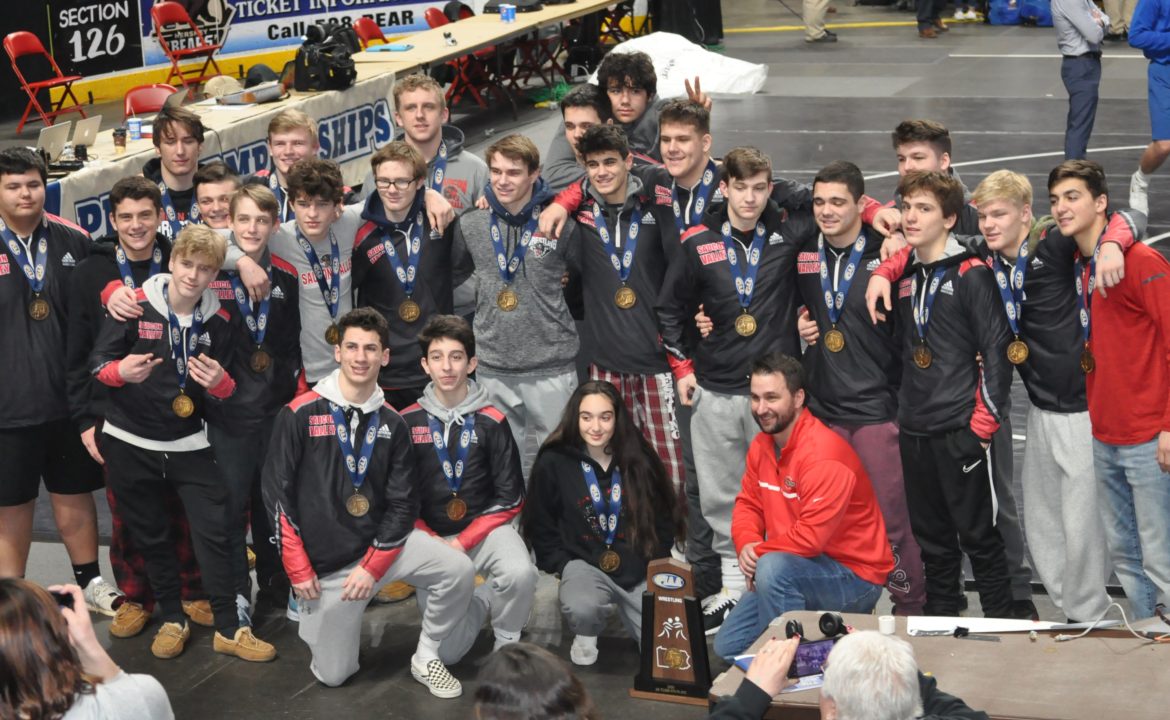 In 2020, the Saucon Valley Panthers proved to be among the top four wrestling teams in the state of Pennsylvania.

“This weekend was filled with highs and lows, but it was incredible to see this team come back and fight against one of the best teams in the state and country.  This community is something special and it was great to see our kids fight through adversity and bring back a team trophy to this program and for this community!” 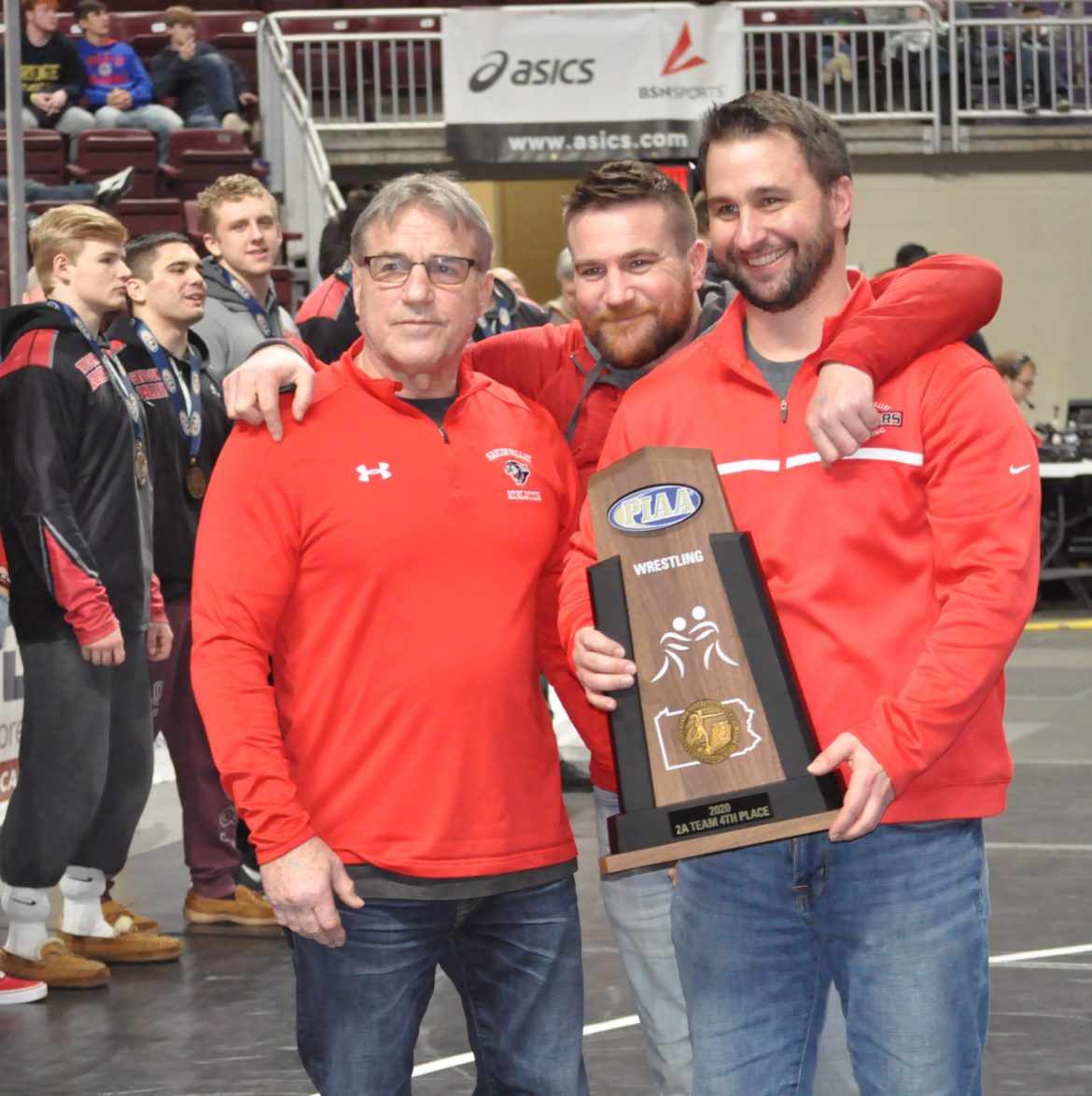 Up Next:   The Panthers will enjoy a couple of well-deserved days off before training for the District XI individual tournament (Feb. 21 & 22). 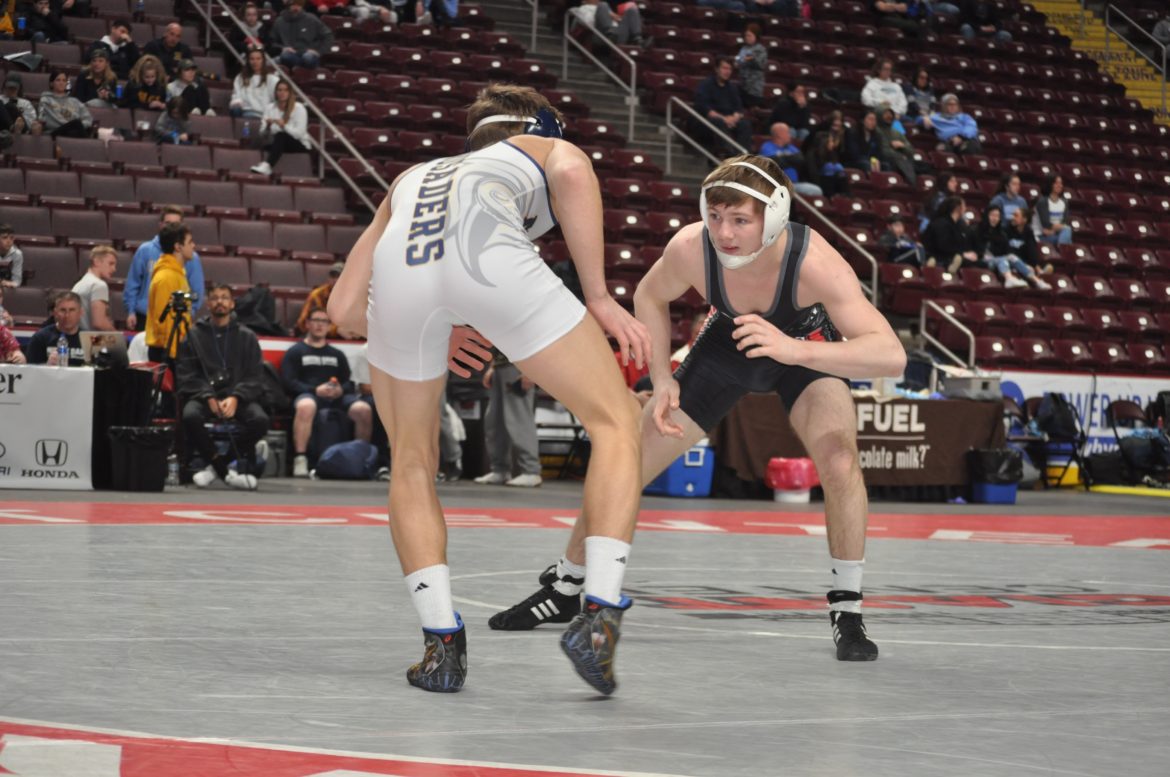 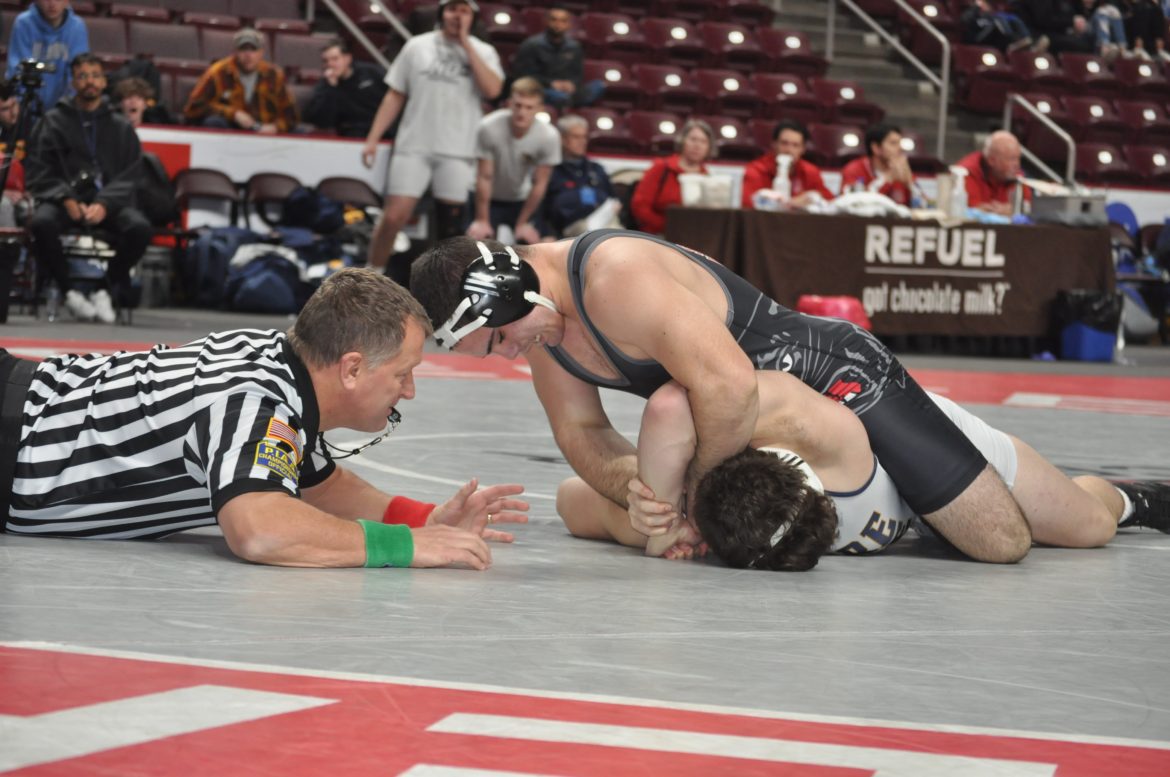 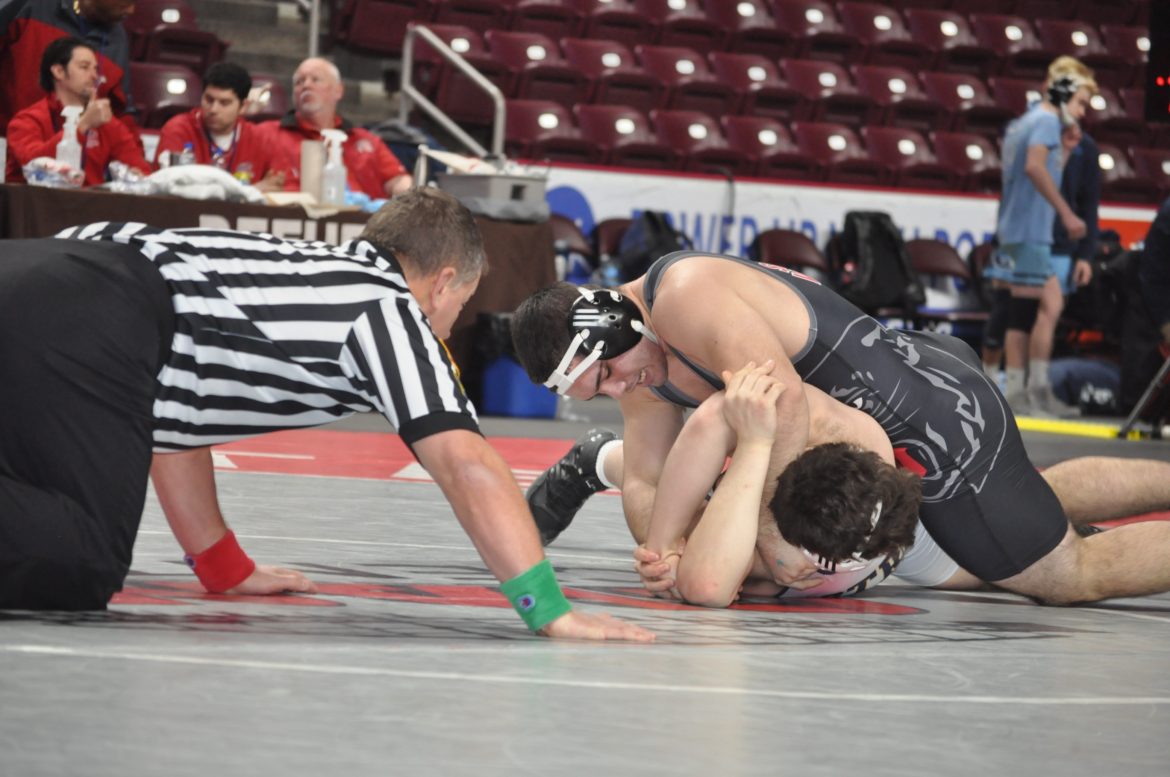 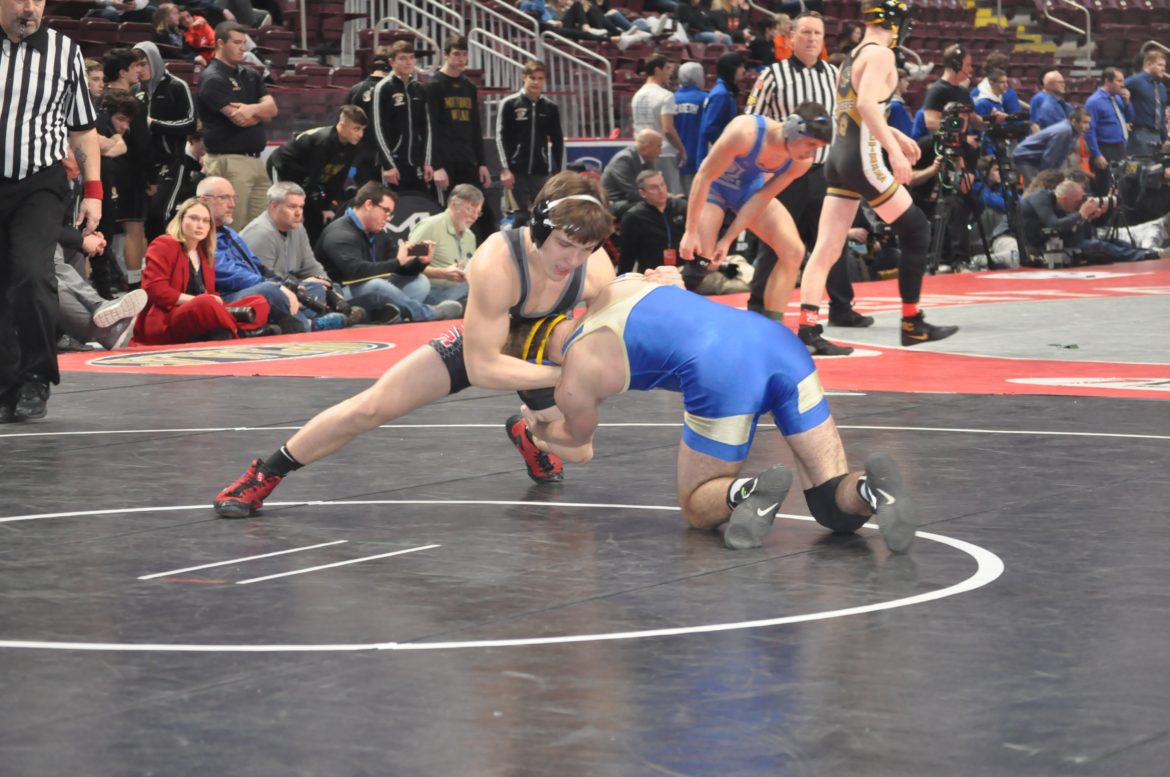 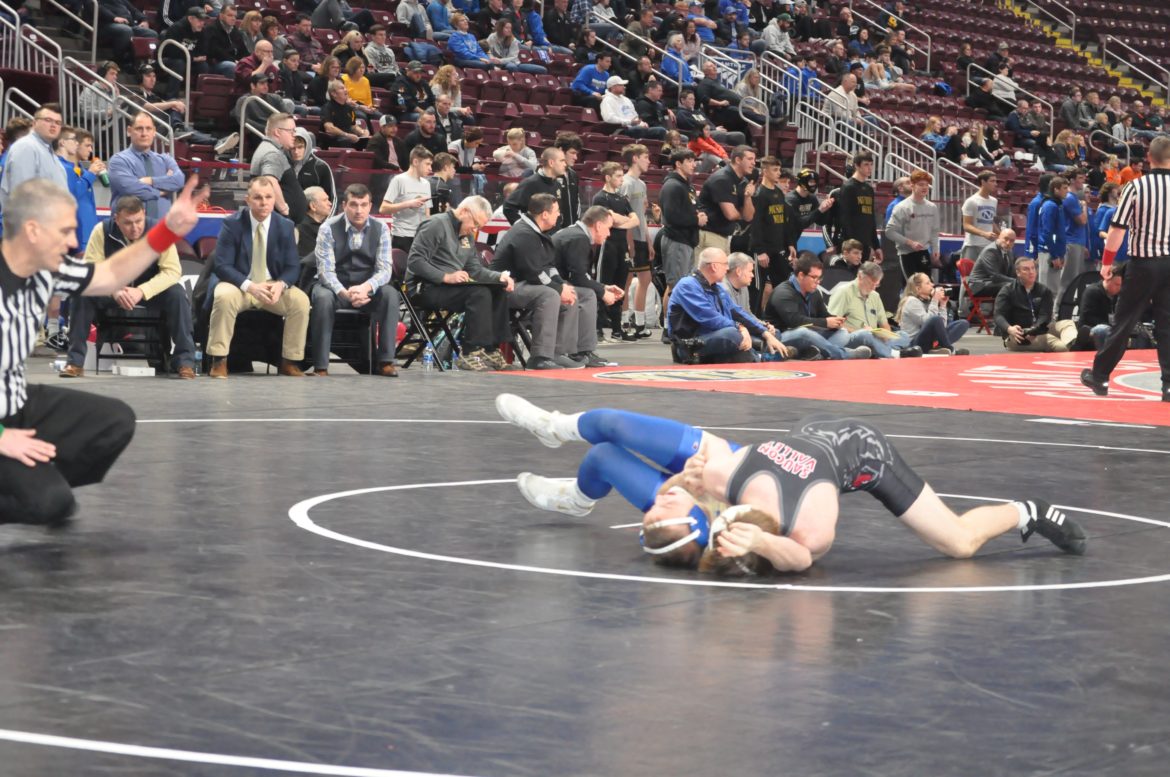 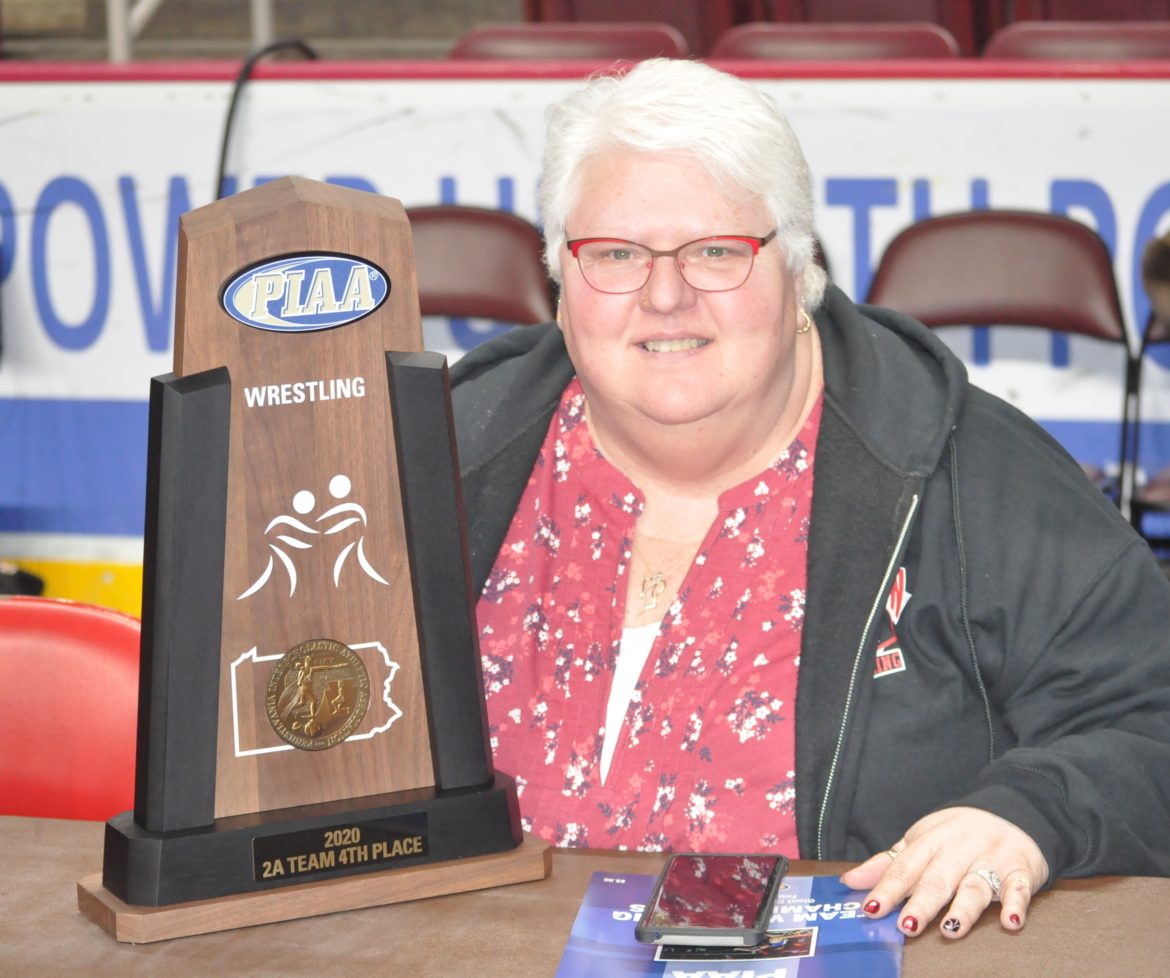 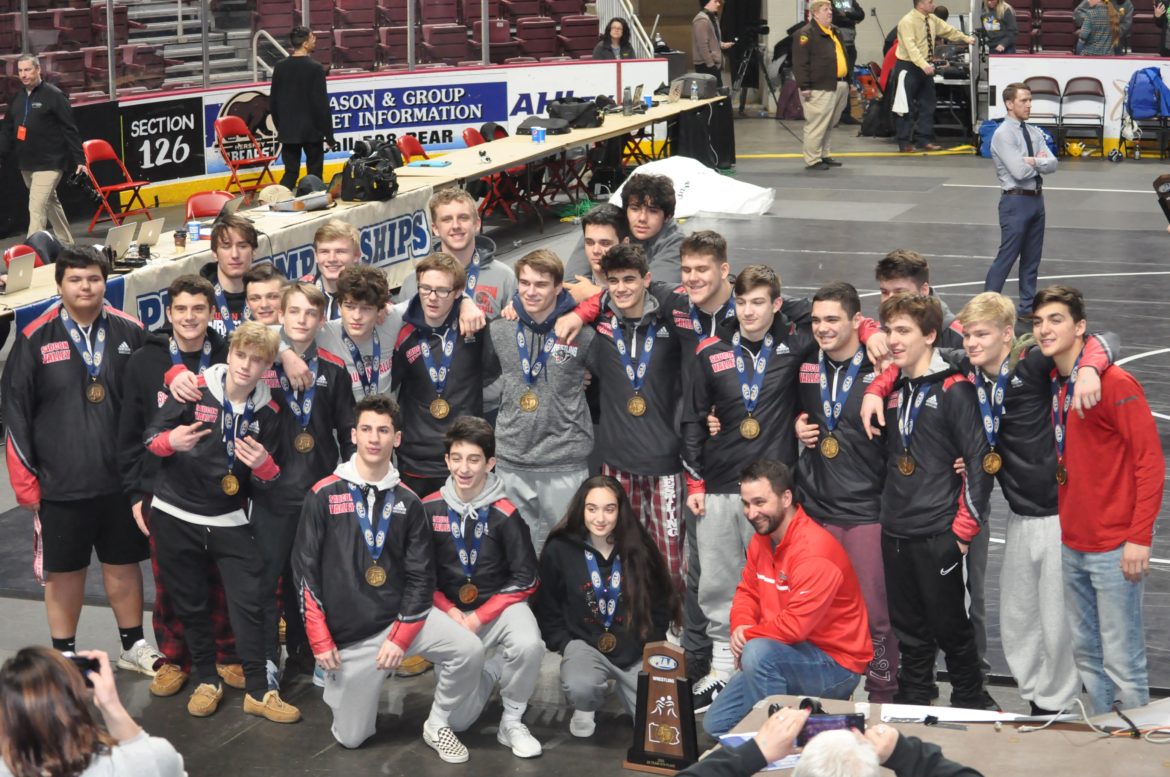 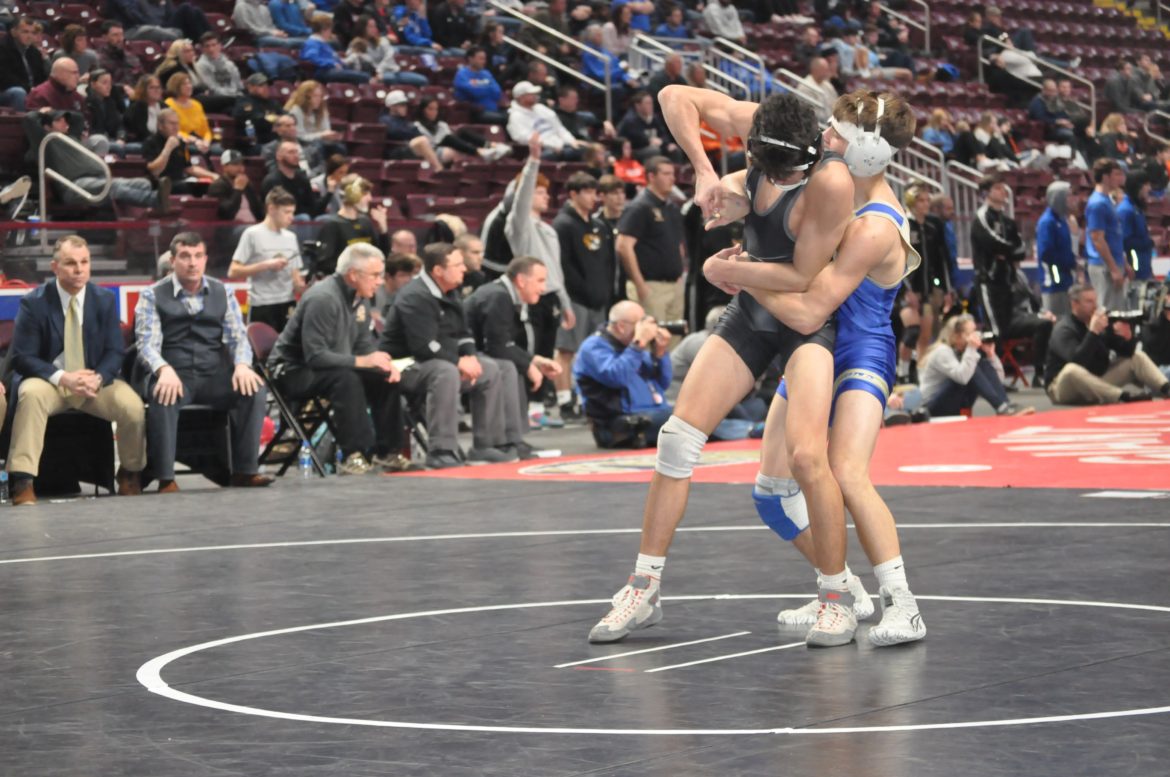 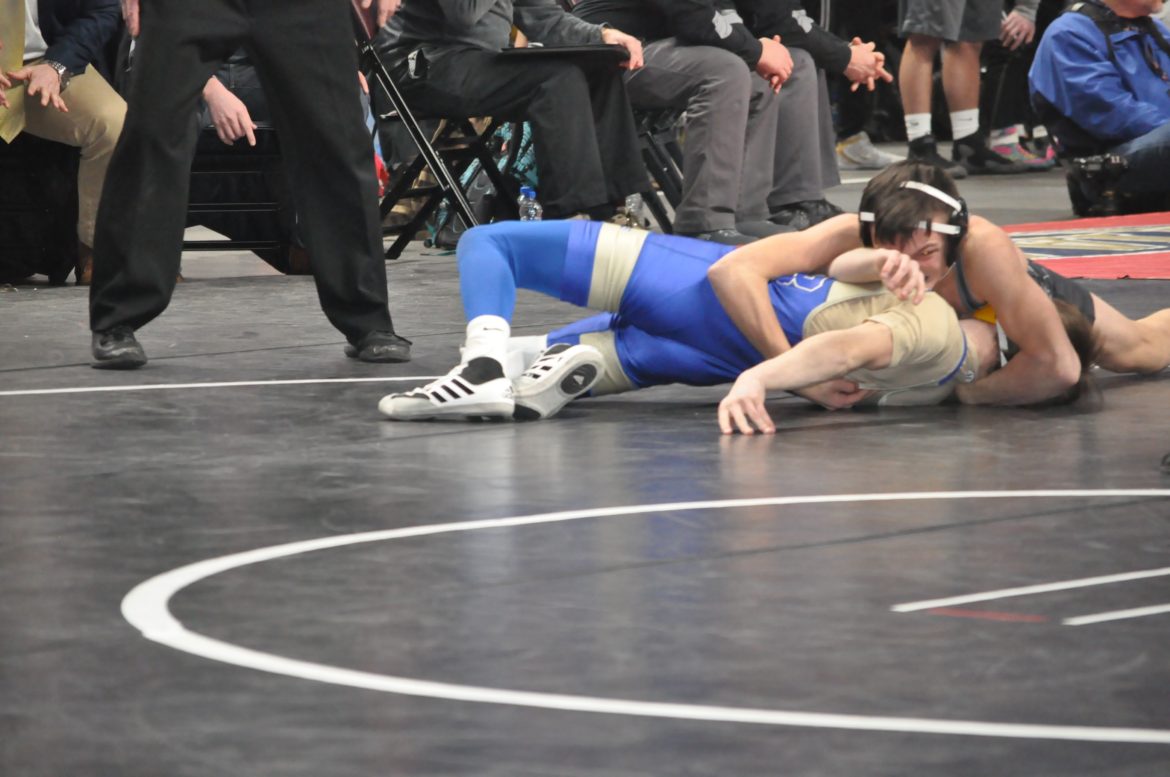 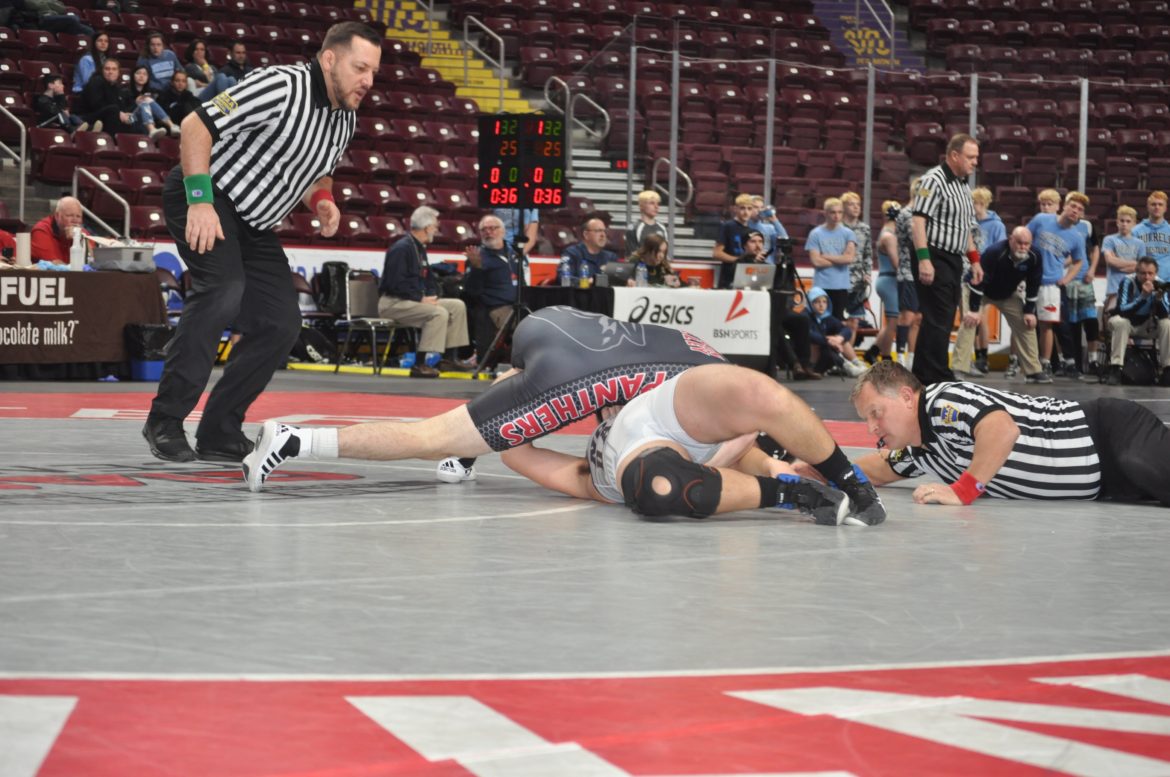 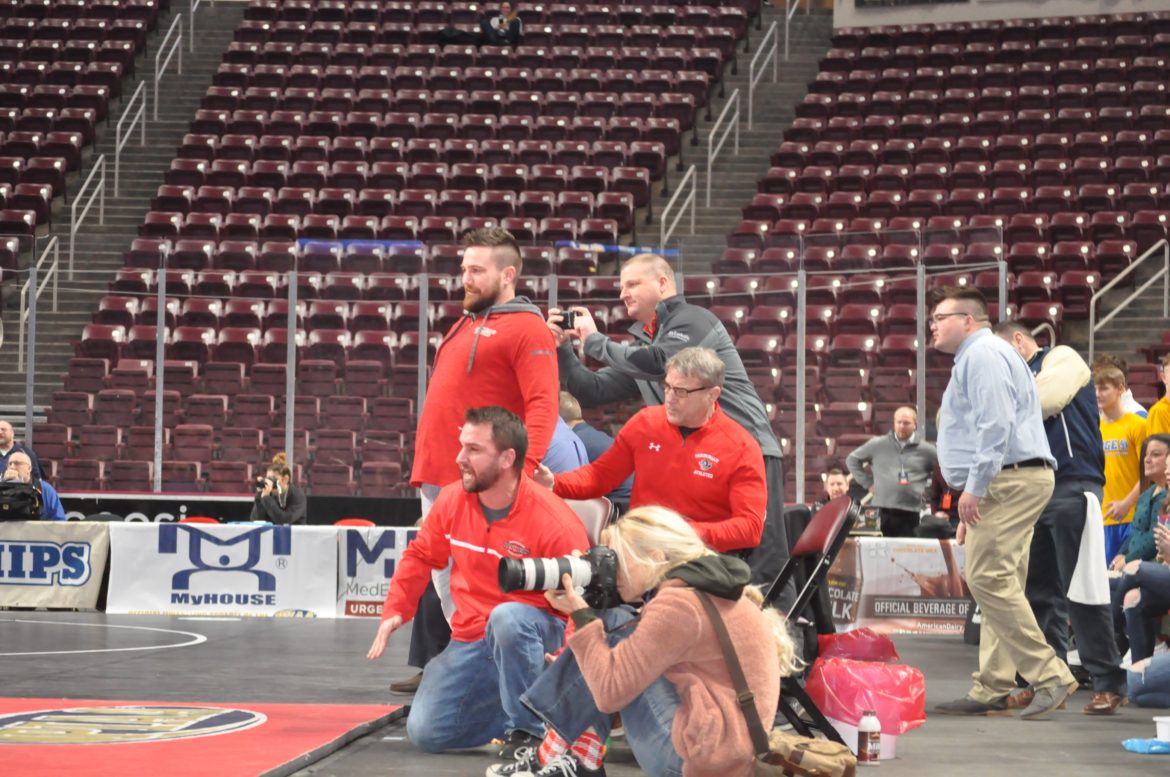 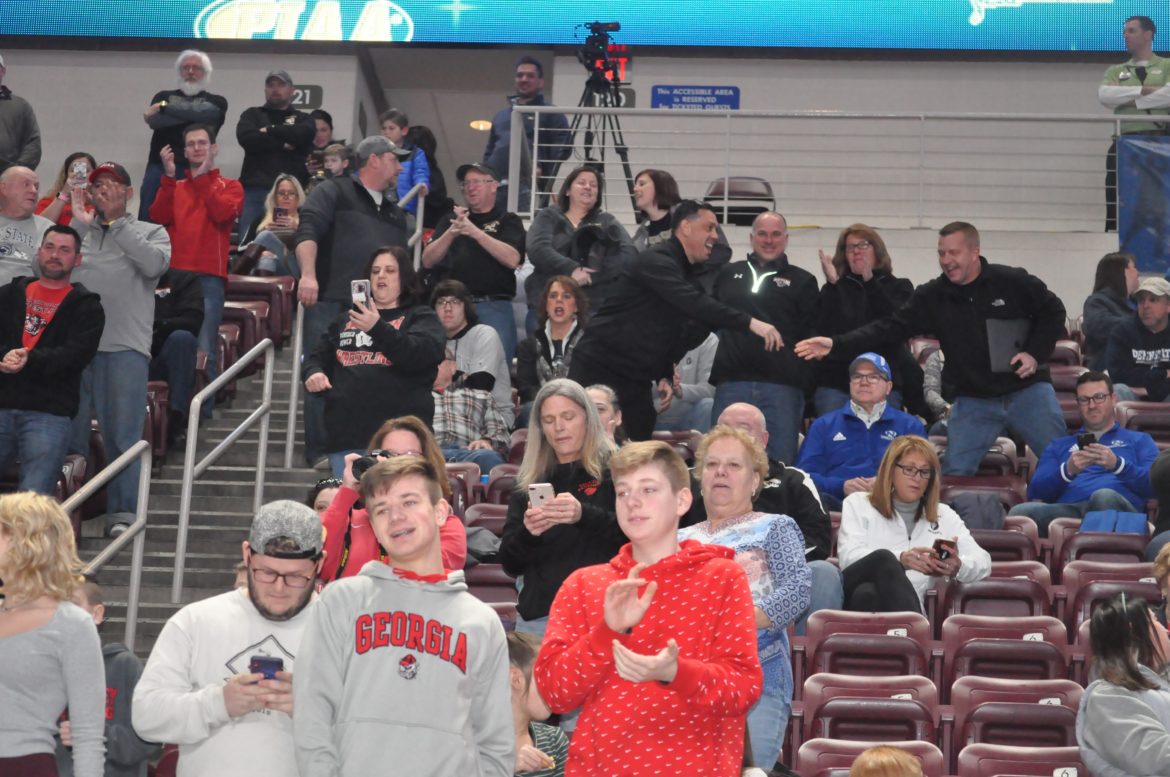