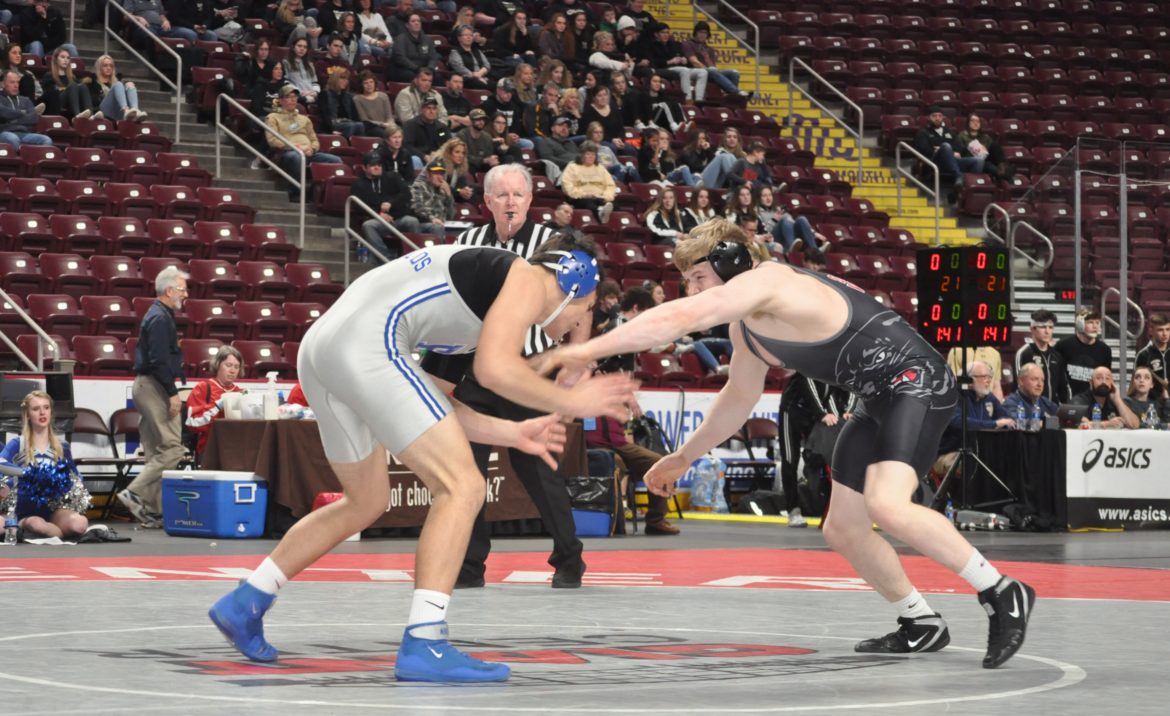 Dane Csencsits got the Panthers off to a great start against the Reynolds Raiders in the 2020 PIAA state semifinals.

It was playing out to be an old-fashioned Friday night fight inside the Hershey Giant Center when the Saucon Valley Panthers squared off against the Reynolds Raiders.  Reynolds has won the past three PIAA team titles at Hershey and was surely looking for their fourth.  Saucon Valley was banking on taking down the champ with a break-through moment.  The Raiders were able to advance to the semis with a 47-20 whoopin’ over Forest Hills.  Saucon entered the semifinals by way of beating the Burrell Buccaneers.  With two powerful programs staring each other down, neither team could ill-afford to get caught peeking ahead toward tomorrow’s championship final.

With the match starting at the 182-pound weight class it was the Panthers who connected with the first punch and drew blood.  Saucon senior Dane Csencsits (32-5) took on Reynolds heavy-hitting senior Bryce McCloskey (28-4).  Csencsits hit a couple of slick takedowns and built a 4-0 lead heading into the final period.  McCloskey was able to escape but Csencsits kept applying his offensive pressure for two more takedowns.  Csencsits looked great and came through with an 8-2 decision. 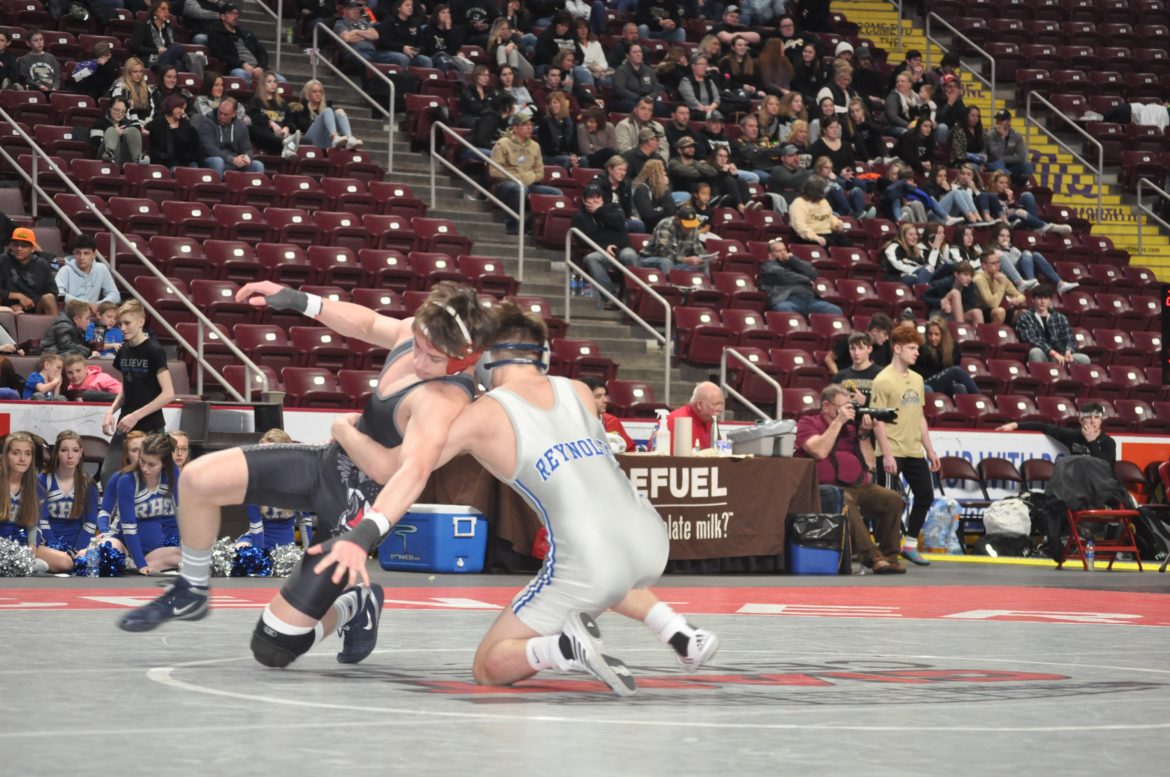 Saucon Valley’s Chris Arciuolo tried to get the Panthers going, but fell in overtime.

The Panthers’ feel-good moment was short-lived, however.  Reynolds mowed down the Panther lineup by winning eight straight bouts.  The Raiders picked up falls at 220 and 106.  Reynolds also gathered decisions at 195, 285, 120, 126 and 132.  In addition, the Panthers injury-defaulted at 113.  After nine bouts Saucon was running on fumes and trailed 33-3.

Jake Jones working for some back points.

The Panthers were finally able to answer by winning consecutive bouts at 138,145 and 152.  Using eight takedowns, freshman phenom Jake Jones tossed his Raider opponent around to the tune of a 21-6 technical fall.  Thomas Spirk followed his teammate’s lead and fired up his tilt-a-whirl.  Spirk combined three takedowns with an assortment of dizzying near-falls and walked away with a 17-2 tech-fall. At 152, freshman Ty Pfizenmayer controlled his match and pitched an 8-0 shutout for a major-decision.  Even though the Panthers went on a little run and cut into the lead, the Raiders did a pretty good job of limiting the damage and not giving up any home-runs. It was too little, too late for the Panthers.  Sitting on a sixteen point deficit with only two bouts remaining, Reynolds chose to forfeit to Ty Csencsits (160) and Matt Arciuolo (170) making it a 33-29 final. 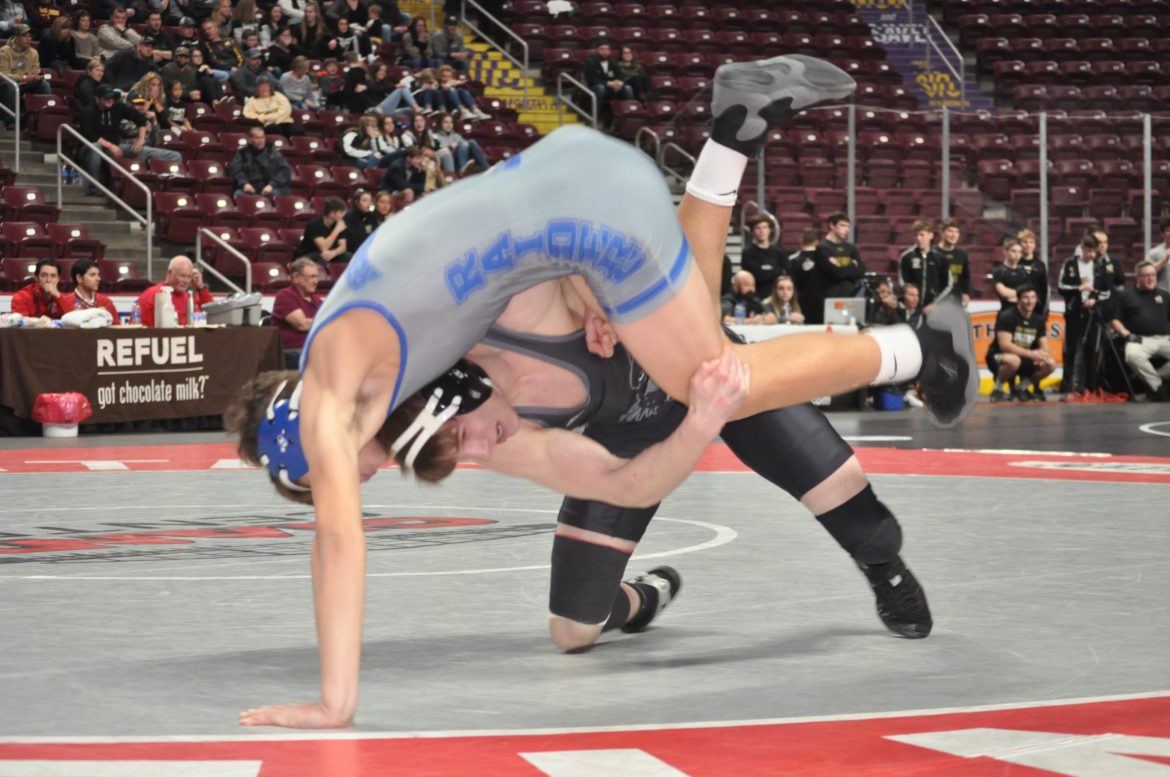 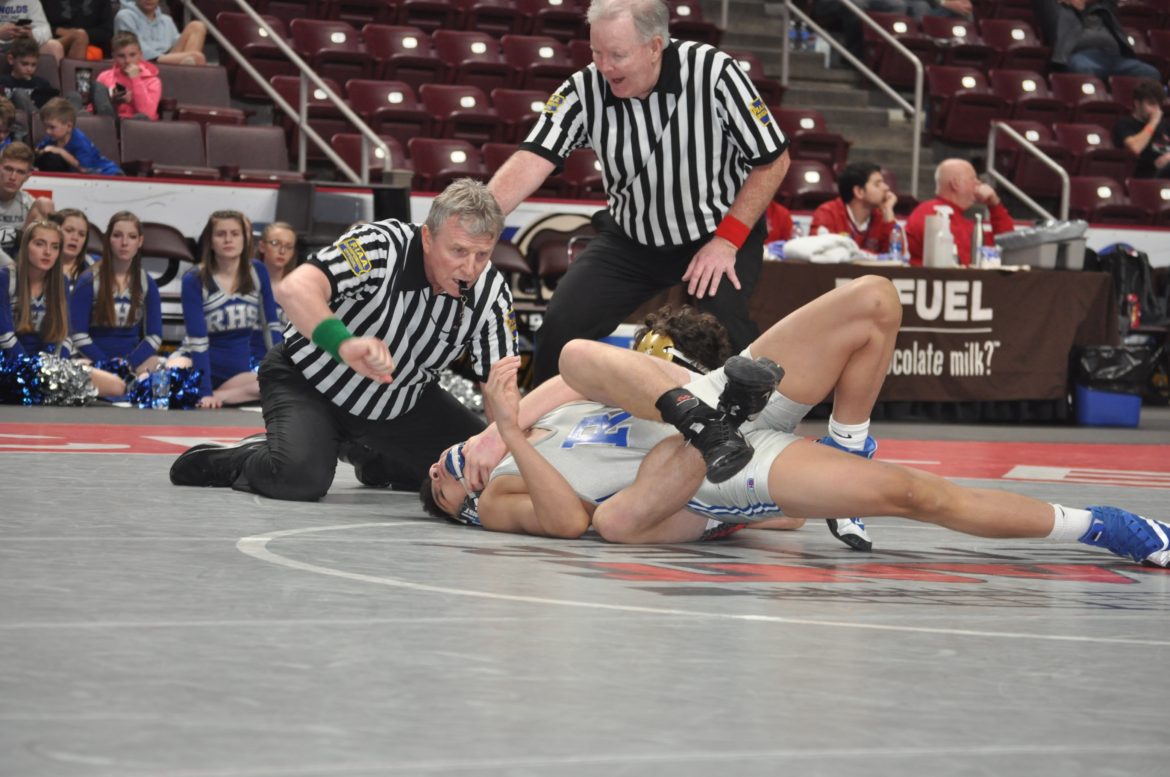 Panther freshman Ty Pfizenmayer looking for a fall as time expired in the period.

Up Next:   The Panthers now drop to the consolation bracket and at 11 a.m. will take on the Brookville-Notre Dame Green Pond winner.  A win there will give Saucon the  opportunity to wrestle for 3rd-Place.