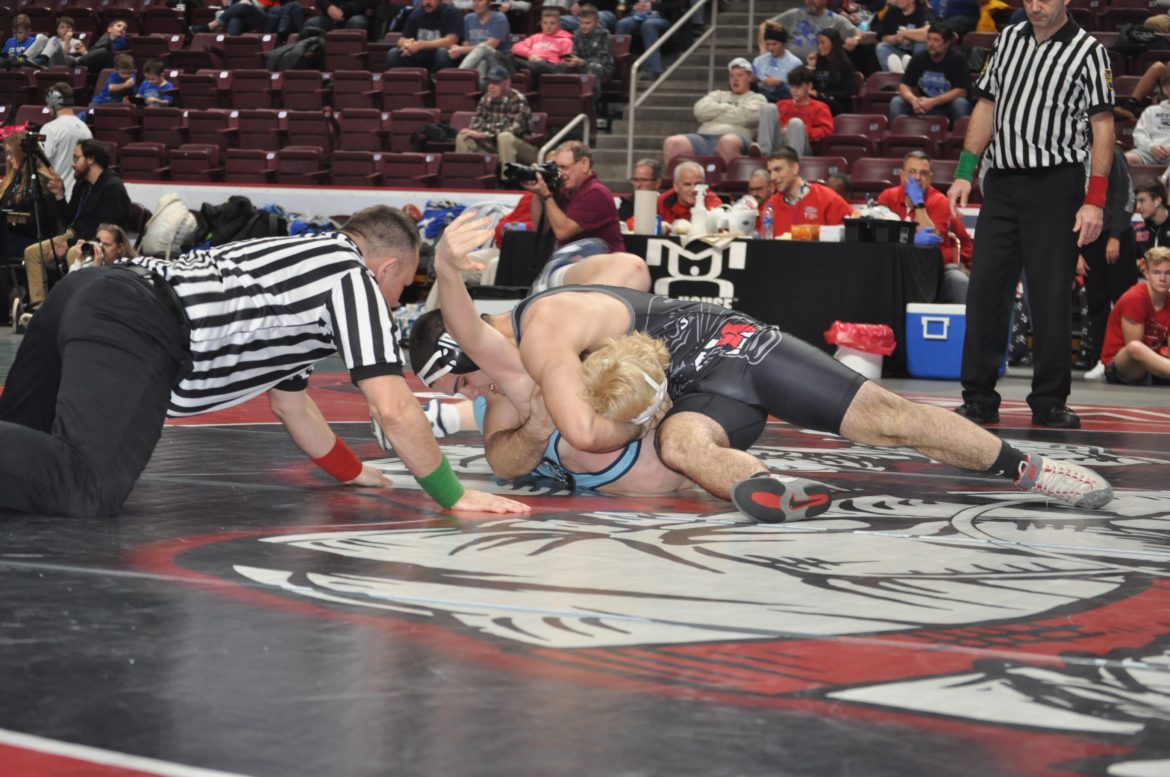 Braydyn Lugardo picking up a first-period pin for the Panthers in the 2020 PIAA quarterfinals.

In the 2019-2020 quarterfinals of the PIAA team wrestling championships, the Saucon Valley Panthers went to war against the Burrell Buccaneers.  It was a battle of the #1 seeds representing District XI and District VII.  Saucon advanced into the quarterfinals by defeating Line Mountain 53-18 while Burrell punched their ticket with a 46-21 victory over Montoursville.  On this day at Hershey’s Giant Center, it was tight and it was brutal. But, in the end, the Panthers busted up the Buccanneers for a 39-29 win and advanced into tonight’s semifinal. 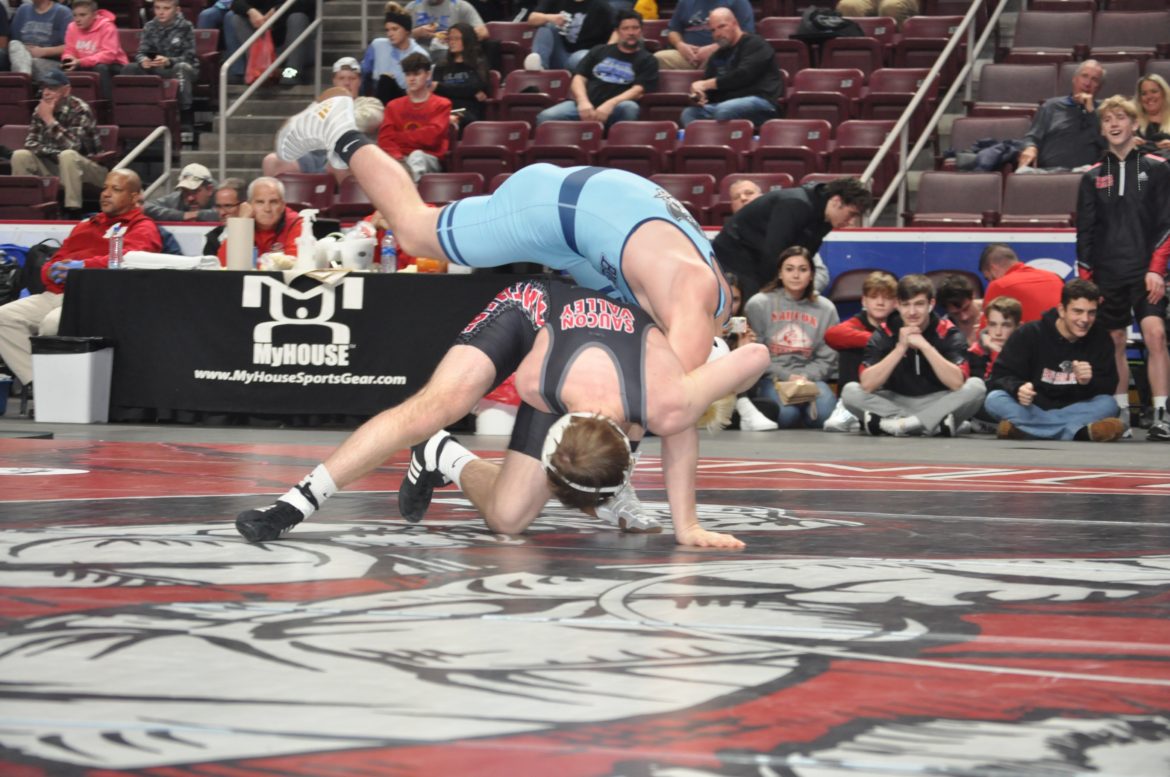 Saucon Valley benefitted from first-period falls courtesy of senior Braydyn Lugardo (195) and freshman Jake Jones (138).  Lugardo came out on the attack and mauled his Buccaneer for six. Jones took his opponent down to his back twice to take a commanding 9-1 lead.  Then, the third time was the charm as Jones flattened his opponent for the pin. 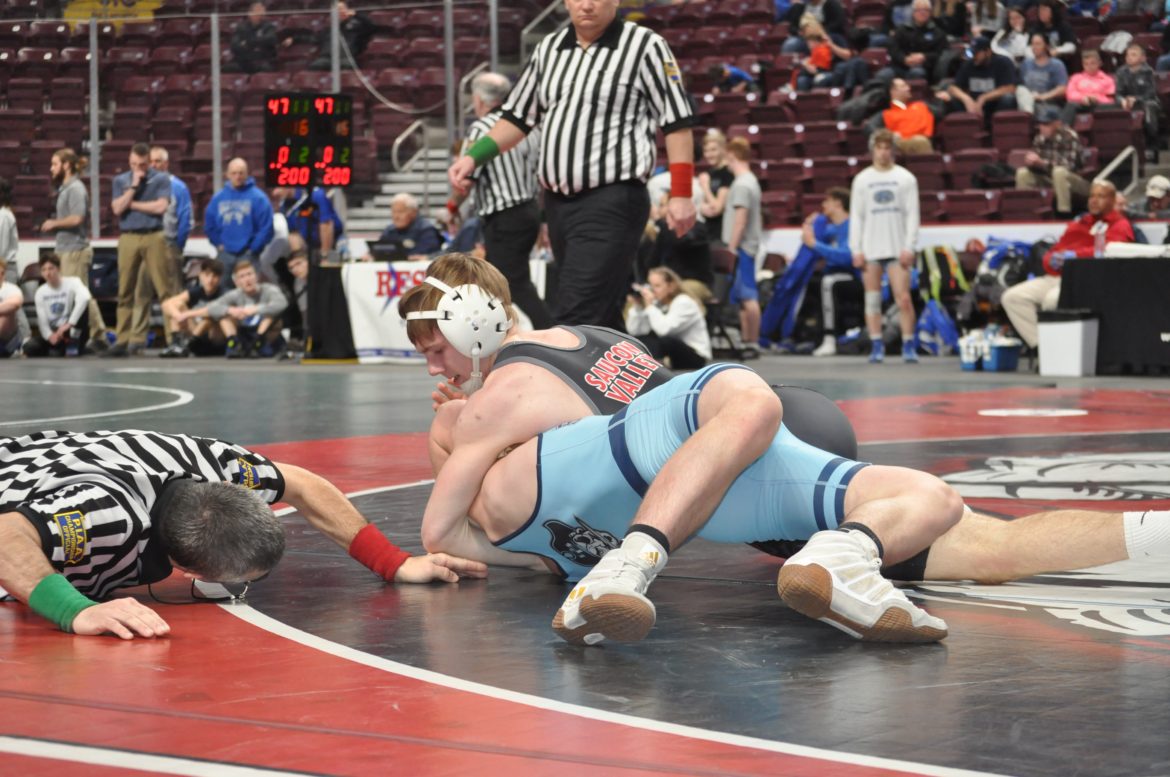 More bonus points were added to the Panther side of the scoreboard through the determined efforts of senior classmates Matt Arciuolo and Thomas Spirk.  Arciuolo earned his victory take-him-down-let-him-up style.  Using eight takedowns and two near-fall turns, Arciuolo scored his tech-fall victory.  Spirk used a different recipe as he had one takedown with five separate near-fall turns to register his tech-fall with four seconds remaining in the first period. 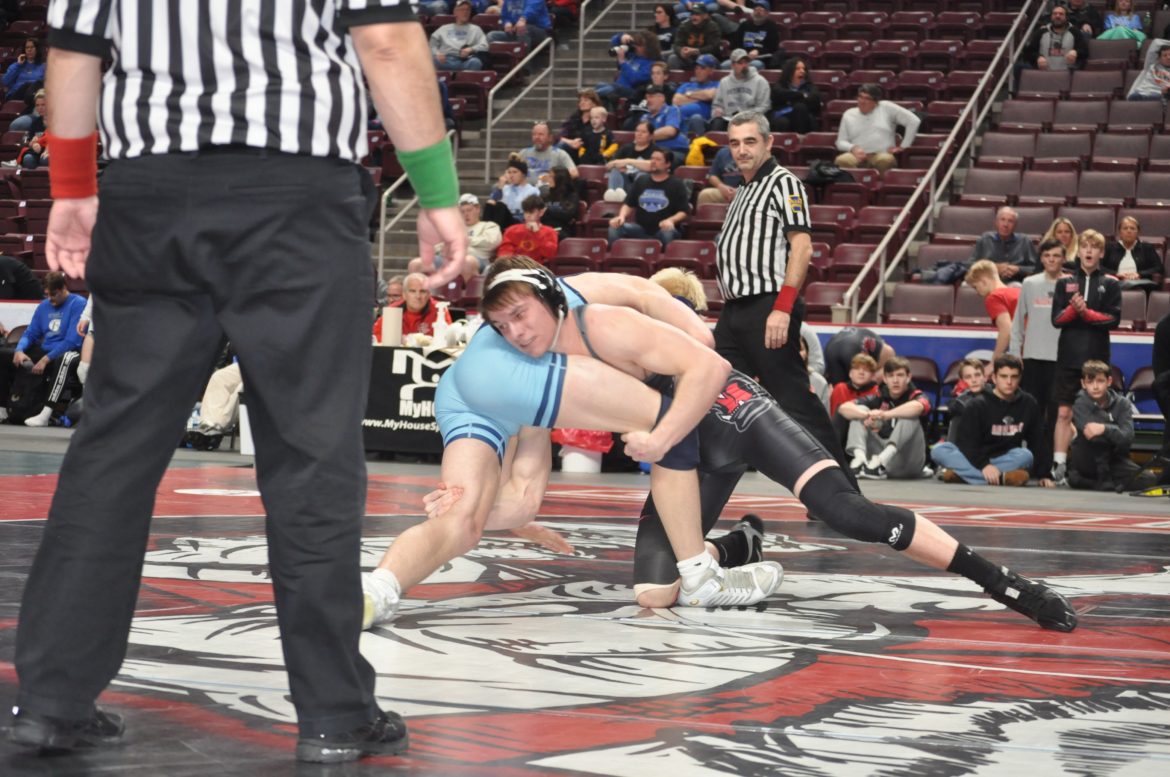 In addition, Dane Csencsits (182) and Cael Markle (126) contributed generously to the Panther cause.  Csencists, a three-time state qualifier who will be wrestling at Pitt next season, built on a 6-4 first- period lead to enter the final period with an 11-5 advantage against Burrell senior Ricky Feroce (24-8).  He finished strong with a takedown and near-fall for a 15-6 major.  Markle, a sophomore, put together a couple of five-point moves and then coasted through the third period for a 10-1 major-decision. 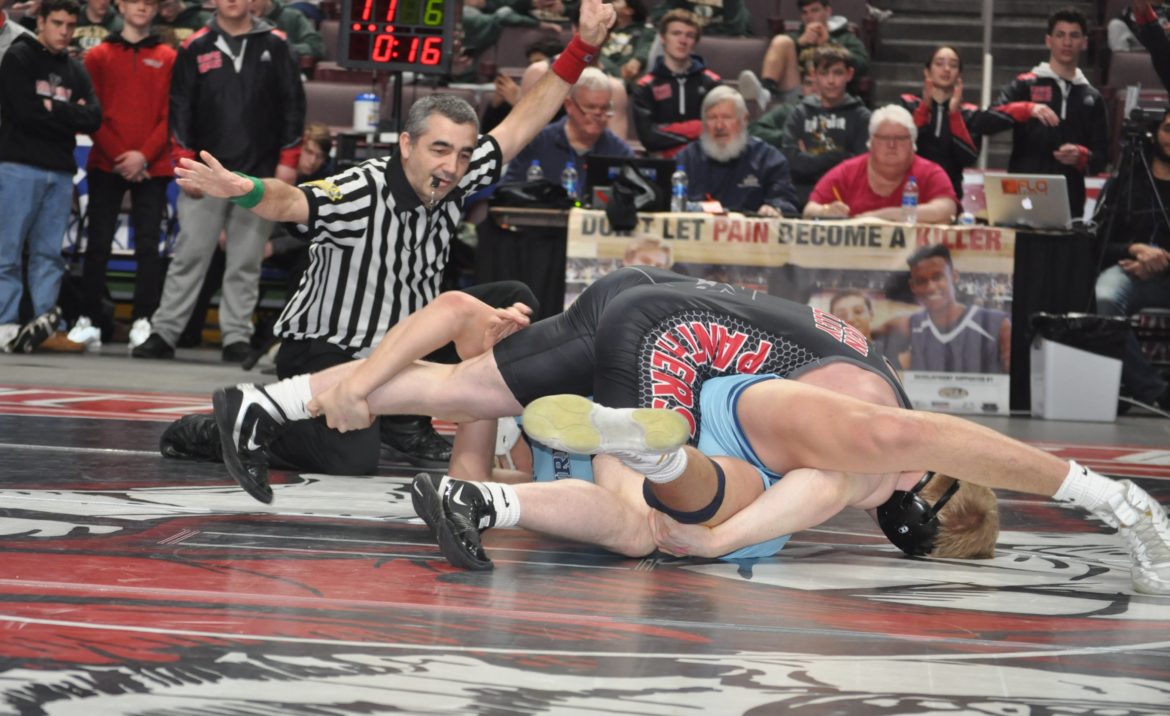 The Panthers Dane Csencsits started strong and finished strong against the Burrell Buccaneers in the 2020 PIAA team wrestling quarterfinals.

Aside from forfeit points awarded to Nick Warnke (285), sophomore Ty Csencsits gutted out a 6-5 decision to round out the Panther points. The younger Csencsits was cleared to wrestle about two weeks ago after sustaining an injury during the football season.  He is still unbeaten and only going to get better! 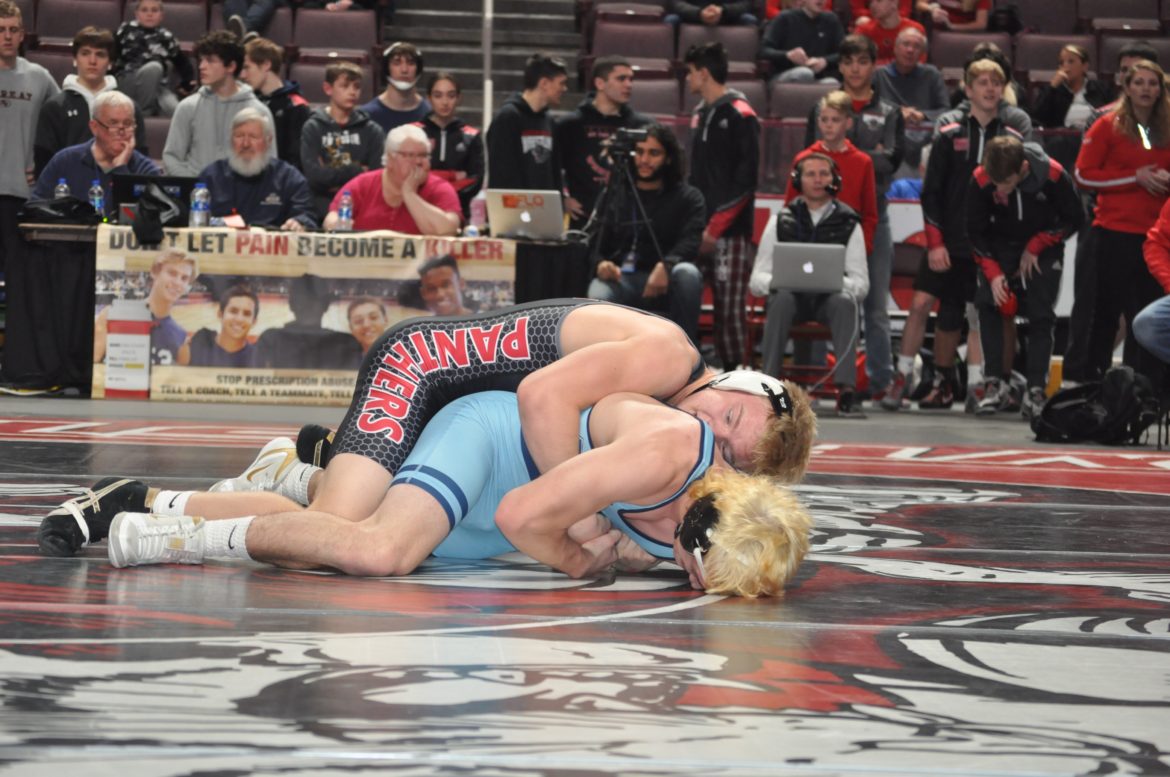 Ty Csencsits holding on for the win against Burrell’s Noah Linderman (24-10).

Burrell recorded falls at 106 and 220 to go along with a couple of major-decisions at 113 and 120.  In addition, the Bucs picked up a decision at 132.  Saucon Valley conceded the last bout of the contest to the Bucs  which made the final score 39-29 in favor of the Panthers. 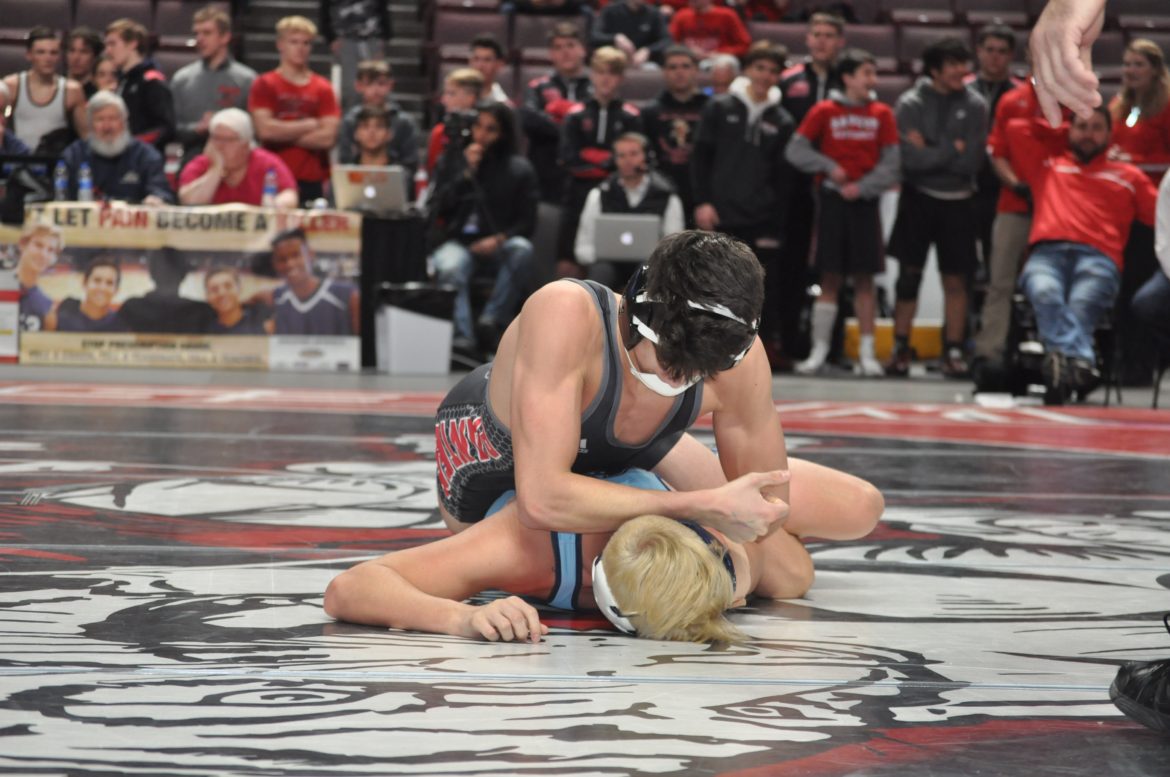 Saucon sophomore Cael Markle wrestled tough and came up big with a 10-1 major-decision.

Up Next:   The Panthers now advance into tonight’s semifinal against the Reynolds Raiders (8 p.m.).  The Raiders, out of District X, are the PIAA three-peat champs and have no shortage of heavy-hitters up and down their lineup.  This is gonna be good!