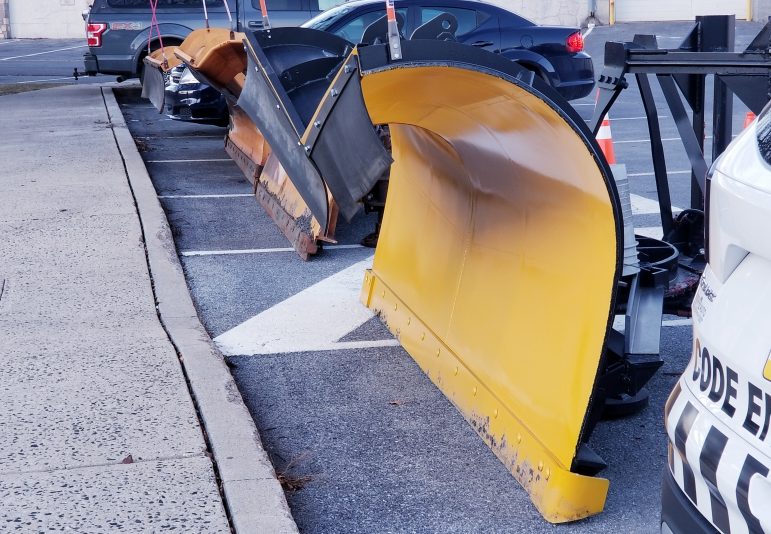 Snow plows sat at the ready in the parking lot outside Hellertown Borough Hall Friday. The National Weather Service has steadily increased its forecast snowfall totals for the Lehigh Valley area since Saturday, moving them from 6 to 9 inches to 11 to 15 inches to 15 to 19 inches to 18 to 22 inches by mid-day Sunday. Late Sunday it was revised again, to 16 to 24 inches. A winter storm warning is in effect for Lehigh and Northampton counties from Sunday at 5 p.m. to Tuesday at 1 p.m.

Note: This story has been updated with additional information about snow emergency declarations in local communities as well as the forecast for snowfall totals.

The borough of Hellertown has issued a snow emergency ahead of a winter storm that’s expected to arrive Sunday evening and bring heavy snow to eastern Pennsylvania.

Sixteen to 24 inches of snow are now possible in the Lehigh Valley, according to an updated winter storm warning issued by the National Weather Service for 5 p.m. Sunday to 1 p.m. Tuesday. The warning covers Lehigh, Northampton and Upper Bucks counties.

A forecast discussion from the National Weather Service office at Mount Holly, N.J., indicated that higher snowfall amounts are possible, particularly in east central Pennsylvania, where it said heavy snow bands could set up.

“The heaviest snow is likely during the day Monday, when rates could exceed one inch per hour in the heaviest bands,” the 6 a.m. Sunday briefing said.

The snow emergency in the borough took effect at 12:30 p.m. Sunday, Jan. 31. Vehicles parked on snow emergency routes in Hellertown must be moved off them, or they could be towed.

The borough’s snow emergency will remain in effect until further notice. 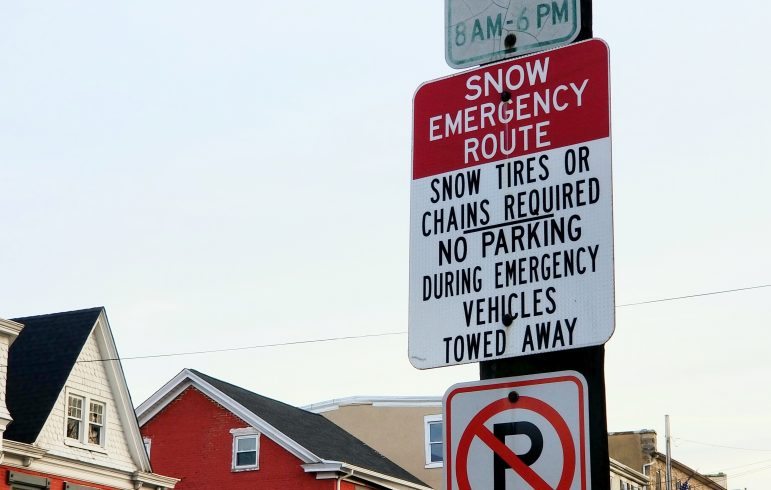 A sign in the 600 block of Main Street in Hellertown advises vehicle owners of the potential consequences of parking there during a snow emergency. The borough declared a snow emergency effective at 12:30 p.m. Jan. 31. (FILE PHOTO)

Borough officials also asked residents with driveways to park in them–instead of on their street–if possible, and reminded residents who live next to fire hydrants to keep them free of snow and ice.

“For those residents on secondary, non-emergency routes, please make every attempt to remove your vehicle from the street or with your neighbors to park all vehicles on one side,” an email from the borough said. “Do not park within 15 feet of an intersection or 20 feet of a stop sign. This will allow our plows to more thoroughly remove snow from the street and intersection.”

For residents who live along snow emergency routes, the borough is opening its public parking lots if they need to use them. The lots are located at Water Street Park, Dimmick Park, Tobias Drive and the Hellertown Post Office (Delaware Avenue). Residents are advised that if they opt to park in them, they do so at their own risk.

The borough of Hellertown has also announced that Monday’s garbage collection has been postponed until Tuesday, Feb. 2, although that is also subject to change.

Light snow began to fall across the area around 11:30 a.m. Sunday–earlier than forecast–and the National Weather Service said it could continue through early Tuesday morning, with “the highest snow totals and snowfall rates…most likely to occur late Monday” in the Lehigh Valley.

“Travel could be very difficult to impossible,” the NWS warned Pennsylvanians. “The hazardous conditions could impact the morning or evening commute (Monday).”

The website Pennsylvania Weather Action put out a second call forecast Saturday afternoon in which it noted that the storm could produce snow for a period of 30 to 40 hours, which forecaster Chris Corrigan said “is almost unheard of.”

The site’s latest snowfall total map puts the Lehigh Valley in a zone Corrigan expects to receive 14 to 18 inches.

“This snowfall will be on the light to moderate side, but thanks to cold temperatures, snowfall ratios will be greater than the typical 10:1,” he noted.

For more information about snow emergencies and snow removal in Hellertown, visit the borough website. Residents can also register to receive email notifications, and follow the borough on Facebook for updates.

Coopersburg borough has also declared a snow emergency that will take effect at 5 p.m. Sunday, Jan. 31 and remain in effect until at least 12 noon on Tuesday, Feb. 2.

In a recorded message that went out to emergency notification subscribers, borough officials asked residents to begin removing vehicles from designated snow emergency routes before the declaration takes effect.

In Fountain Hill borough, officials announced that a snow emergency would take effect at 6 p.m. Sunday.

“During snow removal operations, parking is prohibited in all cul-de-sacs and dead-end streets to allow public works to effectively clear the streets,” an email announcement about it said. “In addition, residents are encouraged to remove parked vehicles from ALL roadways to aid Public Works’ snow removal efforts, and are also encouraged to stay off the roadways and avoid travel unless absolutely necessary.”

Residents who live near fire hydrants are asked to assist local volunteer fire companies by removing accumulated snow and ice from around them.