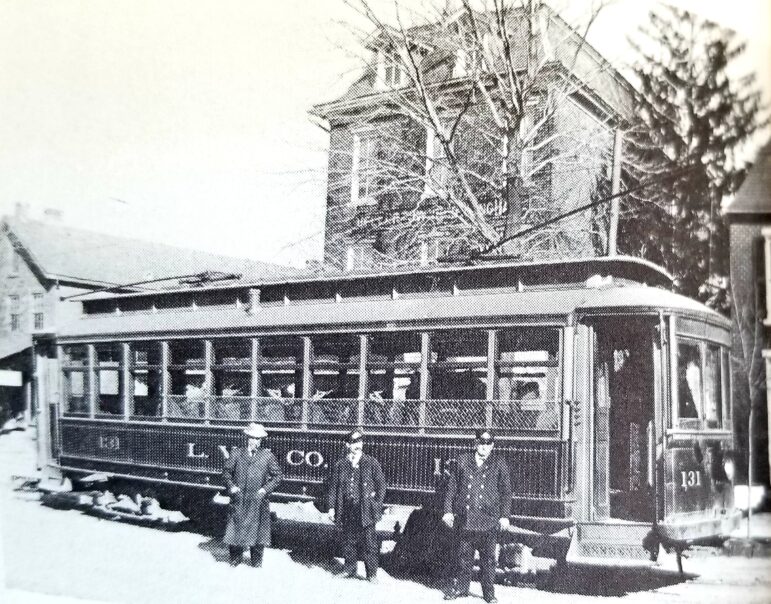 A Lehigh Valley Transit Co. streetcar photographed at Main and Durham streets in Hellertown in 1905, eight years after service on the line between Hellertown and South Bethlehem began.

In 1897, it was big news that a new trolley line would connect Hellertown to South Bethlehem, effectively making it much easier to travel between the two communities. In the following article, which was published on the front page of the Allentown Leader on March 29, 1897, it is noted that “the people of Hellertown…have long been clamoring” for a rail line that would connect them to the larger town, and furthermore that there was excitement in the borough when the builders of the line visited Hellertown to scope out the planned route. Yet by the end of the year–just a few weeks after the line entered service–many in Hellertown had apparently soured on the improved accessibility. An article published on Dec. 27, 1897 details the community’s response to “hoodlums” they believed were riding the trolley into town and causing trouble. Perhaps it was an early case of “be careful what you wish for,” at least in terms of transportation innovations.

The trolley line was formally opened on Dec. 9, 1897, as detailed in the second article below, which was also a front page story in the Allentown Leader. The story notes that the trip from Second and New streets in South Bethlehem to Hellertown took 45 minutes.

“The formal opening of this line was the greatest event in Hellertown for many years and the town was gaily decorated,” it stated. “Business was suspended and nearly every resident turned out to welcome the builders of the road and their guests. Every house along the line of the road, within the borough limits, was adorned with flags.”

Unfortunately no photos of the opening were published with the story. If any exist, they would certainly add to the interpretation of this important event in the borough’s history.

The Bethlehem-Hellertown streetcar line remained in service until the early 1950s, when the rise in automobile ownership coupled with a booming post-World War II economy led to its demise, along with that of the system of lines that existed throughout the region.