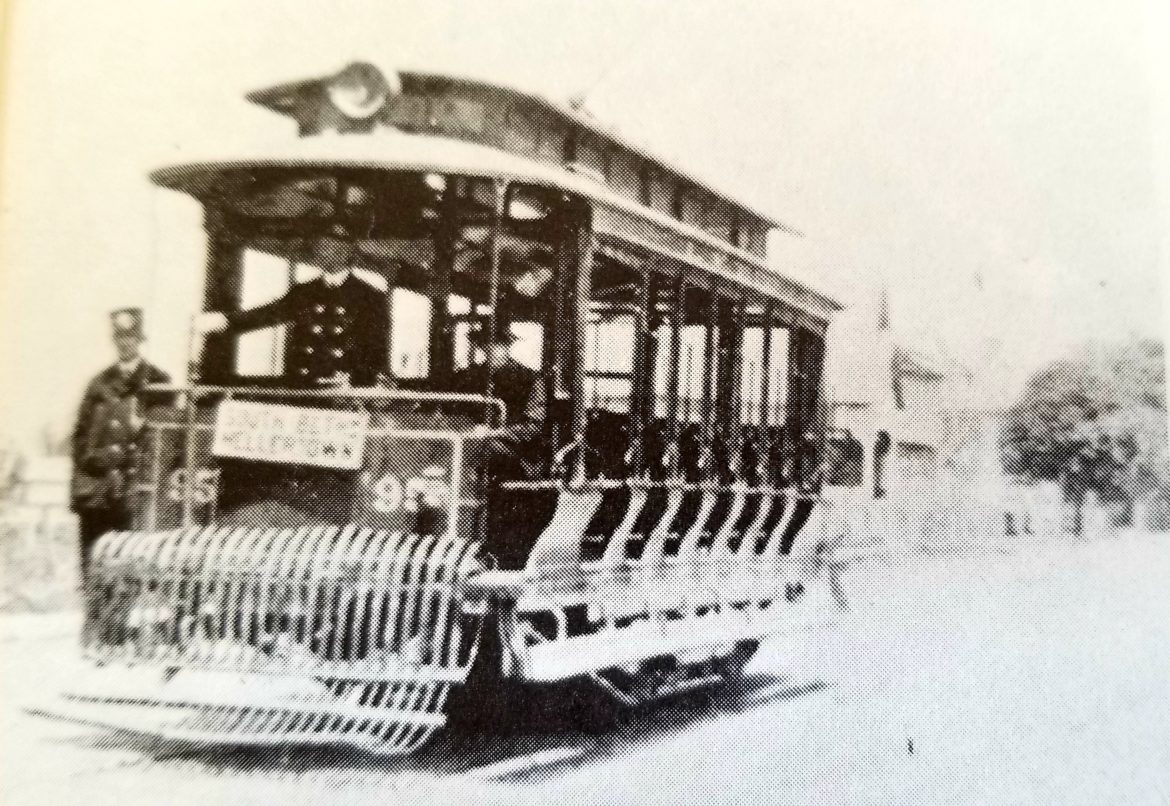 A streetcar traveling from Hellertown to South Bethlehem, photographed on Main Street around 1900. 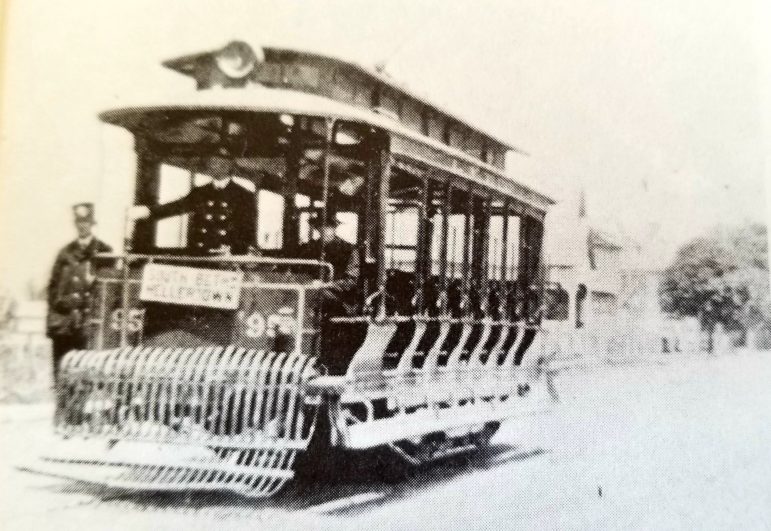 A streetcar traveling from Hellertown to South Bethlehem, photographed on Main Street around 1900.

Fans of public transportation still lament the demise of America’s streetcar era in the early 1950s, when automobiles, buses and post-World War II prosperity together combined to spell their demise.

The streetcar era in Hellertown came to an end in October 1952, when the last trolley left for Bethlehem and the few remaining passengers rode into history.

On May 3, 1897, borough ordinance #45 granted the South Bethlehem and Hellertown Street Railway Company the right to construct and operate an electric railway within the borough. The entire ordinance is somewhat lengthy. However, it is interesting to note that it stipulated that all poles had to be painted, no coal or freight cars were to use the railway, no trolley was to exceed an eight miles-per-hour speed limit, the fare was not to exceed five cents, the company was not to use salt to keep its tracks clear in winter, the constable was to ride free of charge on any cars within the borough limits and the trolleys were to run seven days per week at intervals of not more than forty minutes between the hours of 5:30 a.m. and 12 midnight. Also, when construction was to begin, not more than 500 feet of Main Street was to be torn up or in disorder at one time.

Work on the construction of the line did not begin until Oct. 4, 1897. In the five month interval, indecision on the part of the traction company on building the line added more frustration upon the residents who had been waiting for nearly two years for the line. Town council had been asking for trolley service since 1896 and in December of that same year attorney Russell Koplin presented traction officials with a petition bearing between 300 and 400 names. The town waited so long that its arrival became the subject of numerous jokes and betting.

Once work began, however, it didn’t take the traction company long to lay the entire line. The first car ran over the new road on Nov. 13, 1897, with Messrs. Pascoe and Crilly (transit officials); Burgess George B. Deemer; Hon. Jeremiah S. Hess, and Borough Secretary A. J. Welker occupying the car. Their trip started on Green Street (now Magnolia and Main) and ended at Union Station in South Bethlehem. All along the way the car was greeted by people who stood at their doors and gates to see the big event. Service on a regular schedule did not begin until Dec. 9, 1897, the transit company having to await the arrival of new cars. 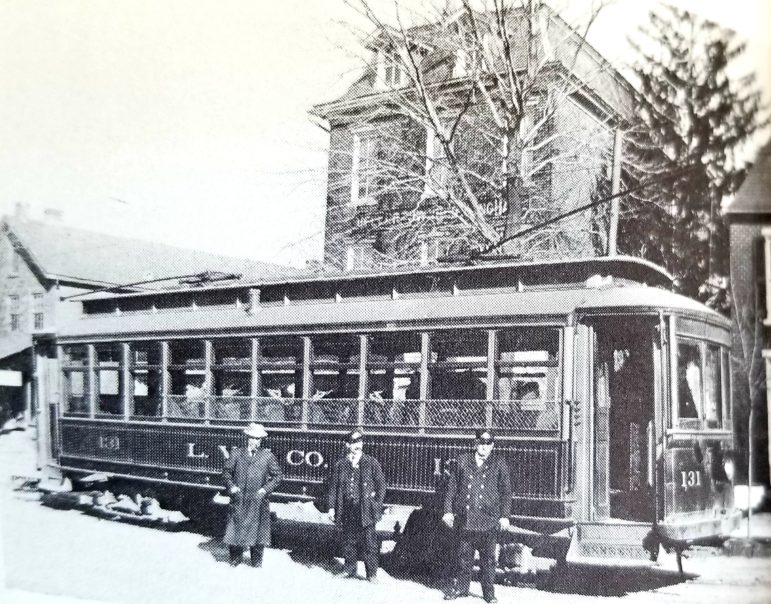 A Lehigh Valley Transit Co. streetcar photographed at Main and Durham streets in Hellertown in 1905.

Later, starting on July 27, 1898, a short spur was built from Main and Penn streets to Rentzheimer’s cave (now the area of Lost Cave) which was a popular picnic and camp meeting area of that time. This spur was in use only a very short time and in 1902 borough council requested that the abandoned tracks be removed. Only last summer (*in the summer of 1971) borough road crews uncovered a portion of these rails while working near the present fire house. 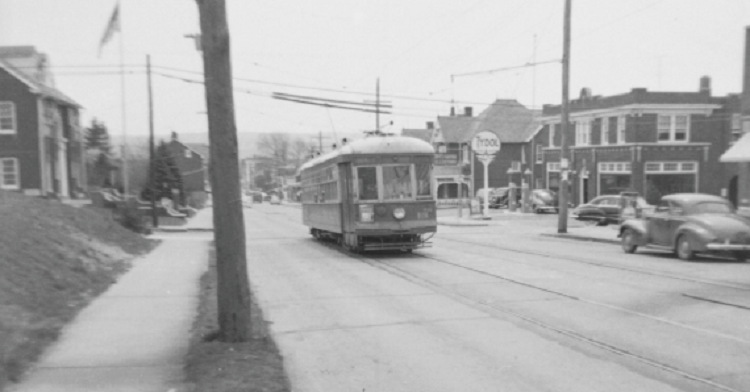 A trolley travels north on Main Street in Hellertown in a rare 1940s photograph that was taken near the end of the streetcar era.

As in the case of many things in our rapidly changing times, the trolley era was eventually to come to an end. The Depression of the 1930s, the heavy demand on the equipment during World War II and the competition of privately owned autos forced the transit company to phase out the electric streetcar and substitute buses. The last trolley from Hellertown left the south end of town near Midnight on Oct. 26, 1952. For over a half century the trolleys had provided a convenient and reliable mode of transportation for the town’s workers, shoppers, and general users. 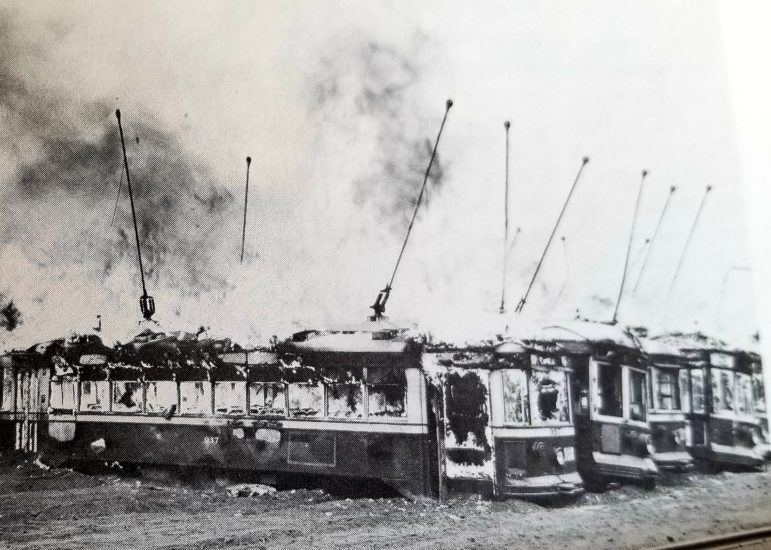