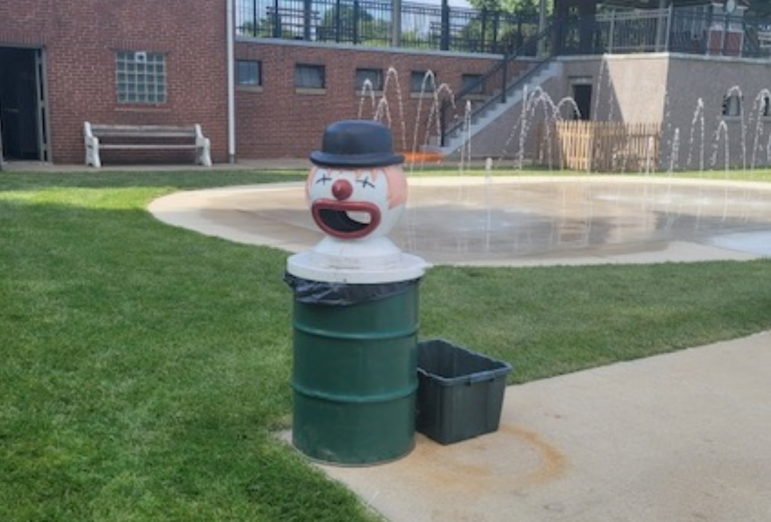 NO LAUGHING MATTER: Hellertown residents are upset about the theft of one of the pool’s vintage ‘clown’ garbage can lids, which was announced Monday on Facebook. Borough officials said the jovial likeness of a laughing jester disappeared Saturday night.

UPDATE: At least $300 in reward money is being offered by police and local business owners for or any credible information which leads to the arrest and conviction of the individual(s) responsible for the theft of the clown head garbage can topper. After the Hellertown Police Department announced a $100 reward in a Facebook post Monday, the Lower Saucon Police Association announced that it would contribute $100 toward the reward fund. A local business owner, Kevin Branco, also committed $100.

It isn’t every day that the Hellertown community unites behind a clown, but that’s exactly what happened Monday, after borough officials announced that an iconic garbage can lid shaped like a laughing clown’s head was taken from the pool sometime Saturday night.

How someone was able to conceal the large metal clown’s head in order to get it out of the gated facility is unclear, but news that it was stolen quickly elicited strong reactions.

“There is no reason for this!” he said. “Our borough was not built on disrespectful, pathetic and repulsive persons that steal for self satisfaction!”

Heintzelman, who as mayor oversees the police department, then issued an ultimatum.

“Return this now or pay the consequences!” he warned whoever took the jovial receptacle covering. “To jump a fence and steal this piece of our property–we are coming for you!!!”

For other Facebook users, news about the garbage can lid theft brought back memories.

“I have great memories of these lids…as a former resident and at my summer job with the Borough,” wrote Steven Bassett. “They are heavy, they are iconic and they don’t belong anywhere but poolside or in the parks. Send back the clown!”

It was unclear how long ago the distinctive lids were introduced at the pool, but it may have been in the 1960s or 1970s, as numerous middle-aged adults commented that they were a recognizable part of the swimming pool grounds when they were small children.

Emotions regarding the pool may also be running a bit higher than normal, due to the fact that it reopened for the first time in nearly two years less than a week ago. 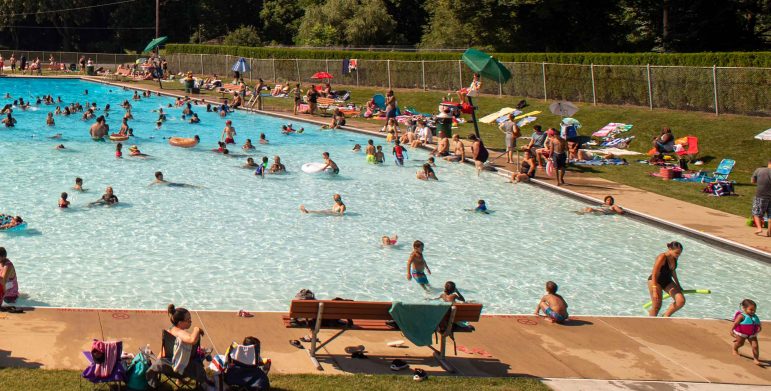 The Hellertown Pool is a popular spot for summer fun. Part of its appeal comes from its vintage appearance. Built in the late 1930s, the pool has served generations of Hellertonians, who are both nostalgic about and protective of it. (FILE PHOTO)

The pool was closed for the entire 2020 season due to the coronavirus pandemic, and opened about two weeks later than normal this year due to a lifeguard staffing shortage.

With the area under a National Weather Service heat advisory Tuesday and Wednesday, and real-feel temperatures forecasters expected to reach the triple digits, the pool is likely to be packed. It won’t be the same, however, until the missing memorabilia is returned.

The pool is open daily from noon to 7 p.m., weather and pool conditions permitting.

Anyone with information about the missing clown-shaped garbage can lid should contact Hellertown Police by calling 610-759-2200, which is the Northampton County call center’s non-emergency line.