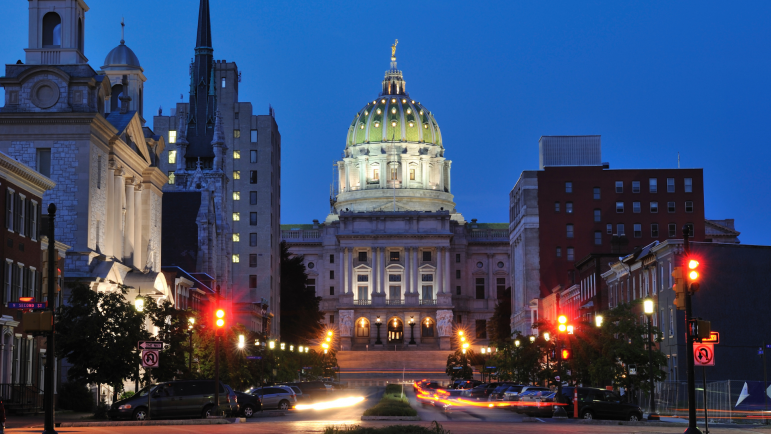 The Pennsylvania State Capitol in Harrisburg

It is no secret that political tensions are at a tipping point. We as Americans are at clear odds with a litany of issues pertaining to partisan politics, and in many cases, with each other. In a world of R’s and D’s, it’s hard to figure out what is objective information and what is grandstanding; what is outlandish conspiracy theory and what is fake news. The latest partisan battle has landed at the very foundation of our democracy–voting.

This week, the Pennsylvania State House of Representatives voted along party lines, 112-89, to overhaul our voting system; a system that has already seen major changes in recent years. HB1300 is promoted by the state GOP as a sweeping bill aimed at establishing more transparent voting procedures and providing much-needed security to ensure our vote has been counted in a fair and unbiased manner. Conversely, Democratic lawmakers have criticized the bill as a blatant attempt to change voting laws to favor Republican voters, and require a more cumbersome, prohibitive system of picking candidates.

HB1300 establishes a Bureau of Election Audits within the state Auditor General’s office. This bureau’s sole responsibility would be to oversee the election system transition from ballots and voting machines to ballot counters and poll watchers. This responsibility currently resides at the county level. At the county level, officials can act swiftly and appropriately to address any community-specific issues related to voting that may arise. HB1300 also reduces the window for mail-in balloting by roughly half, tightens the voter registration window, increases ballot drop box security and requires them to be placed in specific locations (based on population density) and always overseen by county officials.

If enacted, the bill would require voters to show a valid ID every time they cast their vote. This is a major sticking point in the debate; critics say it adds another barrier to exercising Americans’ constitutional right to vote. Currently, voters are required to show ID on their first trip to a voting location, with every subsequent election requiring a signature to compare to the original handwriting. In the case of mail-in voting, it would continue to require a driver’s license or state-issued ID number. Additionally, the voter would be required to provide the last 4 digits of their Social Security Number.

Critics have been vocal about several issues they have with these requirements.

The stricter requirements are going to disadvantage citizens who depend on mail-in voting, including the elderly and invalid, they say. It will also make it harder for new voters to participate in elections because the windows for voting by mail and voter registration will be abbreviated. Critics also argue that 24-hour surveillance of ballot drop boxes would also impose costly expenses on our local governments to establish ballot drop boxes will amount to an unfunded mandate, diverting money which could be used to address more pressing issues that have been plaguing the state for decades. According to a GOP appropriations committee analysis, implementing HB1300 will cost approximately $80 million up front, and cost taxpayers roughly $12 million annually.

It is rather peculiar that Republican lawmakers have taken such a stance on our current voting system. In fact, our current system of voting (while it is not, and never will be perfect) was codified barely two years ago, in 2019. At the time, voting reform was touted as a top priority of Pennsylvania’s Republican-led legislature. According to PAHouseGOP.com, the 2019 election overhaul bill was “the most comprehensive effort to modernize and improve Pennsylvania’s elections since the 1930s.” House Majority then-Leader Bryan Cutler said the “bill was not written to benefit one party or the other, or any one candidate or single election. It was developed over a multi-year period, with input from people of different backgrounds and regions of Pennsylvania. It serves to preserve the integrity of every election and lift the voice of every voter in the Commonwealth.”

So yes, political tensions are high at the moment, but it is up to us as citizens to educate ourselves in order for democracy to survive. Argument and debate are the foundation of our republic. Without it, representation would not exist and we would devolve into an autocracy, forced to comply with a supreme leader. Make the effort to inform yourself on the topics and the ever-changing positions that will shape our future, and finally, question the motives of those who are pushing for one particular side or another. Only when we are armed with this information will we be able to vote with confidence, and ensure our voices are heard in a safe, transparent manner.

Kevin Branco is the owner of Main Street Gym in Hellertown. He is a former candidate for state representative in the 131st legislative district. Opinion-editorials about issues of general local interest may be submitted to josh@sauconsource.com.