A post in the Hellertown, Pennsylvania Facebook group has ignited a debate about what entry-level workers should be earning in this area. The post was about a job opening at a diner that is offering full-time bussers $9 an hour (plus a free meal per shift; see below).

What follows in the comments on the post could be likened to the plot of the classic fairy tale, “Goldilocks and the Three Bears.” Some readers called that wage too low, while others argued it is an appropriate wage for a teenager or someone working to supplement a primary household income. Few seemed to think that $9 an hour (a bit more than both the federal and state hourly minimum wage of $7.25 an hour) is too much–particularly for an adult worker–but some readers said the starting wages currently being advertised by a McDonald’s restaurant across the street are too high.

McDonald’s has recently been offering starting pay rates of $12 an hour and up to attract workers, and many other local restaurants are doing the same because of a widespread staffing shortage that isn’t only impacting the restaurant industry. Pools are having problems filling lifeguard chairs. And some local restaurants such as Waffle House have even reduced their hours of operation, because they say they just can’t find enough workers to fill all their shifts.

On Saturday, in an email to members, one of the largest employers in the Saucon Valley area also acknowledged that the staffing shortage is affecting its ability to do business.

Steel Club announced that “due to the current staff shortage” the kitchen in its restaurant, the BeamYard, will now be closed Tuesdays (the BeamYard bar will remain open regular hours on Tuesday, which are 11 a.m. to 9 p.m.).

Faced with this historic worker shortage, what are business owners supposed to do? Refuse to pay workers more on principle, because some of their customers might be resentful of what the person serving them a burger or clearing their table is now earning?

That makes little sense; especially when it’s likely that many of the same people decrying the higher wages would also resent it if the impacted businesses reduced their hours further, or closed their doors altogether until they can find enough workers to reopen.

Certainly, we would argue, laissez-faire economic policy doesn’t just mean that government should be “hands off.” It also means that business owners have the right to follow whatever legal course of action is necessary to keep themselves in business. According to local commenters, however, neither government intervention nor the supply-side action of business owners responding to the crisis is acceptable, apparently.

What are the most common arguments against increasing the minimum wage?

Two which are frequently heard among Americans who say they’re opposed to that are:

Both of these arguments are rooted in the politics of fear and grievance that have become popular in the U.S. in recent years. Instead of the notion that a “rising tide lifts all boats,” they are arguments that essentially favor letting one boatload of workers sink, while another–filled with middle class workers–is constantly being bailed out and going nowhere.

Those arguing against a higher minimum wage fail to acknowledge that the nurse’s aide making $12 an hour or the warehouse worker making $20 an hour are also likely underpaid, depending on where they live.

There are different ways to calculate a “living wage” for a set geographic area. MIT has an online living wage calculator which allows individuals to measure and compare living wages for single adults, married adults and single or married adults with various numbers of dependents in various locations. Currently that living wage for a single adult with no dependents in the Allentown area is $13.46 hour, however that calculation may be out of date, since it is based on estimates for things like housing that do not seem realistic given the current market in the Lehigh Valley and the national inflation rate. 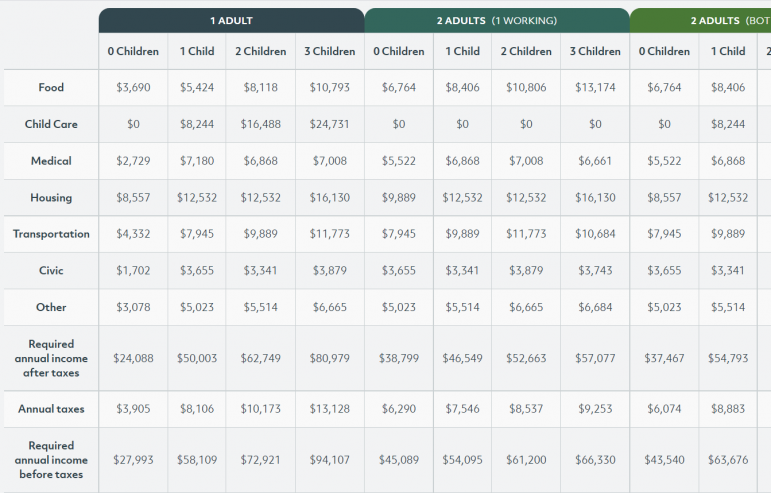 A screenshot of a graph from the Living Wage Calculator at MIT.edu shows what various types of people need to earn in order to have what is considered a living wage in the Allentown area.

If you currently own or rent a home in the Lehigh Valley–and certainly if you own or rent in the Saucon Valley area–you know that $700 a month doesn’t come close to adequately covering the costs of your housing–if you can even find housing at all in this market. A search for rentals in the 18055 zip code on Zillow Monday yielded no results. A search for Bethlehem area rentals produced 33 results, with the cheapest being $960 a month; well above the $700 the MIT living wage calculator estimates is adequate. The cost of owning a home is likely to be even greater, because it includes not only mortgage and interest payments but also the cost of insurance, taxes and maintenance costs. It is not unusual for Saucon Valley School District homeowners to pay $500 to $600 in property taxes alone each month, and the district’s taxpayers are not the highest-taxed in the county.

As of Monday, Zillow search results indicated that the most inexpensive home currently for sale in the Saucon Valley School District was listed for $269,900. That townhome in Hellertown borough comes with an annual property tax burden of approximately $7,000, per the listing. Once mortgage rates and other numbers are crunched, it would cost the buyer an estimated $1,441 per month, according to Zillow’s monthly payment estimate.

Clearly, a single person earning even $20 an hour at a full-time job–or approximately $42,000 a year before taxes–cannot afford such a home. How much can they afford?

How about a home with an annual property tax bill of $4,000 (good luck finding that in the Saucon Valley School District) with the same downpayment amount? That improves the buyer’s options somewhat, but their maximum purchase price is still just $132,639.

Does finding a home for that amount in the Saucon Valley seem like a realistic scenario for anyone at the moment?

It really isn’t, in the Saucon Valley and elsewhere, because according to Realtor.com the current median sale price for homes in Northampton County is $265,000. Most homes that are priced under the median sale price are receiving multiple offers, and selling for higher than the asking price.

And remember, these sample numbers don’t take into consideration the cost of having children. Once you add at least one dependent, even with two parents working full-time, the minimum hourly wage one adult must earn in order to make a living wage in the Lehigh Valley increases to $15.31, according to the MIT calculator. That’s higher than the proposed $15 federal minimum wage that has failed to gain enough support to become law in Congress. An effort to increase the minimum wage at the state level has also failed in Pennsylvania’s Republican-controlled state legislature.

At this point in the discussion, the arguments by those who oppose a living wage typically evolve into variations of the following:

Unfortunately, these arguments aren’t rooted in any kind of economic reality.

They don’t take into consideration the rising cost of living in this area–including housing in particular–whether the wage earner has dependents, or various other things, e.g. student loan debt. They not only demonize the individuals who want and deserve to earn a living wage, but also besmirch the businesses that are doing exactly what they have to do in order to find qualified workers, i.e. increase wages. Incidentally, that’s exactly how a free market capitalist society works. There is a low supply of workers, which means demand for them is higher, and when demand for something is higher it costs more.

Anyone who has a problem with what a business pays its workers can vote with their wallet. Hopefully in doing so, they will remember that this is a free country, which means workers also have a right to demand higher pay. Many of those who are now doing just that labored on the frontlines during the coronavirus pandemic, when they were exposed to a potentially deadly virus, while many of the individuals who arbitrarily believe they should be quietly grateful for earning whatever they do likely sat safely at home.

Similarly, employers have a right to see and determine value in paying workers more or to pay them more out of necessity; whatever the case may be.

Many discussions about wages on social media demonstrate a troubling disconnect from economic reality.

This country was founded on, among other things, the pursuit of happiness. Perhaps if more Americans in 2021 focused on pursuing their own dreams, instead of what others aspire to do and earn, everyone would benefit.