As the highly-transmissable Delta variant’s spread has coupled with falling vaccination rates, COVID-19 statistics around the U.S. and in Pennsylvania have taken a turn for the worse in recent weeks. And in Northampton County, where a key indicator of the virus’ spread has placed it at a Very High risk level, the numbers may be particularly troubling. 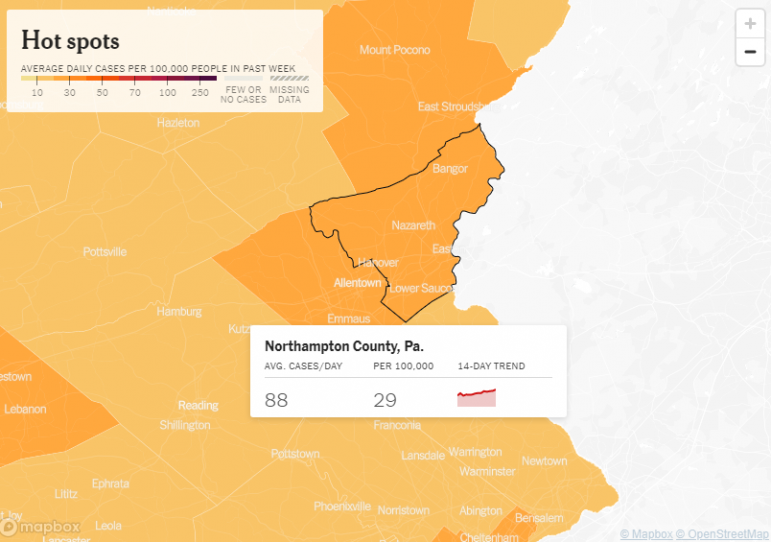 Credit: The New York Times/Fair use

A New York Times interactive map screenshot shows the number of new cases being reported per day per 100,000 residents in Northampton County. Currently the county’s daily new case count is the highest among Pennsylvania’s 67 counties.

Thursday’s 135 new cases of the coronavirus was the highest daily total reported since April 20. The spike is likely of particular concern to state, county and local health officials due to the fact that many unvaccinated schoolchildren are about to return to classrooms.

County officials have recently taken steps to help curb the spread, such as once again requiring the use of face masks in county-owned buildings. Northampton County also continues to operate a COVID vaccination and testing center for county residents.

Meanwhile, the three local health networks that are among the largest employers in the Lehigh Valley recently announced that they will mandate the vaccine for employees.

In 2020, Northampton County’s home for the aged–Gracedale, in Upper Nazareth Township–was the site of one of the worst mass outbreaks of COVID-19 in the state.

The National Guard was activated to help staff the facility, but there is no information to indicate that seniors in the county are facing the same or similar risks they did early on in the pandemic, when the coronavirus rampaged through numerous area nursing homes.

In the early phases of the pandemic the majority of severe cases leading to death were recorded among elderly populations. Since the Delta variant has become dominant in the U.S., however, more serious cases have been reported among younger groups of people.

Northampton County has reported seven COVID-related deaths so far this month, according to data from CovidActNow.org, with the majority reported in the last week.

On Thursday, two deaths from COVID were reported in the county, marking the first time since late May that more than one COVID-related death was reported in a single day.

Covid Act Now has classified Northampton County at a Very High Risk of an outbreak, because of the number of new cases it is now reporting daily.

The site also tracks and reports on other key COVID-19 metrics, including infection, positive test and vaccination rates.

As of Aug. 12 there were eight COVID-19 patients hospitalized in Northampton County intensive care units, according to current data, which is the highest number hospitalized in intensive care with the virus since early May. With 87 percent of the county’s 63 staffed adult ICU beds currently occupied–the majority by non-COVID patients–it suggests that “hospitals cannot absorb a wave of new COVID infections without substantial surge capacity,” Covid Act Now’s Hospitalizations chart states.