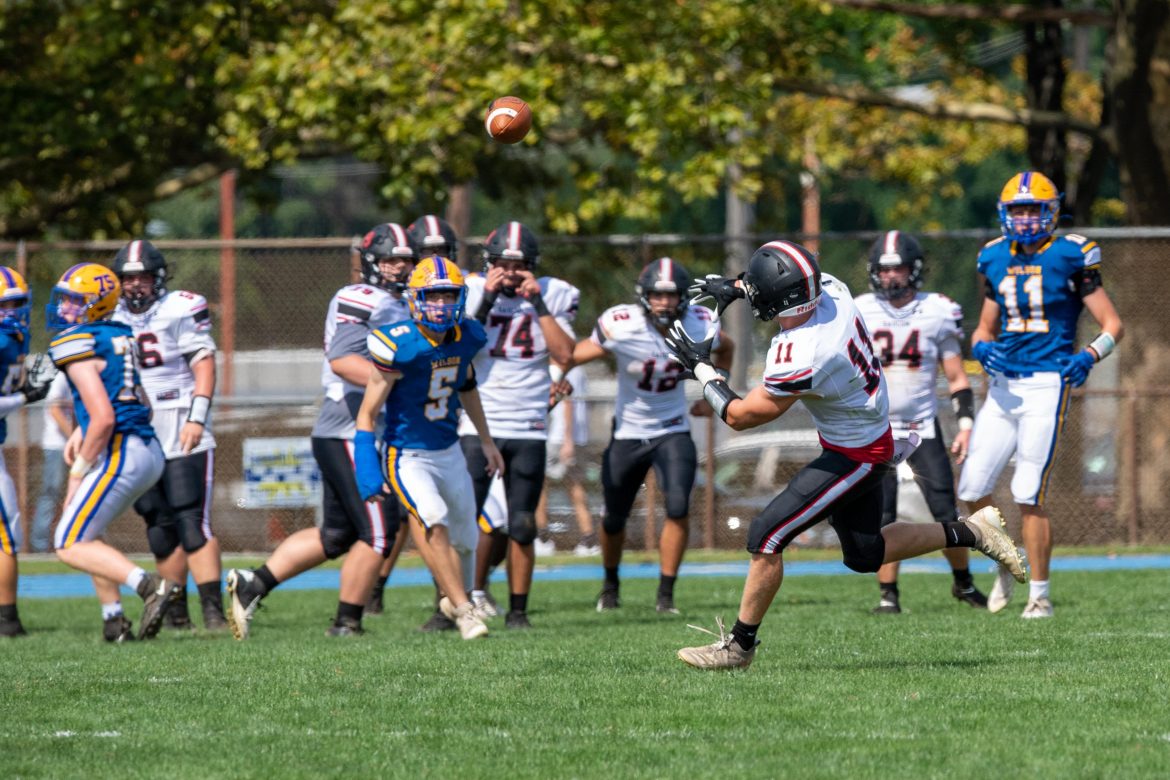 On a hot and steamy Saturday afternoon, the Saucon Valley Panthers loaded the bus and made the trip to take on the Warriors of Wilson in a Saturday afternoon matinee.  Wilson entered the sauna intent on improving to a 4-0 record while the Panthers were looking to get back to even at 2-2.

The contest started with Saucon Valley’s Nate Mondschein returned the opening kickoff to the Panther 32-yardline.  Saucon pounded the ball five straight times to the Warrior 31-yardline.  On the sixth play of the drive Panther freshman Jared Rohn was stripped of the ball after a 5-yard gain.  Wilson pounced on the loose ball and took over possession at their own 25-yardline.  The Warriors ultimately came up empty, however, and were forced to punt nine plays later from midfield.  It was the first time the Warrior punt team took the field this season.

Saucon regained possession at their own 24-yardline. On the third play of the new drive, Saucon senior quarterback Dante Mahaffey fired a laser to classmate Ty Csencsits on a post-pattern.  The throw and catch was good for a 70-yard Panther touchdown as Csencsits dove across the goal line for the score.  Jacob Christopher nailed the extra-point with 2:39 remaining in the first quarter as Saucon drew first blood and took a 7-0 lead. 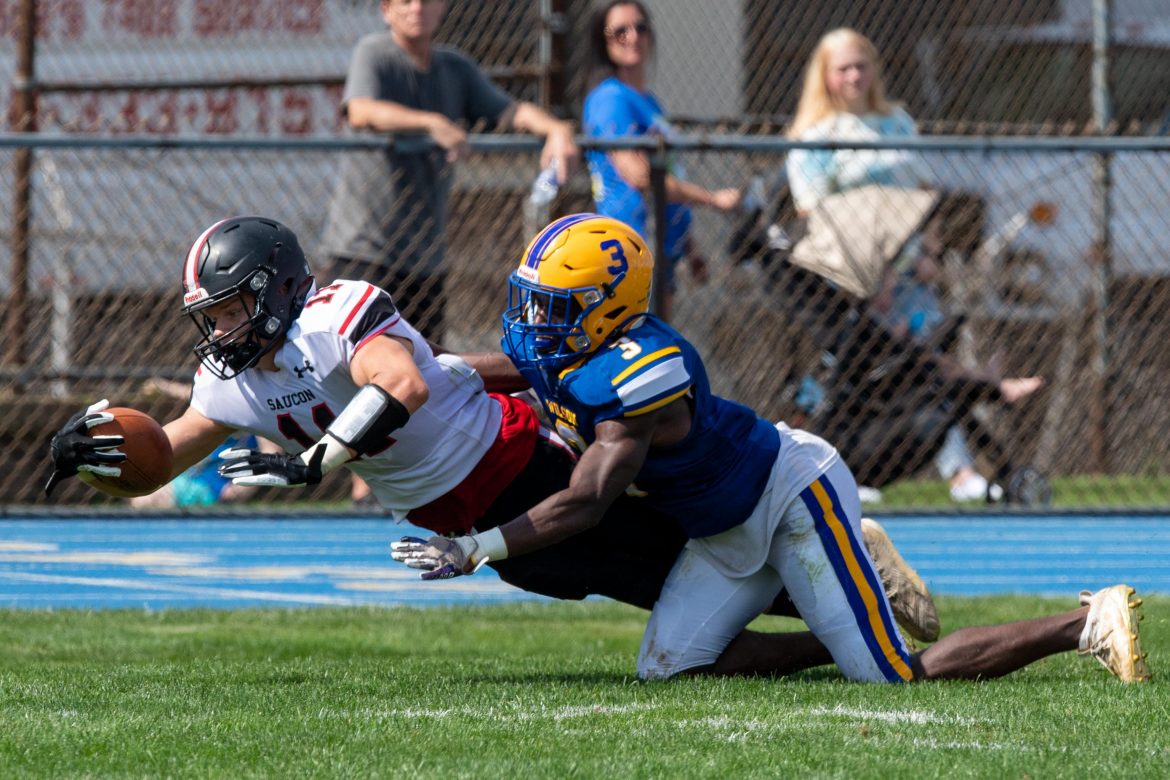 Saucon senior Ty Csencsits dives across the goalline to score the opening touchdown against the unbeaten Wilson Warriors.

The next Wilson possession led to  4th & 5 situation from the Panther 30-yardline.  The Panthers brought pressure and Jared Rohn hit home from his linebacker position with a sack of Wilson quarterback Cayden Stem.

Starting on their own 27-yardline with 8:28 left in the first half after Rohn’s sack, Saucon Valley methodically strung together twelve plays that concluded with 29-yard touchdown run by Dante Mahaffey around right end. The Panther score burned over six minutes off the game clock.  Christopher’s extra-point kick gave Saucon a 14-0 cushion with 2:02 left until halftime.

Any hopes of the Panthers pitching a first half shutout against the high-flying Warriors were dashed when Wilson hit pay-dirt with only six seconds remaining in the half.

Wilson’s 65-yard scoring drive was highlighted by a couple of 24-yard Cayden Stem completions to wide receiver Zack Gillen on a crosser and to Damion Simpson on a swing pass out of the backfield.  With :12 seconds left in the half, the Warriors set themselves up with a 1st & Goal from the 1-yardline.  Wilson scored their touchdown when Stem rolled right from the middle of the field and cooly threw back left to tight end Eric Shunk who was wide open in the backside corner of the end zone.  Wilson opted for, and was successful with, a two-point conversion.  At intermission, the Warriors closed in on the Panthers at 14-8. 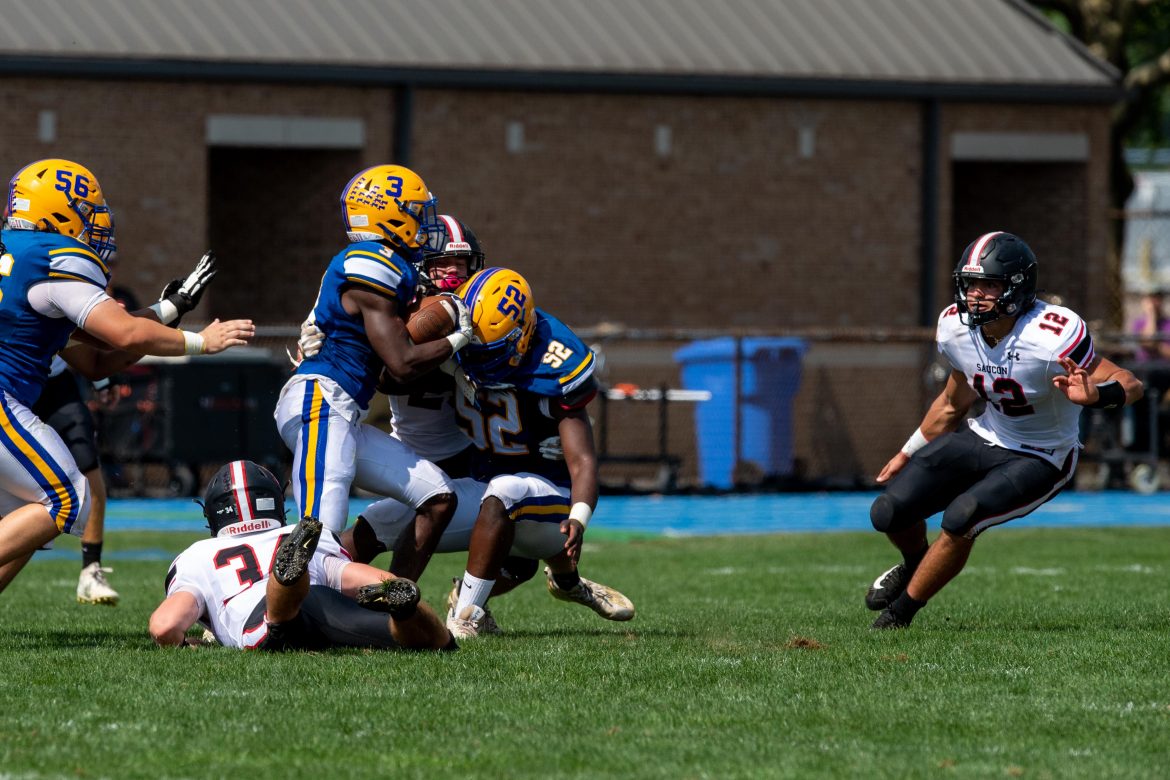 Wilson received the second half kickoff and did not waste any time getting back into the end zone. Warrior senior running back Damion Simpson found a crease off right tackle and sprinted 65-yards for a quick touchdown run.  Again, the Warrior efforts were rewarded with another successful two-point try.  With less than two minutes gone in the second half, the hosts took a 16-14 lead.

Saucon started their next drive at their own 35-yardline and punched the ball out to midfield.  However, the drive stalled halfway through the third quarter as the Panthers turned the ball over on downs just inside Warrior territory.

Saucon Valley took the ball back three minutes later when freshman defensive back Jack Robertson undercut a Cayden Stem pass intended for Zakai Hendricks.  Robertson’s pick brought the Panther offense back on to the field with a 1st & 10 from their own 7-yardline. 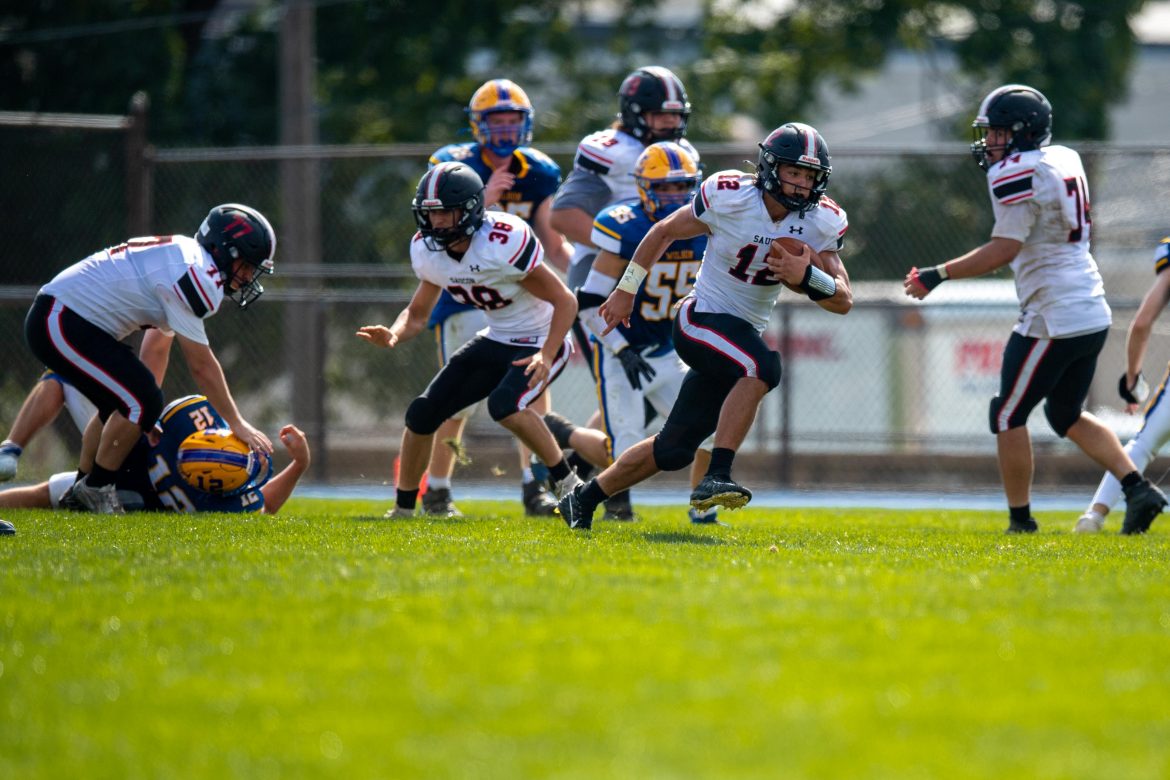 Saucon Valley quarterback Dante Mahaffey on his way to his second rushing touchdown of the day.

Panther quarterback Dante Mahaffey stepped up as the workhorse he is and led his teammates to six more points.  Mahaffey carried seven times for 81-yards during the run-heavy sequence which included a 40-yard gain on a well-executed quarterback draw.  The senior quarterback also had a hand in the two-point conversion when he completed a slant-route to junior wideout Alex Magnotta.  The Panthers fought back to take a 22-16 lead with nine minutes left in the game.

The Warriors showed tons of poise and calmly marched 13-plays deep into Panther territory.  The excitement heightened with Wilson facing a 4th & 3 from the 8-yardline.  Cayden Stem rose to the occasion and once again found Shunk in the endzone for the equalizer.  The Warriors made good on another two-point conversion when Stem found Zack Gillen in the back corner of the endzone.  With 2:45 remaining the Warriors reclaimed the lead, 24-22. 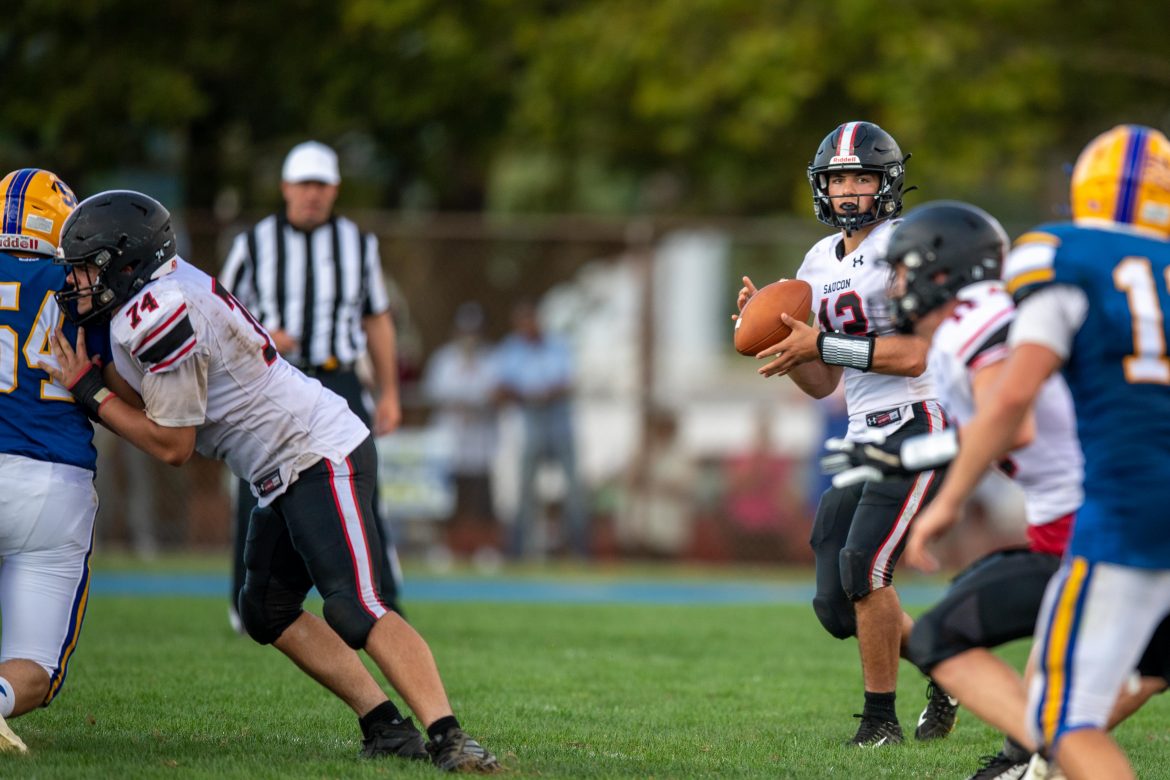 Panther quarterback Dante Mahaffey looking for an open receiver against the Wilson Warriors.

Saucon Valley fought back.  Starting at their own 26-yardline with 2:38 on the clock, the Panthers moved the ball to the Warrior 25-yardline. With :38 seconds on the clock and one timeout remaining the Panthers were on the doorstep of victory.  However, Saucon could not connect on their next three pass attempts.  The final pass was a game-ending interception by Wilson’s Zack Gillen.

The Saucon Valley Panthers  fought hard for a full forty eight minutes, but ended up on the wrong side of a great 24-22 high school football game. 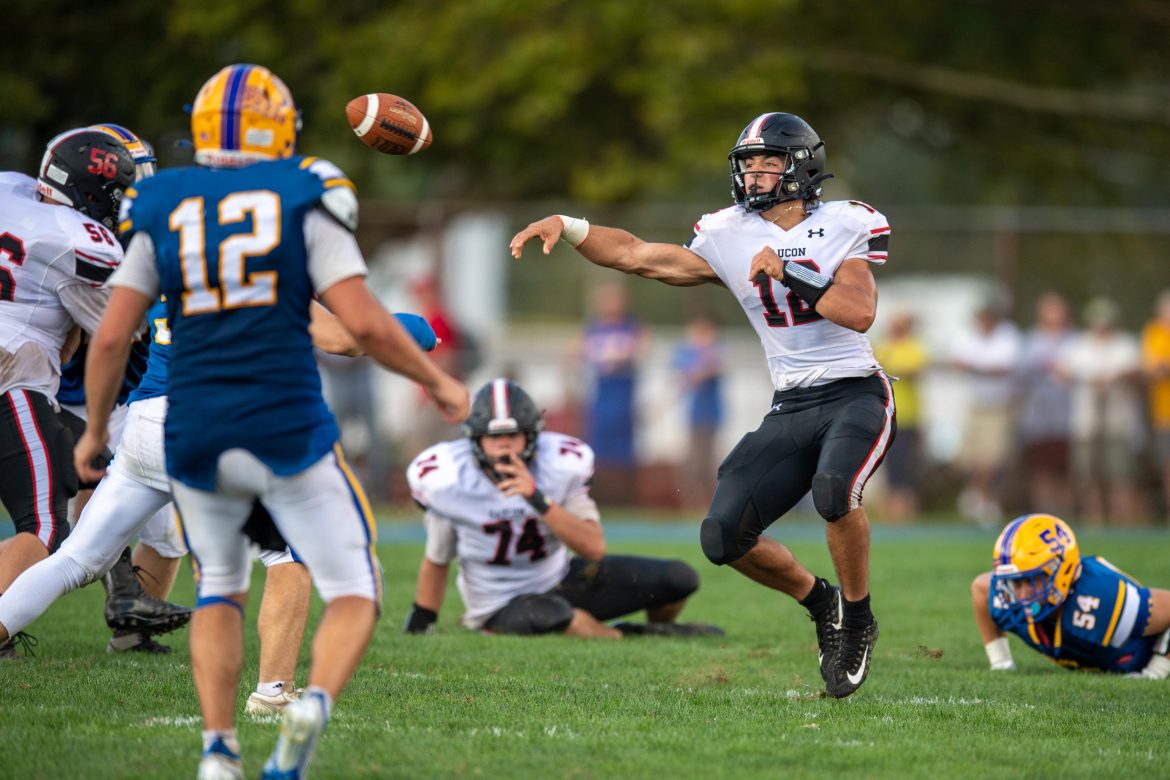 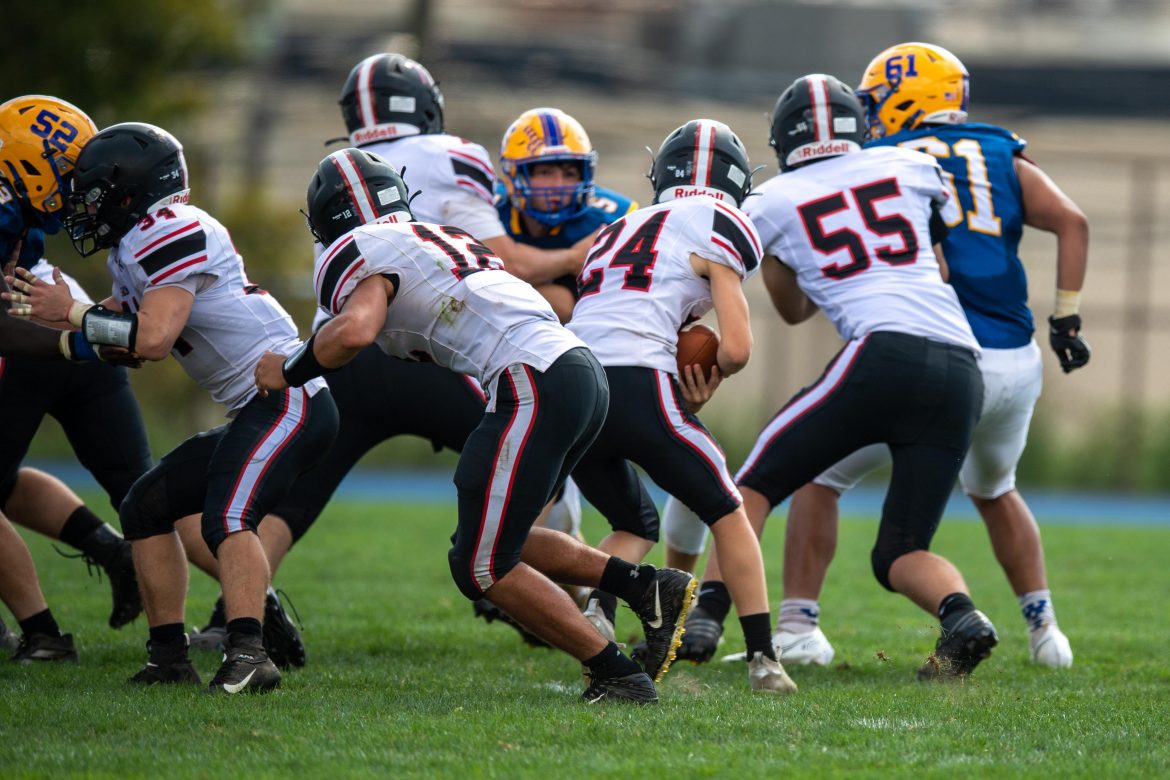 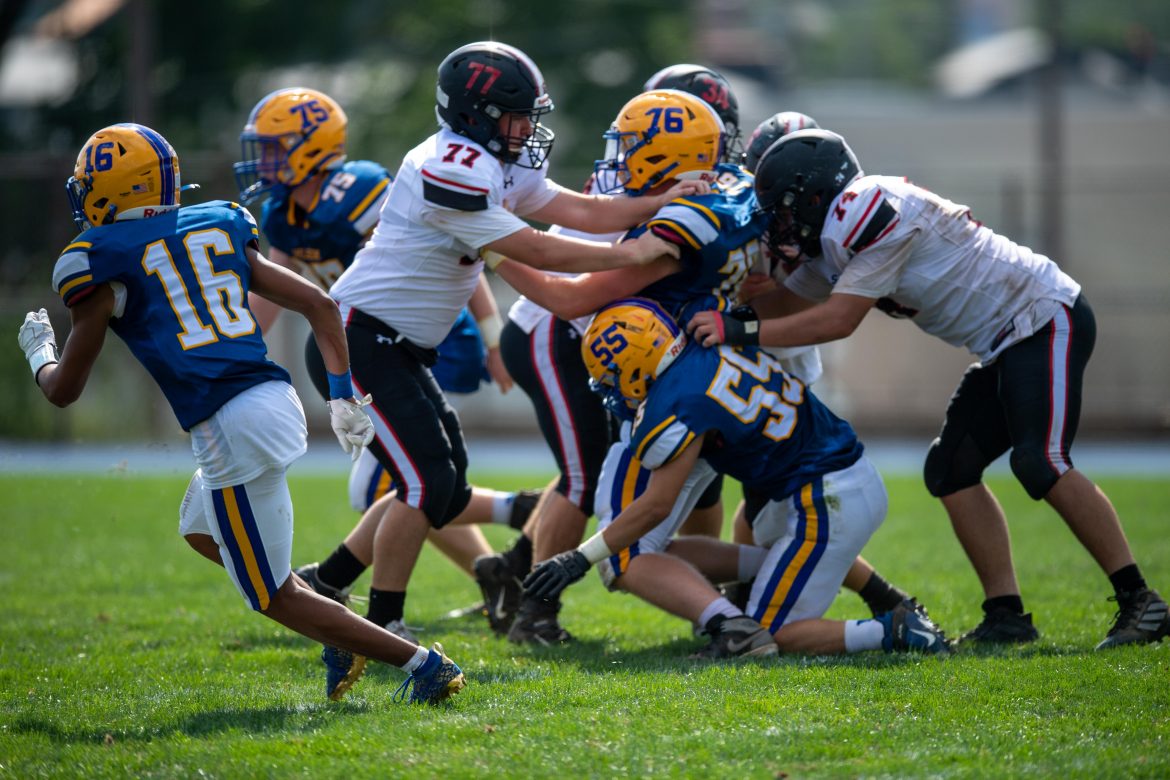 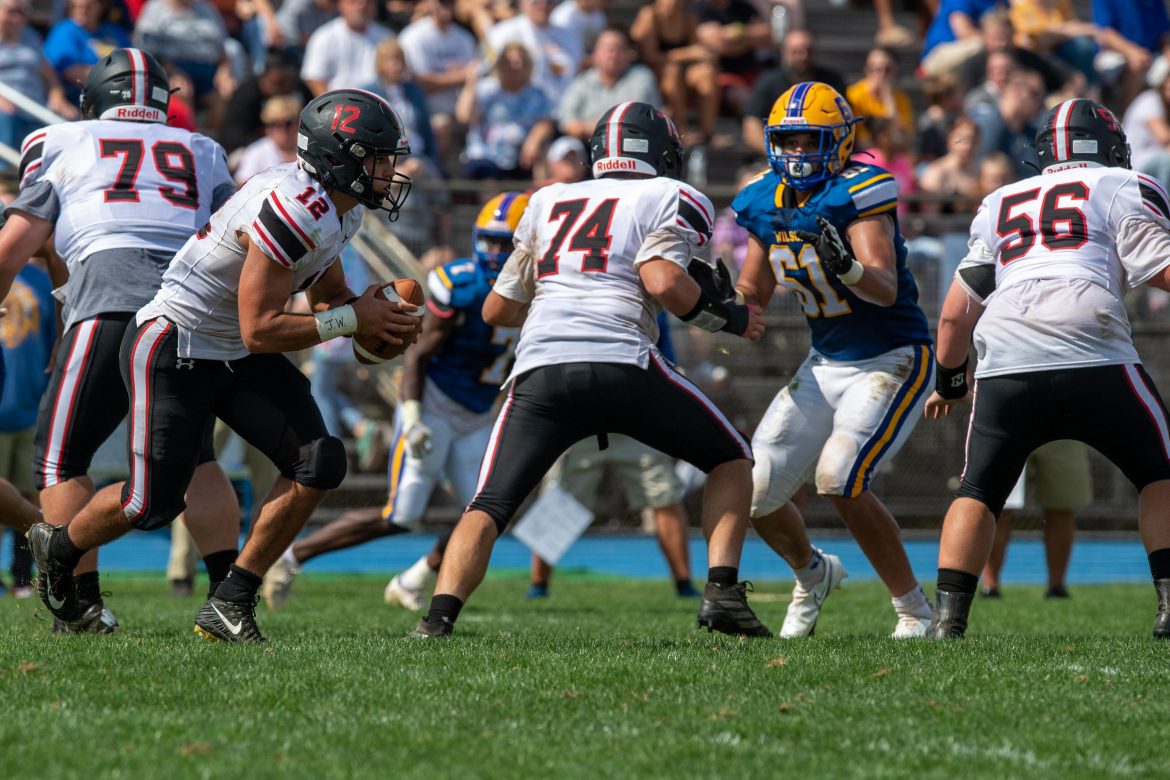 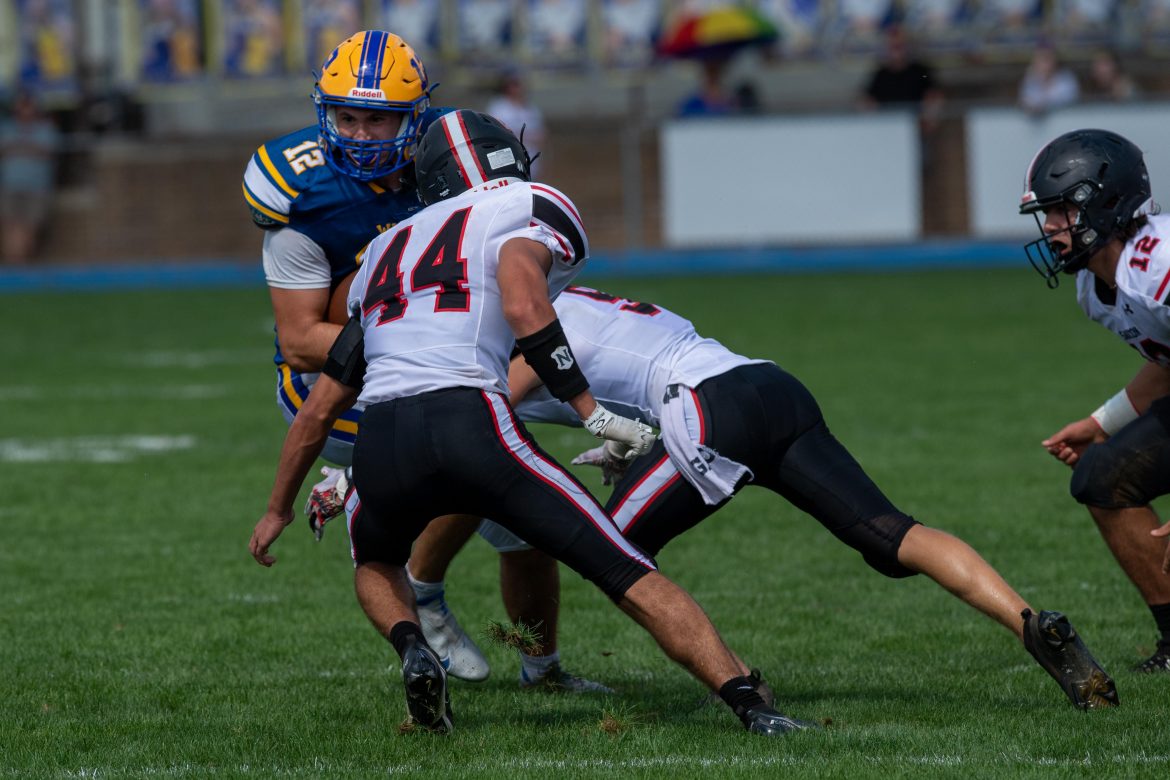 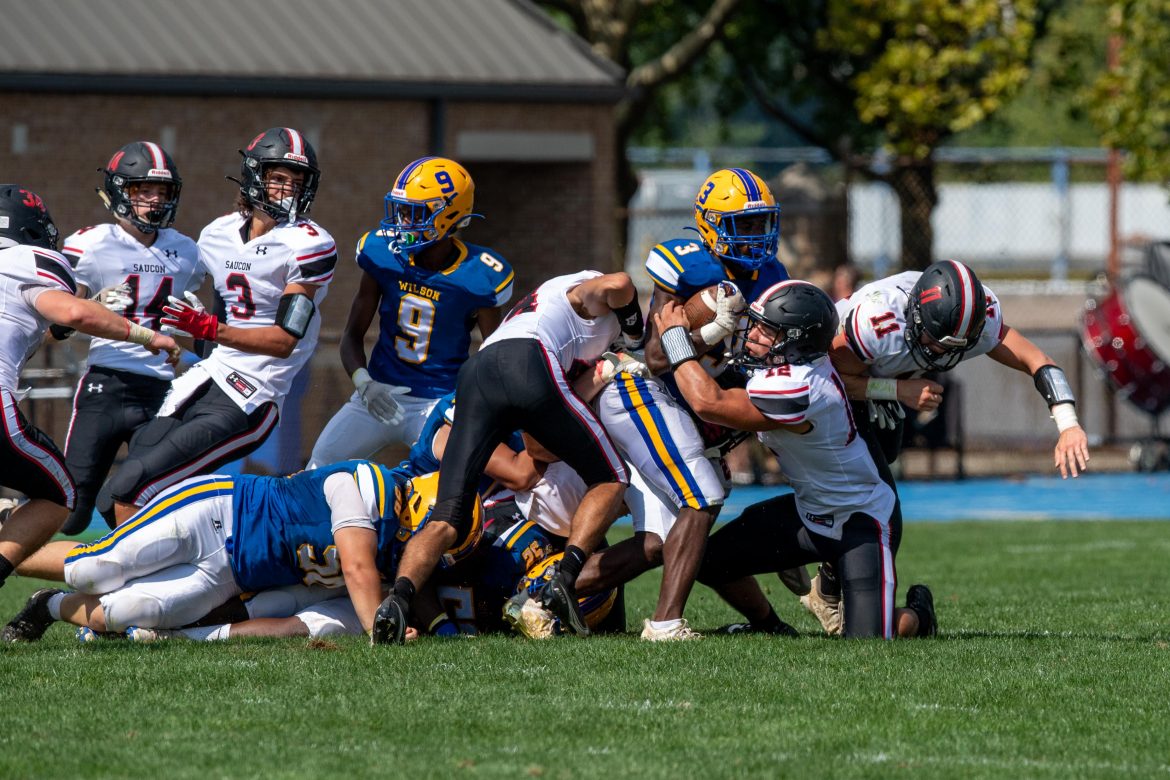 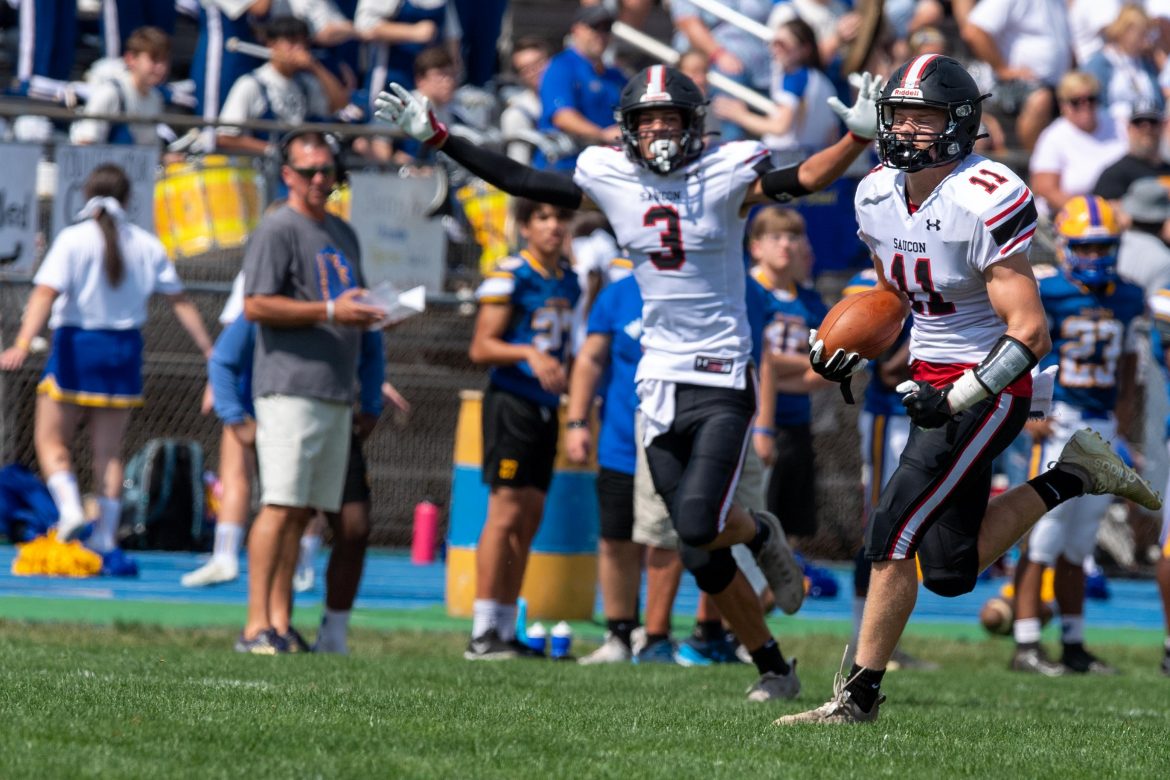 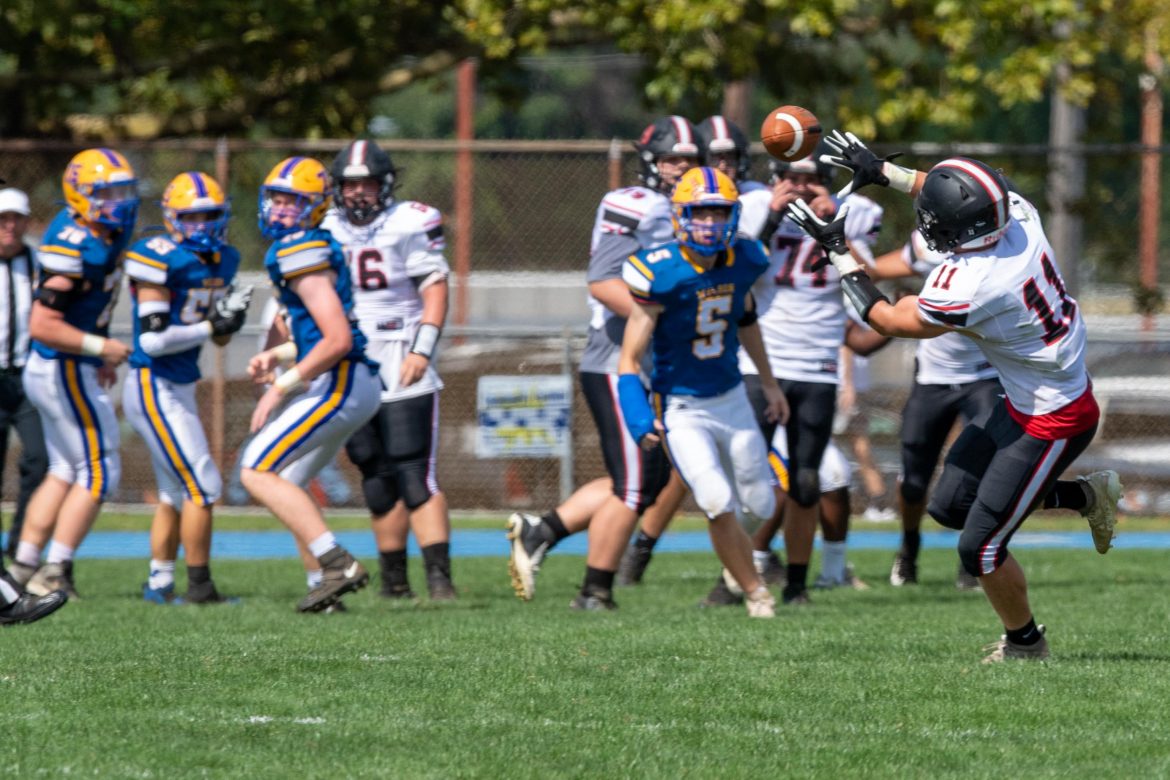 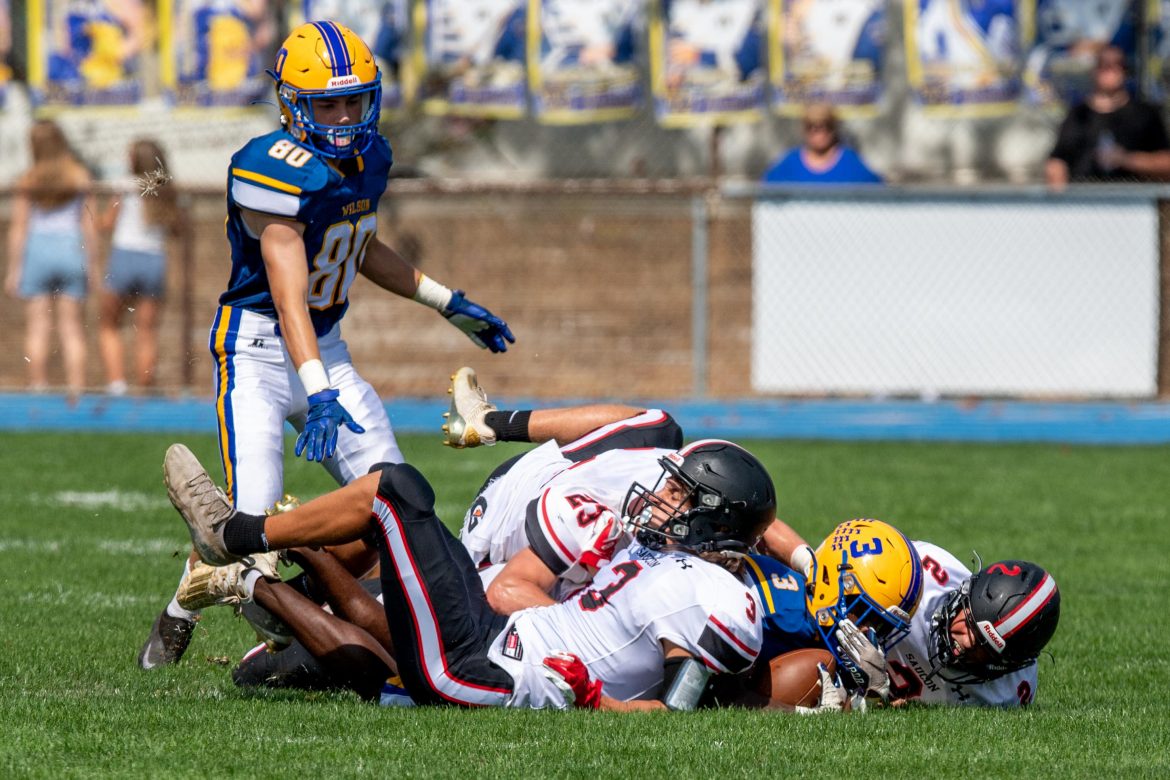 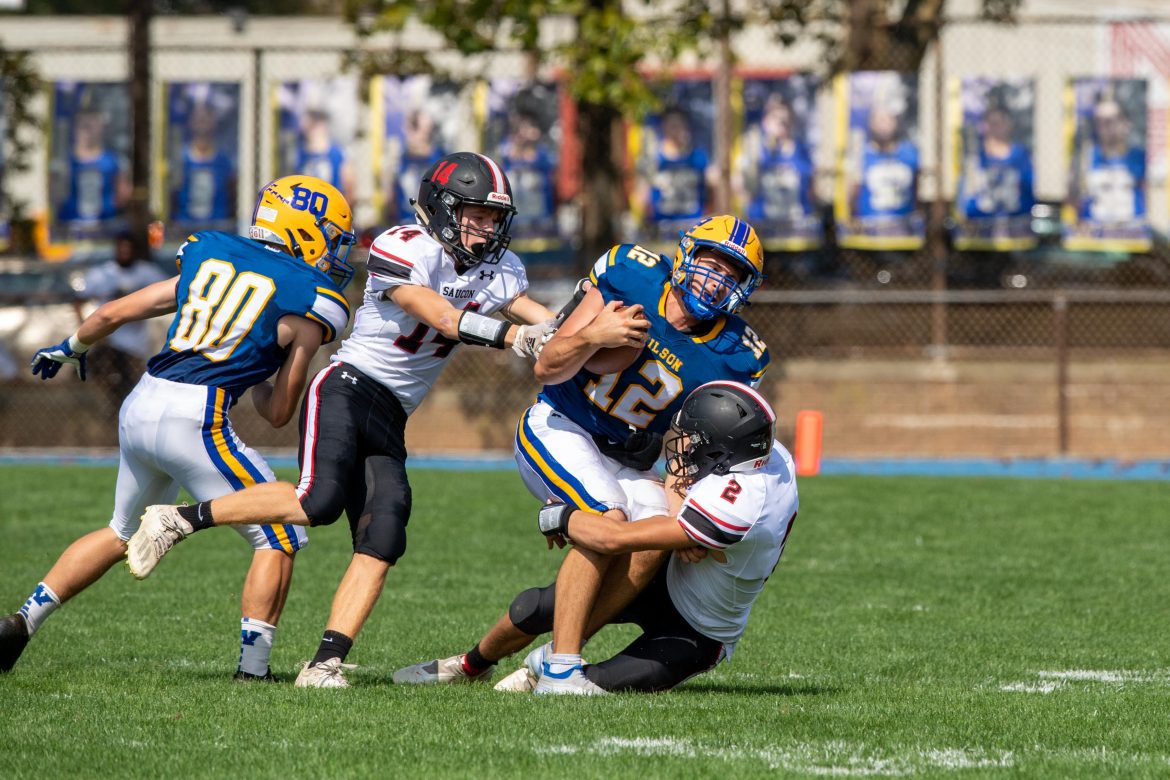 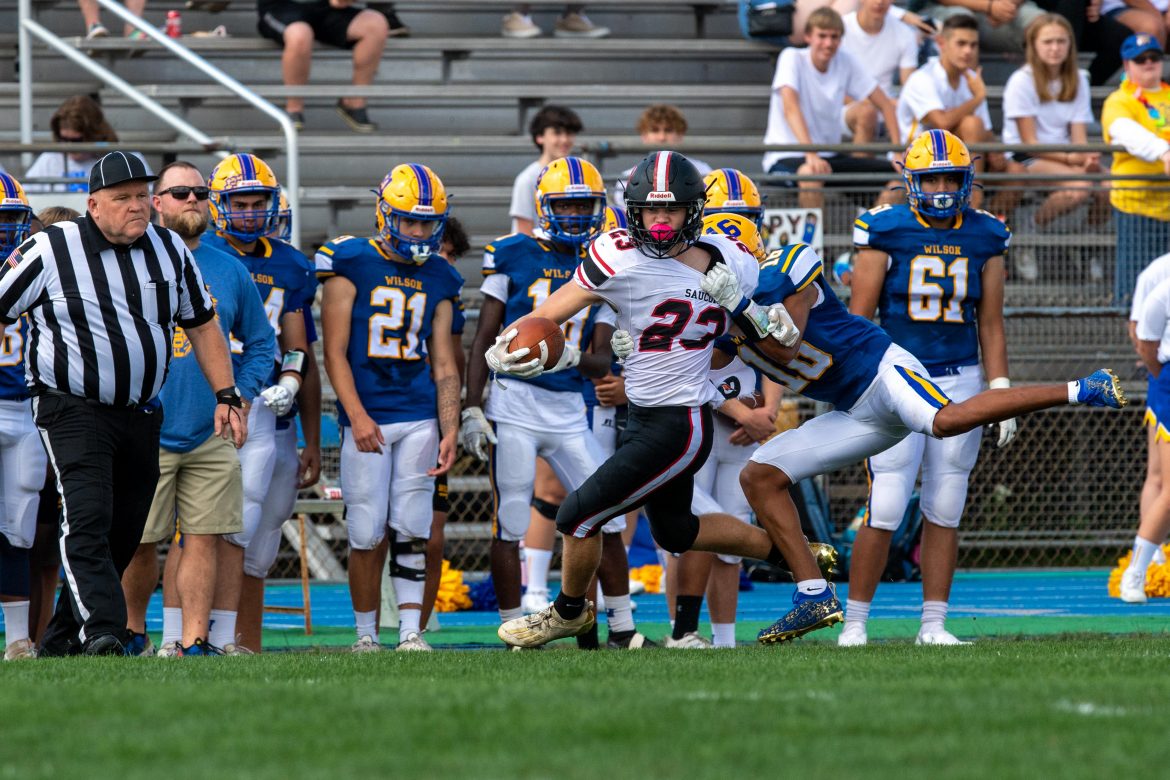 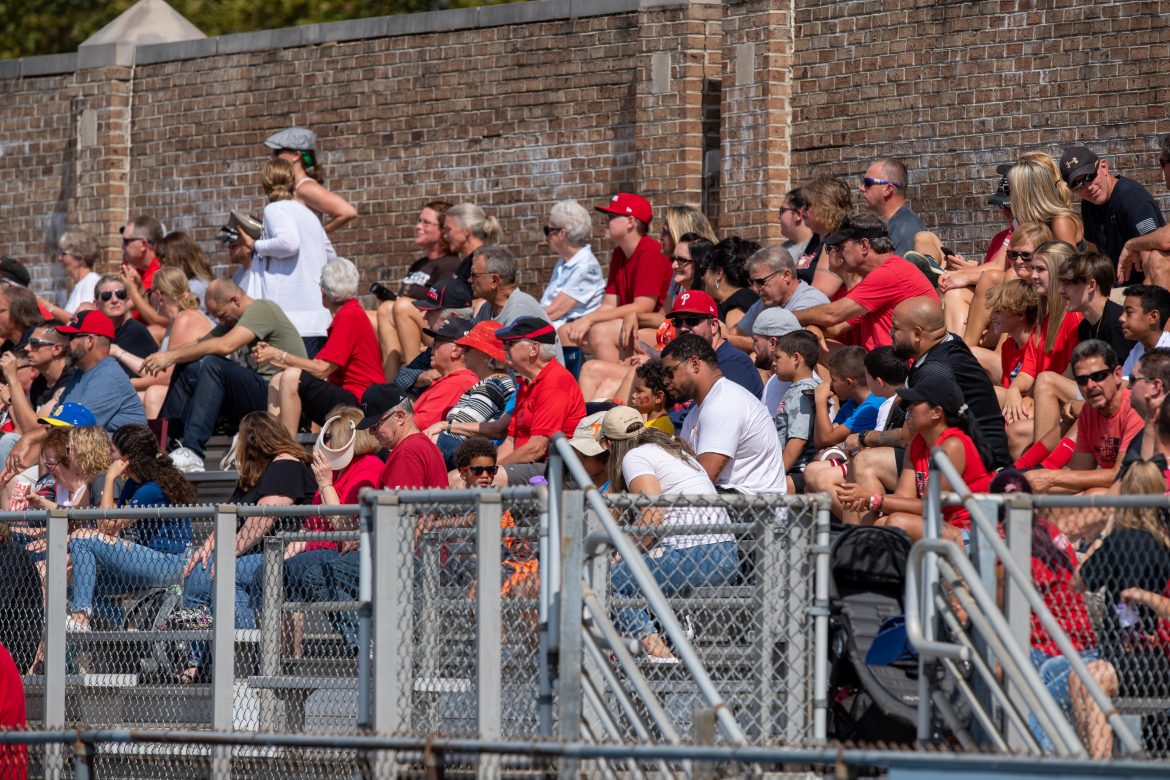 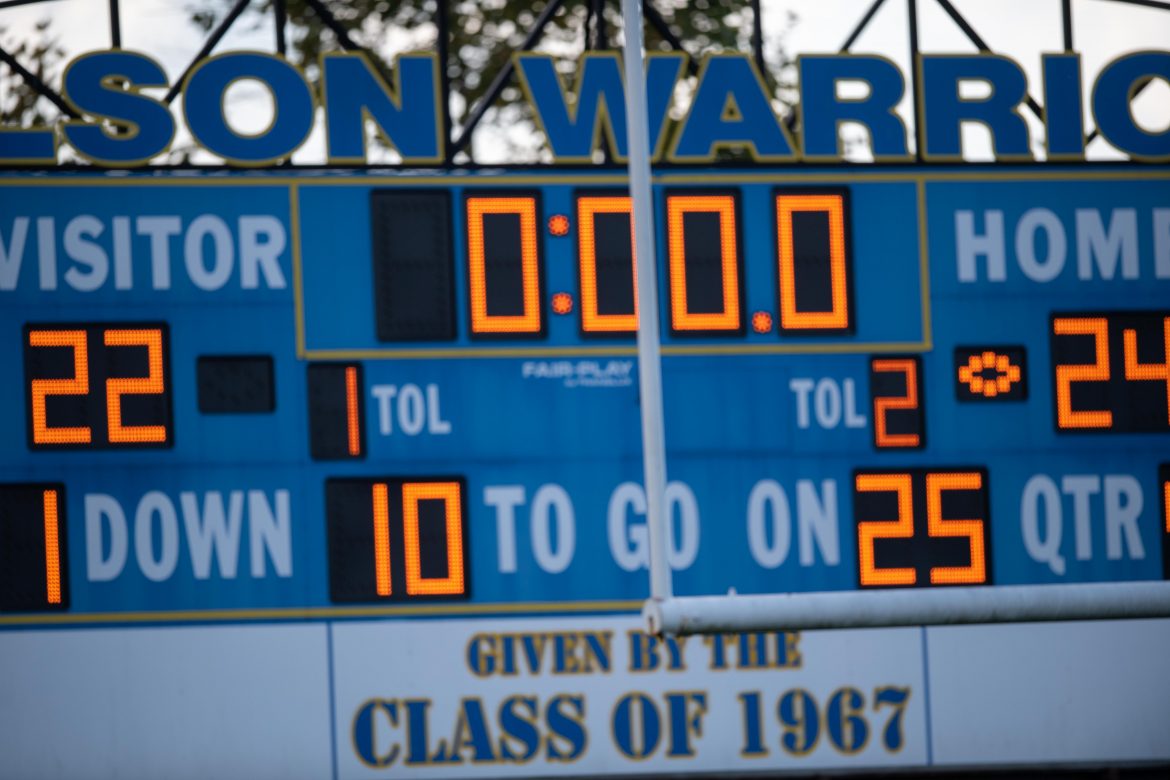