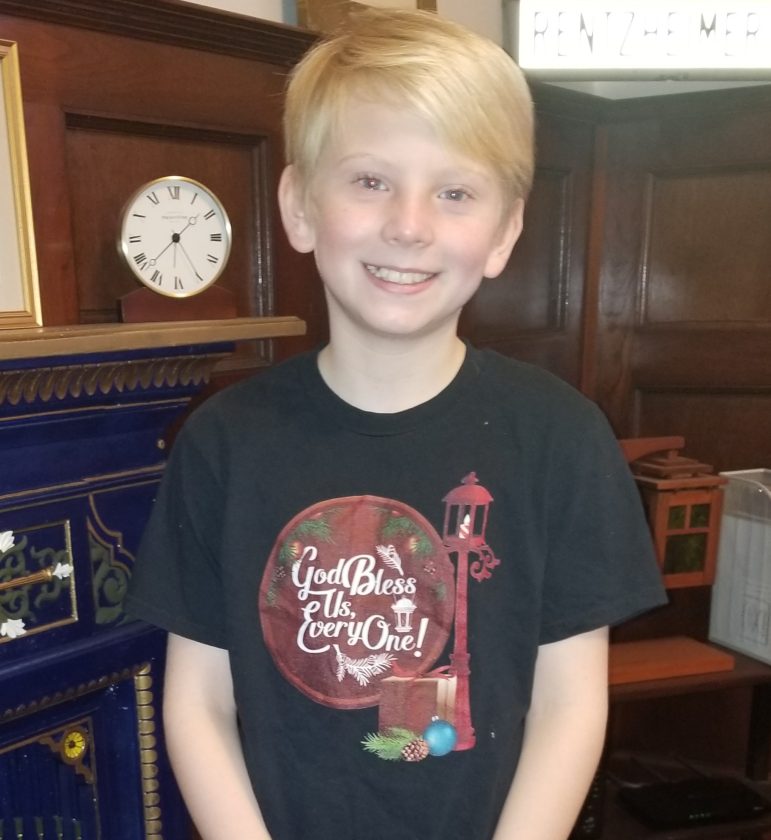 Nine-year-old Liam Griffith of Saucon Valley was bitten by the acting bug at a young age. One of his first appearances was as young Simba in a January 2020 production of “The Lion King” at the former St. Theresa School in Hellertown. When the school closed last year, Liam’s parents enrolled him at Our Lady of Perpetual Help School in Bethlehem Township. Liam’s three brothers and his classmates are supportive of his acting, although his friends occasionally tease him about it, he said.

There are few sentences in English as iconic as the one uttered by Tiny Tim at the conclusion of Charles Dickens’ masterful study in human behavior, “A Christmas Carol.”

So the thought of having to pronounce that line nightly in front of a large theater audience could understandably be intimidating for most kids.

But 9-year-old Liam Griffith of Saucon Valley isn’t most kids.

He demonstrated that by wearing a “God Bless Us, Every One!” t-shirt to a recent interview at Saucon Source’s offices in Hellertown, where he discussed preparing to play Tiny Tim in Civic Theatre of Allentown’s holiday production of the Dickens classic, which opens Friday, Dec. 3.

This year marks the production’s 30th anniversary and the first time it has been performed since 2019.

Liam’s mom, Erin, explained that Covid canceled the show last year, as it did with most other holiday theatrical performances in the area.

This year, so the show can go on, caution is being exercised by the entire production staff.

All of the actors must wear masks at all times during rehearsals unless they’re fully vaccinated, in which case they can remove them while performing on stage.

“I was really pleased with how many precautions they’re taking,” Erin said. 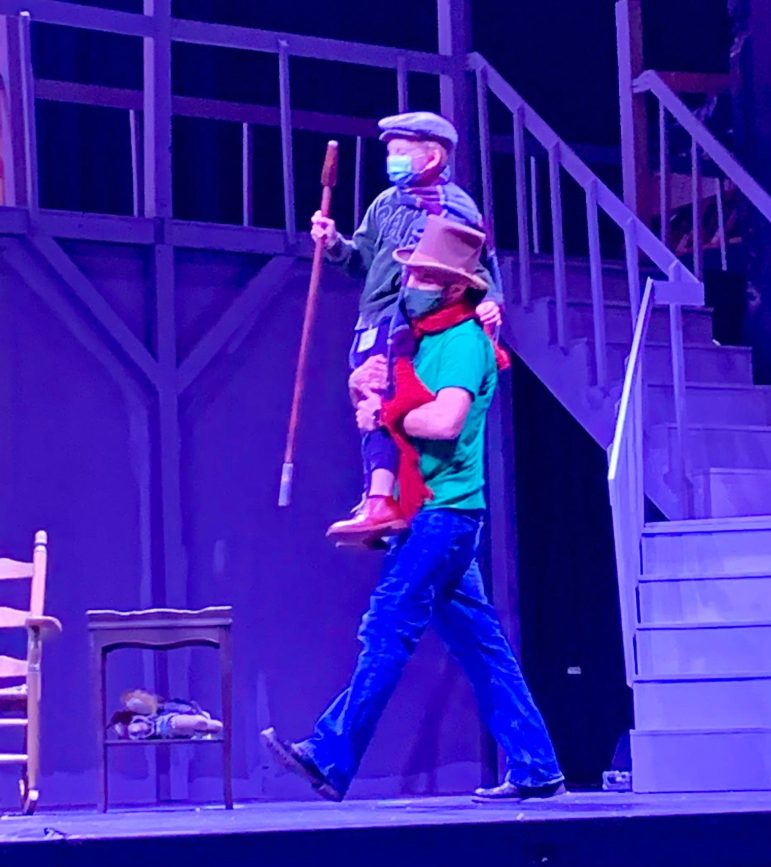 Liam wasn’t eligible to receive the Covid vaccine until earlier this month, after it was approved for use in 5 to 11-year-olds, and he received his first dose the first day it was available.

He’ll soon receive his second dose and everyone is hoping he’ll be able to drop the mask by being fully vaccinated when the curtains go up in December, Erin explained.

Until then, ensuring that Liam remains healthy remains a high priority, at rehearsals and while he attends classes at Our Lady of Perpetual Help School in Bethlehem Township.

The budding thespian got his start at a different local Catholic school; the former St. Theresa School in Hellertown, which closed in June 2020.

Just before that–and before Covid disrupted both education and the dramatic arts–he was cast in one of his first acting roles in the school’s production of “The Lion King.”

Asked what he likes most about acting, Liam said it’s the chance to see people’s reactions to his performances on stage.

“I like seeing people’s faces if they’re looking up at me,” he said in a soft voice.

He said he avoids bouts of stage fright by imagining that audience members are shrimp.

While his three brothers–including his twin–are mainly preoccupied with sports, Liam has always gravitated toward the arts, his mom said.

Two of his three favorite subjects at OLPH School are art and music.

When Erin learned about an open call for actors for Civic’s production of “A Christmas Carol” in October, she said she asked him if he wanted to audition, and he readily agreed.

Then, when the call came telling them he’d gotten the part of Tiny Tim, he jumped up and down with excitement, she recalled.

“I feel like it’s an honor for him, that he got such an important part,” she said. 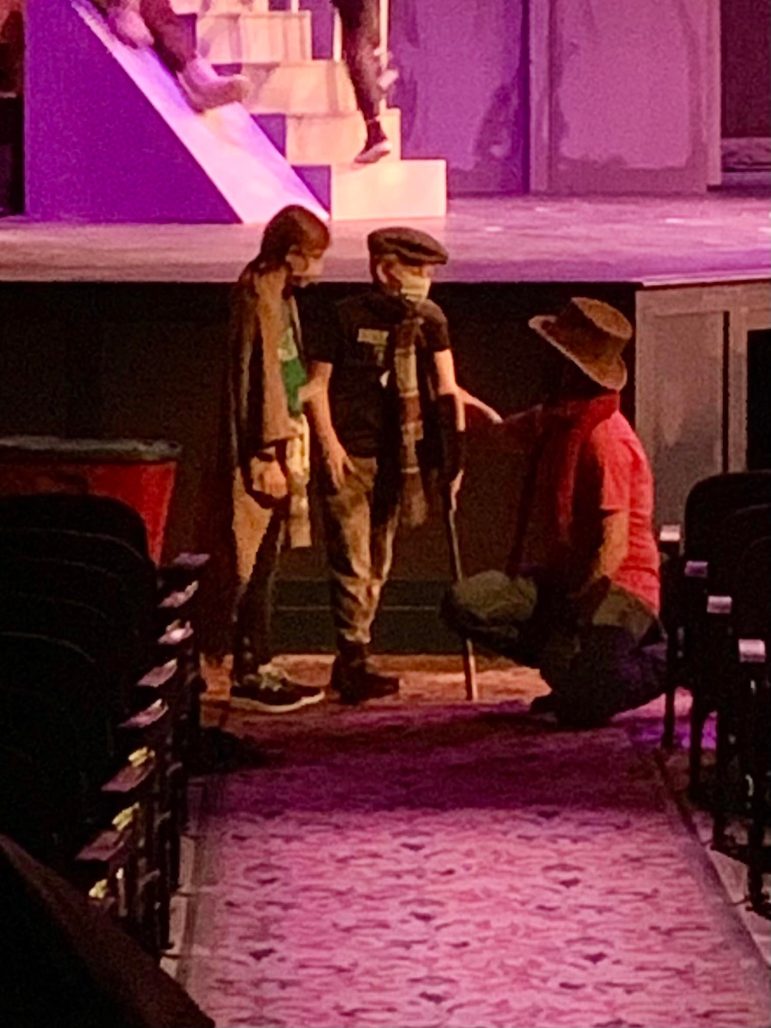 Rehearsing for “A Christmas Carol” requires a major time commitment, with evening rehearsals often lasting until 9 p.m. Although he’s just nine, Liam’s professionalism has won him the respect of his fellow actors, him mom, Erin, said.

Honors aside, the time commitment for playing the part is significant, since evening rehearsals typically last hours. However, the repetition of rehearsing his part until 9 p.m. all this month is what has helped him learn his lines, Liam said.

To learn to speak with a British accent he’s watched a number of YouTube videos, and learning to walk with the crutch Tiny Tim uses has also required quite a bit of practice.

His dedication to his craft is one of the reasons the other actors treat Liam like the professional he is, his mom said. The respect he’s earned is also fitting, since Liam said his goal in life is to win either an Oscar or a Tony award.

Although his hobbies are very 21st century and include watching English YouTube gamer Slogoman, along with playing Little League baseball, Liam said his favorite actors are two you might not expect a nine-year-old to even know about: Elvis Presley and Grace Kelly.

He is also aware that a Lehigh Valley native who once played Tiny Tim is now a rising Hollywood star. Seventeen-year-old Oakes Fegley, who has starred in films like “The Goldfinch” (2019), was Liam’s age when he played the part at Civic Theatre of Allentown.

Tickets for “A Christmas Carol” at Civic Theatre of Allentown may be purchased via the theater’s website, which also lists showtimes and outlines Covid safety protocols.

All patrons over the age of 12 are required to show proof of vaccination upon entry at the theater, or in lieu of that must present the result of a negative COVID-19 test taken within 72 hours of the performance.

A total of 12 performances of “A Christmas Carol” are scheduled between Dec. 3 and Dec. 18. 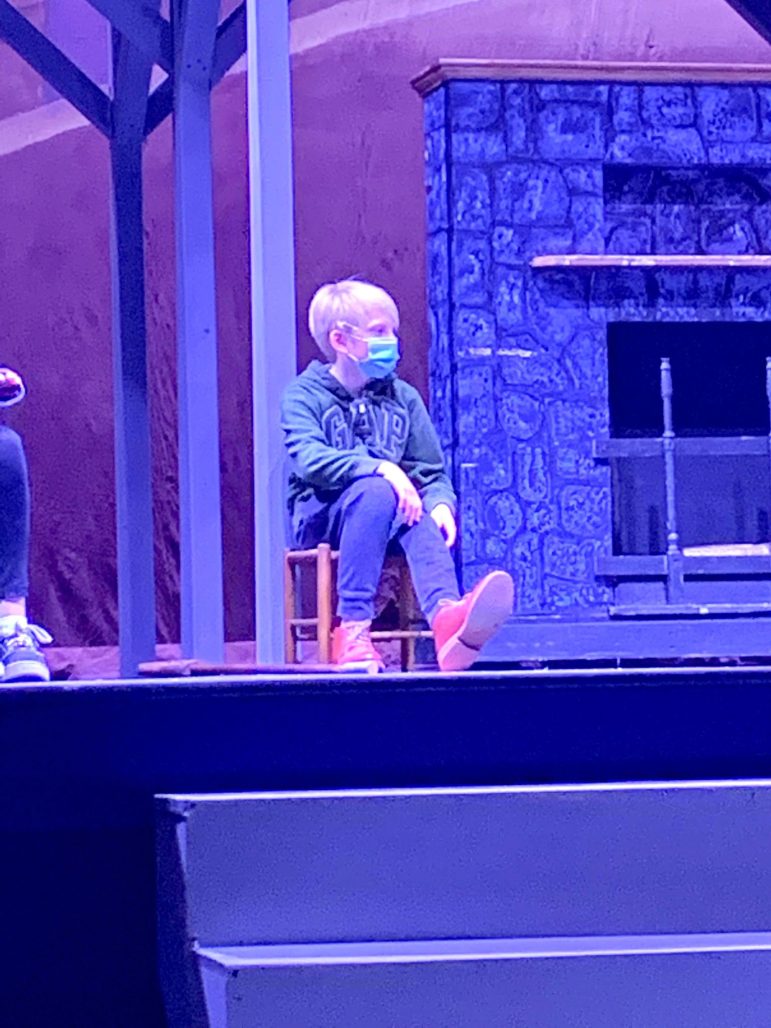 Nine-year-old Liam Griffith is proud to be playing the role of Tiny Tim and following in the footsteps of rising Hollywood star Oakes Fegley in Civic Theatre of Allentown’s 30th anniversary production of “A Christmas Carol,” which opens Dec. 3. Tickets are now on sale for 12 performances that will take place between Dec. 3 and Dec. 18.