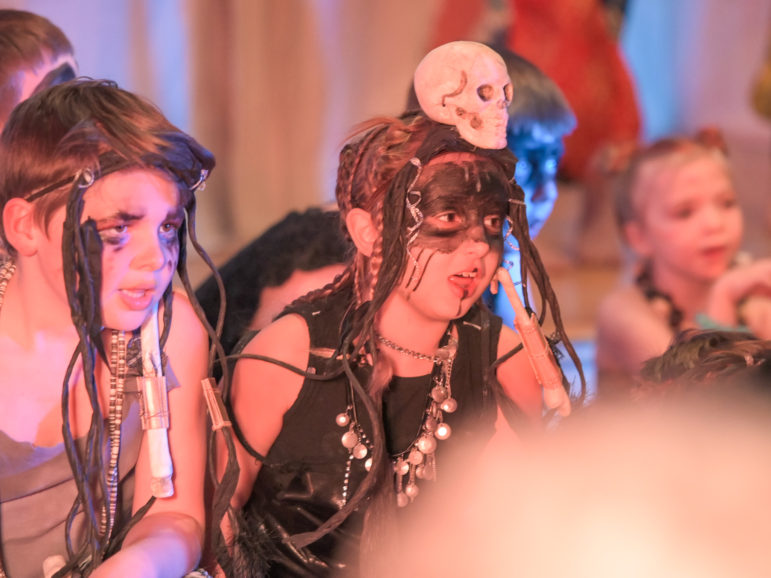 Above, St. Theresa School students perform in a production of “The Lion King Jr.” on Jan. 19. The musical’s performance was the culmination of a week-long, school-wide theater arts immersion program led by Sing for America of Bethlehem. Students and parents alike were delighted with the experience of producing the musical as well as the finished product.

Students who attend kindergarten through eighth grade at St. Theresa School in Hellertown leaped onto the stage this month in a production of “The Lion King Jr.” Their performance was the culmination of a week-long theater immersion program with Sing for America which was educational, fun and a “roaring success,” school officials said.

Comprised of the five Gilbert siblings, Sing for America is a Bethlehem-based, patriotically-inspired performance and production group that was contracted by the school to run the six-day custom theatrical immersion experience, which included intensive after-school programming for most students.

Students attended their regular classes until 2:30 p.m. and then switched over to the after-school theater program, which “was all linked to their curriculum, including their religion curriculum,” according to St. Theresa School principal Deacon Peter Schutzler.

Students not only acted in the musical, but also created the sets for it, applied makeup, learned about costuming and lighting, sang, danced and did everything else required when producing a live stage show.

The end result was a professional-level, “one night only” performance that amazed many of the attendees who saw it Sunday, Jan. 19, a day after it was postponed due to wintry weather conditions. 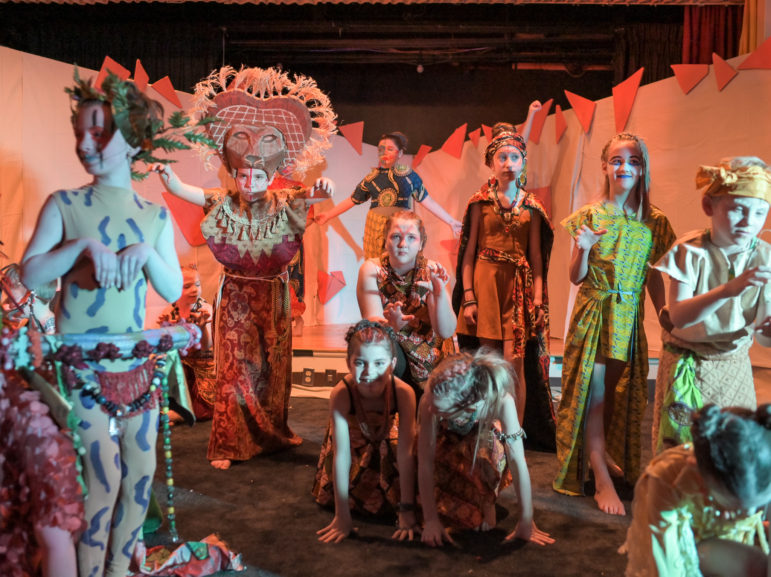 Students at St. Theresa School in Hellertown recently participated in a theater arts immersion program led by Sing for America. The program taught students in kindergarten through 8th grade about what it takes to produce and perform a musical live on stage. The end result was a well-reviewed performance of “The Lion King Jr.” at the school Jan. 19.

St. Theresa School director of advancement Hilary Jebitsch said the show itself was “phenomenal,” but more importantly was how students’ confidence in themselves as performers grew throughout the week as they became immersed in it.

For many kids it was the first time they had ever participated in a theatrical production, which made the positive outcome all the more special, Jebitsch and Schutzler agreed.

The performance of The Lion King Jr. was held in the school’s Friendship Hall, which nearly burst at the seems with more than 200 parents, family members and friends in attendance to see it, they said, noting that Heintzelman Funeral Home in Hellertown was even tapped to lend folding chairs due to the fact that additional seating was needed.

And if you missed the epic performance, you need not fret. There will likely be more great musicals produced and performed at St. Theresa School in the future.

“The parents and the kids overwhelmingly want to do an experience like this again,” Jebitsch said.

“It’s not just about putting on a really cool show,” added Schutzler. “There’s a broader context to it.”

“If they’re creative, it helps them in the classroom,” agreed Jebitsch, who noted that the arts and theater program at St. Theresa School is something that helps to set it apart.

In fact, next up for students is their Spring Art Show, which the school is already gearing up for.

St. Theresa School is located at 300 Leonard Avenue in Hellertown. The school is currently enrolling students for next year and has transfer grants available, Jebitsch said.

To schedule a tour or for more information, please call 610-838-8161 and visit the school’s website. 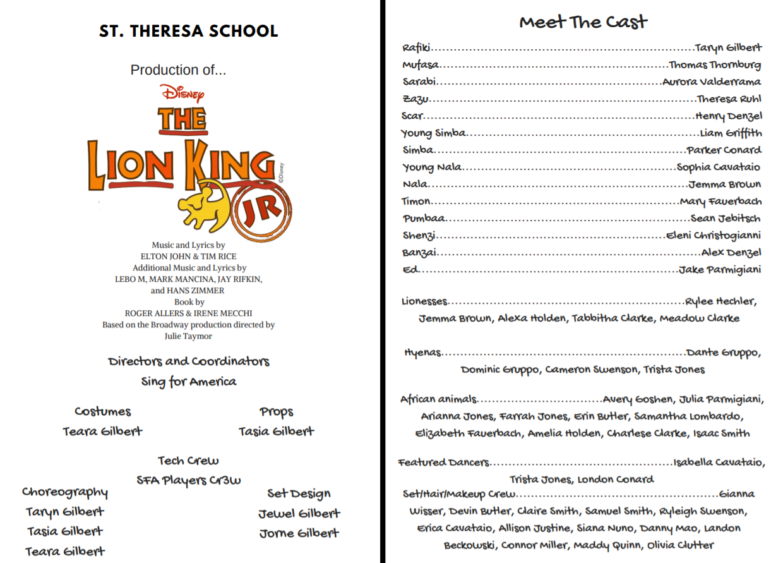 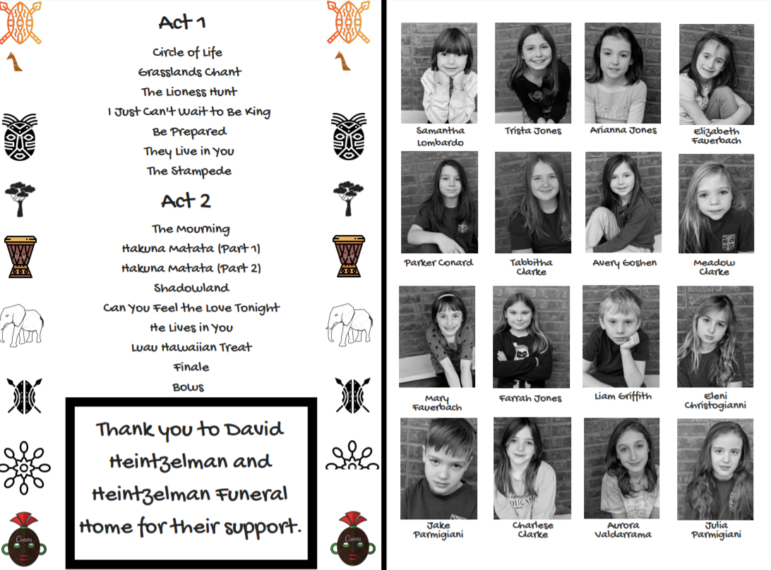 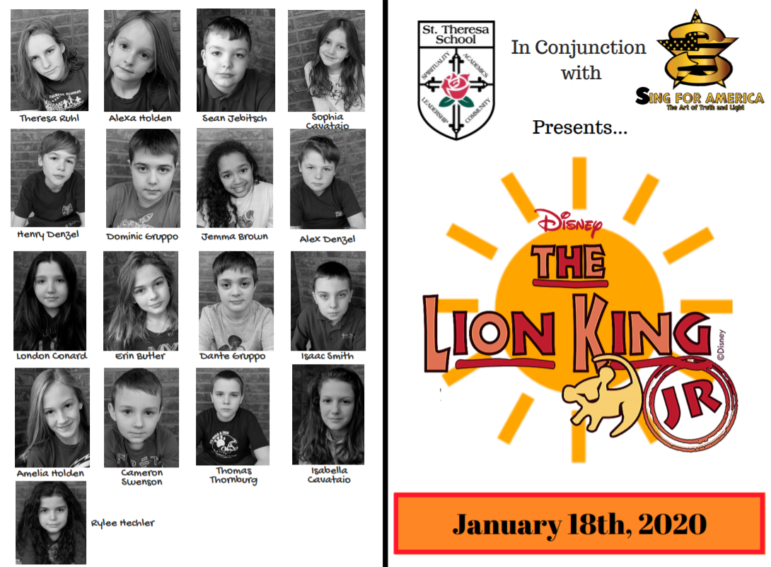 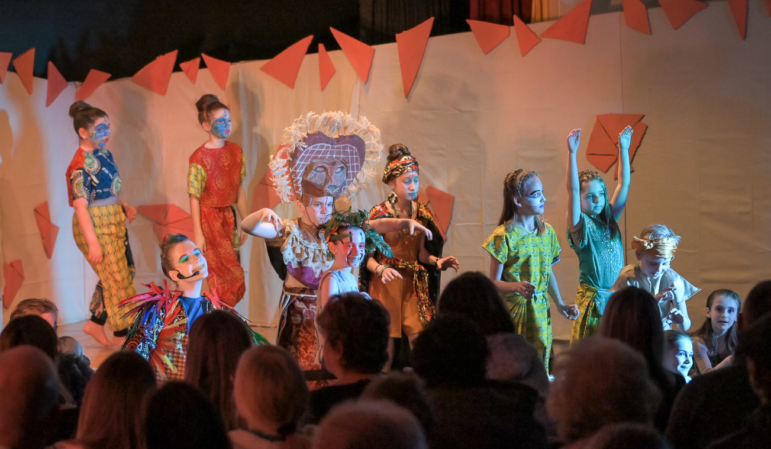 Friendship Hall at St. Theresa School was packed by more than 200 people who came to see “The Lion King Jr.” performed and produced by an all-student cast and crew Jan. 19. The performance was delayed a day due to wintry weather on Jan. 18. 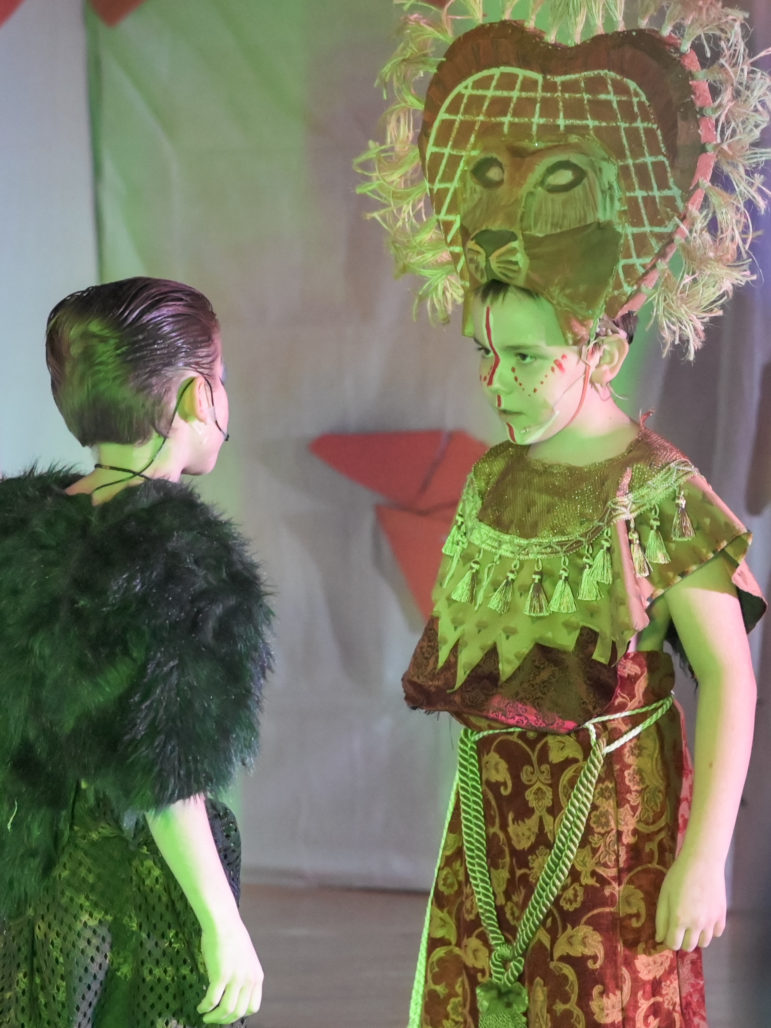 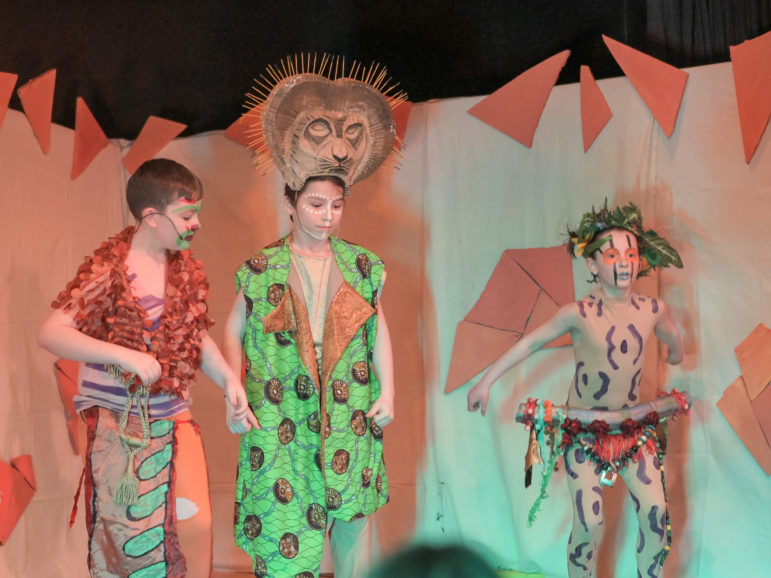 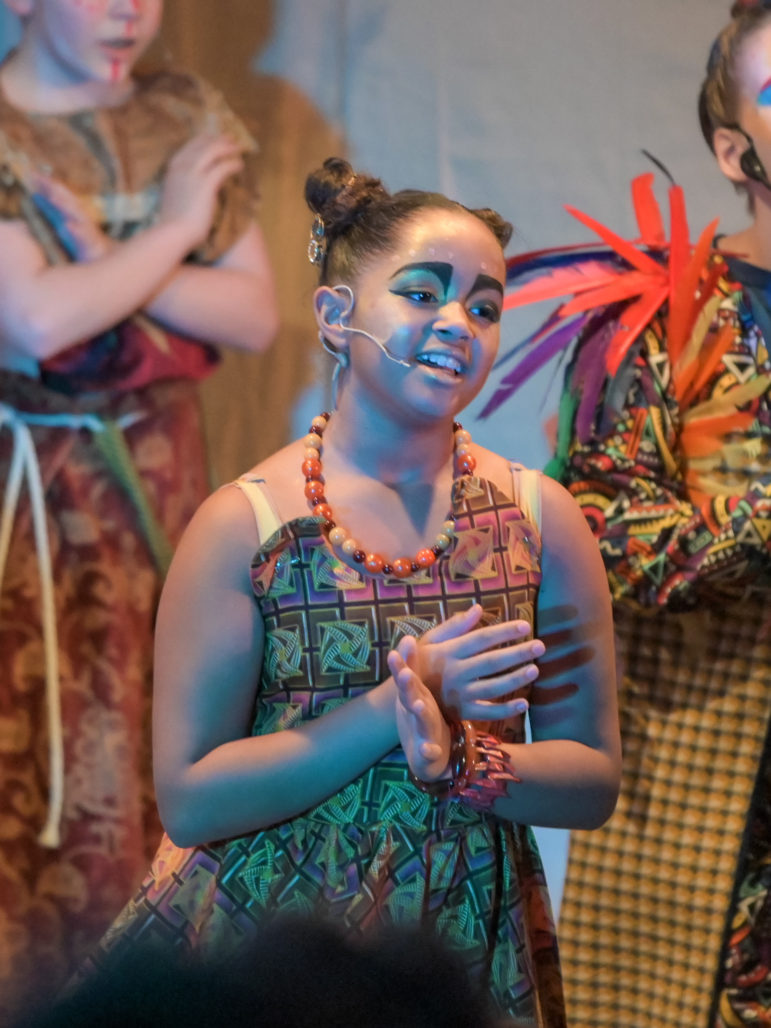 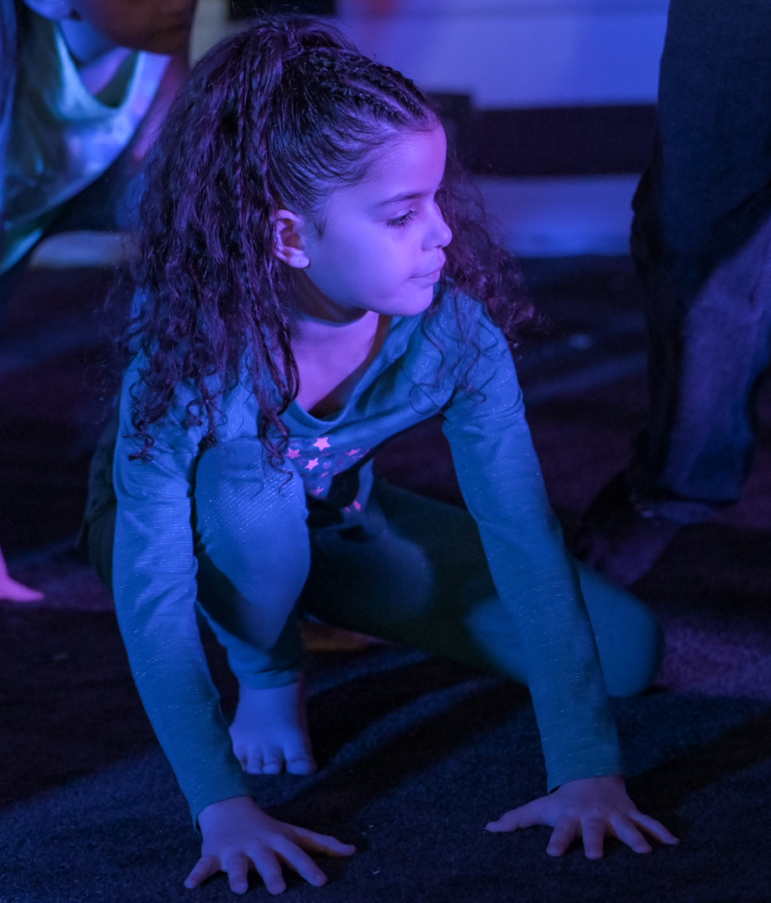