A century ago, in a special full-page, illustrated story published on Nov. 5, 1922, The Allentown Morning Call proclaimed Coopersburg “the Town of Possibilities.” But 100 years earlier it wasn’t known as Coopersburg and was little more than “a country village.”

Coopersburg was originally known as Fryburg, and was named after an early 19th century hotel proprietor named Joseph Fry Jr., who the article notes was also a distillery owner.

It wasn’t until 1832 that the village of Fryburg was rechristened “Coopersburg” in honor of Peter Cooper; a descendant of early settler Daniel Cooper, who arrived in the area around the time the American Revolution began.

The 1922 article presents this period in Coopersburg’s history thusly (see full story below):

About the year 1775 Daniel Cooper, born at Dillenberg near Amsterdam in 1752 settled here, and in 1800 purchased a tract of land from the Bachmans and erected the house now occupied by Dr. J. A. Laros. Soon after this he purchased the hotel, together with another tract. He served several times as justice of the peace, died in 1822 and was buried at the old meeting house. Some of his descendants have resided here ever since. His son Peter, who was born in 1791, lived here from the time of his birth until his death in 1837. He built the present Eagle hotel in 1829, the store house now occupied by Amos Haring in 1830, and the house now occupied by Mrs. Dr. Cooper soon after; he was repeatedly elected justice of the peace, had the reputation of being a remarkably reliable counselor at law for a layman; was an accurate conveyancer and an expert surveyor and served for some time as deputy surveyor general of Pennsylvania. He had three sons, Milton, Charles and Thomas and a daughter. Matilda became the wife of Dr. Frederick A. Martin.

During the century that spanned the years 1822 to 1922 the Cooper family would grow to have a remarkable impact on the town that still bears the family’s name, perhaps most notably with T.S. Cooper, a livestock dealer who was known as “The Jersey Cattle King.”

The Coopersburg Historical Society maintains an extensive collection of materials related to the Coopers as well as the history of the borough, and recently opened an exhibit about businesses that have contributed to making Coopersburg what it is today. The exhibit is located inside Coopersburg Borough Hall and may be viewed by appointment.

Olden Days is a Saucon Source column about the unique history of the areas we cover. 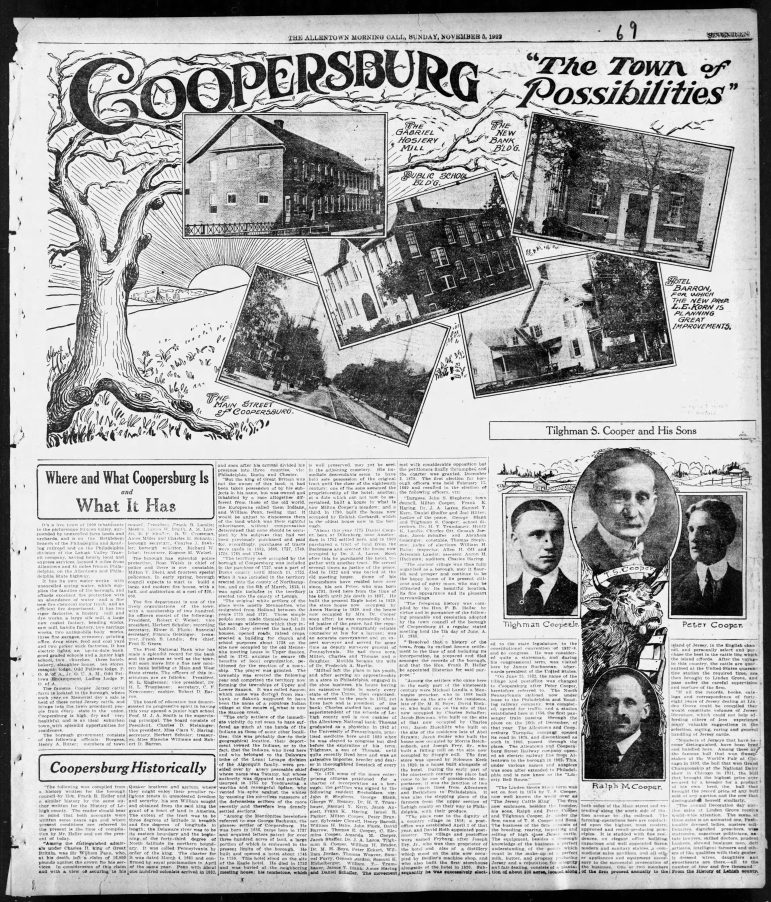 “Coopersburg: The Town of Possibilities” was a detailed profile of the community published in the Nov. 5, 1922 edition of The Allentown Morning Call.