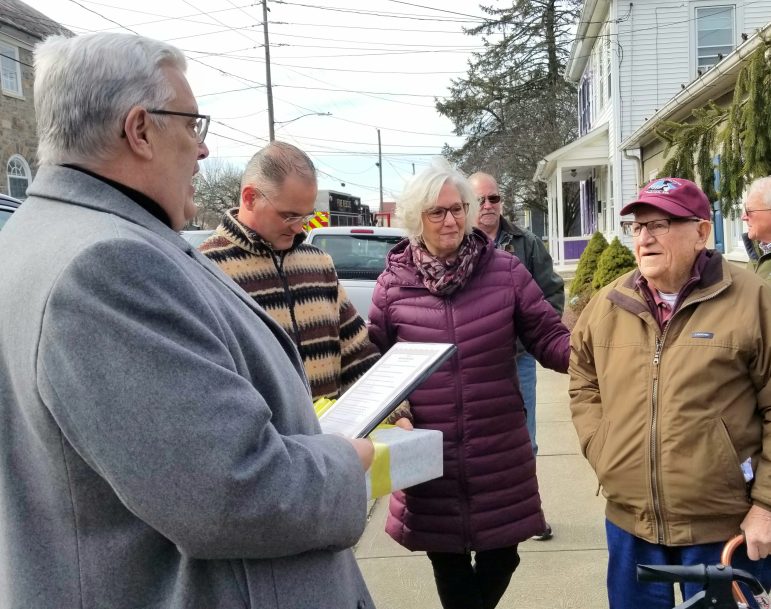 Hellertown Mayor David Heintzelman reads a proclamation declaring Feb. 24 Meryl John ‘Jack’ Reiss Day in Hellertown. Reiss, pictured at right, will turn 100 on Feb. 24, and his family arranged a special surprise celebration for him that included a procession of firetrucks and police cars on Saturday. Also pictured are Rev. Phil Spohn of Christ Lutheran Hellertown and Reiss’s daughter-in-law, Sue Reiss, who helped organize the celebration and a “card shower” for her father-in-law’s birthday.

It isn’t every day that a Hellertown resident turns 100, and it’s certainly a special occasion when the centenarian is able to celebrate that achievement with a surprise party organized by family, friends and neighbors.

That was the case on Saturday, when Hellertonian and soon-to-be-centenarian Meryl “Jack” Reiss was surprised with a drive-by procession of firetrucks and borough police vehicles.

The well-timed salute by local first responders was what alerted Reiss that something was up, and he ventured outside to witness what was just the start of his birthday surprise.

Outside his home of more than 60 years, Reiss was joined by his children, grandchildren and great-grandchildren just as a SUV driven by Mayor David Heintzelman arrived.

“Are we gonna go for 200?” Heintzelman asked Reiss jokingly, before telling him, “today is your day,” and noting that “the love of his life, Pearl” was with him in spirit.

The mayor then presented the World War II veteran and former Bethlehem Steel worker with a proclamation in which he declared Feb. 24–Reiss’s birthday–Meryl John “Jack” Reiss Day in Hellertown.

Reiss’s pastor, Rev. Phil Spohn of Christ Lutheran Church in Hellertown, was also present to lead the gathering in a prayer of gratitude for his parishioner’s good health. 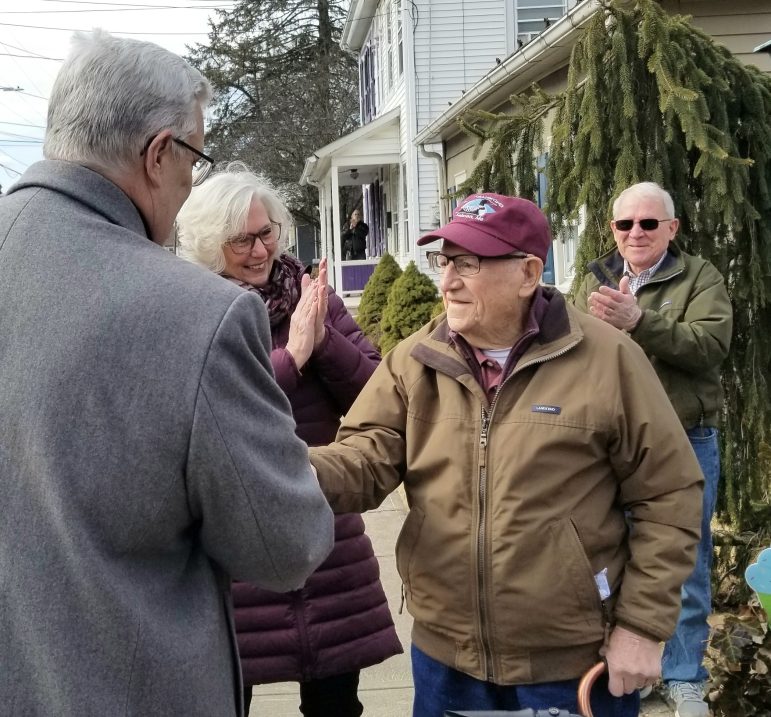 Hellertown Mayor David Heintzelman greets Meryl “Jack” Reiss outside his home on Saturday. A special early birthday celebration was organized to suprise Reiss, who turns 100 on Thursday, and as part of it Heintzelman proclaimed Feb. 25 Meryl John “Jack” Reiss Day in the borough.

Reiss has been a member of Christ Lutheran since before the current church was built in 1969, with Heintzelman noting in his proclamation that he attended services at the former church, which is now the Saucon Valley Community Center.

Spohn also presented Reiss with a gift box containing more than 100 birthday cards sent to him by members of the community who participated in a “card shower” that Saucon Source recently helped publicize.

“Hey, I did a little research, Jack and when you were born in 1922 do you know what gas cost?” Spohn asked him.

The actual price of a gallon of gas 100 years ago was 25 cents a gallon, Spohn said, and the hourly wage at that time was just 67 cents an hour; a pay rate Reiss said was more than what the “forty-two-and-a-half cents an hour” he earned years later when he began working at Bethlehem Steel.

“So you’ve seen a lot of changes,” Spohn told him.

Following the presentation of the cards, Reiss posed for a photo with his family, who planned to take him to a celebratory birthday luncheon.

Code Embed: Cannot use CODE265 as a global code as it is being used to store 4 unique pieces of code in 4 posts 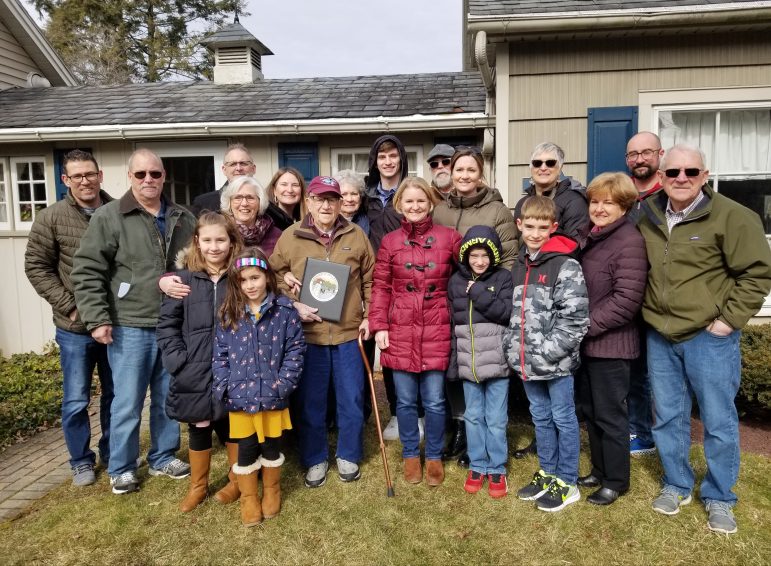 Hellertown resident Meryl “Jack” Reiss poses for a photo with his family, who surprised him with a celebration just a few days before his 100th birthday, which is on Feb. 24. Mayor David Heintzelman and Rev. Phil Spohn also attended and presented Reiss with a proclamation and a gift box containing more than 100 birthday cards sent to him by friends, neighbors and community members. 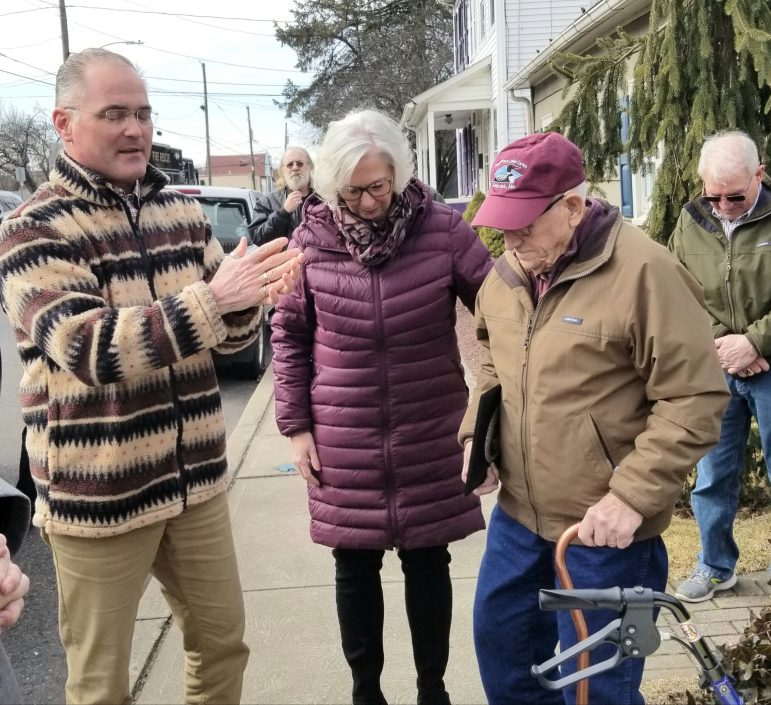 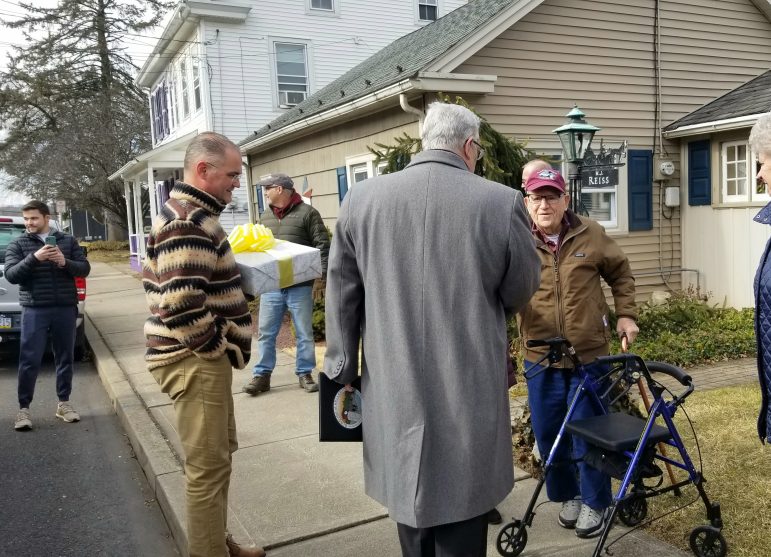 Mayor David Heintzelman and Rev. Phil Spohn of Christ Lutheran Church congratulate Hellertown resident Meryl “Jack” Reiss outside his home on Saturday. The community leaders were part of a surprise celebration Reiss’s family organized to help celebrate his 100th birthday, which is on Feb. 24. Reiss was alerted to the surprise by a procession of firetrucks that escorted the mayor and the minister to his home. The U.S. Navy veteran who served in World War II also received more than 100 birthday cards from friends, neighbors and community members, which were presented to him by Spohn. 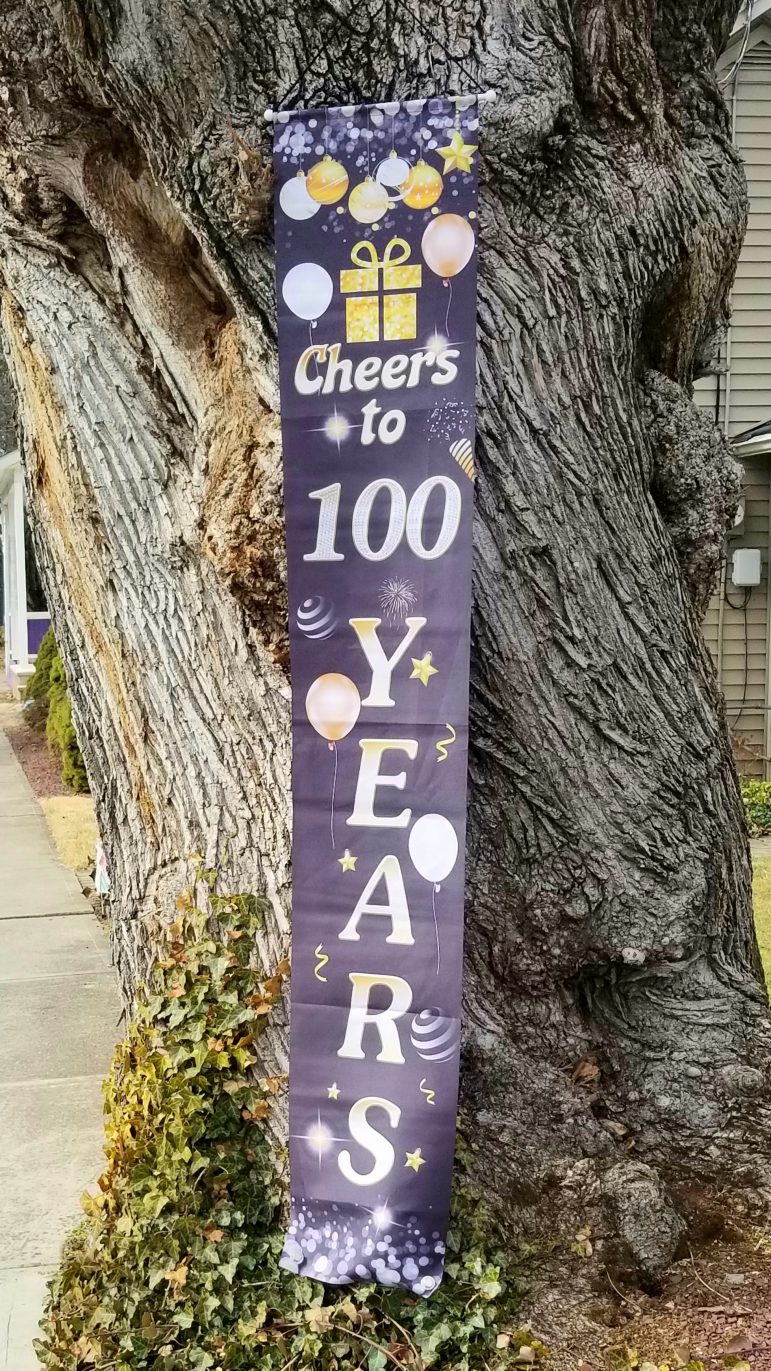 A banner decorates a large tree in front of Meryl “Jack” Reiss’s home. Mayor David Heintzelman said is one of the borough’s biggest trees at its base and is memorable because it was formerly used to post “No Parking” signs during parades in town.