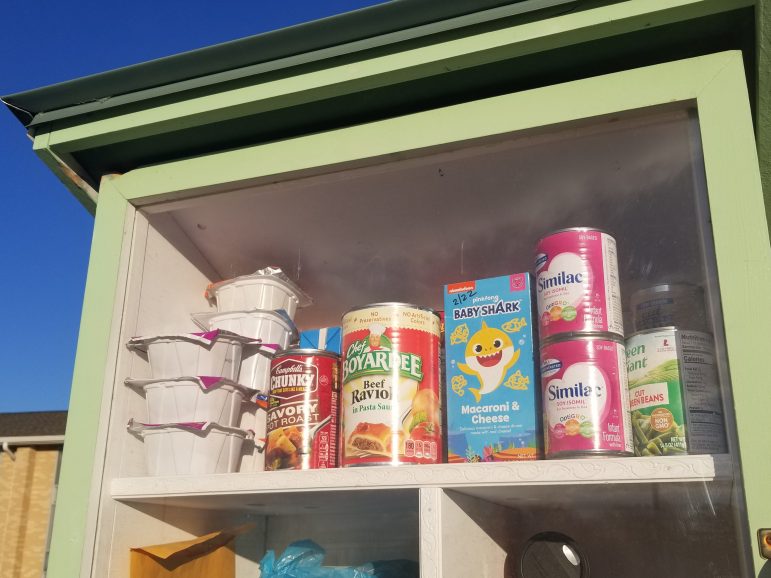 A “blessing box” outside the entrance to Christ Lutheran Church in Hellertown is kept filled by the members of the congregation. Anyone in need can access the food inside the micropantry, which was built by church member Ryan Salmon as part of an Eagle Scout project several years ago. Since that time, a number of other blessing boxes have been erected in the area. A group of volunteers that formed on Facebook during the coronavirus pandemic, Hellertown-Lower Saucon Neighbors Helping Neighbors, helps to keep them filled by monitoring them and sharing updates about them in their Facebook group.

It’s not exactly the season for growing fresh vegetables here in Pennsylvania, but that doesn’t mean those in need should go without nutritious produce, and thanks to the efforts of volunteers from Christ Lutheran Hellertown they don’t have to.

The caring congregation coordinates a food donation program as part of its mission to help feed the hungry in the community, church member and volunteer Kelly Meyer said.

The Christ Lutheran food donation ministry encompasses several different initiatives, one of which is a produce donation program that directly benefits families who are served by the food bank at New Jerusalem Lutheran church in Lower Saucon Township.

In the summer, the church is able to donate some of the produce it grows in its community garden to the food bank, however the bulk of what is donated is purchased by volunteer and church member Angela Drake at Valley Farm Market in Bethlehem.

Drake explained that her congregation used to collect produce at the church, but the vegetables were susceptible to spoiling, and after a while donations began to decrease.

At the suggestion of former church council president Lou Savant, Christ Lutheran then began to collect money to purchase produce at the supermarket, which Drake said has worked out well.

The produce sold by Valley Farm Market is ideal for the food bank, she said, because it is typically prepackaged, which makes transporting and distributing it easier. The supermarket also provides a five percent discount (in the form of a $25 gift card) when Christ Lutheran purchases $500 worth of produce.

All of the fresh vegetables and fruit Drake purchases each month are donated to the food bank. In the warmer months, when the church’s garden is productive, most of what is grown is delivered to senior citizens who live in public housing in Hellertown, including the Front Street Apartments and the high rise (Saucon Manor) on Northampton Street. 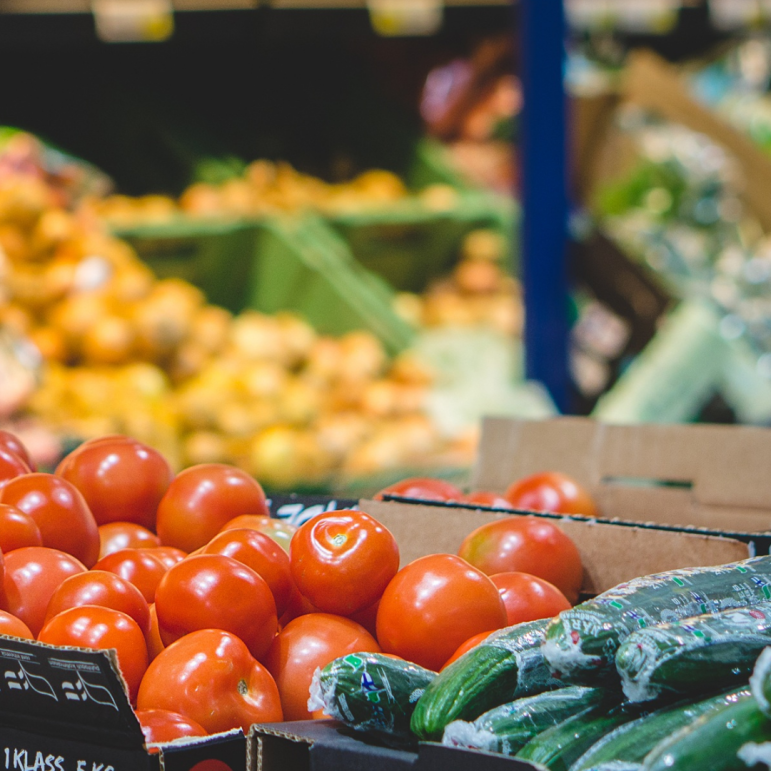 The congregation at New Jerusalem church also supports the produce purchase program for its food bank, which is run by volunteer Manny Aguilar.

With help from Christ Lutheran Church, Aguilar said the food bank has been able to double the amount of produce it distributes to about 100 Saucon Valley area families.

“Our biggest need for the food bank is actually to get the word out,” he said, adding that many people who visit the pantry are simply temporarily down on their luck.

“All it takes is one illness, or to lose your job,” Aguilar said, noting that the food bank is open on the third and fourth Saturdays of each month from 8:30 to 10:30 a.m.

Blake explained that the church has been collecting food for the food bank for over a decade. Before the pandemic, a box or a child’s wagon was kept in the church vestibule for dropoffs. However, when COVID-19 shuttered most sanctuaries nearly two years ago, it quickly became obvious that another means of collecting food would be necessary.

That was when the idea for a drive-thru operation was conceived, and Blake said it has truly been a blessing for all involved. The convenience of the regular event–which is held on the second Saturday of each month (except November and December) from 10 a.m. to noon–has allowed the monthly food drive to grow far beyond what it was pre-March 2020 by making it easier for donors from outside the congregation to contribute.

According to Blake, in 2019 Christ Lutheran collected 2,679 donated items for the food bank.

“Through March 2020, (the church) had collected only 264 items for the food bank,” he recalled. “In March 2020, one of our members, Lorita Musselman, mentioned to me something I had been mulling around in my mind: Could we do a drive-by collection for the food bank and would we get a positive response?”

The answer to that question was quickly proven to be a resounding “yes!”

By the end of 2020, the church had collected 6,754 items for the food bank, or more than twice the number it had collected the year before. And in 2021, the total number of donated food items surpassed 10,000 for the first time. Food drives held at the church’s preschool, the Children’s Learning Center, also helped grow the campaign to new heights.

“It’s never snowed and the sun’s always shined on us,” said Blake of the drive-thru dropoff events, which are held on the circular driveway in front of the church.

“Many of our contributors are regulars who are not church members, but love to see us and thank us for what we’re doing,” he added.

The next food donation drive-thru event will be held Saturday, Feb. 12, and if you forget, you can always check the electronic sign along Main Street in front of the church for a reminder.

That’s where many Christ Lutheran Hellertown happenings as well as community events are advertised, and thanks to Pastor Phil Spohn, you may even get a chuckle out of one of the many humorous sayings that are shared with passers-by.

If you’re familiar with the sign, and most in the area are, then it won’t be hard for you to find another important resource that is located in front of the church. 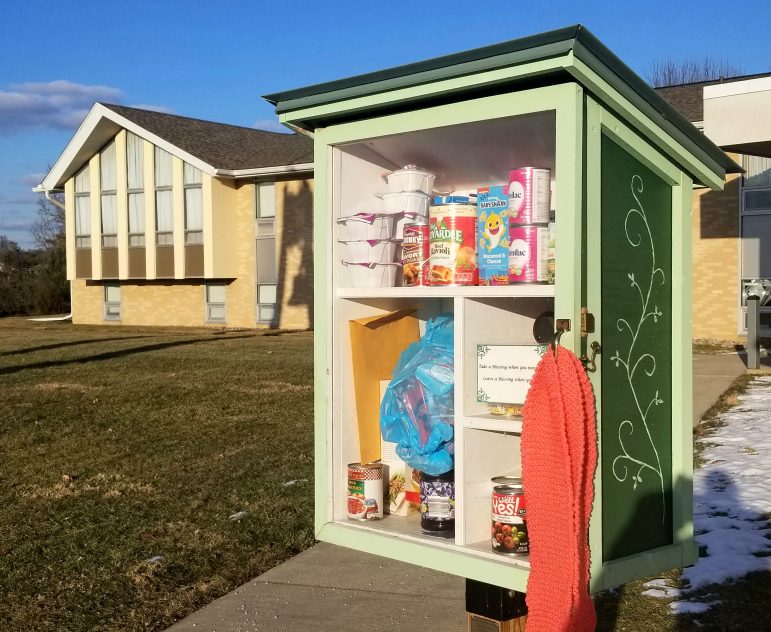 The blessing box Ryan Salmon built as an Eagle Scout project outside Christ Lutheran Hellertown continues to serve a diverse cross-section of the community, some of whom may be individuals who feel uncomfortable about visiting a food bank due to stigmas associated with accepting help from strangers. New Jerusalem church food bank director Manny Aguilar said it is not uncommon for people visiting the food bank for the first time to leave without entering it. Volunteers do everything they can to combat the stigma, however, so they can access the help they need. “It’s OK to come to the food bank,” he said.

That’s its “blessing box,” which was installed several years ago by church member Ryan Salmon as an Eagle Scout project.

The blessing box–also known as a micropantry–is essentially a large, wooden cupboard that is mounted outside and accessible to anyone who needs food, no questions asked.

Salmon’s was one of the first blessing boxes to be built in the Saucon Valley area, which has seen a proliferation in them since the coronavirus pandemic began, increasing food insecurity due to the economic impact the virus has exacted on many families.

“It felt really good” to build the blessing box, he said, noting that his dad and other Boy scouts from his troop helped with the project.

Salmon said he was initially worried about the box being used, but that has never been an issue, and on a recent mid-winter weekday it was filled to the brim with everything from Chef Boyardee canned pasta to Campbell’s Chunky soup, green beans and baby formula.

Regarding a possible connection between the increased generosity Christ Lutheran’s food donation program volunteers have documented and the ongoing health crisis that has enveloped the world for the past 22 months, Christ Lutheran’s Faith Community Nurse Enid Rank said, “I really think there is a correlation.”

“From the blessing box standpoint, I can for sure tell you there was a huge uprising in the use of that,” she said. “I would drive by and say, ‘Oh my god, the box is totally full,'” she recalled.

All of the volunteers who contribute time and energy to helping fight hunger in the community agreed that inflation is also impacting local families in need, many of whom receive a preset monthly amount to spend on groceries from the SNAP program.

Inflation also means that the church is able to buy less produce to donate to the food bank.

“Our dollar gets less and less because everything’s more expensive,” Drake commented.

With the continued support of members of both Christ Lutheran and New Jerusalem churches, however, those in need will continue to have their needs met, all agreed.

This mission to feed the hungry is part of a movement called Emergent Christianity, in which congregations are replacing discussions–and even disagreements–over doctrine with actions everyone can agree on because they are rooted in the teachings of Jesus.

“I think that’s the future of the Christian church,” said Spohn.

To learn more about how Christ Lutheran Hellertown is feeding the hungry in our community, as well as ways in which you can help, visit the church’s website.

For more information about donating food to the New Jerusalem Evangelical Lutheran church food bank, visit their website and/or contact the church secretary at 610-838-0731.