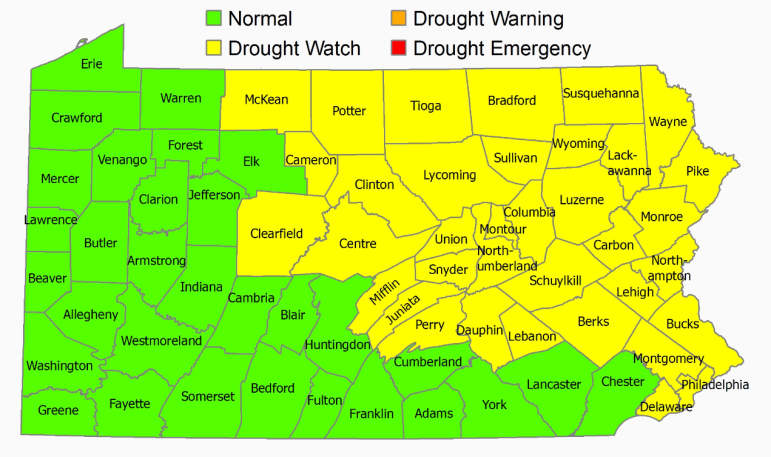 The Pennsylvania Department of Environmental Protection has announced a drought watch for 36 of the state’s 67 counties. Lehigh, Northampton and Bucks counties are all part of the watch area, in which millions of residents are now being asked to voluntarily curtail their water use. (Credit: PA DEP)

If it seems like it’s been a dry summer, that’s because it has been. In fact it’s so dry that the Pennsylvania Department of Environmental Protection (DEP) has issued a drought watch for Lehigh, Northampton, Bucks and 33 other counties where drought is a concern.

The counties included in the drought watch issued Wednesday by the agency’s Commonwealth Drought Task Force are all located in the north central, northeastern and southeastern parts of the state, where Philadelphia is included under it.

“We’re asking Pennsylvanians in all of these counties to use water wisely and follow simple water conservation tips to ease the demand for water,” said DEP Acting Secretary Ramez Ziadeh in a news release about the declaration.

Residents who live in the affected counties are being asked to reduce their individual water use by 5 to 10 percent, which is three to six gallons of water per day on average.

The DEP said it is notifying all water suppliers in affected counties of the need to monitor water levels and be prepared by updating their drought contingency plans as necessary.

As of Wednesday, only two public water suppliers were requiring residents to reduce their water use: Galeton Borough Water Authority in Potter County and Waterville Water Association in Lycoming County.

Residents are being asked to voluntarily reduce their water usage by six other suppliers, including the Palmerton Municipal Water Authority and Pennsylvania American Water Company (Bangor District) in Carbon County, just north of the Lehigh Valley.

How did it get so dry?

Residents of Lehigh and Northampton counties were enjoying a wetter than average year until late June, when unusually dry weather set in and rainfall fell to below normal levels.

Although 2.84 inches of rain was recorded at Lehigh Valley International Airport near Allentown in August, the normal total rainfall for the month is 4.43 inches.

More than a trace of precipitation was recorded on just four days in August, when the region’s only heavy rain fell on Aug. 22. That day more than two-and-a-half inches was measured at Allentown, according to National Weather Service data.

With autumn around the corner the short-term forecast for the area appears mostly dry, with the next chance of precipitation expected Sunday and Monday, which is Labor Day.

For more information on how the DEP monitors conditions and makes drought status declarations, see their drought management fact sheet.

The next Commonwealth Drought Task Force meeting will be on Tuesday, Sept. 13 at 1 p.m., the DEP said.

The DEP also shared tips for water conservation, which residents in the counties now under a drought watch are being encouraged to follow. 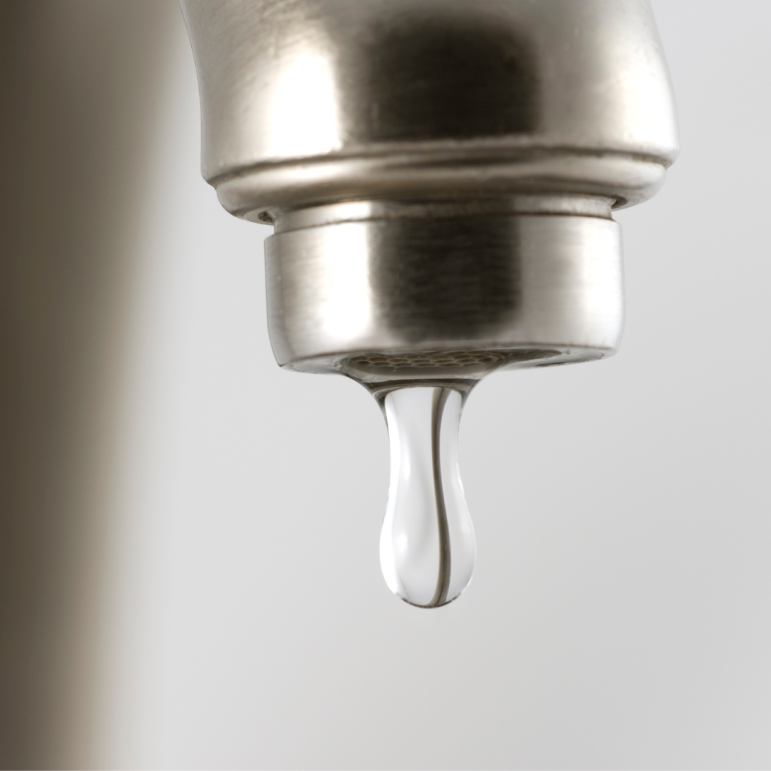 Residents of the affected counties are being urged to voluntarily conserve water by running washing machines less frequently and being more conscientious about the potentially wasteful watering of plants and lawns.

Ways to Conserve Water at Home

• Run water only when necessary. Don’t let the faucet run while brushing your teeth or shaving, and shorten the time you let the water run to warm up before showering.

• Run the dishwasher and washing machine only with full loads.

• Water your garden in the cooler evening or morning hours and direct the water to the ground at the base of the plant, to minimize the amount of water wasted through evaporation.

• Water your lawn only if necessary. Apply no more than one inch of water per week (use an empty can to determine how long it takes to water one inch). Avoid watering on windy and hot days.

• When mowing your lawn, set the blades to two to three inches high. Longer grass shades the soil, improving moisture retention. It also grows thicker and develops a deeper root system, so it can better survive drought.

• Check for and repair household leaks. For example, a leaky toilet can waste up to 200 gallons of water daily.

• Sweep your sidewalk, deck and driveway with a broom instead of hosing it off.

• Replace older appliances with high-efficiency, front-loading models that use about 30 percent less water and 40 to 50 percent less energy.

• Install low-flow plumbing fixtures and aerators on faucets whenever possible.