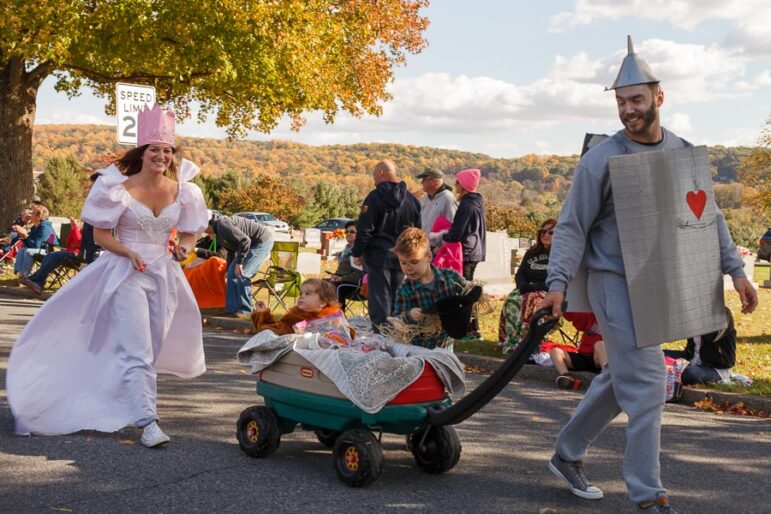 Now that fall has arrived, it’s time to put important annual events like Halloween parades and Trick-or-Treat nights on calendars.

One of the most beloved fall events in the Saucon Valley area is the Hellertown Halloween Parade. (See below for other local Halloween parade dates and times.)

Known as the Saucon Valley Spirit Parade for roughly a decade, the iconic local parade was rebranded over the summer, but promises to deliver the same smiles as usual.

This year’s parade will be held Sunday, Oct. 23 at 2 p.m. in Hellertown. (There is no rain date for the parade.) Lineup will take place from 12:30 to 1:30 p.m. at the Saucon Valley School District campus.

The parade route will be the familiar loop that begins and ends at district campus on Panther Way. Six divisions comprised of floats, groups, individuals, marching bands, fire trucks, police, emergency vehicles and others will march along Walnut Street to Main Street to Water Street to Rentzheimer Drive to Durham Street to Constitution Avenue before completing the loop back at the schools.

The 2022 parade theme is “Cherishing our Past, Embracing our Future,” which is also the Borough of Hellertown’s motto.

New for 2022 will be a community picnic at Dimmick Park immediately following the parade, with live music by the band GIRLCRU from 4 to 7 p.m. at the bandstand. In addition to complimentary refreshments, there will be food trucks on site, according to the borough. There is a Facebook event listing for the picnic to follow for updates.

The Hellertown Post Office is once again collecting donations of Halloween candy for its candy refill station for floats near the parade route’s halfway point. Donations of bagged, unexpired Halloween candy can be placed in the drop-off box in the post office lobby during regular business hours: 8:30 a.m. to 5 p.m., Monday through Friday, and 8:30 a.m. to noon Saturday. The post office is located at 660 Delaware Ave., Hellertown.

During the parade, the Friends of the Hellertown Area Library will host their annual Bake Sale and Fall fundraiser in front of the library at 409 Constitution Avenue (across from Dimmick Park). In addition to tasty treats and hot coffee the group will have hot dogs, pierogies and drinks for sale starting at noon, as well as a mobile snack cart from which parade spectators will be able to purchase “treats on the go.”

The weekly Saucon Valley Farmers’ Market held next to the library will be open on Sunday, Oct. 23, however some vendors, the information booth and the cafe seating areas will close early, at noon, due to the parade route setup along Constitution Avenue.

Most of the roads that are part of the route will be barricaded by police by 1 p.m., and motorists should expect to encounter detours in the area for the duration of the parade.

More information about detours that will be in place will be shared prior to parade day.

Spectators should also expect to see parade committee volunteers collecting donations along the parade route, to help fund future parades. In additional to individual donors, many local businesses sponsor the parade each year.

Trick-or-Treat in Hellertown and Lower Saucon Township will be held from 6 to 8 p.m. on Monday, Oct. 31. Homes that are participating should turn on exterior/porch lights.