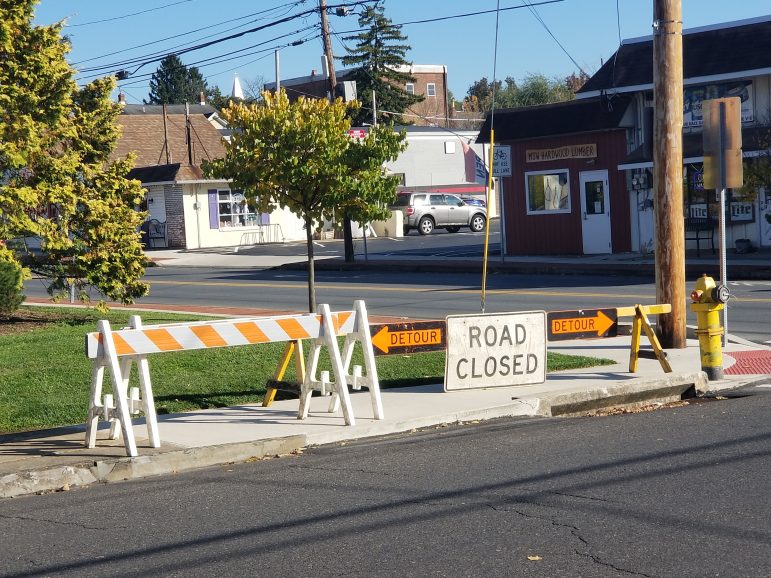 Above, barricades line the sidewalk next to the intersection of Front and W. Water streets in Hellertown, in preparation for Sunday’s Halloween Parade. The parade will begin at 2 p.m., however roads along the parade route will be closed and barricaded by 1:30 p.m., borough officials said Thursday.

Along with the fun of this year’s Hellertown Halloween Parade, there will be some minor inconveniences for local residents as a result of road closures along the parade route.

Borough officials are doing their best to keep the inconvenience to a minimum by alerting residents to where roads will be closed and sharing detour information in advance.

The 2022 parade will begin and end at the Saucon Valley School District campus, near the intersection of Panther Way, Constitution Avenue and E. Walnut Street.

“All roads within and around the parade route will be shut down by 1:30 p.m.,” Thursday’s announcement said, and will remain closed until the parade’s conclusion.

“If you live within the parade route, you will not be able to enter or leave during this time,” officials stressed.

Detours will be in place for Main Street traffic, but motorists who normally travel Rt. 412 should expect delays if they plan on traveling through any part of town during the parade.

Officials also reminded residents and others not to move the barricades that will be set up.

The judges’ stand for this year’s parade will be located next to Borough Hall, near the northeast corner of the intersection at Main and Water streets.

A platform for television coverage of the parade will be located on Main Street near Saucon Street.

New for 2022 is a community event that will be held in Dimmick Park following the parade, from 4 to 7 p.m.

The Special Community Celebration has been planned to help celebrate the 150th anniversary of the borough’s incorporation, as well as the upcoming 125th anniversary of Dewey Fire Company’s founding.

Hellertown was settled circa 1742, but wasn’t incorporated as a borough until 1872.

Sunday’s party in the park will feature a live band from 4 to 7 p.m., food trucks and possibly surprises, such as a haircut for charity a borough elected official may receive.

First UCC of Hellertown will be providing hot dogs and water free of charge, while supplies last.

There is no rain date for the parade, which will begin at 2 p.m. As of Thursday afternoon, there was a 40 percent chance of rain in Sunday’s National Weather Service forecast for Hellertown.