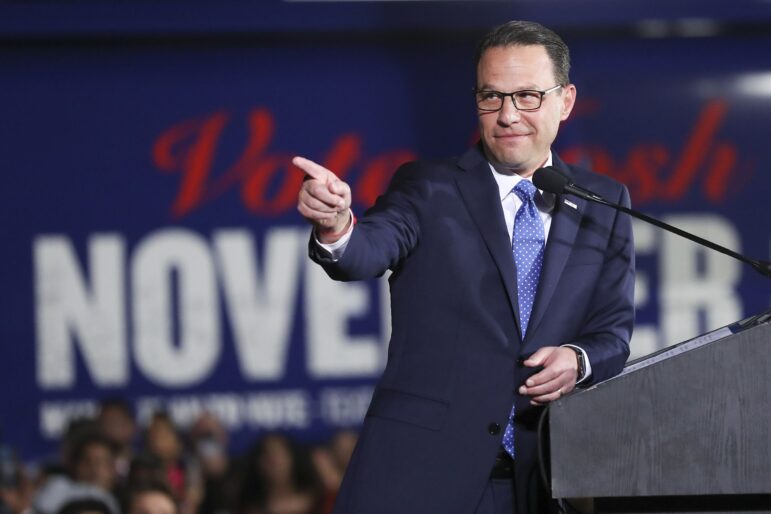 “While my name was on the ballot, it was always your rights, it was always your futures that were on the line right here in the commonwealth,” Shapiro said at a victory party in Montgomery County. “It was a test of whether or not we valued our rights and freedoms and whether we believed in opportunity for all Pennsylvanians. And tonight, I humbly stand before you as your governor-elect knowing that you met this moment.”

The AP’s election analysts call races when a “trailing candidate no longer has a path to victory”–an assessment the outlet makes by studying vote totals county by county and comparing returns with ballots left to count.

Mastriano, a state senator from Franklin County, spoke to supporters at a campaign party in Camp Hill shortly before midnight and did not concede.

Around 10 p.m.–after a prayer asking God to prevent fraud and after a band played “Don’t Stop Believin’”–Mastriano exhorted hundreds of supporters to keep the faith in his electoral odds.

“We’re going to take this fight all the way to Harrisburg,” Mastriano said. “This movement is unstoppable.”

Mastriano has been one of Pennsylvania’s most prominent proponents of baseless election fraud theories, and had wrongly claimed before Election Day that the slower pace for results because of mail ballots was an “attempt to have the fix in.”

Shapiro, of Montgomery County, has served since 2016 as the commonwealth’s attorney general. He has spent decades in Pennsylvania politics and is broadly seen as a moderate with a knack for building consensus and tricky backroom dealmaking.

In his race for governor, he sought to cast himself as the reasonable choice compared with Mastriano. In one ad, he called his opponent’s stated opposition to abortion in all cases “way too extreme.”

Shapiro, who says he supports Pennsylvania’s current abortion laws, which allow the procedure until 24 weeks and later in medical emergencies, leaned into the issue after the U.S. Supreme Court overturned Roe v. Wade, anticipating that voters would be galvanized by the ruling.

In other ads, Shapiro highlighted a 2001 thesis Mastriano wrote, calling it a “bizarre manifesto,” noted his opponent’s connection to QAnon conspiracy theorists and flagged a donation Mastriano received from the founder of right-wing site Gab, which often features anti-semitic and white supremacist speech.

For his part, Mastriano has tried to argue throughout the race that his views, not Shapiro’s, are actually the mainstream ones. Most frequently, he bases that case on Shapiro’s defense of the state’s COVID-19 precautions as attorney general, and also blames Shapiro for crime rates and asserts without specific examples that Shapiro supports “woke gender ideology” and the “sexualization of minors.” 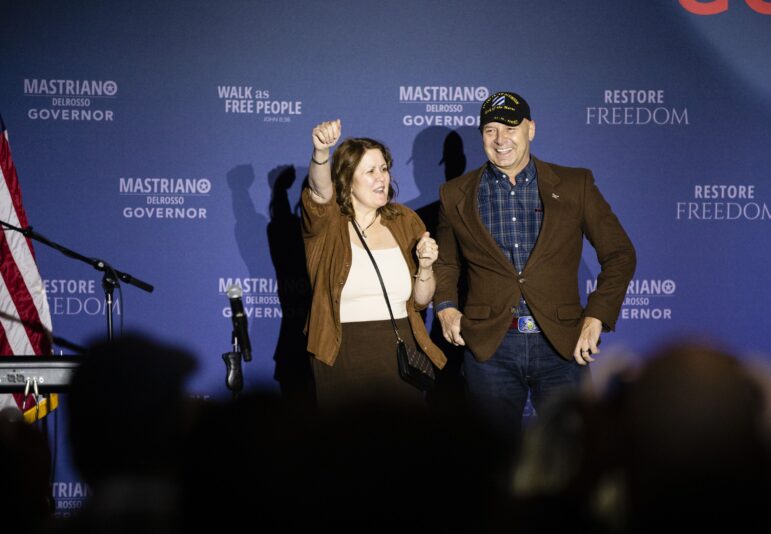 Doug Mastriano takes the stage with his wife Rebbie at his election night watch party in Camp Hill Tuesday.

Shapiro has tried to stake out a middle ground on some of Pennsylvania’s most contentious issues–in some cases, by avoiding taking firm stances.

On the campaign trail, he avoided saying whether he will keep Pennsylvania in the Regional Greenhouse Gas Initiative–a plan in which energy producers purchase allowances to emit carbon dioxide, the profits from which go into renewable energy investments.

He has been a proponent of putting more money into public schools and routing that money through a funding formula designed to more fairly allocate resources. At the same time, he took a position some fellow Democrats see as contradictory–arguing that Pennsylvania should fund scholarships that allow students to leave public schools for private ones, if they want.

But during his gubernatorial run, Shapiro broke with Wolf and much of the rest of his party, saying he thinks “folks got it wrong” on school and business shutdowns, and that he opposes mask and vaccine mandates.

After coasting through a primary in which he managed to emerge as the sole mainstream Democratic candidate, Shapiro entered the general election with a formidable financial advantage over Mastriano’s shoestring campaign.

That difference only compounded as Mastriano failed to win support from major Republican donors, and Shapiro racked up a historically deep campaign chest. His supporters included some Republicans who opposed Mastriano as their party’s candidate, as well as state and national Democratic groups and labor unions.

After a stint working for Democrats in Washington, D.C., Shapiro began his elected career as a state representative in 2005, flipping a Montgomery County seat Republicans had held for 20 years. Six years later, he was elected to Montgomery County’s board of commissioners and became its chair, again ushering in a significant political shift–the first time in history that Democrats had been the majority in Montgomery County government.

It was in those roles that Shapiro began building his reputation as a pragmatist.

As a state representative, he helped broker a novel scheme that allowed Democrats to elect a hand-picked, cooperative Republican as state House speaker in order to maintain power in the chamber during a period of closely divided control. As a commissioner, his fellow county officials recognized him for helping to broker a period of unanimity on a board that had often been publicly acrimonious.

In 2016, with then-state Attorney General Kathleen Kane under indictment and her law license suspended, Shapiro was elected to his first statewide position. He promised to restore stability to an attorney general’s office plagued by scandal.

In the years since, he has become perhaps best known for the office’s 2018 release of a landmark grand jury report on longstanding sexual abuse of children in Pennsylvania’s Catholic dioceses.

Other high-profile efforts during his time in office included criminally charging the energy company responsible for a controversial natural gas pipeline project, adding Pennsylvania to dozens of national lawsuits against the Trump administration for things like family separation at the southern border and reducing access to contraception, and defending Pennsylvania’s election laws against the Trump campaign and other Republicans’ efforts to invalidate ballots.

Shapiro will be taking over the governorship from Wolf, who was elected to two terms and constitutionally prohibited from seeking a third. His election marks the first time since 1967 that Pennsylvania has elected two consecutive governors from the same party.

The state’s next lieutenant governor will be state Rep. Austin Davis (D., Allegheny), the first Black person to hold that position. Davis said in a speech Tuesday that this “is a moment that defines us as a commonwealth, that says to extremists … that we won’t go back and we’ll never back down.”

For Lee Geisler, who was standing in the crowd waiting to meet Shapiro while wearing a large Shapiro sign and holding one for Democratic U.S. Senate candidate John Fetterman, the win felt personal.

But Geisler, who is 65 and lives in Philadelphia, said he wasn’t just supporting Shapiro because he dislikes Mastriano.

“He’s not afraid of a battle,” Geisler said. “And I think we need more Democrats who are a little less timid.”