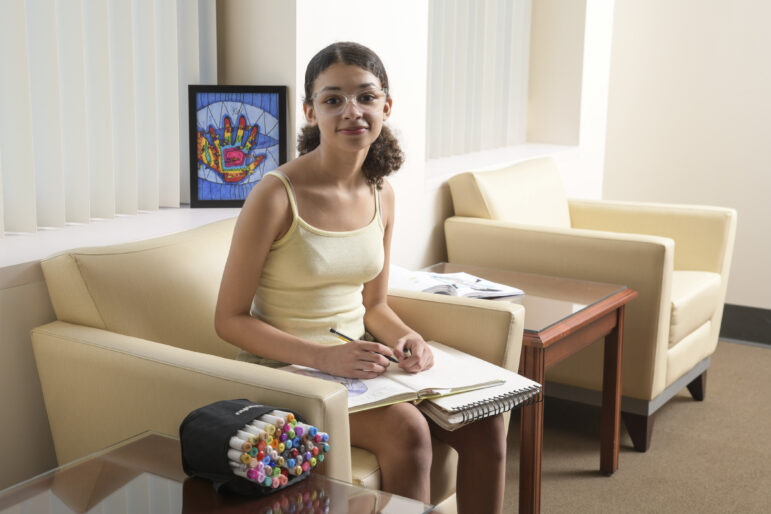 Philadelphian Kennedy Woods traveled to Bethlehem to receive surgical treatment for her scoliosis from Dr. Dustin Greenhill of St. Luke’s Orthopedic Care. Kennedy and her mother, Jennifer Ortiz, said it was the best decision they could have made. (Contributed photo)

Last year around this time, Kennedy Woods of Philadelphia felt like she couldn’t sit, walk or stand in a normal, comfortable position. Her teenage spine, curved dramatically by scoliosis, which was diagnosed in 2020, worsened as the 13-year-old grew.

Scoliosis affects more than two million children in the U.S. (over 100,000 children per year are newly diagnosed with this disorder). More than 80 percent of children with scoliosis are adolescent (aged 11-18), and the majority of them are female. Scoliosis in children can occur in isolation (termed “idiopathic”) or be associated with another orthopedic condition.

Kennedy’s daily homeschooling, drawing and video gaming, which should have brought her pleasure and fulfillment, became a frequent source of frustration that most kids her age never experience.

Today, thanks to the compassion, knowledge and surgical skills of pediatric orthopedic surgeon Dustin Greenhill, MD, of St. Luke’s Orthopedic Care, Kennedy can sit and stand for hours and walk easily, with her back now as straight as her teenage peers.’

St. Luke’s University Hospital in Bethlehem is one of the few places in the country offering both high-level adult and pediatric spinal deformity surgery. Its operating suites are equipped with the most advanced surgical technology and specialty personnel utilized in scoliosis surgery today. Dr. Greenhill has treated hundreds of children with scoliosis and was elected by his peers to the international Scoliosis Research Society. He has presented and published research on appropriate preoperative planning, safe surgical technique and accurate intraoperative assessment of a corrected spinal deformity.

“Kennedy’s scoliosis was progressive, and was slowly twisting her spine,” said Dr. Greenhill. “It reached a size that proved it could be a lifelong problem if not addressed.”

On Aug. 2, Dr. Greenhill surgically corrected the curved upper portion of Kennedy’s backbone between her shoulders. She feels “better than she’s felt in years,” crediting her surgeon who performed the transformative operation that quickly improved her life.

“Dr. Greenhill is a great doctor,” said Kennedy, who went home just three days after he straightened her 60-degree scoliosis. 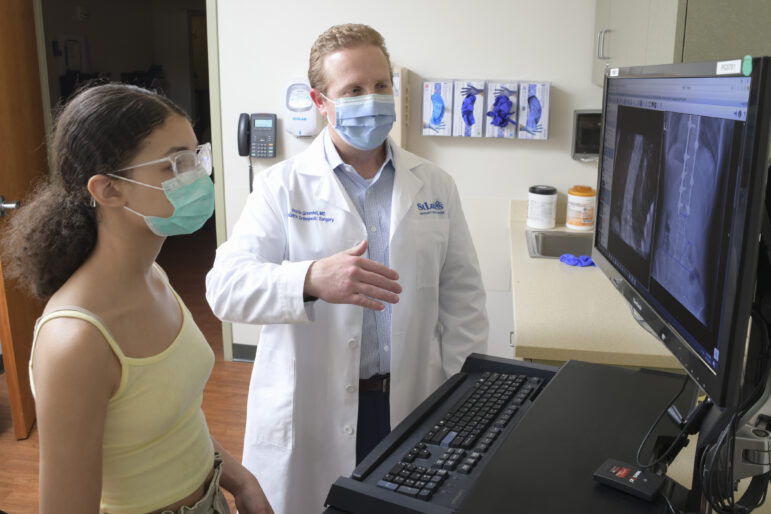 Dr. Greenhill is the region’s only fellowship-trained pediatric orthopedic surgeon who specializes in treating all childhood and adolescent orthopedic conditions, including scoliosis, fractures and other arm and leg disorders. He routinely performed scoliosis and other complex orthopedic procedures on children and teenagers in Philadelphia before being recruited to join the growing team of pediatric subspecialists at St. Luke’s University Health Network.

During his transition from Philadelphia to St. Luke’s University Hospital in Bethlehem in 2021, Dr. Greenhill offered Kennedy’s mother, Jennifer Ortiz, a referral to a pediatric orthopedic surgeon near their home in Philadelphia. However, since both she and Kennedy had known him for several years and trusted him without reservation, she chose to take her daughter to Dr. Greenhill.

Always taking a conservative treatment approach first, Dr. Greenhill fitted Kennedy with an upper-body brace that she wore for 15 months. But the spine continued to bend, a serious deformity that could eventually affect Kennedy’s lung function.

“It kept getting worse as she grew,” said Jennifer, the mother of three daughters. When Dr. Greenhill eventually recommended surgery, she knew it was the right decision.

“Patients get scoliosis surgery in order to avoid debilitating deformity, breathing problems and chronic pain associated with severe curves,” explained Dr. Greenhill. Less than one percent of scoliosis patients should undergo surgery to correct the condition, he added.

“I was 100 percent comfortable having Dr. Greenhill operate on my daughter to correct this problem,” said Jennifer.

The results are undeniable when you see Kennedy’s perfect posture, she said, adding, “It’s amazing how straight she is now, and her scar looks great!”

She tells family and friends that traveling to St. Luke’s in Bethlehem was the best choice she could have made to help her daughter receive the life-enhancing, corrective surgery by an extraordinary surgeon and his terrific team.

“Dr. Greenhill is a wonderful doctor, and every pediatric specialist who took care of us in the operating room, the pediatric intensive care unit and the pediatric inpatient unit was fantastic,” she said. “We can’t thank them enough.”