In case you don’t follow along closely with Lower Saucon Township Council meetings, you may not be aware that the Bethlehem Landfill Company (BLC) has written up zoning changes they want and the majority on our Council appears favorable to making them.

What changes does the Landfill want?

1. Update the township zoning map to change seven parcels of land totaling 275 acres from being Rural Agricultural to Light Industrial. (See the map below). This would allow for different industrial uses on the land. Sadly, the land they want to expand the dump on is beautiful, forested land with steep slopes and a stream. 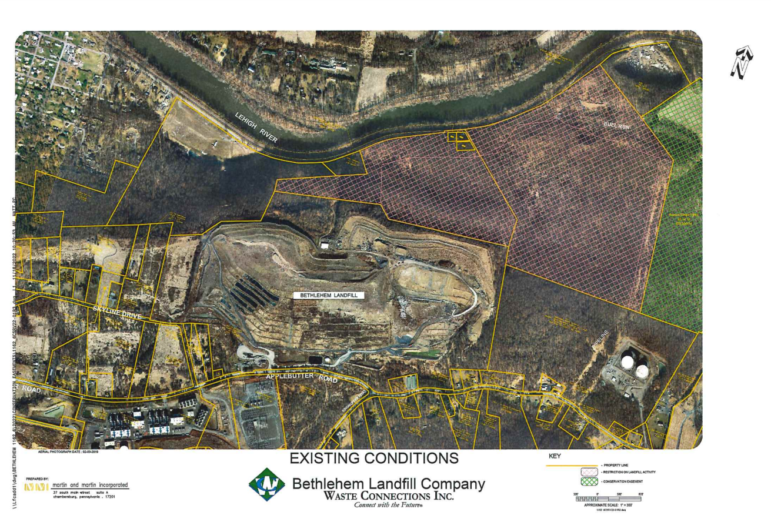 Above, a map shows the area (cross-hatched in pink) that would be rezoned under proposed changes to the Lower Saucon Township zoning map. The proposed rezoning would allow for the adjacent Bethlehem Landfill to expand across approximately 275 acres. The landfill is located on Applebutter Road in the township. (Credit: Lower Saucon Township)

2. In zoning section 180-109, they want to add a new section: G. Natural Resource Mitigation Alternative. This new section basically says that regardless of the amount of Permitted Net Buildable Area [as calculated in zoning code section 180-95(C)(2)], they can build on as much of the site as they want. Following the current zoning code, the permitted net buildable area would probably be very low. But with the changes, they would only need to pay a fee-in-lieu-of or dedicate other land in the Township; land which would not need to have the same environmental resources as that on which they want to build.

3. In zoning section 180-109(F), they want to add a section to say they would not be subject to the site plan approval process, since they will be getting land development approval and a DEP permit.

4. Finally–and very importantly–they want to change the use of Landfills and Waste Disposal Facilities from being a Special Exception Use to being a Conditional Use in zoning sections 180-79.1 and 180-80. What this means is that BLC would not need to go to the Zoning Hearing Board to get the approval for their expansion. Instead, they will only need approval from the Township Council. This also would mean that adjoining landowners do not receive a notification of this either, since there will be no zoning board hearing to approve the land use. Considering that Council had no obligation to consider any of this, but have moved forward with advertising a hearing for the adoption of the proposed changes, it is highly unlikely that Council will not approve these changes. I think it is not uncoincidental that the corporation that owns the landfill has been funding PACs with large amounts of money in support of electing specific candidates on Lower Saucon Township Council. They seem to have hit the jackpot with the current board.

Good luck finding any information about this on the Township website. As with other things that have been happening over the past couple of years, transparency is lacking.

What can you do? Become familiar with the zoning ordinances referenced above at by reading the Township of Lower Saucon, PA Zoning Code (ecode360.com). Read the October meeting minutes and watch the livestream recordings of the October and November meetings available on the Saucon Shenanigans blog’s Facebook page. Write to the council members and other elected officials to express your opinion. Plan to attend the next Council meeting on Wednesday, Dec. 7 at 6:30 p.m. at Lower Saucon Town Hall, and–if you’re a resident/taxpayer–speak up during the public comment periods. Plan to attend the public hearing on Wednesday, Dec. 21 at 6:30 p.m. and provide testimony.

This is a letter to the editor. Letters must be signed and should be about local subjects of general interest. To submit a letter for consideration email it to josh@sauconsource.com.