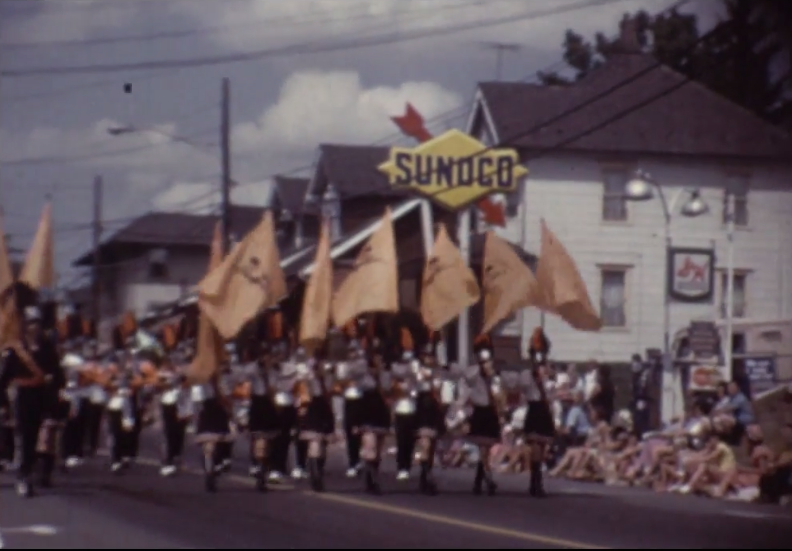 In 1972 there was a Sunoco gas station where Csencsits Auto Services is today, at the corner of Main Street and Wilson Avenue in Hellertown. The roof of Crossroads Hotel can be seen in the background, behind the marchers on the left. 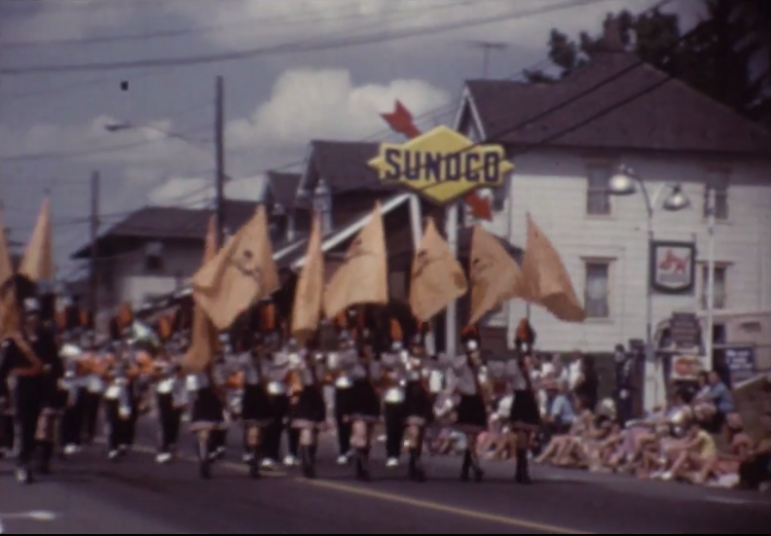 In 1972 there was a Sunoco service station where Csencsits Auto now is, at the corner of Main Street and Wilson Avenue in Hellertown. The roof of Crossroads Hotel can be seen in the background behind the marchers on the left.

Forty-five years ago a watershed event in the history of Hellertown occurred–and it involved a celebration of local history.

In the summer of 1972, just about the entire town came together to celebrate the 100th anniversary of the borough’s incorporation with festivities many people fondly recall to this day.

One of the highlights of the year-long celebration was a mammoth parade down Main Street that featured marching bands, residents dressed in historic garb, the “Keystone Kops” and other skits, floats and much more.

According to a May 1992 Morning Call article about the borough’s 275th anniversary, the parade was probably the largest in the borough’s history.

“News accounts reported 3,500 participants and 10,000 viewers along the 2.3-mile route,” Tad Miller wrote in that story. “Borough residents needed 10 days to get the centennial celebration out of their systems. A five-layer birthday cake was distributed, Jennie Chaffier was crowned queen and Family Day was highlighted with an ox roast attended by 600. Many residents participated in the traditional Brothers of the Brush and Centennial Belles organizations that were formed. The town also paid homage to its religious heritage and recognized the efforts of women.”

“Firefighters in 1972 came to Hellertown to share in the centennial celebration, which coincided with the association’s 75th anniversary,” Miller wrote. “Seventy-three fire companies and 18 bands paraded.”

This rare silent footage of that parade was filmed by Jon Gushen on two cartridges of super 8mm and recently converted to DVD–and shared with Saucon Source.

“It was a very hot day, 90 degrees plus,” Gushen recalled. “I remember a girl in one of the high school bands passed out before it even started. The parade was much longer because of the major backup in the start of the parade.”

Gushen was positioned at a point on Main Street across from what is now Csencsits Auto Services, not far from where the parade began at Cherry Lane.

Gushen said his video has a motion similar to silent movies because his family always videotaped at the fastest speed, which maximized the length of the video.

The last clip (below) is of a humorous skit called “Digger O’Dell,” who he explained was a character on the Life of Riley TV show in the 1950s. He added that some of his immediate family members and relatives were in the skit.

If you have memories of the parade, the people in it, the buildings in the background or the Hellertown Centennial in general please share them in the comments.

On Friday, Aug. 25, from 6 to 9 p.m., the Hellertown Historical Society will host a special event remembering the Centennial celebration, at which a museum exhibit about it will be unveiled. Click here to view the Facebook event.