So many truck drivers are exiting Interstate 78 at Rt. 412 and mistakenly heading down nearby narrow Hellertown side streets that the borough needs to try and ban them from those roads completely, council decided Monday. 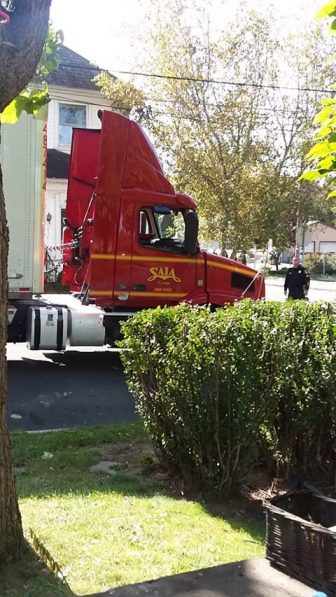 Hellertown Police Sgt. Jeff Johnston assists the driver of a tractor-trailer who mistakenly drove down Kichline Avenue and became stuck in October 2018.

Borough council voted 6-0 spend up to $5,000 on engineering studies and signage for Kiernan and Kichline avenues, which connect Main Street to Clauser Street.

The engineering studies are required if the borough wants to ban trucks from those roads, council was told.

Clauser Street is where a large truck recently ended up in someone’s yard, which prompted a council discussion about the possibility of banning trucks in the neighborhood last month.

“It’s not safe,” said Hellertown Police Chief Robert Shupp of the current situation, which was documented last month by a Kichline resident who said wayward semis are a regular sight for her and her neighbors.

Typically residents and/or the police need to help the drivers back out of the narrow streets.

“They get off (the highway), they know they screwed up and they try to turn around to get back on it,” Shupp said of the truck drivers.

Council discussed the possibility of conducting an engineering study of Clauser Street, but Shupp said it wouldn’t be necessary, since the only way the trucks are reaching Clauser is via Kiernan and Kichline.

One thought on “Hellertown Will Try to Ban Trucks on Kiernan, Kichline Avenues”