The issue of the signage was brought up during a discussion about a recent traffic-related incident in which a large truck drove down either Kichline Avenue or Kiernan Avenue and ended up in a yard on Clauser Street. Shupp told borough council his department hasn’t received any complaints similar to this one in a while. 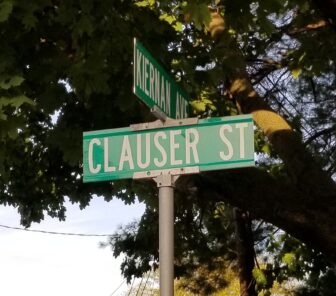 The neighborhood in which this happened is close to the I-78/Rt. 412 exit in Hellertown.

However the day the wayward truck entered Clauser Street, the interstate between Hellertown and Rt. 33 was closed for more than 12 hours because of a serious accident. As a result of the detours that had to be put in place, some truck drivers who were unfamiliar with local roads became stuck on side streets in towns throughout the area, Shupp said.

In spite of its proximity to the highway, Shupp said these incidents have not been common in the north Hellertown neighborhood.

He said a truck ban there isn’t needed, but he advised council to keep in mind that as of December prohibiting trucks on any local street will be much costlier than it is currently.

That’s because as of December the state will require that an engineering study be conducted when officials want to ban truck traffic on any local road, Shupp said.

Existing signed roadways will be grandfathered, so new studies for them won’t be required.

An engineering study typically costs thousands of dollars, but prices can vary considerably based upon the length of the road that’s being studied, engineer Bryan Smith of Barry Isett & Associates told council.

“The bigger studies are in the townships where you’re talking about miles of road,” he said.

The engineering studies look at things like the turning movements of vehicles in order to determine the feasibility of allowing them to travel on certain roads.

Shupp noted that once one of these engineering studies is performed it never has to be redone.