For the second time in less than three months Hellertown Borough Council has a new member. 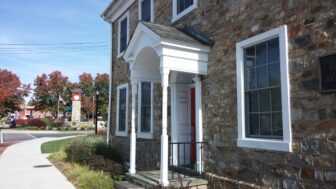 Andrew Hughes, who was a candidate for the vacancy created when councilman Herb Payung Jr. resigned his seat over the summer, was appointed by a vote of 6-0 Monday night to fill a vacancy created by the recent resignation of councilman Kevin Lott.

Council had the option to advertise the vacancy or appoint someone without doing so.

Lott–who was elected last year–resigned from borough council upon his appointment to Northampton County Council last month, and council officially accepted his resignation Monday “with regret.”

Since Hughes was considered a qualified “runner up” candidate when former borough councilman Mike McKenna was appointed to fill Payung’s vacancy in August, council members decided they would appoint him in lieu of advertising another vacancy.

However, as Hughes in August agreed to fill a vacancy on the borough’s zoning hearing board, his appointment to council has reopened the ZHB vacancy.

The zoning hearing board has a scheduled meeting in December–its first in more than a year–zoning and codes enforcement officer Kris Russo noted.

Hughes is scheduled to be sworn in as a councilman at the next borough council meeting, which will be held Monday, Nov. 19 at 7 p.m. at Hellertown Borough Hall.

He is employed as a Vulnerability Management Engineering Lead with New York Life Insurance Company and works in New Jersey.

Hughes previously told Saucon Source that he and his wife Sonya moved from Berks County to Hellertown nearly two years ago because of its location–which was closer to his wife’s job–and its affordability, which allowed them to comfortably downsize.

“What we found beyond that is a tremendous community which we want to call home for a long time,” he said. “Given our investment in our home (not done yet) and loving what we have found, we both want to become more vested and contribute to making our new home of Hellertown a great place for everyone to live.”