Pennsylvania State Police are asking for the public’s help with solving a chilling mystery that’s about as cold–literally–as cold cases come.

In January 1977, the body of a young man who has never been identified was found frozen in a cave just below The Pinnacle, off the Appalachian Trail in Albany Township, Berks County.

The 1,634-foot peak and its scenic outlook are located several miles west of Kempton (approximately 25 miles west of Allentown) in a corner of the county that borders both Schuylkill and Lehigh counties.

The Pinnacle today is noted for being a popular regional hiking destination, for the scenic views it affords of Berks County, the Lehigh Valley and beyond. 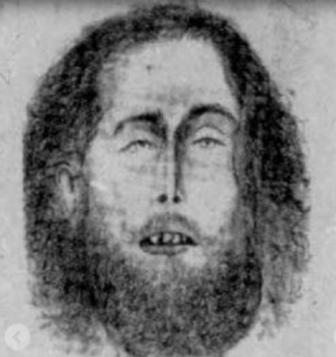 In 1977 state police released this artist’s rendering of a man who was found deceased in a cave in Berks County. He has never been identified.

More than 40 years ago in mid-winter it was likely a desolate place.

That was when two hikers discovered the man’s body in the cave on Jan. 16, 1977, Pennsylvania Crime Stoppers said in a post published on their Crimewatch site Wednesday.

According to a Jan. 16, 1977 article published in The Reading Eagle authorities included with the post, there were no obvious signs of foul play observed and police at the time believed “the man could have succumbed due to the cold weather.”

January 1977 was and remains one of the coldest months in eastern Pennsylvania since weather record-keeping began.

The article said an autopsy would be conducted in an effort to determine the man’s cause of death, but whether or not there were any conclusive findings is unknown.

What the man was doing in the area at that time of year is also a mystery, as he had no hiking gear with him, although authorities speculated at the time that it could have been left outside the cave and covered by snow which had fallen.

The man is described by police as white and 25 to 35 years old, with blue eyes and reddish long and curly hair. At the time of his death he had a full beard and a T-shaped scar on the left side of his chin, and he was wearing or had in his possession the following items:

The man stood five feet 10 inches to five feet 11 inches tall and weight 155 pounds at the time of his death.

Police said he was also wearing a 14 karat white gold ring inset with a blue stone, and his pockets contained a comb, pen, pencil, matches and $1.78.

Authorities noted that the cave where the man was found is only accessible by foot, meaning someone may have seen him hiking there.

The trails that lead to the Pinnacle are accessible via Reservoir Road, which intersects with Mountain Road off Rt. 143.

Anyone with information about the case is asked to contact Tpr. Womer with the Pennsylvania State Police at Reading by calling 610-378-4454. Tipsters can also call Pennsylvania Crime Stoppers’ toll-free tip line: 1-800-4PA-TIPS (8477). All callers remain anonymous and may be eligible for a cash reward.

It is possible additional information about the man may be released in the future, as Channel 69 News reported Wednesday that authorities Monday exhumed his body from a potter’s field in Cumru Township, Berks County.