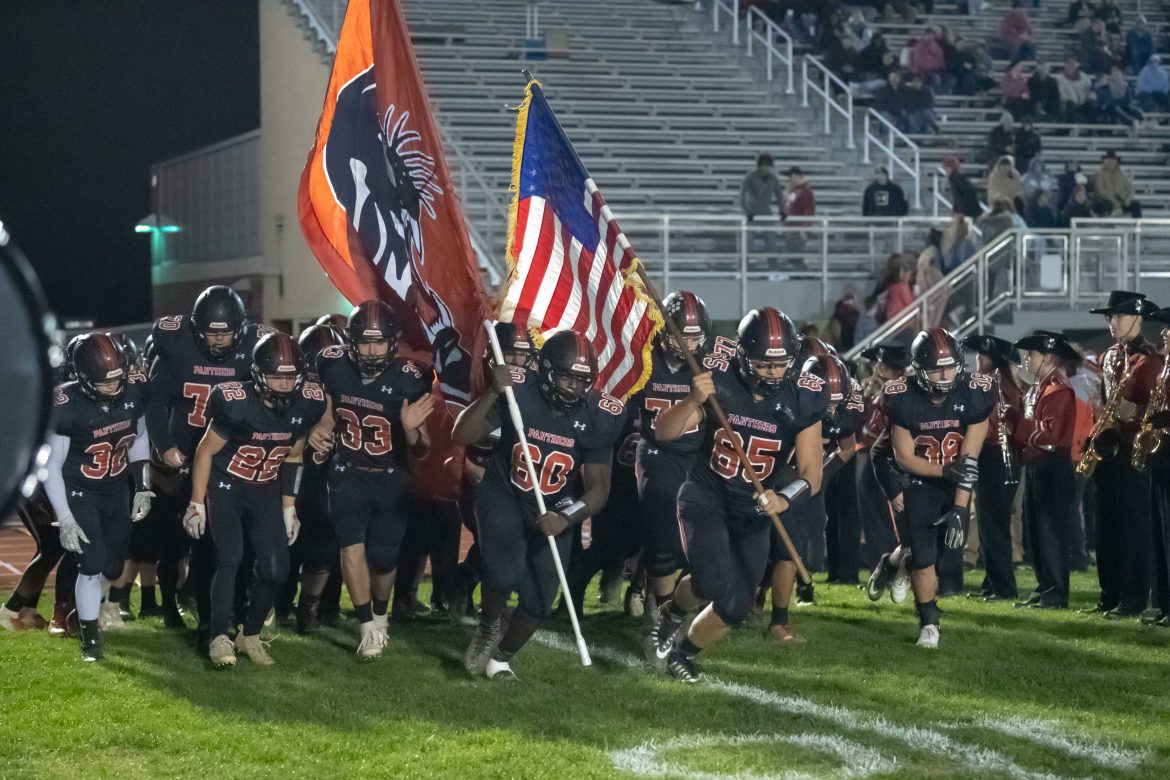 The Panthers will take the field in a special prime time, Thursday night clash with the Salisbury Falcons.

Hey! Panther Nation, are you ready for some THURSDAY NIGHT football? Saucon Valley (2-1) will fire up the hometown lights at Montford E. Illick Stadium for a Thursday night special against the Salisbury Falcons (2-1).  Salisbury owns wins over Pen Argyl (25-16) and Wilson (27-24 OT).  Their only loss comes to preseason favorite Northwestern Lehigh (38-17).  After losing their opener to Southern Lehigh (45-13), Saucon Valley has bounced back with victories over Pen Argyl (24-7) and Palmerton (35-14).

It is not very often that Pennsylvania high school football is played on a Thursday night, but in a new venture initiated by D11sports.com in conjunction with St. Luke’s Sports Medicine, viewers all over the world will have the opportunity to tune-in for some Lehigh Valley football via an internet broadcast offered by D11sports.  So, Saucon Valley alumni living out of the area have the opportunity to watch some hometown football live.  D11Sports plans to carry a total of ten high school football games throughout the 2019 season.

“The game will be broadcast by Al DiCarlo and Matt Evancho and will be joined by Saucon Valley High School student reporters Grace Albano, Megan Kane and Nick Bortz.”, said Panther Director of Athletics Bob Frey.  “D11Sports is an initiative to integrate journalism and broadcasting into the schools so high school students interested in that field can gain experience.”

So, let’s get to it.  Here is your Thursday Night Special Panther Pregame Focus!  This Colonial League matchup between the Panthers and Falcons definitely has  some of the key ingredients for an edge-of-your-seat classic.

Expect to see a blitzing Salisbury team bringing a lot of pressure from their 3-5 and 4-4 defense. Like so many other Panther opponents, expect the Falcon’s scheme against Saucon to be run heavy.  With eight and maybe nine defenders in the box, Salisbury will take their chances and challenge the Panthers to throw.  The question is, however, will nine defenders be enough to stop the potent Panther rushing attack?  Salisbury doesn’t have a whole lot of size in the trenches and the Panthers are very determined maulers.

The Panther ground attack is led by sophomore Damian Garcia. Garcia, who measures 5’10”, 165, has proven to be an explosive, breakaway threat.  He averages 9.9 yards per carry rushing 38 times for 377 yards.  Garcia has scored five touchdowns.  Three of his TD’s are from fifty yards out or more.

Chris Mann (#28) from his fullback position has proven to be an offensive weapon for the Panthers as well.  Mann is a junior and has rushed 19 times for 234 yards and a touchdown.  He averages an impressive 12.3 yards per carry. Mann is a solid 5’9″, 195 and usually makes his living as a lead-blocker for Garcia.

Also earning carries in the backfield is newcomer Braydyn Lugardo (#20).  Lugardo, a senior, was dealing with an upper-body injury and was finally cleared for play a few weeks ago.  Last week against Palmerton, Lugardo got a taste of high school football action and shined.  He carried the ball six times and bulled his way for a productive 32 yards.  Lugardo, who is a bowling ball of a man is listed at a solid 5’6″, 195. He has the quickness of a tailback and the power of a fullback.  Lugardo is fun to watch play.

Sophomore Dante Mahaffey (#12) will, once again, lead the Panthers from his quarterback position.  He is dual threat and in his short career, has thrown for 1,069 yards and rushed for 467.  Mahaffey already has 20 career TD’s connected to his name.

When Mahaffey drops back to throw this week, the ball will likely end up in the hands of Chris Orlemann (#3), Ty Csencsits (#11) or Anthony Orlemann (#9).  Chris Orlemann is a senior, while his younger brother Anthony and Csencsits are sophomores. Rotating into the starting lineup will be freshman Alex Magnotta (#8).  Magnotta leads the run-heavy Panthers with 4 catches for 36 yards and a TD.  All four of these Panther receivers have excellent hands.

Paving the way for the Saucon Valley ground attack are the 2019 Hogs.  Seniors Nick Warnke (#77) and Evan Deily (#65) are the top hogs.  Warnke who trimmed down to 245 pounds from 285 is off to a great start this season.  Deily gets the first start of his senior season after being sidelined with an upper body injury.  He is chomping at the bit and ready to go.  Joining the seniors will be three-year starter David Osman (#60). Osman has played a lot of football for the Panthers and has played well.  In addition, Eli Deily (#76) and Cody Swinney (#56) are solid up front with a little bit of nastiness and size. Deily measures a head-turning 6’4″, 290.

When the Falcons have the ball…..

Salisbury runs a hybrid Wing-T, shotgun-spread offense that is based on speed.  Expect to see the Falcons attack the perimeter using their quickness and elusiveness using short passes and jet-sweeps.  They are also intent in taking frequent shots and throwing the ball down the field.  Salisbury’s gameplan schemes to go deep hoping to take advantage of their impressive speed.

The Falcons are overall smallish up front and have shown that they will sling the ball more than 50% of the time.  The Falcons may be light in the trenches, but their athleticism starts with Tim Buda (#25) and Chad Parton (#8).  Buda is a senior playmaker listed at 5’9″, 16o.  This year Buda has carried 22 times for 113 yards and a TD.  He also has 10 receptions for 82 yards and a TD. Last year, Buda scorched the Panthers in a losing effort for 141 yards on the ground and through the air.  Buda has the speed to fly.  Look for the Falcons to try to get Buda the ball in space and make the Panther tacklers miss.

Parton, a junior listed at 5’10”, 170, can also do it all.  He is a little more physical than Buda but can definitely catch and run with the best of them.  In three games so far this season Parton has 15 catches for 314 yards and 5 TD’s. Salisbury certainly has the talent to create explosive plays.

The key matchup appears to be the speed and athleticism of the Salisbury’s skilled players against the ability of the Panthers to tackle and keep the Falcons bottled-up. In addition, it seems as if the Panthers will have a tremendous advantage with their defensive line against Salisbury’s offensive line.  It could be a long night for the Falcons if they cannot protect.  However, if Salisbury’s quarterback, Quintin Stephens (#20) gets time to connect with Parton and Buda, it may be a long night for the Panther secondary.

As long as Saucon Valley plays a clean game, a solid defensive effort will go a long way in helping to secure a Panther victory.  Excessive Panther penalties and turnovers, however, may allow the Falcons to create and ride the momentum.  Saucon Valley must keep Salisbury’s big-plays to a minimum.

Once again, this will be no easy task for the Panthers.  The Falcons have the offensive firepower to score a bunch of points.  This contest is far from a “gimme”.  Salisbury has a few dangerous players that play real fast and are elusive. If the Panthers cannot limit their mistakes and the defense doesn’t tackle well, this game evolve into a shootout and come down to the wire.