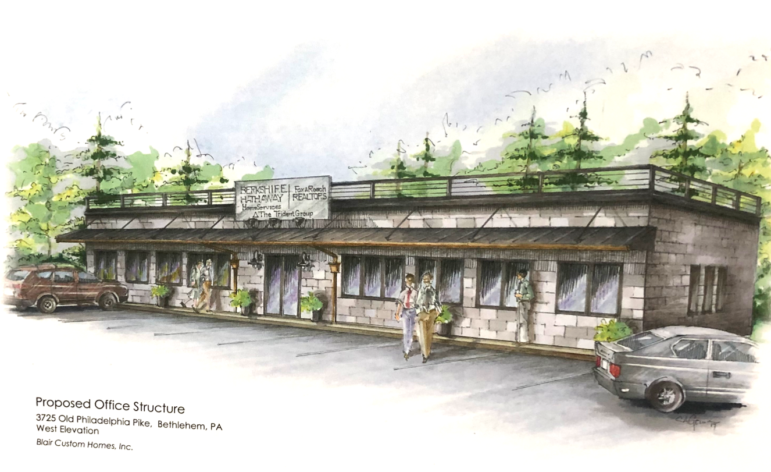 An artist’s rendering shows what one of two office buildings proposed by developer John Blair for property he owns along Rt. 378 in Lower Saucon Township might look like.

A Lower Saucon Township developer presented plans to township council Wednesday for two office buildings he hopes to build on approximately two acres of land he owns between Rt. 378 and Old Philadelphia Pike.

John Blair said he’s owned one of the two parcels on which he would build the offices for approximately 15 years.

As it is landlocked, it was only with his more recent purchase of an adjacent lot that he was able to develop a preliminary development proposal for both parcels.

That plan proposes access to both buildings via a shared driveway off Old Philadelphia Pike.

Blair said the Pennsylvania Department of Transportation won’t allow driveway access to the properties from Rt. 378 for safety reasons.

A traffic light at the Rt. 378 entrance to the Saucon Square shopping center is nearby, but Blair said the land on the west side of the highway opposite the entrance is controlled by a billboard company and would be difficult to obtain or negotiate access from.

In addition to access issues, another challenge he said he hopes to overcome involves a narrow culvert that cuts across the property. Blair said the depression has a designated riparian buffer that prohibits development for 100 feet on either side of it.

According to Blair the culvert is manmade and dry most of the year, which he said is why the land on either side of it can be built upon without causing runoff issues downhill.

One bonus of developing 3725 Old Philadelphia Pike–particularly for nearby residents–would be the cleanup of what Blair said amounts to an abandoned dumping ground.

Large rusty pieces of metal and other discarded rubbish are both an eyesore and a potential contaminant of groundwater in the area, he said.

“I want to be a good neighbor,” Blair told Saucon Source in an interview. “I think we’re going to make this (property) 1,000 percent better.”

Blair said he already has a local real estate company lined up as a tenant for the larger of the two buildings.

However, the tenancy is contingent upon him winning the approvals he needs in order to begin construction from both the township zoning hearing board and township council.

He needs to obtain variances to create access to the properties as well as satisfy any lingering concerns from officials about stormwater runoff in the area.

Blair said the development will improve the look of the Rt. 378 corridor in Lower Saucon Township, which some residents have recently argued is becoming blighted due to dilapidated buildings and chronic retail vacancies in the shopping center.

Lower Saucon Township’s tax base will also benefit from the commercial construction, he said.

Blair’s proposal is slated to be considered by the township’s zoning hearing board at a meeting on Monday, Oct. 21 at 7 p.m. at Lower Saucon Town Hall.