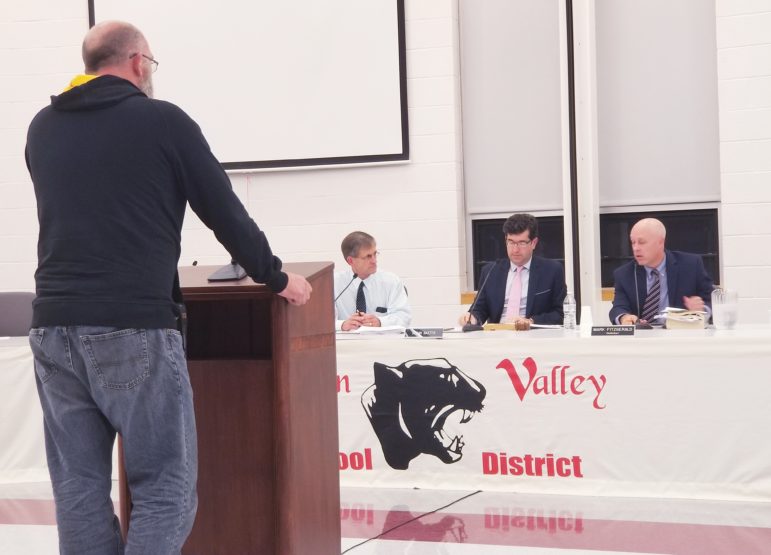 Saucon Valley Middle School parent David Clarke of Hellertown addresses members of the school board at Tuesday’s meeting. Clarke told them the school’s response to a situation in which his daughter has allegedly been bullied by another student is ‘unacceptable.’

The parent of a Saucon Valley Middle School student said the manner in which school administrators have handled bullying he says his daughter’s been subjected to since the beginning of the school year is “unacceptable” at Tuesday night’s school board meeting.

“She’s been bullied by one particular child,” said David Clarke of Hellertown. “I’ve (spoken to the principal) many times. It’s only gotten worse.”

Clarke also claimed that administrators failed to tell Lower Saucon Township Police about an incident two weeks ago in which he said the alleged bully made a “racial terroristic threat” and used the ‘n-word’ on a school bus.

“A boy threatened someone’s life; threatened to shoot them in the head,” he said, adding that the school in his opinion only reported that incident to the police after he told them he was alerting both local media and the NAACP to it.

Clarke said the police department has since opened an investigation into those allegations, which if true are not the first at Saucon Valley to involve bullying and the use of a racial epithet.

However, the police’s involvement isn’t helping his daughter, who he said is currently forced to see the student who’s allegedly bullied her on the school bus each day.

Although the Saucon Valley Middle School administration has mandated that the student sit apart from Clarke’s child, he said “she feels threatened by his voice and now she has to be terrorized just walking past him.”

To add insult to injury, according to Clarke, the school has offered counseling to the boy but has not extended the same offer to his daughter.

“Up until my daughter was being bullied…she absolutely loved the school,” Clarke told Saucon Source Monday. However, as a result of the harassment she has endured he said her grades are slipping and her education is now at risk.

“This is unacceptable,” he told school officials at the meeting Tuesday.

Saucon Valley School District superintendent Dr. Craig Butler told Clarke the investigation into the allegations of bullying and threats is ongoing and that the district is “following policy” as it does its best to “corroborate statements that were made.”

“We are concerned as well,” Butler said. “Please know that your daughter’s safety and that of all students is of utmost concern to us.”

Due to privacy laws that restrict what school officials can say in these cases in public, solicitor Mark Fitzgerald urged the board and Butler to be “circumspect” in commenting on the allegations. He added that he would follow up with Butler to discuss the matter.

Those words didn’t seem to reassure Clarke, who said that when one of his other children was bullied at the elementary school level the issue was dealt with swiftly and decisively.

“She handled it,” he said. “Middle school was a different story.”

The next Saucon Valley School Board meeting will be held Tuesday, Nov. 12 at 7 p.m. in the Saucon Valley High School Audion room.