If you’ve been to a Saucon Valley High School football game over the past decade then chances are you’ve seen Amy Virden, and witnessed the positive influence she has on the students whose health she helps safeguard.

Virden has been an athletic trainer with the Saucon Valley School District since 2009, but her path to Saucon Valley has been a journey, she explained in an interview with Saucon Source.

A native of West Virginia, after attending college in Ohio–where she earned a Bachelor’s degree in sports medicine–Virden first came to the Lehigh Valley to work as an assistant athletic trainer in the Catasauqua Area School District. Following a three-year stint in that role, she decided to go back to college to earn her Master’s degree in athletic training.

She attended Ohio University for graduate school while also working as an athletic trainer for the school and remained in the Buckeye State after earning her degree to work as a trainer at Heidelberg University.

Virden recalled that she then initiated a brief career change, moving to Chicago in 2008 to pursue a financial advising career. Because of the state of the economy at the time, she quickly realized that employment opportunities for financial advisers were hard to come by.

She moved back to the Lehigh Valley in 2009 and found her home with the Saucon Valley School District. It was a decision Virden said she hasn’t regretted.

“I absolutely love it here,” she said. “I love this small town atmosphere. I grew up in a small town.” 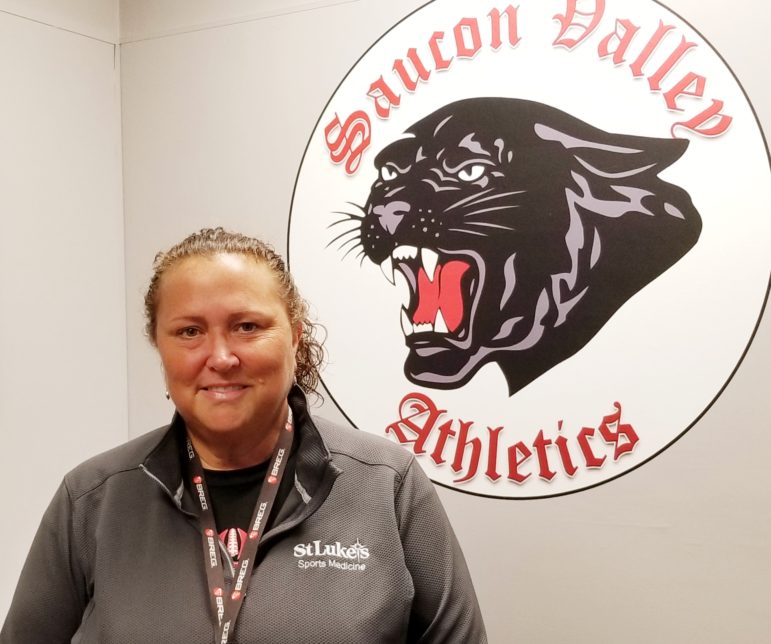 Amy Virden,  MS, ATC, CSCS, who is employed by St. Luke’s University Health Network, has been the athletic trainer for the Saucon Valley football program since 2009.

Virden arrives at the high school just after lunch on a typical day. She helps get the fields ready for practices and checks for any hazards.

After school is treatment and rehab time for injured student-athletes. Virden uses this time to help prepare the athletes for practice.

Once practice is underway, the athletic trainers sit-in and monitor the athletes.

“It’s kind of a hang out and wait situation,” Virden said.

While she is responsible for the health and well-being of the district’s student athletes, she also serves as an integral member of the Panther athletic community.

She is thought of as part of the team itself, offering nutritional advice to the athletes and working in conjunction with strength coaches on exercises meant to help prevent injuries.

“I’ve certainly been called their second mother,” she admitted.

Virden said the closeness that comes with training has allowed her to maintain friendships with former Saucon Valley students who’ve moved on to the next chapter in their lives, even attending some of their college games.

One player who falls into that category, whose journey from a torn ACL back to health was a particularly emotional one–in large part because of the timing of his injury–was Saucon Valley’s Dino Zaharakis ’17.

“He worked hard. It all worked out,” she remembered with a smile.

No matter what she’s doing, the physical and emotional health and well-being of each of her players is something to which Virden is professionally and personally dedicated.

Weather conditions can often pose a challenge when it comes to player health, which is why she carries equipment that can be used to measure the heat index during the warmer months.

“We can kind of fine-tune practices based on the weather,” she said.

Saucon Valley Athletic Director Bob Frey spoke highly of the job done by Amy and all of the trainers at the high school.

“It’s outstanding. They take care of them like they’re their own kids,” Frey said. “You can’t really put a price on a high standard of care.”

For Virden, helping Saucon’s polite and respectful student-athletes is worth every ounce of her effort.

“I love what I do. The nuts and bolts are treating injuries, but in the bigger sense, they (athletic trainers) allow kids to participate in sports, and sports are adding meaning to their lives,” Virden said.

Noting that championships are wonderful–but not everything–she said it’s the life lessons taught and character built by high school athletics that move her.

“What I really like to see is when you get a kid who might have been dealt a bad hand in life, and sports lifts them out of it,” she explained. “They have to do things for the benefit of the group. It teaches them that success comes after working hard.”

Virden, like all trainers in the district, is an employee of Bethlehem-based St. Luke’s University Health Network. Including Saucon Valley, St. Luke’s provides more than 100 athletic trainers to 50 schools throughout the region.