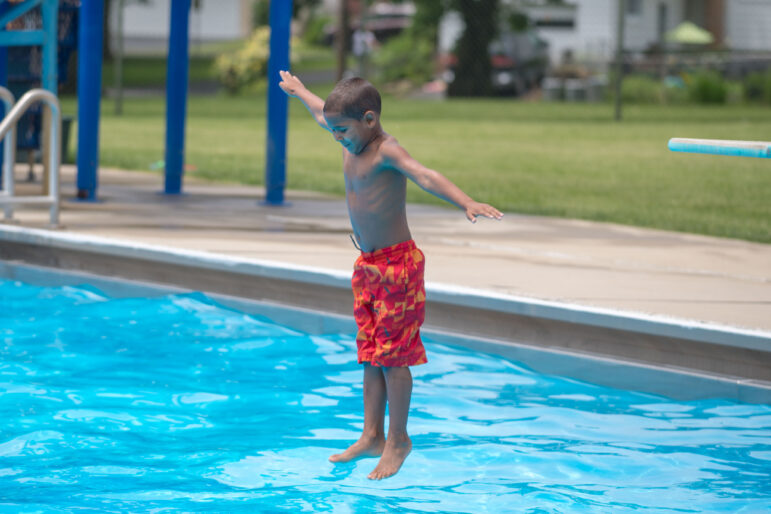 A young boy jumps into the turquoise waters of the Hellertown Pool on a hot day. The pool has only closed a few times during its 80-year history, and is a popular summertime oasis for many local residents. Borough council decided Monday that the pool should remain closed this summer due to concerns associated with the coronavirus pandemic. (FILE PHOTO)

Gov. Tom Wolf announced that camps and public pools may open in the state’s yellow and green counties this summer, but the news may have come too late to save some programs that have already decided to shut down because of the coronavirus pandemic.

Wolf said in a news release that the clarifications and guidance within a four-page Pennsylvania Department of Health FAQ were released as many parents are trying “to secure child care options this summer.”

“We understand the need to secure child care options as parents and caregivers return to work across the state, and for providers of these programs to understand how they may operate,” he said. “We hope that this guidance helps everyone in need of viable options for their children’s care and recreation this summer and eliminates some of the stress and worry associated with the COVID-19 pandemic and how it is affecting our everyday lives.”

One noteworthy piece of information within the guidance concerns municipal swimming pools, which it was previously unclear could operate during the yellow phase of Wolf’s reopening plan, since public gatherings of 25 or more people are prohibited during it. 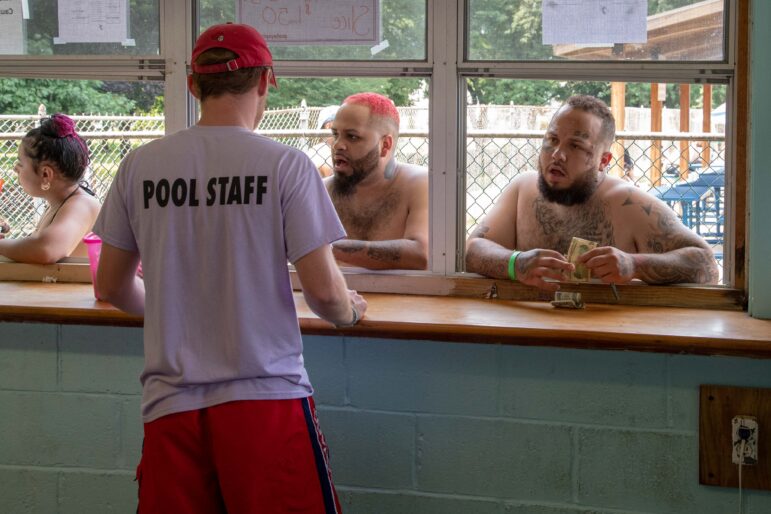 The Hellertown Pool snack stand is a popular afternoon stop during almost any pool visit, as swimmers typically work up an appetite. Under CDC guidance for pools during the coronavirus pandemic it is unclear whether food sales could continue, or if so, how they would be handled. (FILE PHOTO)

“Public bathing places and other outdoor community pools are permitted to operate in counties in the yellow and green phases of the governor’s phased-in reopening plan, provided they follow CDC guidance for aquatic venues and the governor’s Guidance for Businesses Permitted to Operate During the COVID-19 Disaster Emergency,” the FAQ said.

Although the CDC guidance was referenced during a Hellertown Borough Council meeting Monday, council members and staff were apparently unaware of the fact that pools would be permitted to operate during the yellow phase.

Council president Tom Rieger said the borough was basing its decisions about whether or not to reopen the pool at least in part on guidance from the Pennsylvania Recreation & Park Society which recommends that public pools not be reopened until the communities they serve are within the final green phase.

On Monday it was also unknown when Northampton County would enter the yellow phase of the reopening.

It wasn’t until Friday that Wolf announced that Northampton and nine other counties will transition from red to yellow by Friday, June 5, which is the day before the Hellertown Pool was originally scheduled to open.

Council decided earlier this month that the pool would remain closed this summer because of the coronavirus pandemic; a decision that was unpopular with some community members, who asked that it be reconsidered.

Many requested that access to the pool be restricted to borough and Lower Saucon Township residents.

Pool manager Ed Kolosky presented a pro-pool opening petition with nearly 500 signatures on it to council Monday and outlined safety precautions he said pool staff would take if permitted to open.

In declining to revisit the issue, council members said they were concerned about public safety, liability and other issues, such as the financial risk associated with opening a pool with built-in limits on attendance.

Other Lehigh Valley municipalities such as Bethlehem and Allentown this week cited similar concerns in announcing that their swimming pools won’t be opening in 2020.

Hellertown borough council did agree to work with Kolosky to try to open the pool if state regulations that make it impossible to operate during the red phase were removed and the general climate for public recreation improved.

That is what appears to be happening, according to the FAQ released Friday, which also indicated that facilities such as public playgrounds “may be used by child care providers and summer programs offered in counties in the yellow or green phase.”

“Summer programs that provide child care and enrichment and recreational activities for
children and youth are permitted to operate without a waiver in counties in the yellow and green phases of the governor’s phased-in reopening plan, provided they follow the Centers for Disease Control and Prevention (CDC) guidance for Youth and Summer Camps and the CDC Supplemental Guidance for Child Care Programs That Remain Open,” the FAQ said.

Staff working in child care and summer programs must wear cloth face coverings however children participating in them aren’t required to, the health department said.

“Face coverings are still recommended by the CDC, especially for older youth, when feasible, particularly in indoor or crowded locations,” it added.

Under Kolosky’s proposal, face coverings would be required at the pool unless someone was swimming or on their towel on the grass.

The CDC guidance stresses that face masks are not to be worn in the water, since they can be difficult to breathe through once they become saturated.

The CDC also recommends that pools have trained backup staff who are capable of working in the event that regular staff become ill.

The guidance doesn’t include information about how or when to limit attendance at pools but says group events, gatherings or meetings both in and out of the water should be avoided “if social distancing of at least six feet between people who don’t live together cannot be maintained.” Noted exceptions to the social distancing guidelines include providing first aid or CPR, performing rescues and evacuating a facility.

None of the CDC recommendations are mandated, but rather, are offered as “considerations” for pool operators.