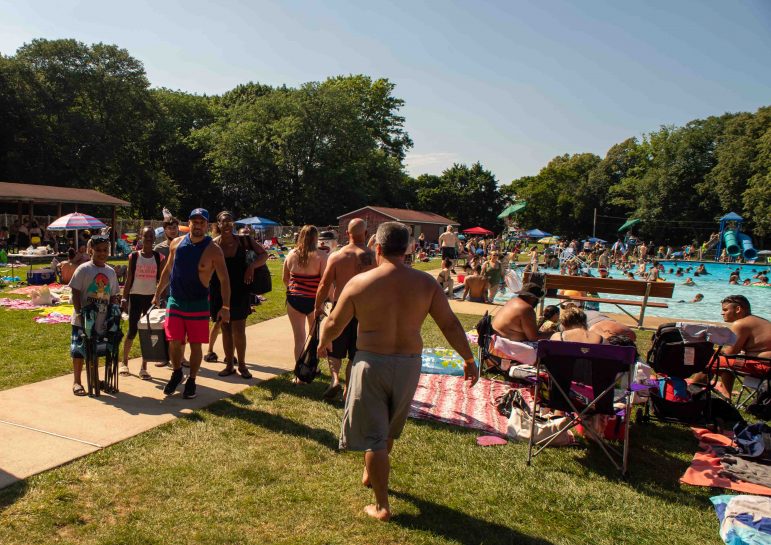 Pictured: July 4, 2019 at the Hellertown Pool. On hot summer days the iconic pool can attract as many as a thousand people, many of whom congregate on the grassy areas around it. Under current state mandates, that would not be possible due to a requirement that individuals maintain a social distance of at least six feet when out in public. (FILE PHOTO)

Due to the coronavirus pandemic it’s not clear if any public pools in the area will open this summer, however hundreds of Hellertown area residents are demanding that an exception be made for the borough’s swimming pool, even though borough council has already said it will remain closed.

Rori Prushinksi of Hellertown this week launched the Change.org petition Operation Open Hellertown Pool This Summer and as of Thursday night it had received more than 220 signatures.

“Mr. Kolosky needs our help!” Prushinski proclaimed, referring to pool manager Ed Kolosky. “If you live in Hellertown Borough or Lower Saucon Township please sign this petition. Mr. K is going to a meeting on Monday and if he could walk into it with a petition full of pool residents it could perhaps help to keep the conversations and negotiations going instead of rushing to close the pool all season.”

Among the challenges the borough would likely face if it attempted to open the pool are:

It is possible additional staff would be needed at the pool, since lifeguards would not be able to watch the water and monitor the behavior of guests on the grass at the same time.

Due to the pandemic, many frontline workers are also now receiving hazard pay of $2 or more an hour. However, any pay increase combined with the other costs associated with operating a pool during a pandemic would almost certainly put the Hellertown Pool into the red, since historically it manages to eek out a small profit only in good seasons.

Prushinski’s petition doesn’t address any of the potential challenges Kolosky and borough officials would almost certainly face if they attempt to do what she and others are asking, however some suggestions have been shared in comments posted by petition signers. 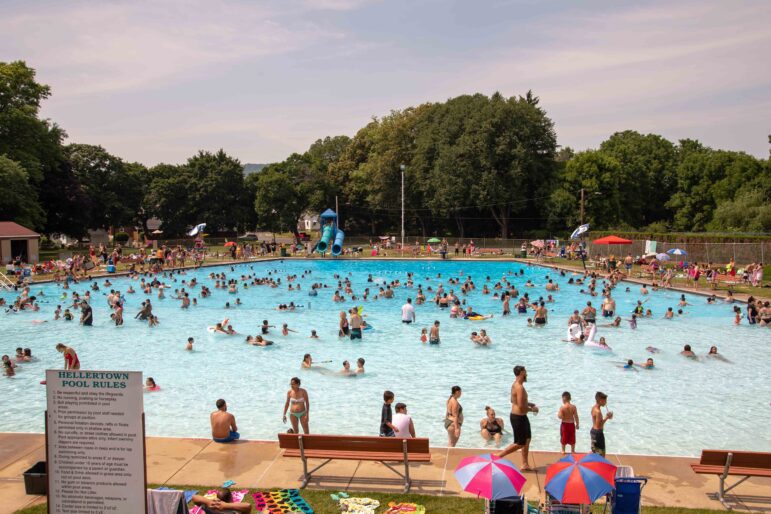 On hot summer days the Hellertown Pool’s famously turquoise waters can draw up to a thousand people. If the pool were to open with social distancing requirements in place, it is unclear how they would be enforced, both in and out of the water. (FILE PHOTO)

“Open this pool!” demanded Jason Prushinski, who said the pool should “have one employee specifically designated for the bathroom sanitation.”

Prushinski also claimed in his comment that “the virus is killed within 1.5 minutes in sunlight…without chemicals to help,” without providing any scientific evidence to support his suppositions.

Since the novel coronavirus wasn’t discovered until December 2019, there is no historical data for combatting it in the summertime.

“Let’s think about it and figure it out as things change daily,” Jason Prushinksi recommended.

Other signers also requested that the pool be opened only for the use of borough and Lower Saucon Township residents this summer, without offering suggestions for recouping the significant revenue that would be lost by closing it to out-of-town visitors.

“Our community needs the pool open to have a safe place is to cool off plus our residents pay a lot of taxes,” said Rachel Heiber, on why she chose to sign the petition.

“It needs to be open,” commented Jillian Washburn. “As if you haven’t (put) these people through enough. Now you’ll ruin their summer.”

Another signer called borough officials “bafoons” for deciding to close it.

“The virus is killed by sunlight and chlorine you bafoons!” commented Lisa Cook. “A swimming pool is probably one of the safest places to congregate.”

The word is correctly spelled “buffoon” and is a noun defined by Merriam-Webster as “a clown” or “a stupid person.”

Another signer of the petition said closing the pool involves an infringement of his rights, since it relates to orders put into place by Gov. Tom Wolf he said are “unconstitutional.”

“The pool should be opened,” said Frank Nickles. “The governor has overstepped his authority and infringed on our constitutional rights in closing the state for too long.”