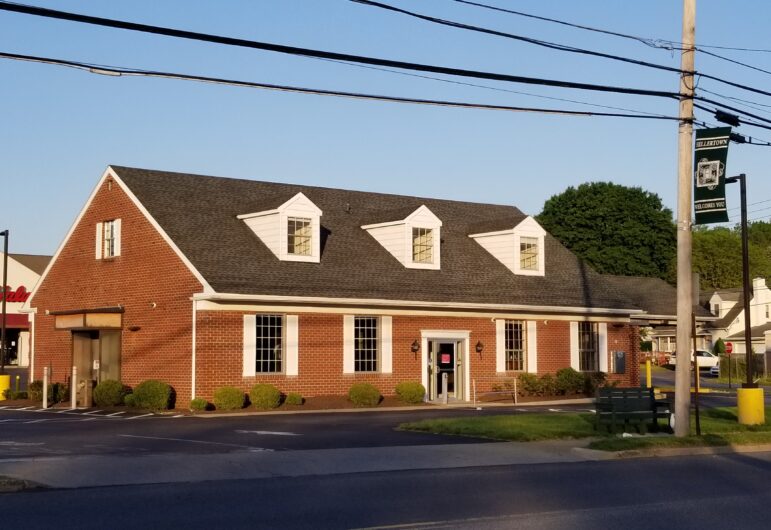 A former Bank of America at Main Street and Polk Valley Road in Hellertown is set to become a Starbucks with a drive-thru, after concerns about traffic flow around the building as well as into and out of its parking lot were addressed. (FILE PHOTO)

If you’re more worried about a line of cars in the drive-thru of a planned Starbucks in Hellertown backing onto Main Street than where your next pumpkin spice oatmilk latte is coming from, the latest engineering plans for the project may put a smile on your face.

Starbucks won conditional approval for opening their store at Main Street and Polk Valley Road from the borough’s planning commission earlier this week, after committing to traffic improvements that will be made to improve safety in the immediate area.

One of those improvements will be a holding lane that can accommodate up to 18 “stacked” vehicles, Hellertown zoning and codes enforcement officer Kris Russo said.

An engineering firm’s site plan for the Starbucks (below) shows the holding lane feeding cars to the drive-thru, which wraps around the south and east sides of the building.

“Cars will be stacked on site to alleviate concerns for the possibility of cars stacked out onto Main Street and traffic around the site,” Russo said in an email Friday. 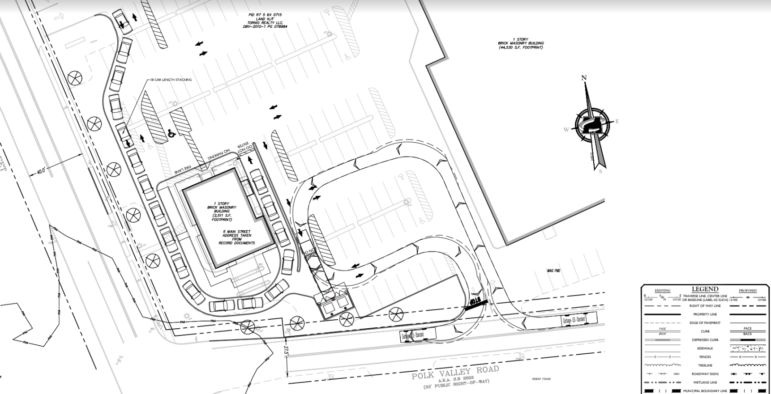 An engineering site plan for the Starbucks at Main Street and Polk Valley Road in Hellertown depicts the stacking lane for the drive-thru which will hold up to 18 cars. Cars stacking in a line that overflows into the street was a particular concern because something similar sometimes happens at another coffee shop drive-thru on Main Street in the borough.

He said traffic flow around the former bank building will improve once the shopping center driveway along Polk Valley Road is more defined, which is another improvement Starbucks plans to make in order to satisfy both planners and PennDOT engineers.

“The curb line along Polk Valley Road will be more defined and the entrance to the shopping center will be up closer to the hardware store,” Russo explained, referring to the Saucon True Value in the Shoppes at Hellertown.

“Right now it’s just one big open parking lot and cars can come in and out at any location…there’s no curb or parking blocks,” he added. “These were two issues that PennDOT and the borough worked on to ease traffic concerns as well as stacking concerns in the drive-thru.”

Starbucks recently began work on the building, which included removing its former bank vault, but the major work was on hold pending an agreement by the company to make the changes that will improve traffic flow within the parking lot as well as into and out of it.

A representative for Starbucks reached earlier this month did not provide a timeline for the store’s opening.

A nearby Starbucks kiosk in the Giant food store at 1880 Leithsville Road will remain open after the standalone Starbucks opens for business. The kiosk is a licensed Starbucks retailer, while the store at 5 Main Street will be company-owned and operated.