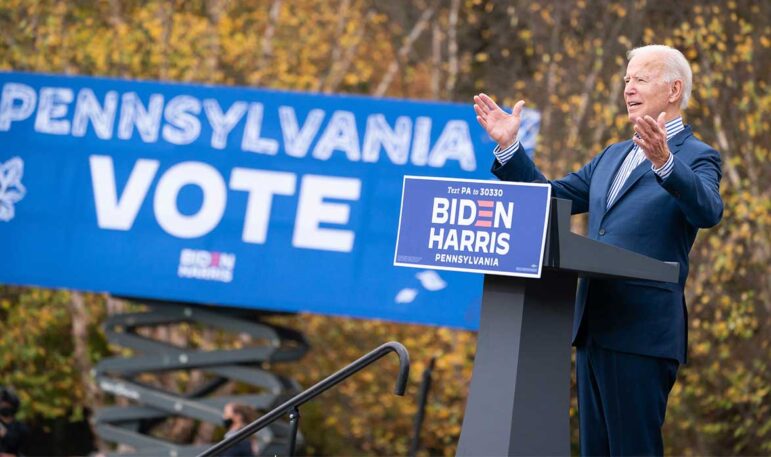 Democratic presidential candidate Joe Biden will make a final push to get out the vote in Pennsylvania Monday, according to his campaign. The former vice president is scheduled to “barnstorm” the state along with his wife Jill Biden, his running mate U.S. Sen. Kamala Harris and Harris’s husband, Doug Emhoff.

If you’re hoping to see Democratic presidential candidate Joe Biden or his running mate U.S. Sen. Kamala Harris in-person before Election Day, you may still have a chance on Monday.

The Biden campaign announced Friday that the former vice president, his wife Jill Biden, Harris and her husband Doug Emhoff will “barnstorm Pennsylvania and fan out across all four corners of the state” Nov. 2.

“Vice President Biden, Dr. Biden, Sen. Harris and Mr. Emhoff will hold events in the Keystone State to get out the vote while also discussing how to bring Americans together to address the crises facing the country and win the battle for the soul of the nation,” the Biden campaign’s news release said.

Specific times and locations for the one-day barnstorming tour have not yet been announced, however event information can be found on Biden’s campaign site, which is being regularly updated.

President Donald Trump paid a campaign visit to the Lehigh Valley earlier this week when he held a rally at a business in Hanover Township, Northampton County, which is considered a crucial bellwether in the battleground state of Pennsylvania.

In it, he frequently disparaged his opponent–a Scranton native–by questioning his mental acuity. He also attacked his foreign policy record, which he said makes him a bad fit for Pennsylvania.

Trump is scheduled to return to southeastern Pennsylvania Saturday with a rally at Reading Regional Airport in Berks County at 2:30 p.m.

The Reading rally was originally scheduled for 4 p.m., and it was unclear if a previously announced Bucks County visit scheduled for 1:30 p.m. Saturday was still on.

As of mid-afternoon Friday, there were no Bucks County events listed on Trump’s Oct. 31 schedule, which has been updated to include an 8 p.m. rally in Mountoursville, Lycoming County.

Rumors of an Upper Bucks visit began about a week ago, when there was talk of Trump holding a rally at Pennridge Airport in Perkasie on Monday. Instead, the president visited HoverTech International near Allentown, and the Bucks event was postponed till Halloween.

An official Trump campaign email sent Thursday listed a Saturday event in Bucks County, but no details about it, other than the time it was supposed to be held.

Biden has not visited the Lehigh Valley so far during his campaign.

However, due to the fact that millions of Pennsylvanians are voting by mail in this year’s election–in part because of the coronavirus pandemic–the results from the Keystone state may not be known on Election night.

Pennsylvania is one of just two battleground states in which the counting of mail-in ballots can’t begin until Election Day. Additionally, ballots that are postmarked Nov. 3 will be counted as long as they are received by Friday, Nov. 6,  the state has decided.

Two recent U.S. Supreme Court rulings have upheld the legality of counting mailed-in ballots that are received after Election Day in Pennsylvania, with a few caveats.

Those two factors in combination make it possible, if not probable, that identifying the winner of Pennsylvania’s 20 Electoral College delegates may take at least several days.