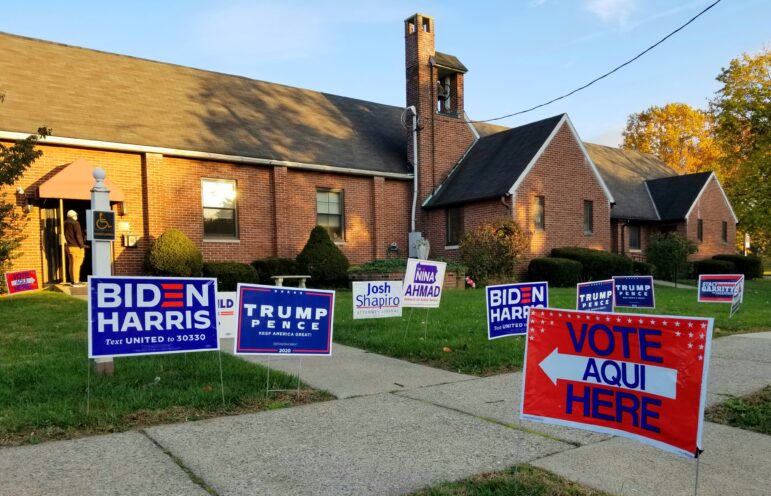 Signs for Republican and Democratic candidates line the sidewalk outside St. George’s Episcopal Church in Hellertown borough Tuesday. The church is the polling station for residents of the borough’s second ward, which narrowly went for Democratic U.S. presidential candidate Joe Biden according to unofficial Northampton County election results.

The final results of the 2020 presidential election remain unknown due to ballot counting that continues in several states that may ultimately decide the race, including Pennsylvania, Michigan and Nevada.

As of mid-afternoon Wednesday, the Associated Press was reporting that with approximately 84 percent of Pennsylvania’s votes counted, Trump was ahead of Biden in the state 52.9 to 46 percent.

Most of the votes in Northampton County had been counted as of early Wednesday.

According to unofficial results published by the county, Biden held a narrow lead over Trump of 747 votes out of 167,972 ballots cast. That equates to a percentage lead of just four tenths of a percent; approximately 49.5 percent to 49.1 percent.

Historically, this type of split has not been an uncommon unoccurrence, as voter registration in Hellertown borough is more heavily Democratic, while registration in the township favors Republicans. However in 2016, some Hellertown Democrats switched sides to vote for Republican Donald Trump, who narrowly won the borough as a whole.

According to the county’s unofficial tabulation of the votes from Hellertown, Biden captured a total of 1,648 votes (51.2 percent) to Trump’s 1,572 votes (48.8 percent), with Ward 1 supporting Trump while wards 2 and 3 abandoned the president for Biden. 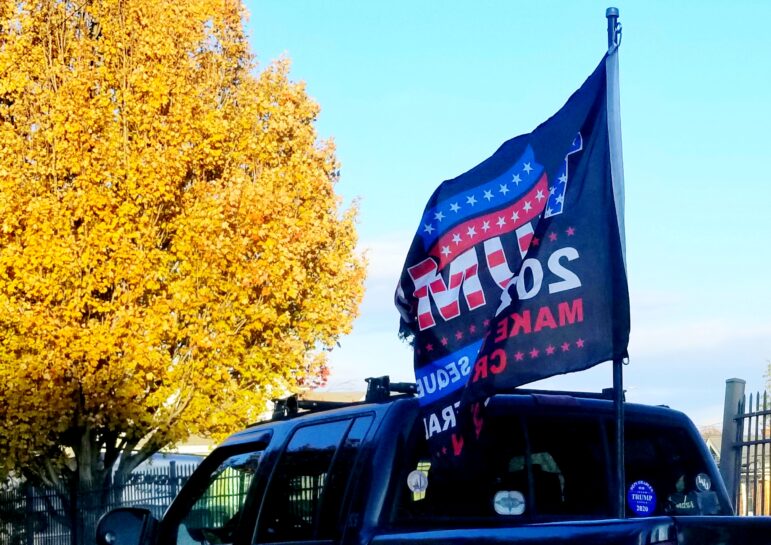 A pickup truck with a Trump 2020 flag attached to it is parked along Cherokee Street in Fountain Hill borough, Lehigh County, Tuesday. Lehigh County’s election results remained inconclusive throughout the day due to a large number of uncounted mail-in ballots officials were still tabulating.

While Biden appears to have flipped two of the borough’s wards, voters in the other precinct–Ward 1–appear to have increased in their level of support for Trump.

The unofficial county results show Trump beating Biden in Ward 1 by a larger margin than he held over the 2016 Democratic presidential candidate, Hillary Clinton.

In recent days, two local news organizations–the Morning Call and Lehigh Valley Live–published in-depth stories about the borough and its special significance for Democrats hoping to turn the election tide in Northampton County and around the nation as well as for Republicans who are hoping to continue a reddening trend that began in 2016.

Turnout in Hellertown borough and throughout Northampton County was described as heavy Tuesday, in spite of the fact that many residents of both the borough and county voted early by mailing their ballots or depositing them in county-owned drop boxes.

According to the unofficial county results, turnout county-wide exceeded 74 percent. 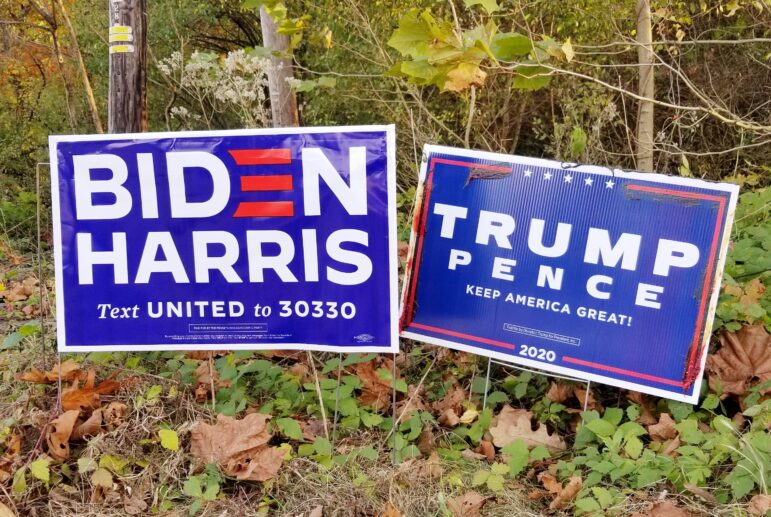 Signs for Democratic presidential candidates Joe Biden and Kamala Harris as well as Republican presidential candidates and incumbents Donald Trump and Mike Pence stand next to each other at the corner of Bingen and Friedensville roads in Lower Saucon Township. The busy, well-lit intersection was a popular place for putting up campaign signs all throughout the fall, when it sometimes seemed the signs had disappeared almost as quickly as they were placed there.

In Lower Saucon Township, where long lines were witnessed at some polling stations throughout the day, Trump prevailed but by a slimmer margin overall than he did in 2016.

After winning seven of the township’s eight districts four years ago, Trump won only four on Tuesday. Nevertheless, the combined votes from those districts were enough to give him the advantage overall, according to the county’s results for Lower Saucon Township:

As of Wednesday afternoon some provisional ballots remained to be counted in Northampton County.

Lehigh Valley Live reported on the uncounted provisionals–ballots used at polling places because an individual isn’t able to use a regular ballot–and quoted Northampton County GOP chairwoman Lee Snover as saying she believes the provisional ballots are “for Trump.”

No evidence for that claim was cited in the story.

Also uncounted are ballots that were postmarked before or on Election Day, that haven’t yet been received by the county elections office. In response to various legal challenges, the U.S. Supreme Court has twice ruled that Pennsylvania may count ballots received by Friday, Nov. 6 at 5 p.m., as long as they bear a postmark of Nov. 3 or earlier.

Northampton County is widely considered to be a bellwether for presidential elections, because its voters have chosen the winner of the presidency in all but three elections throughout the last century.

Not counting Tuesday’s election, that gives them a record of 88 percent accuracy.

Election results are not official until they are certified by the county, which happens after an official canvass that begins several days after the election is held.

Note: This is a developing story about election results. All results as of Wednesday are unofficial. This story may be updated as additional information becomes available.