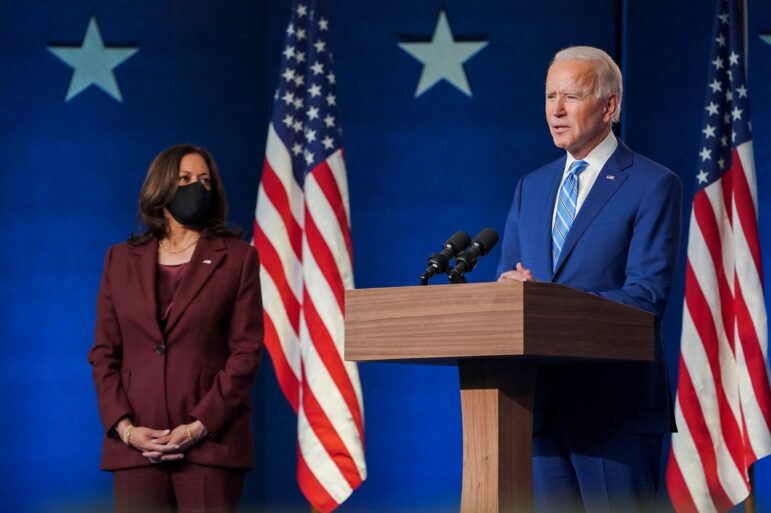 Democrat Joe Biden has been elected 46th president of the United States. After days of uncertainty, it was Pennsylvania’s 20 electoral votes that secured victory for Biden and his running mate, U.S. Sen. Kamala Harris (Calif.), on Saturday.

Joe Biden defeated Donald Trump to become president-elect of the United States Saturday, capturing Pennsylvania’s 20 electoral votes and more than the 270 needed in the Electoral College to win the election.

As of late Saturday the final count continued in the Keystone State, but with about 98 percent of ballots tabulated, Biden led Trump by about 36,000 votes (.55 percent).

Biden’s margin of victory in Pennsylvania will remain relatively slim, but is likely to increase a bit as the final votes are counted, since most are mail-in ballots likely to favor the Democratic ticket. A small number of provisional ballots also remain to be counted.

A recount in Pennsylvania is only required if the difference in the final count is less than half of a percent.

Turnout was high for the 2020 election, with nearly 70 percent of eligible Pennsylvanians casting ballots, according to Bloomberg.

The Libertarian candidate, Jo Jorgenson, received 77,369 votes (1.15 percent), according to the most up-to-date results from state officials.

Biden’s win capped a tense four-day period in which the outcome of the race remained uncertain; a result of close vote totals in a number of battleground states and the fact that mail-in ballots take longer to count than votes cast in-person do.

More than 2.5 million Pennsylvanians voted by mail-in ballot in the election; a staggering statistic that can be attributed in part to the novel coronavirus, which is currently resurgent throughout Pennsylvania as well as most of the United States.

In the end and in spite of fears over their security, it was Pennsylvania’s mail-in ballots that propelled Biden to victory, with upwards of two-thirds of people who voted via the U.S. mail or by using drop boxes favoring the Democrat.

The Lehigh Valley played a crucial role in Biden’s Pennsylvania win, with both Lehigh and Northampton counties supporting him and the latter flipping from its support for Trump in 2016.

Similarly, Hellertown borough flipped from red to blue in the 2020 presidential election.

The Pennsylvania Department of State reported the following vote totals for the two counties that comprise the Lehigh Valley as of late Saturday:

In addition to Northampton and Lehigh, the Pennsylvania counties in which Biden won a majority of votes were Erie, Allegheny, Center, Dauphin, Lackawanna, Monroe, Bucks, Montgomery, Chester, Delaware and Philadelphia.

Shortly after Pennsylvania was called for Biden by the Associated Press and other major media outlets Saturday morning, he also was declared the winer of Nevada and its six electoral votes. The states that still had not declared a winner as of Saturday evening were Alaska (three electoral votes), Arizona (11 electoral votes), Georgia (16 electoral votes) and North Carolina (15 electoral votes). Except for Alaska, which Trump is expected to win, the other states are all within several percentage points of full counts.

Biden maintained a very small lead in Arizona (.64 percent) and Georgia (.19 percent), while Trump was ahead in North Carolina.

A native of Scranton, Biden has become just the second Pennsylvanian elected president, after James Buchanan in 1856.

Upon his inauguration Jan. 20, Biden will also become the oldest president to take office.

He turns 78 later this month.

“America, I’m honored that you have chosen me to lead our great country,” the president-elect said in a Facebook post accompanied by the song ‘America the Beautiful.’ “The work ahead of us will be hard, but I promise you this: I will be a President for all Americans–whether you voted for me or not. I will keep the faith that you have placed in me.”

The same message was shared on his Twitter feed:

America, I’m honored that you have chosen me to lead our great country.

The work ahead of us will be hard, but I promise you this: I will be a President for all Americans — whether you voted for me or not.

I will keep the faith that you have placed in me. pic.twitter.com/moA9qhmjn8

Both Biden and Harris barnstormed through Pennsylvania Monday, with Harris making a campaign stop at dive center Dutch Springs in Bethlehem Township, Northampton County, to help get out the area’s Latinx vote the following day.

Biden was expected to give a victory speech in his adopted hometown of Wilmington, Del., at 8 p.m. EST Saturday.

Meanwhile, Trump and his campaign had not announced any plans for him to concede the race and continued to threaten legal challenges, in spite of the fact that there have been no reports of voter fraud that would affect the outcome of the election.

Trump is the first president in a generation not to win a second term, the last president to serve just one term having been the late George H.W. Bush.

In addition to the 270 electoral votes needed to win the election, the Biden-Harris ticket captured the U.S. popular vote. As of Saturday night, the Democrats had received approximately 74.5 million votes (50.5 percent) to Trump’s 70.3 million votes (47.7 percent), according to the New York Times and other national and international news outlets.