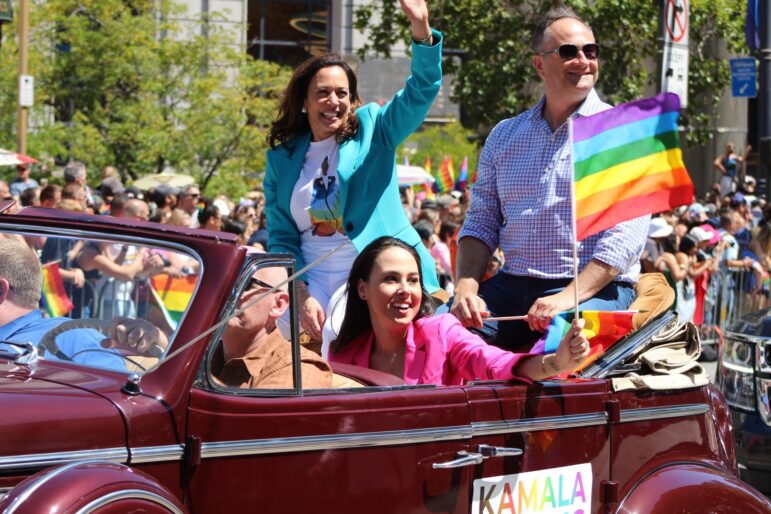 U.S. Sen. Kamala Harris (D-CA), pictured above with husband Doug Emhoff, will campaign in the Lehigh Valley Monday as part of a Get Out The Vote event focusing on the Latinx vote in the area. Recent polling indicates that support for Donald Trump by Latinx voters has held steady or increased from 2016 to 2020, with Latino men in particular favoring Trump for his economic policies and tough guy persona, according to an NPR report.

The Lehigh Valley will receive a visit from Democratic vice presidential candidate U.S. Sen. Kamala Harris Monday, according to information released by the Biden campaign.

Following a “canvass kickoff” event in Luzerne County at 11:20 a.m. Harris is reportedly scheduled to participate in a “Latino Get Out the Vote Drive-in Event, which is tentatively scheduled to begin a little after 1 p.m.

The event is supposed to be livestreamed at JoeBiden.com/Kamala.

The location for the event had not been announced as of late Sunday afternoon.

Pennsylvania was narrowly won by President Donald Trump in 2016 and is considered a battleground state in the 2020 election, with most polls giving Biden the edge here with less than 48 hours until Election Day.

TheHill.com reported this weekend that Trump plans to declare victory if he has an Electoral College vote lead Tuesday night, in spite of the fact that in several states like Pennsylvania, the final result won’t likely be known until millions of mailed ballots are counted.

Pennsylvania law does not permit ballots to be counted before Election Day, and efforts by some Democrats to change it to allow counting to begin earlier were thwarted.

Pennsylvania Secretary of the Commonwealth Kathy Boockvar (D) said a full count will take days because 10 times as many people have voted by mail this year as did in 2016, in large part because of concerns about voting in-person during the coronavirus pandemic.

In-person in Pennsylvania voting will take place from 7 a.m. to 8 p.m. Tuesday.

Anyone can vote for the candidates of their choice in Pennsylvania’s general election, regardless of party affiliation (if they have one).

Information about the election for Northampton County voters may be found here and on the county’s website.

Some Hellertown voters who formerly voted at the Saucon Valley Community Center on Northampton Street must now vote at Saucon Valley High School because the county discontinued the use of the community center as a polling station earlier this year.

The high school is currently closed to the number of coronavirus cases that have occurred among students there recently.

Individuals unsure about where to vote can find their polling place on the state’s website.