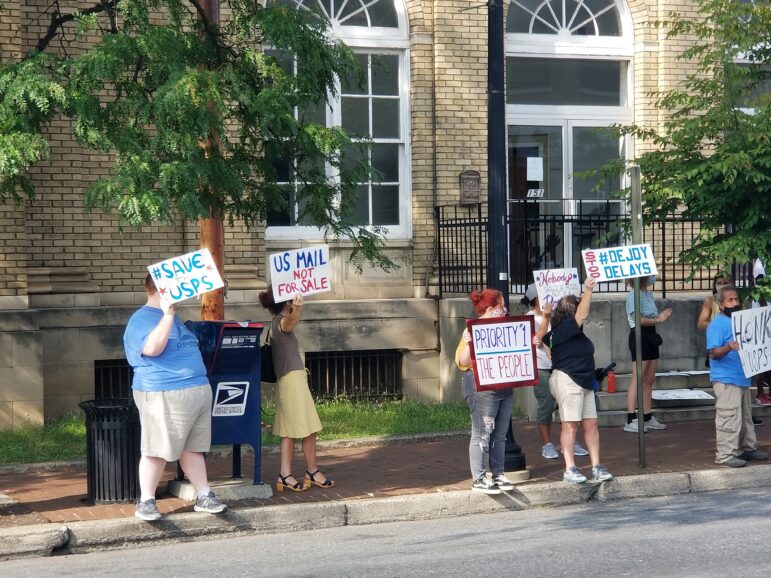 Protesters rallied in support of the United States Postal Service in front of the South Side Branch of the post office Tuesday.

The sidewalk in front of the United States Postal Service branch in South Bethlehem was the scene of a protest Tuesday; the second demonstration held outside the building in as many weeks.

Tuesday’s protest was organized by Democratic Socialists of America’s (DSA) Lehigh Valley chapter and Make the Road PA, and was part of a national day of action held in coordination with the American Postal Workers Union, according to a news release.

Lehigh Valley Area Local American Postal Workers union president Andrew Kubat stressed that although it is being portrayed by some politicians as an unprofitable failure, the postal service is not–and was never meant to be–a business.

“It was designed to connect everyone together, not to serve the needs of the rich or the corporations,” he told about 20 protesters who held signs and chanted in support of the USPS throughout the late afternoon event. The sight of the rally attracted support from numerous passing motorists, who honked their car horns in a sign of solidarity.

“Does the Air Force generate a profit?” Kubat asked. “Does the fire department? They’re services. They cost money.”

“The postal service is not in as bad shape financially as it could be,”he said. “In 2006 Congress mandated that we take $5.5 million per year to fund retiree benefits 75 years in advance, for people who weren’t even born yet, let alone hired. If you take that away, we are in the black. Ninety-two percent of the losses over the last 12 years are directly attributable to that mandate.”

Kubat noted that while the U.S. House of Representatives passed legislation last weekend to block the controversial cuts that have resulted in significantly slower mail delivery under Postmaster General Louis DeJoy, it is uncertain if the Senate will follow suit.

Even if it does, he said, President Donald Trump has vowed to veto the Democratic bill.

Trump, a vocal opponent of voting by mail, has been accused of putting DeJoy in power to restrict the ability of millions of Americans to vote by mail in November’s presidential election, after voting by mail was expanded in many states because of the coronavirus pandemic. That is something U.S. Rep. Susan Wild (D-15), who represents the Lehigh Valley in Congress, said a Congressional committee would be investigating.

DeJoy, who testified before the committee earlier this week, was defiant in telling Democrats that he will not reinstate the sorting machines that have been removed from post offices or reverse other cuts that have put the brakes on mail delivery.

Republicans have accused Democrats of promoting voting by mail in order to increase opportunities for the commission of election fraud, although little if any evidence has been presented to support that claim.

In response to increasing anxiety over mail-in voting in the lead-up to the 2020 election, some counties will make secure ballot drop boxes available to their residents this fall.

Northampton County officials said a ballot drop box will be located in the rotunda inside the county courthouse in Easton once ballots become available in mid-September.

Sheriff’s deputies will help to ensure that the box is secure. 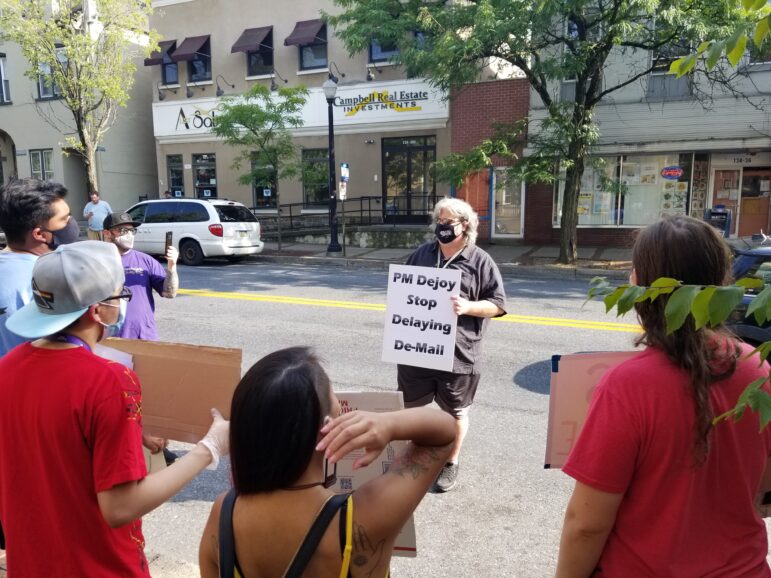 Lehigh Valley Area Local American Postal Workers union president Andrew Kubat addresses protesters outside the U.S. Post Office on W. Fourth Street in Bethlehem Tuesday. The rally was held in opposition to recent cuts that have significantly slowed mail delivery amid the COVID-19 pandemic and in the leadup to the 2020 U.S. presidential election. Voting rights advocates say the cuts instituted by Postmaster General Louis DeJoy are politically motivated and a threat to democracy. 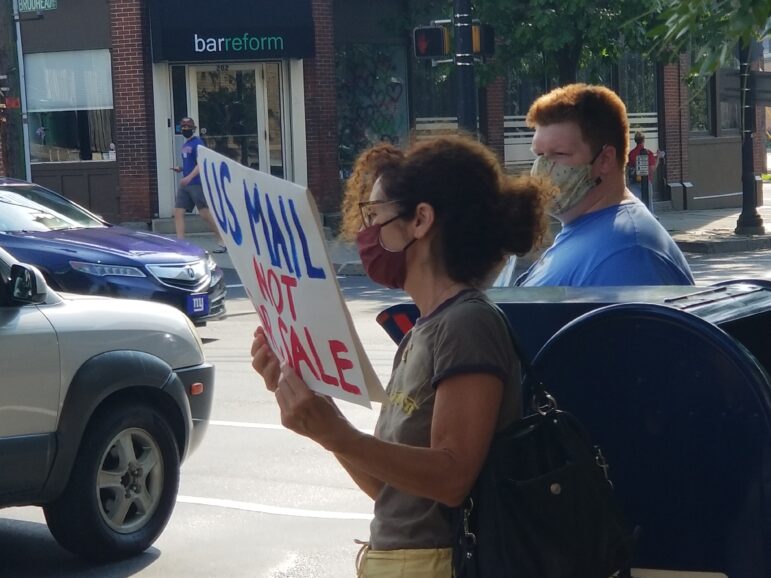 A protester holds a sign that says “U.S. Mail Not For Sale.” 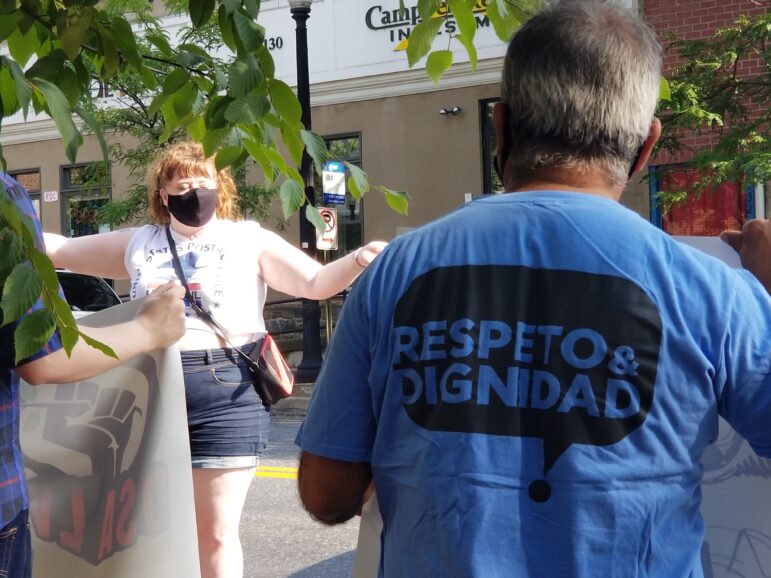 Other speakers at the protest talked about how the post office cuts are having a trickle-down effect. 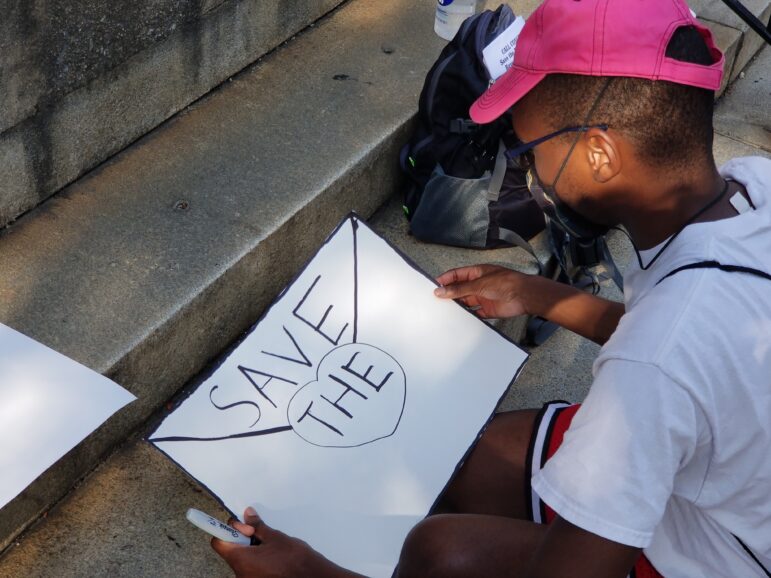 An attendee at the demonstration makes a protest sign in support of the United States Postal Service. 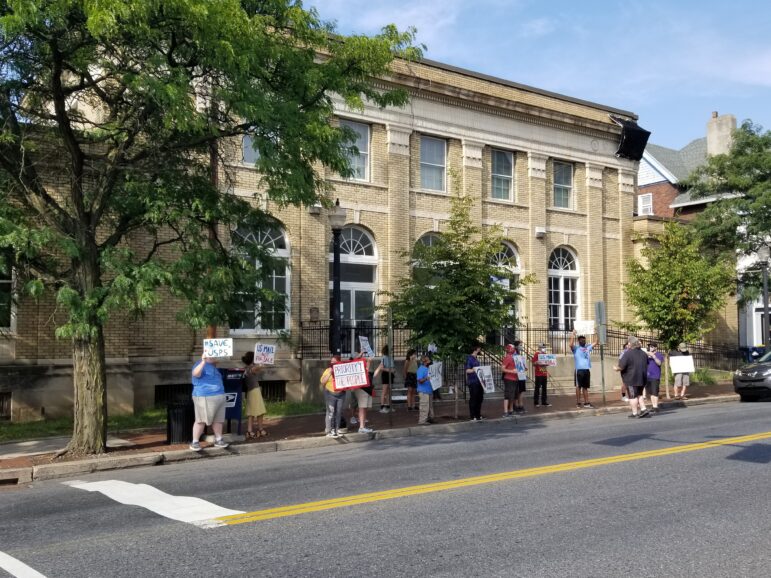 The post office branch on W. Fourth Street was itself on the chopping block of U.S. Postmaster General Louis DeJoy earlier this summer. At a news conference last week, State Rep. Steve Samuelson of Bethlehem told attendees it was DeJoy’s intent to slash the branch’s lobby hours from more than 40 hours a week to just 10. After pushback, the plan to reduce hours at the branch was abandoned. 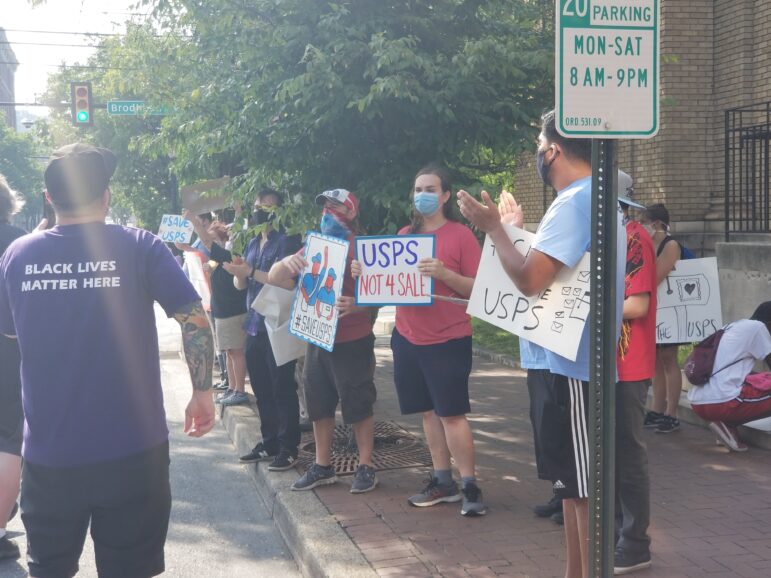 Protesters held signs that said things like “USPS Not for Sale” and “Priority #1: People.” 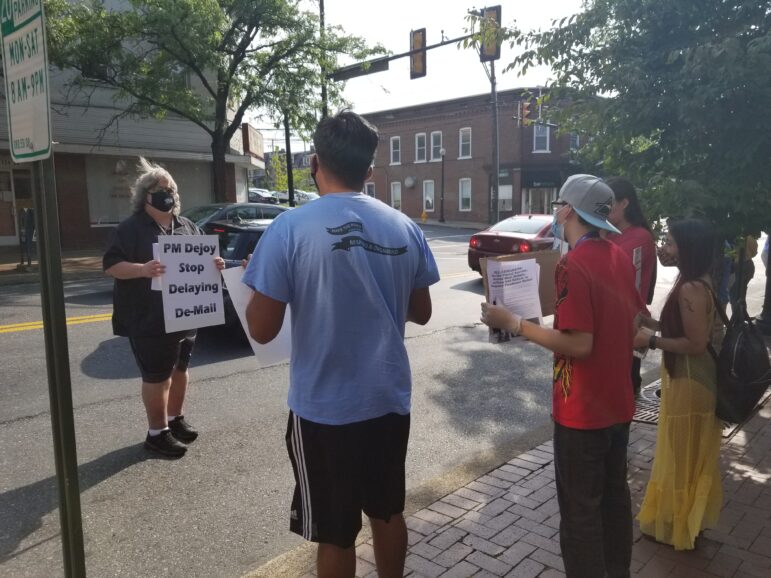 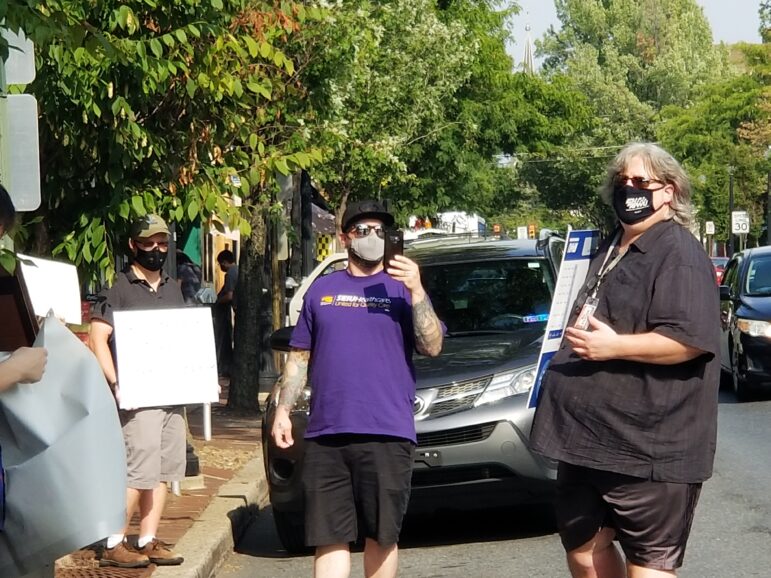 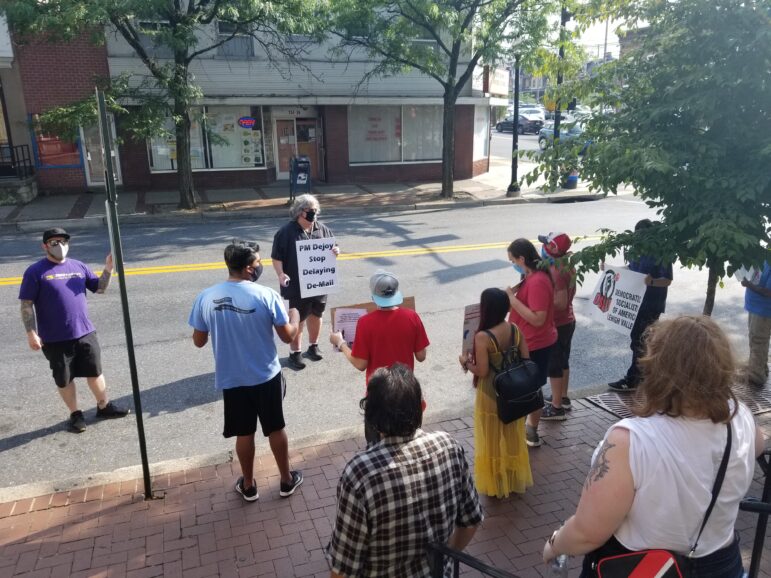