Spotlight PA is an independent, nonpartisan newsroom powered by The Philadelphia Inquirer in partnership with PennLive/The Patriot-News, TribLIVE/Pittsburgh Tribune-Review, and WITF Public Media. Sign up for our free weekly newsletter. 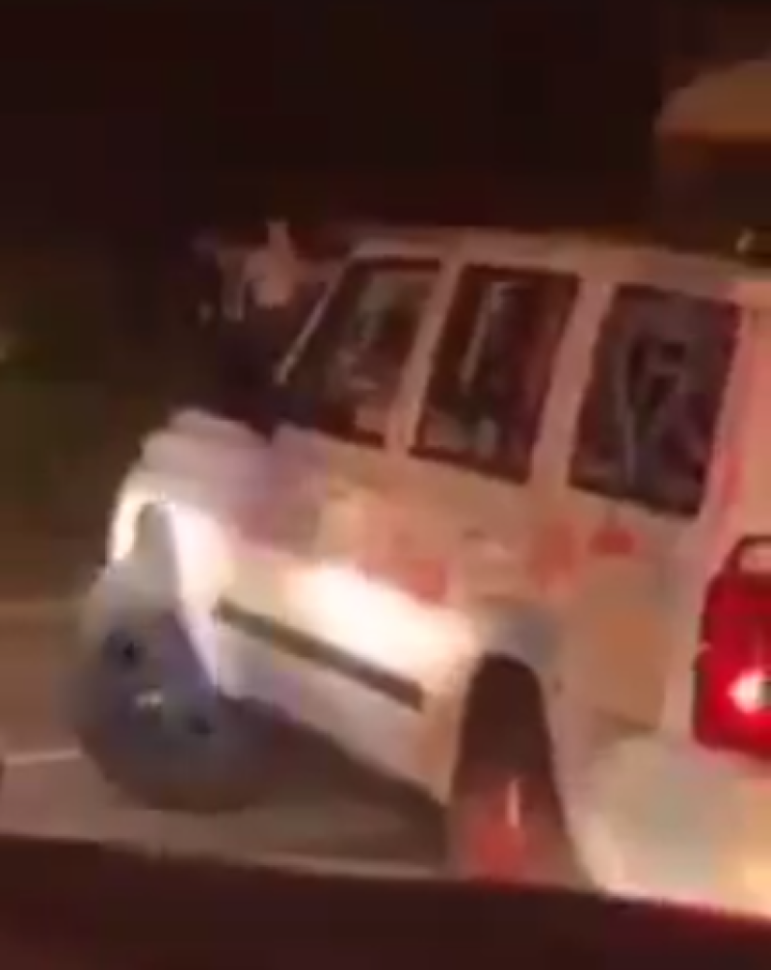 A screenshot from a Facebook live video of a shooting that involved civil rights marchers in western Pennsylvania.

Schellsburg, Pa. – The Pennsylvania State Police are investigating a shooting Monday evening involving two Bedford County residents and a group of civil rights activists on their way to Washington, D.C., one of whom was injured.

A caravan of about 50 activists were marching and driving from Milwaukee to the capital to arrive there on the 57th anniversary of the Rev. Dr. Martin Luther King Jr.’s “I Have a Dream” speech. They said that just before midnight Monday evening, a white man shot into the crowd as they gathered outside on Lincoln Highway in Juniata Township, approximately midway between Harrisburg and Pittsburgh.

Tory Lowe, one of the men marching, said they were about to climb a hill when a man appeared from behind them and started shooting at the group. A video of the shooting that was broadcast over Facebook Live reportedly shows the protesters gathered on the road before shots can be heard out of the camera’s range.

“We were about to start walking toward the hill; there was an incline coming up and we had parked to organize everybody,” Lowe said. “I don’t know, he came from almost a block away shooting. We didn’t even see it coming.”

A screenshot of the shooting posted on Facebook shows two men in front of a red and white truck, and one is holding a rifle. One marcher–a man known as Cino–was shot in the face, according to Lowe. He was treated and released Tuesday at Conemaugh Nason Medical Center near Bedford.

At a Tuesday afternoon news conference, state police said they had recovered a second weapon at the scene and did not rule out that it could belong to the protesters. When asked who fired the second gun, officials declined to speculate.

“There was an exchange of gunfire, and that’s all the amount of information we’re willing to release at this time,” State Police Lt. William Slaton said.

Speaking at the news conference, Tpr. Brent Miller, director of the Pennsylvania State Police’s communications office in Harrisburg, characterized what occurred during the altercation as follows:

The Pennsylvania State Police Troop G Bedford Station was contacted by a property owner on Monday, Aug. 24 at approximately 11:18 p.m. regarding a group of people in a private business parking lot. Troopers later learned the group was comprised of approximately 30 activists who were traveling on foot and in vehicles from Milwaukee, Wisc., to Washington, D.C. At approximately 11:35 p.m., at the same location, and before state police arrival, the property owners confronted the activists. The confrontation escalated and gunshots were exchanged between the property owners and the activists. One of the activists was struck by birdshot from a shotgun. The man was treated and released from the Conemaugh Memorial Medical Center. That’s located at 1086 Franklin Street in Johnstown, Pa. A shotgun, shotgun shells, a semiautomatic pistol and 9mm casings were all recovered at the scene. The Troop G major case team is currently investigating in collaboration with the Bedford County District Attorney’s office. Also here with me today is the Pennsylvania State Police Heritage Affairs Section Commander Lt. William Slaton. They are involved directly with the activist groups and are reaching out to them currently, and are assisting in the investigation.

While the marchers said on social media that the shooting felt racially-motivated, Slaton said that “no one is insinuating that this situation here had any type of hate or racial animus to it.”

In a news release from earlier Tuesday, state police said the shooting was sparked by “an argument, which culminated in gunfire.” According to a report from WTAJ, a property owner had repeatedly asked the marchers to leave, but they refused.

Lowe disputed the contention that there had been an argument.

”It was no argument,” he said. “The video is proof. We weren’t arguing with anyone. He came out shooting off the top, never was an argument. Matter of fact we were walking when he started shooting.”

After the man shot his gun into the crowd, Lowe said, he yelled at the shooter that a minister was with him. Lowe said the shooter then put down his gun, started talking about Jesus and then tried to shake his and the minister’s hands.

“After that, he acted like nothing ever happened,” Lowe said. “He just got to talking about us and shaking our hands and ‘God Bless You.’”

As of late Tuesday no arrests had been made and no charges had been filed.